Borneo is a huge island with an incredible number of outstanding hiking areas. Here is a round-up of ten of the finest mountains that can be hiked in Borneo, whether in Malaysian Sarawak and Sabah or Indonesian Kalimantan. There’s also some additional information on a few of the island’s most notable natural landmarks and some of the really remote and currently obscure peaks that may become popular over the next few decades. 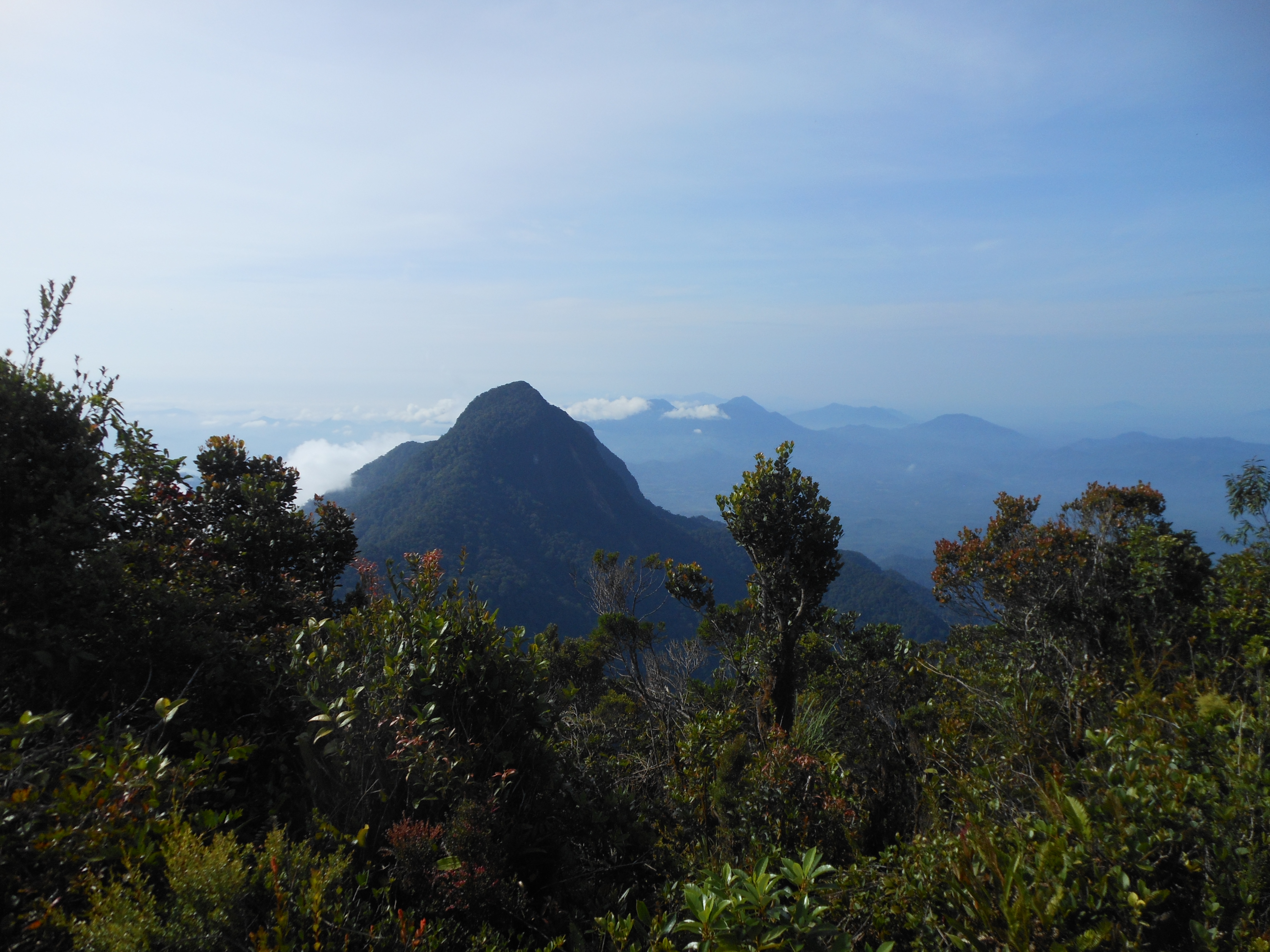 ‘Onion Mountain’ is probably the most accessible hike of any great significance in West Kalimantan. Despite being less than 1500 metres high, the mountain has a huge amount to offer adventurous hikers including gorgeous rivers, pristine forests home to hornbills, pitcher plants, black orchids and all manner of creepy-crawlies plus stunning, panoramic views from the summit. One of the easier mountains to ‘bag’ in Borneo, Gunung Bawang remains relatively unknown to hikers outside of the province. Read more 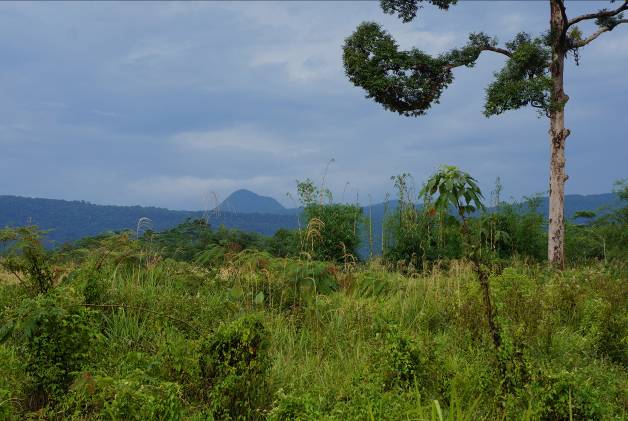 This peak gives its name to the Gunung Niut Wildlife Reserve which can be reached by public transport from Pontianak. Take a bus to Dawar via Sanggauledo. From Dawar it is about 10-12 hours of hiking to the summit so it’s best to camp at a spot at 1,290m (which is about 90 minutes before the summit) then get up early on the second day to reach the top for first light. The highest point is marked with a cement pillar and the best views are to be found about 20 metres below this point. Sadly, the authorities recently closed this one to anyone but scientific researchers but let’s hope they see sense in the near future. Read more 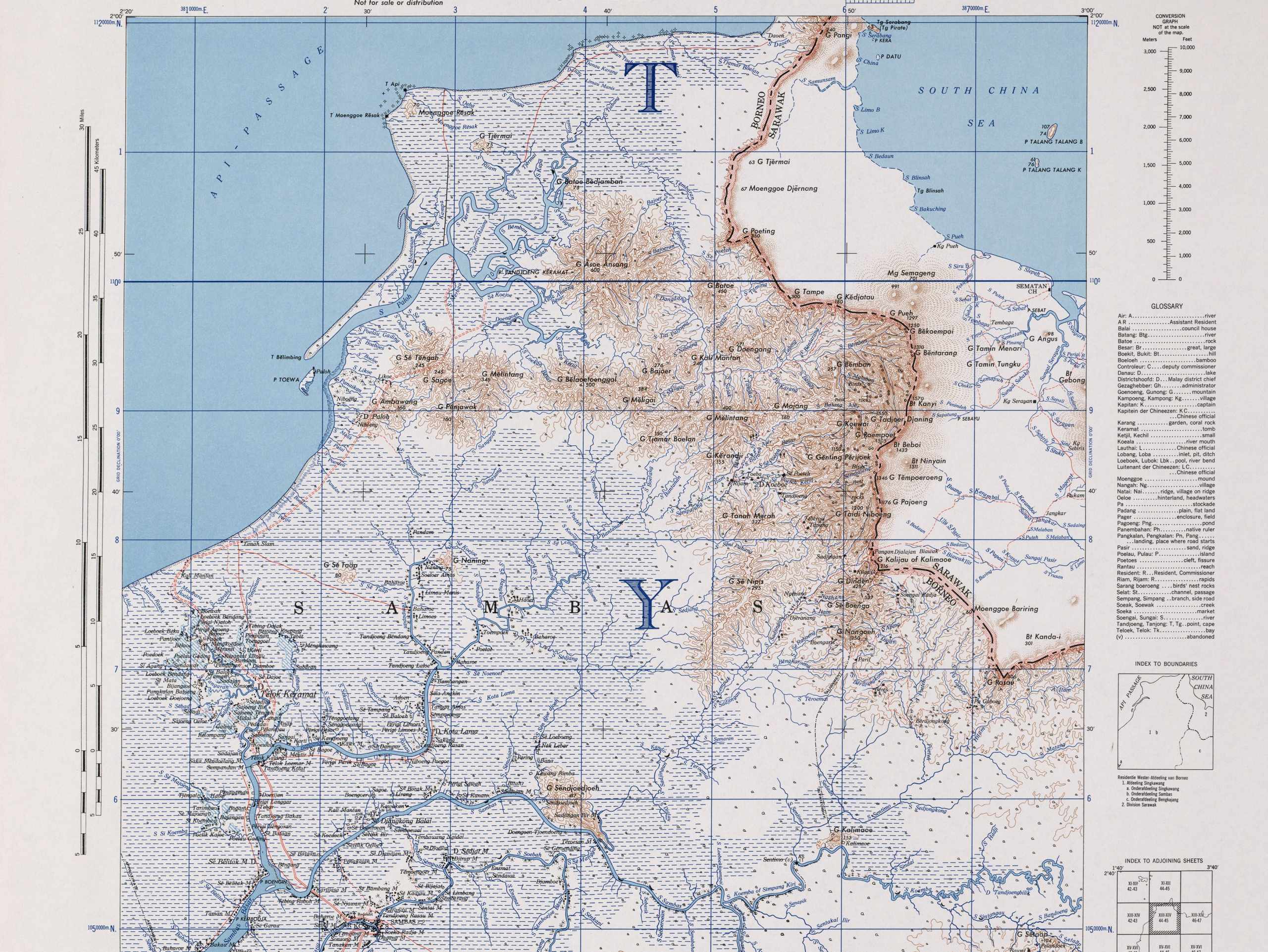 This large mountain range is on the border of Malaysian Sarawak and Indonesian West Kalimantan and recently became a National Park on the Malaysian side. It is an extensive, long ridge with various different peaks, the highest of which is apparently Gunung or Bukit Kanyi. Researching this range is quite difficult, as it has so many different names from all of the different peaks. Gunung Bagging will be heading there in October 2018 to make a full report. Read more 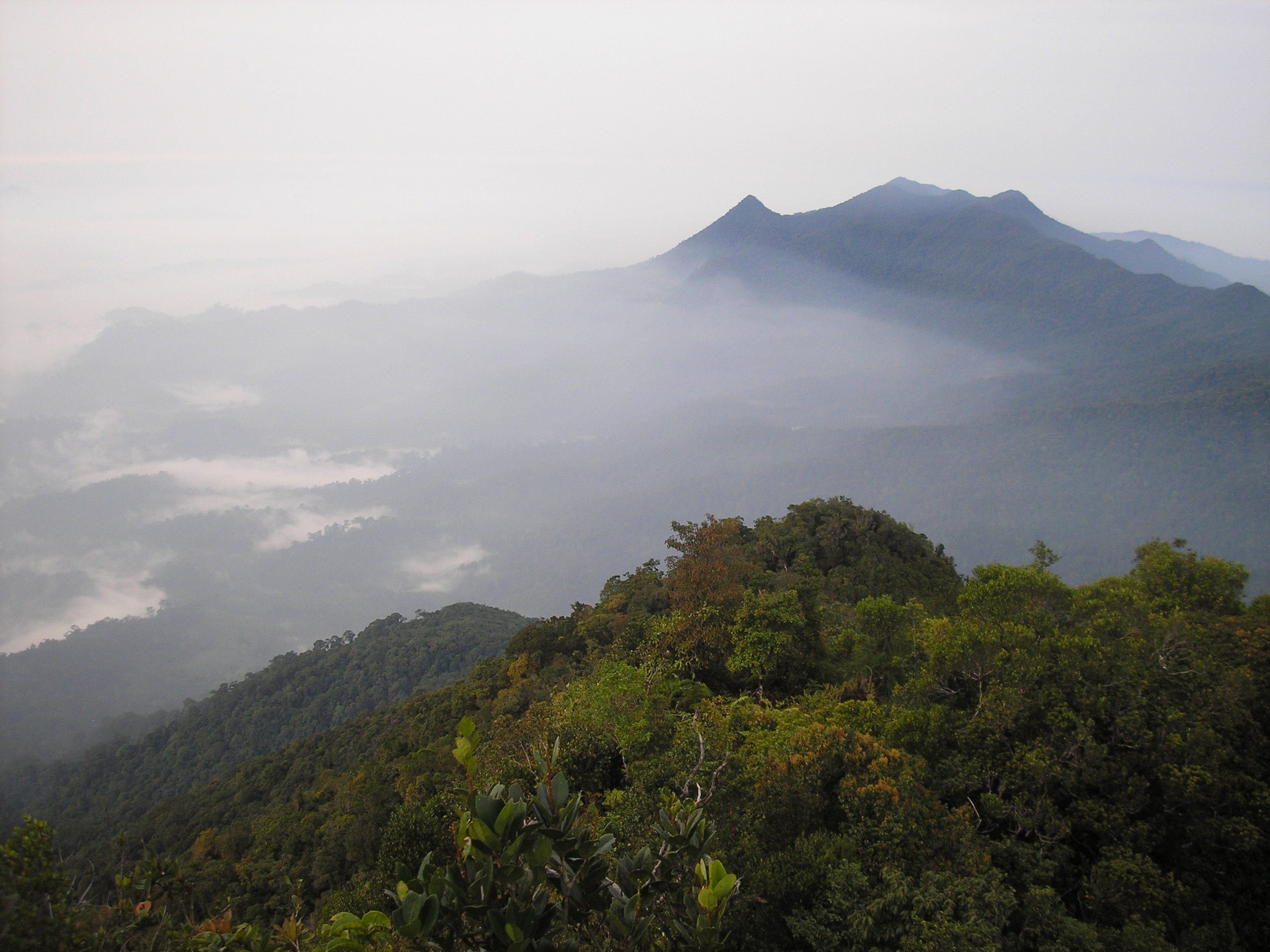 Gunung Besar (Halau Halau) is the highest peak in the Meratus mountain range and the highest peak in South Kalimantan. Being relatively close to Banjarmasin, it is also one of Kalimantan’s most accessible Ribus. Even better, it is quite unlike most other jungle-clad peaks in Borneo because the summit actually offers fabulous views over the surrounding forests. It is climbed on at least a monthly basis so it is a well-trodden but still clean and wild trail. Read more 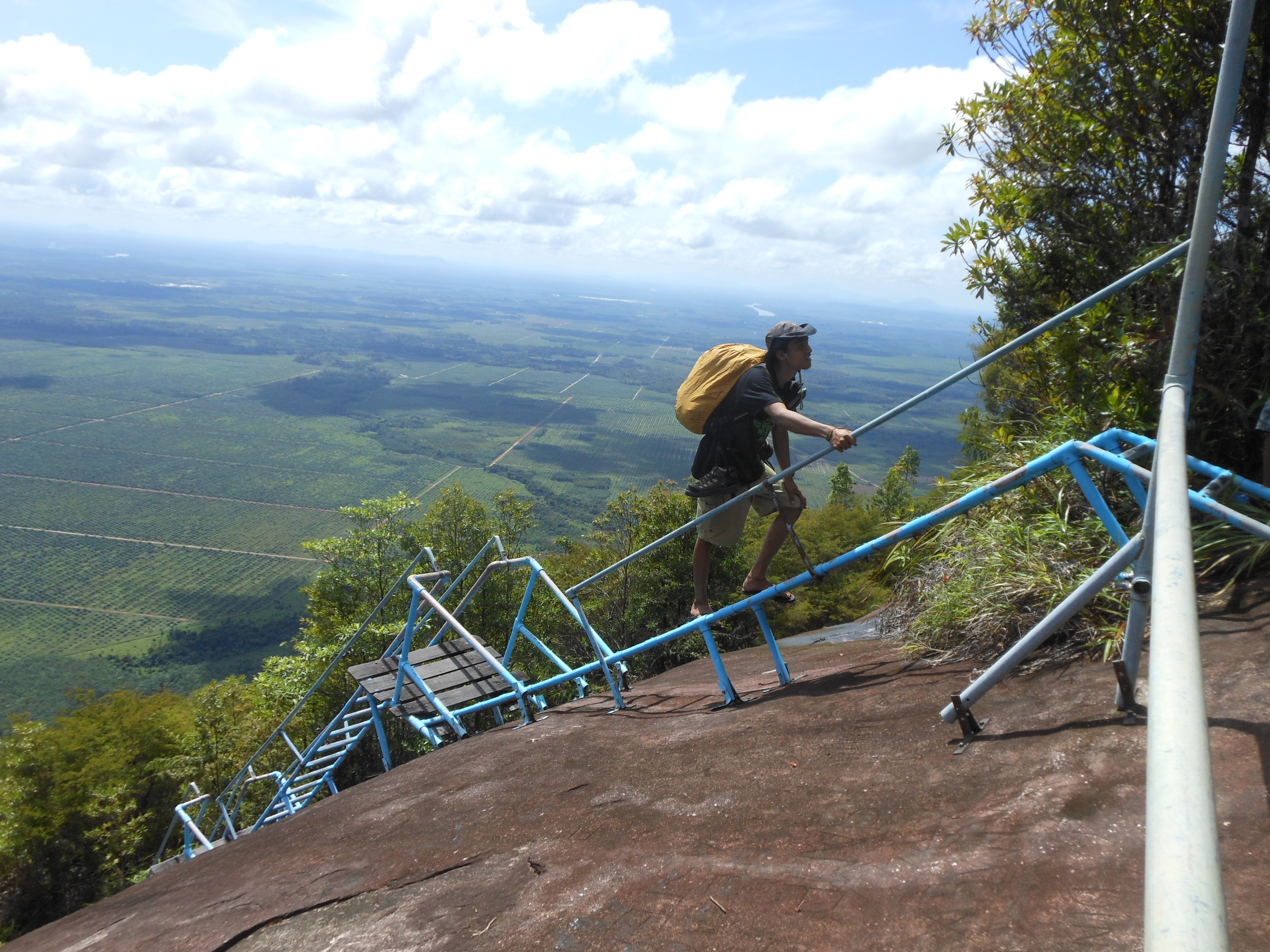 Gunung Kelam is a huge granite dome near Sintang in central West Kalimantan province. It was first written about by German botanist Johannes Gottfried Hallier in 1894. He was the second European to climb it, after a Dr. Gürtler, and reached the summit ridge on five occasions between January 30th and February 13th 1894. Of particular interest to him was the large number of pitcher plants (Nepenthes). Kelam is a striking mountain from many angles both because it is an immense Ayers Rock-esque boulder and because the surrounding land is mostly very flat, with just a couple of minor hills to the northeast. Read more 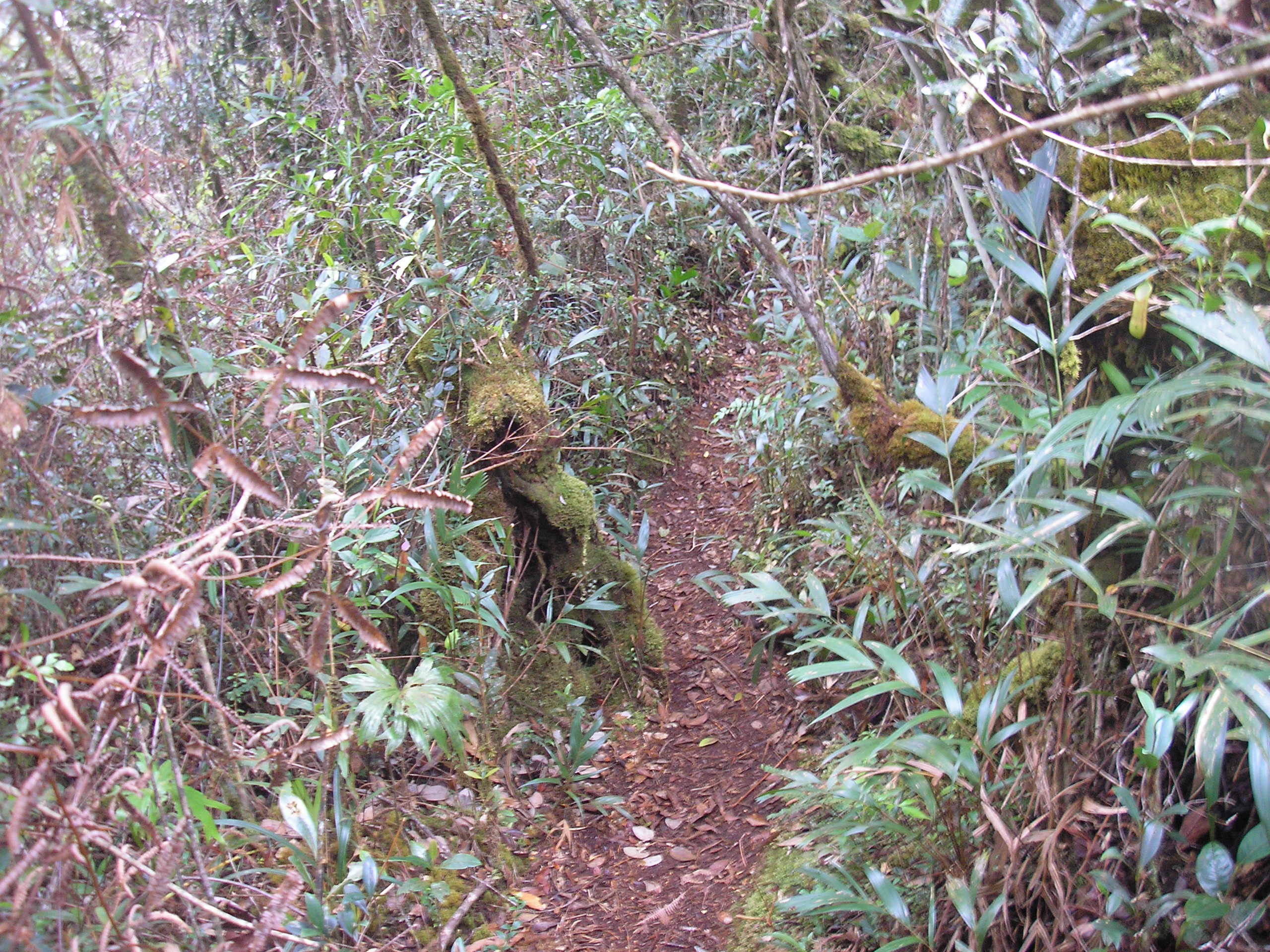 Trusmadi is the second highest peak in both the island of Borneo and the country of Malaysia (after Kinabalu). It offers a very different kind of trek to Kinabalu – you probably won’t meet many other hikers on the narrow, overgrown and muddy trail. Despite its lesser elevation, Trusmadi (or ‘Trus Madi’ as it is also written) is said to offer the most beautiful dawn view in Malaysia. Why is this? It’s because Kinabalu can be seen to the north-east as the sun rises over Borneo so it really is a remarkable viewpoint well worth all the effort. Read more 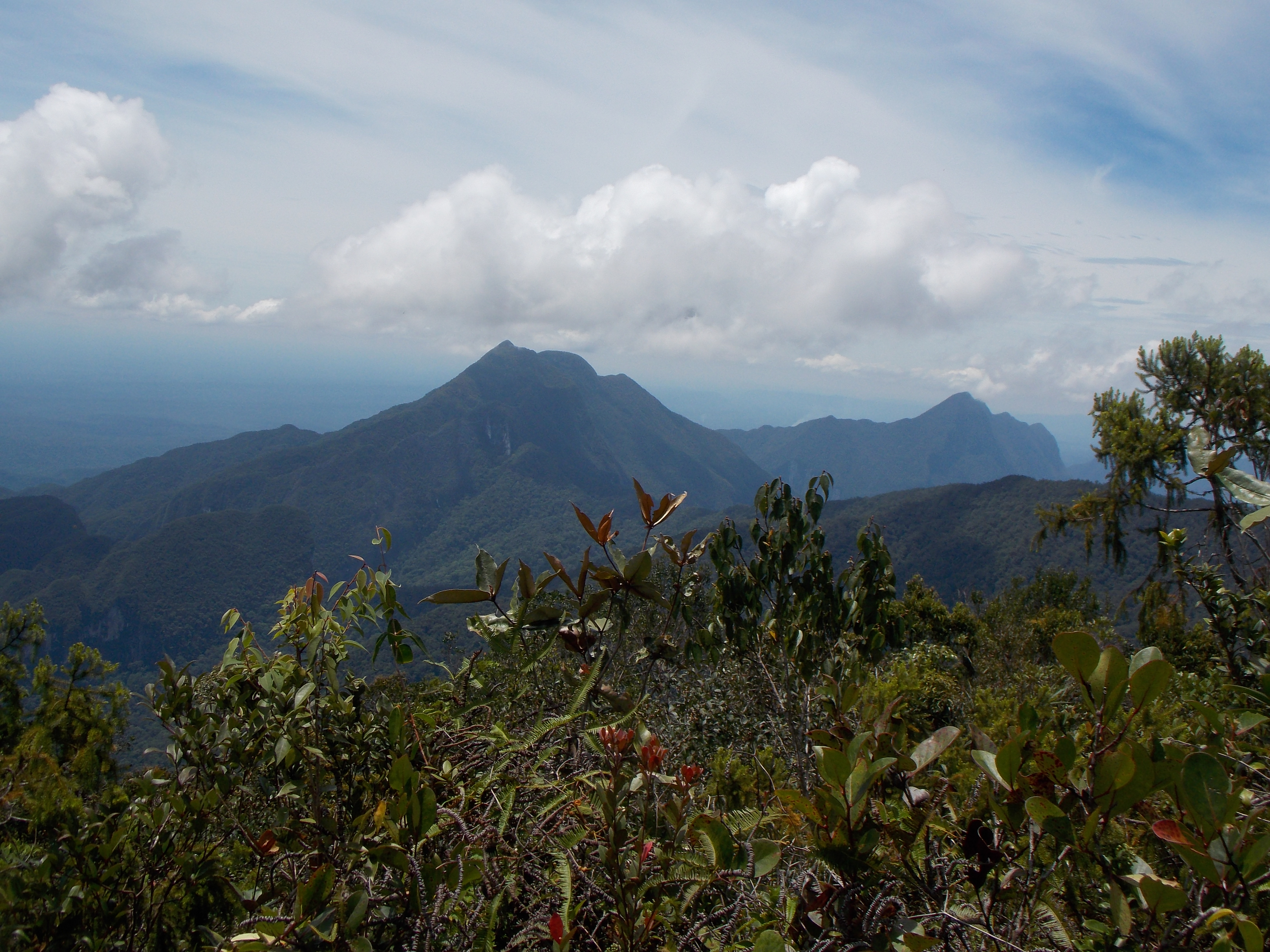 This mountain is the highest peak in the Gunung Mulu National Park which was declared a Unesco World Heritage site in 2005. Several attempts were made to reach the summit in the 19th century, notably by Spenser St John and Charles Hose. The first person to reach the summit was a rhino hunter named Tama Nilong who ‘discovered’ the south-west ridge in the 1920s. In 1932 Tama Nilong led Lord Shackleton and an Oxford University Expedition to the summit and the very same route is still used today. Mulu Park is perhaps the number one tourist attraction in the entire province of Sarawak, so it may come as some surprise that the summit is reached perhaps only five times per year – usually by avid hikers or scientific researchers. Read more 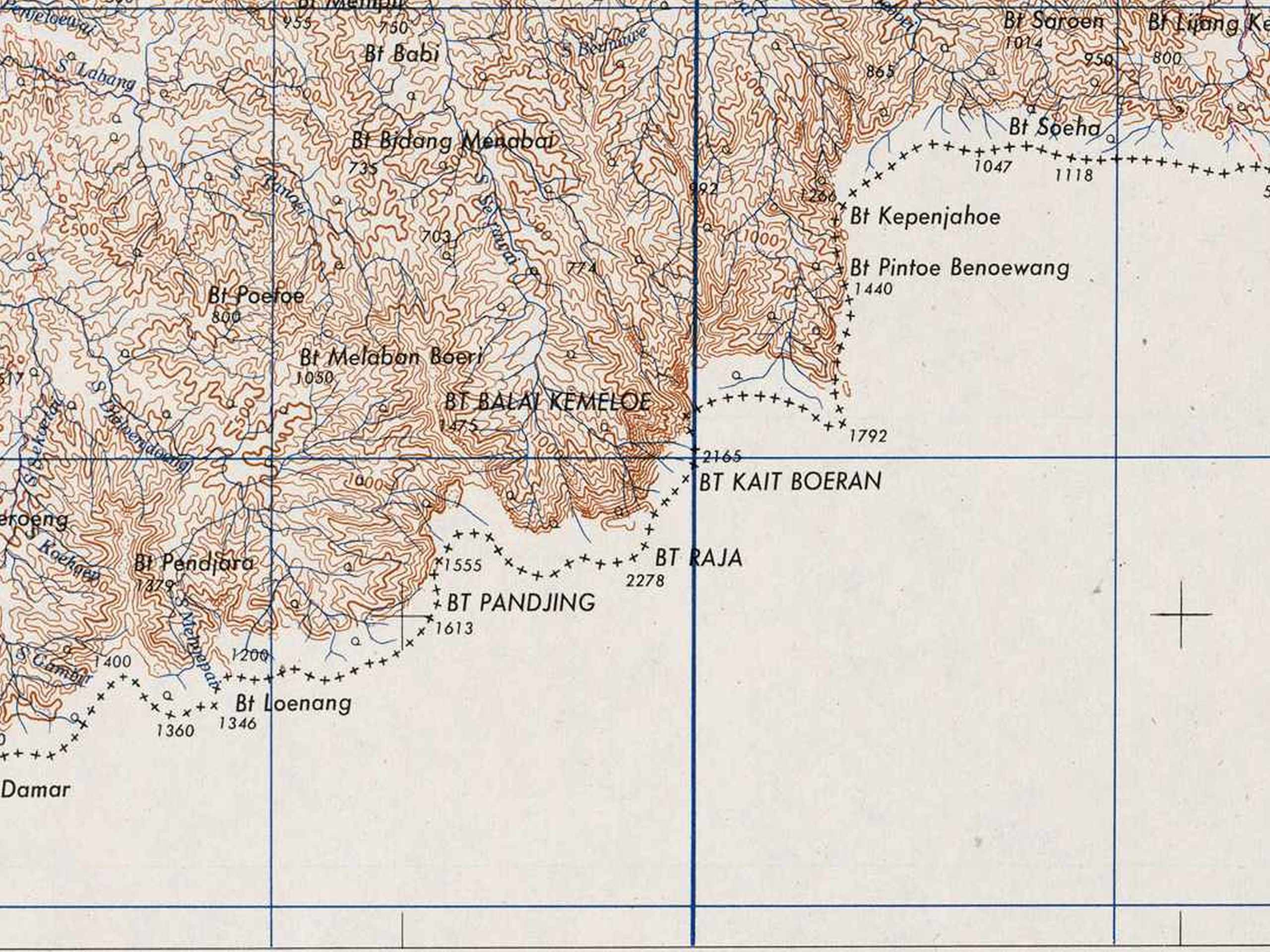 This mountain is the highest peak in the Schwaner range and indeed the highest peak in Kalimantan (Indonesian Borneo). The summit is known locally as Puncak Kakam. It is located in the Bukit Baka Bukit Raya National Park. All in all, including transport starting and ending in Pontianak, you will need nine or ten days to complete this expedition. Gunung Bagging will be heading there in August 2018 to make a full report. Read more 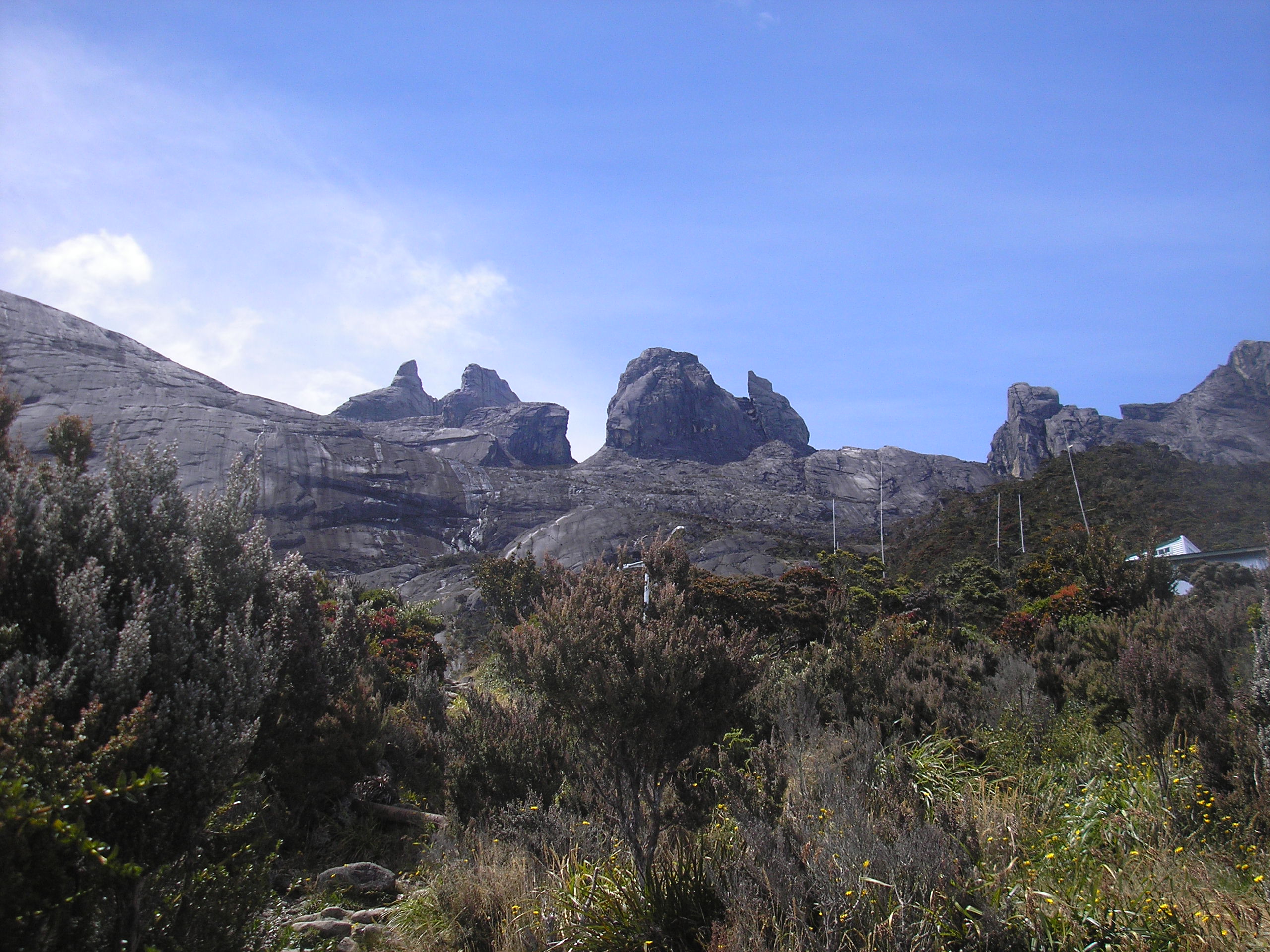 The highest point on the island of Borneo, Kinabalu is probably the most popular hike in Southeast Asia. It is a truly stunning mountain – crowned with various glistening granite peaks and spires. Besides the great beauty of the mountain itself, its popularity is also due to its height, its accessibility from nearby Kota Kinabalu and also because it is well-publicised and information is far more readily available online than for Indonesian peaks of a similar height. Most people climb to the peak for dawn on the second day, and at 4,095m it gets very cold so remember to take lots of warm clothing. Sadly, there are a number of administrative hurdles which need to be dealt with. First and foremost, the mountain is ‘owned’ by Sutera Sanctuary Lodges, a luxury holiday accommodation corporation. In conjunction with the National Park authority, Sutera Sanctuary Lodges has a monopoly on access to the mountain. Read more 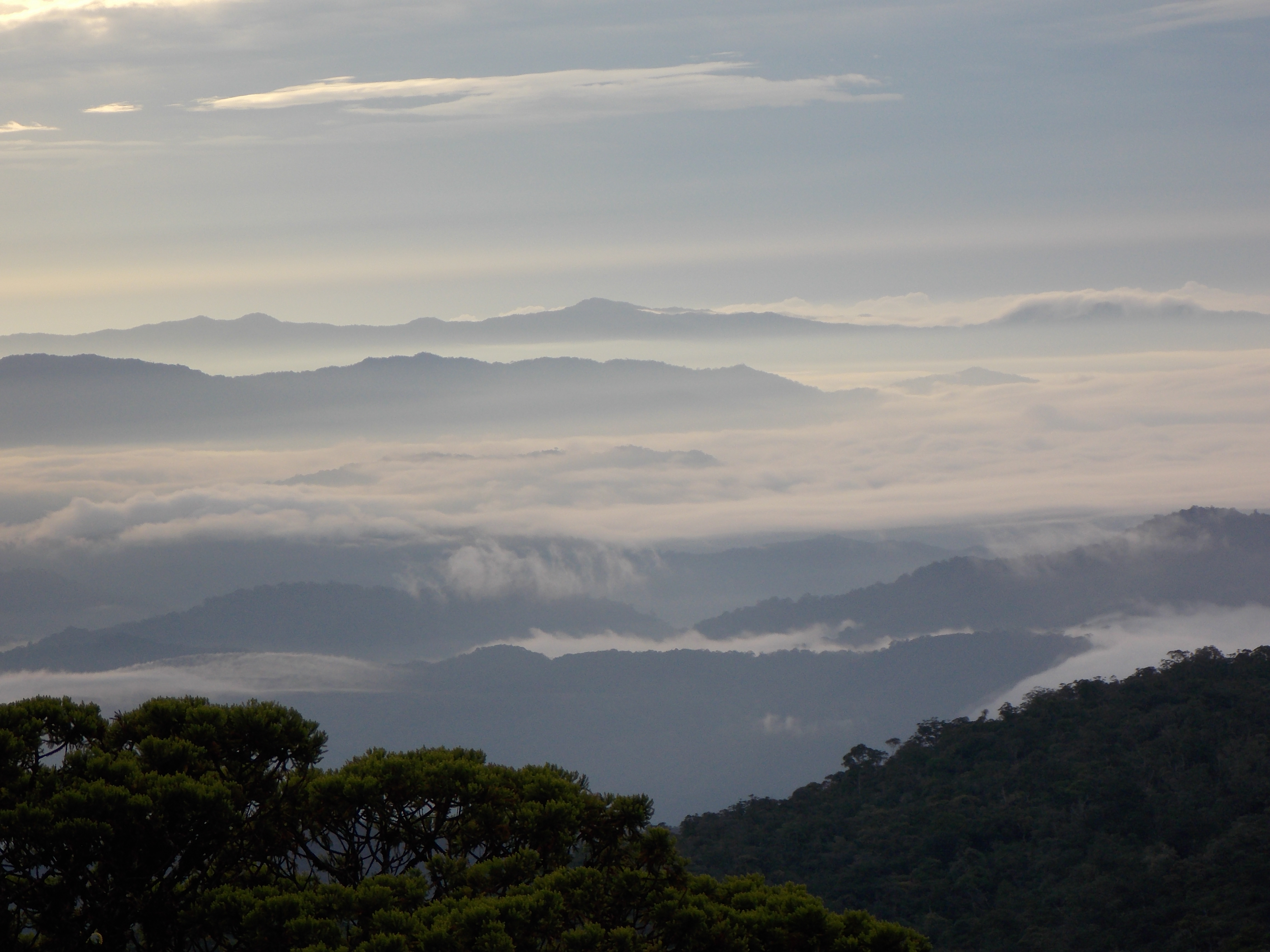 Mount Murud is the highest peak in the Kelabit Highlands and, indeed, the highest peak in Sarawak. It is part of the recently-created Pulong Tau National Park although at present there are no significant Park facilities or anywhere near as many travellers as you would encounter in Mulu National Park. However, with incredible flora and fauna, stunning rock formations, unbelievable panoramic views, and ample shelters to make carrying a tent with you quite unnecessary if you hike from Ba’kelalan, this is one of the finest hikes in Borneo, if not the entire Malay archipelago. Read more 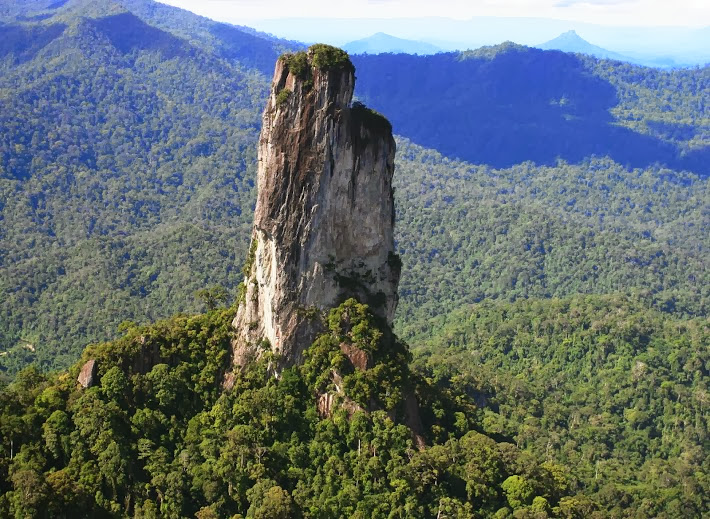 Puruk Sandukui is incredibly difficult to get to – it takes several days from the nearest city of Palangkaraya. This may explain why there are so few images of it available online. Apparently, a team of students from Universitas Indonesia climbed it in August 2017! If Puruk Sandukui was better known, it would perhaps be one of the most celebrated natural landmarks in Southeast Asia. Read more 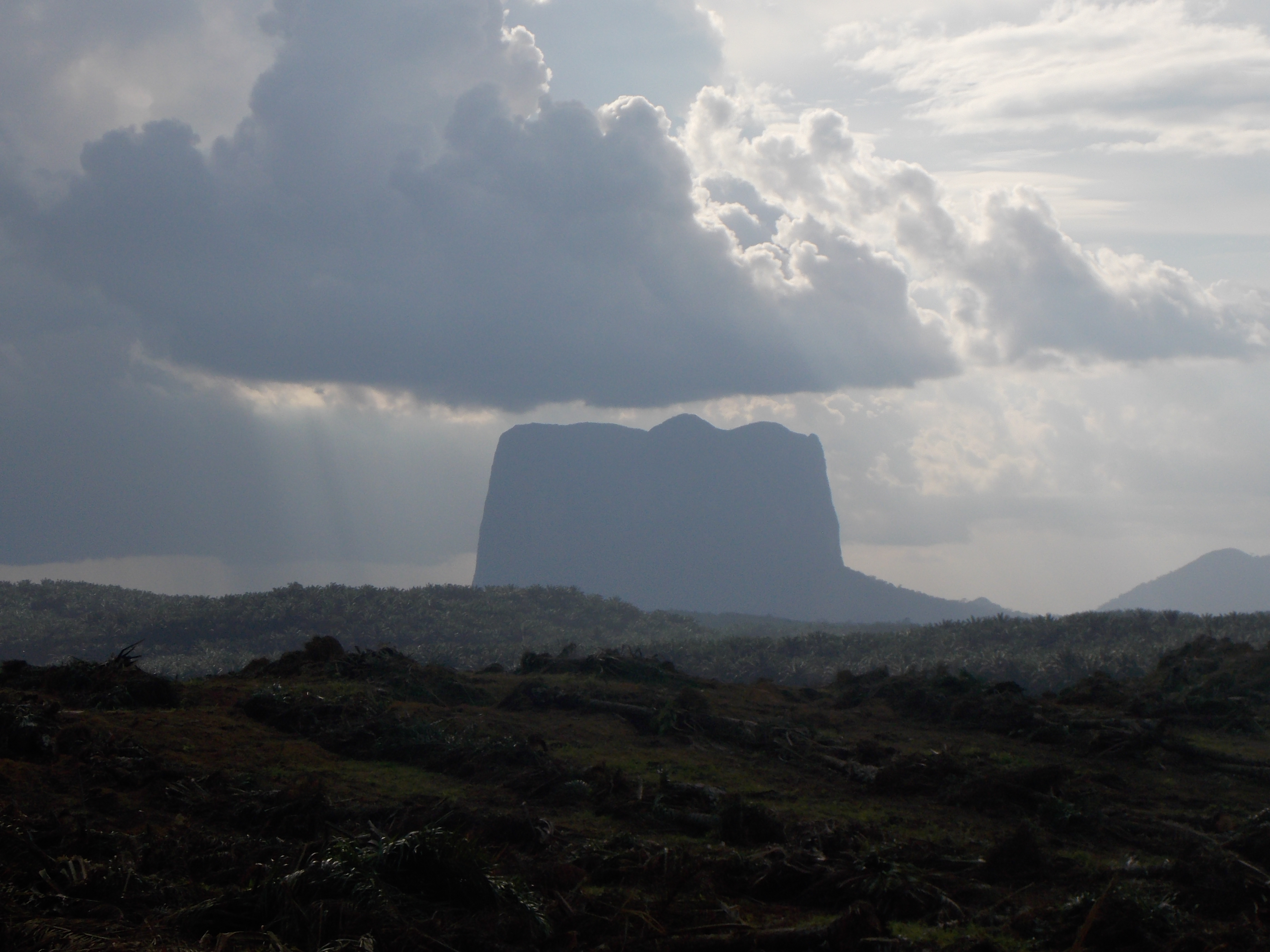 Batu Daya is one of the most iconic mountains in Indonesia but very few people know of its existence. Along with Gunung Kelam (also in West Kalimantan), Puruk Sandukui (Central Kalimantan) and the huge Merabu and Gunung Kulat karst region in East Kalimantan it is an area which is bound to become a major natural tourist attraction in the next couple of decades, particularly if local infrastructure improves. At present, other than oil palm plantation workers, well-read local nature lovers, and international rock climbers very few people seem to know about it. Batu Daya can be seen on flights between Ketapang and Pontianak, and sometimes on descent or ascent to/from Pontianak in clear weather but is totally invisible to users of the Trans-Kalimantan highway which passes within about 25km of it near Sandai. Read more 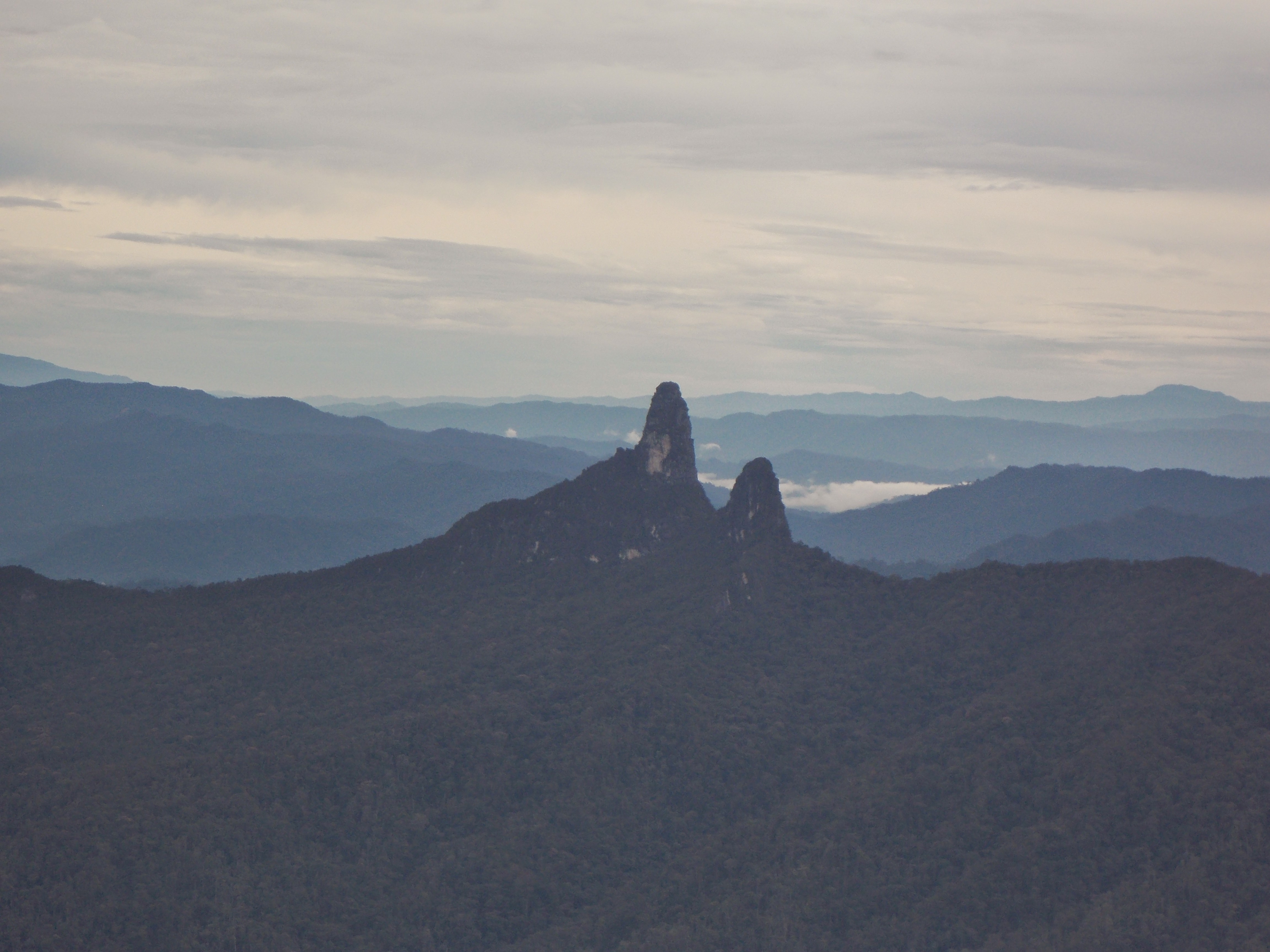 The impressive husband-and-wife peaks of Batu Lawi are usually first seen by people flying to the Kelabit Highalnds town of Bario in the tiny 19-seater MASwings planes from Miri. The base of the cliffs can be hiked to from Bario in a multi-day trip, or seen from the higher slopes of nearby Gunung Murud, the highest mountain in Sarawak. Only expert rock climbers should attempt the tallest peak which was first successfully climbed in 1986.

Other mountains that remain largely unknown:

1.There is very little on Gunung Liangpran, East Kalimantan‘s highest peak at around 2,240m. This is the third-highest peak in Kalimantan (the Indonesian part of Borneo island) and it is possible that nobody has reached the summit yet.

2. At around 2,250m, Batu Jumak is the highest mountain in North Kalimantan and the second highest peak in the whole of the Indonesian part of the island of Borneo, though there is almost no information on it and it too may never have been climbed.

3. Gunung Kujat is another mysterious mountain in North Kalimantan that will probably require an expedition of ten days or more.

4. The currently un-named (at least on our maps) North Kalimantan Peak 2219 is yet another in this region of Kalimantan that there is barely any information on. It’s approximately 2,219m high and located in North Kalimantan (hence the temporary name on the Gunung Bagging website!) but that is about all we have at the moment!