Trusmadi is the second highest peak in both the island of Borneo and the country of Malaysia (after Kinabalu). It offers a very different kind of trek to Kinabalu – you probably won’t meet many other hikers on the narrow, overgrown and muddy trail. Despite its lesser elevation, Trusmadi (or ‘Trus Madi’ as it is also written) is said to offer the most beautiful dawn view in Malaysia. Why is this? It’s because Kinabalu can be seen to the north-east as the sun rises over Borneo so it really is a remarkable viewpoint well worth all the effort.

In years gone by, Trusmadi was a serious expedition that required several nights of camping just to get onto the summit ridge. It has been even described as tougher than Kinabalu because of the terrain. However, since 2009 Sabah authorities have been trying to publicise Trusmadi so that more hikers visit its interesting slopes. This means that access is a lot easier now because there is a forestry road leading to within 5 kilometres of the summit. There are also plenty of signs – both maps of the area and actual distance markers every 100 metres on the trail itself. Unfortunately, you still need to request a permit from the Sabah Forestry Department at least 2 weeks in advance and a 4WD vehicle is necessary to get access to the starting point at 1,600m. You also have to take a member of Park staff with you. This means that, somewhat annoyingly, climbing Trusmadi can be even more expensive than climbing Kinabalu!

First you need to get to Tambunan. This small town lies in the heart of the Pegalan Valley, about 2 hours drive over the scenic Crocker Range from Kota Kinabalu. From Tambunan you should already have arranged 4WD and permits to grant you access to the mountain and actually get you to the starting point. Until recently, the mountain was climbed from Kampung Kaingaran. However, the newer route means that you can start at Taman Kitingan (1,627m) which is just 4900 metres from the summit. It doesn’t sound like a lot but you will be exhausted after 5 hours of clambering over muddy logs blocking the often overgrown trail! There are lots of ascents and descents on the trail too, so it’s not as simple as gaining the 1000 metres elevation. The first section of the trail is easy and straightforward but it gets tougher near the top.

One of the most interesting things about Trusmadi is the large number of critically endangered pitcher plants that grown on its overgrown summit ridge. One species is actually endemic to the mountain and is named after it. The pitcher plants are to be found from an elevation of 1,900m all the way to the summit and they get larger and larger as you get higher and higher. There are also Rafflesia in the area, but they are more likely to be seen at the foot of the mountain. In sunny weather you may well see the largest butterfly in the world – Rajah Brooke – and large leopards have occasionally been spotted by forestry rangers but only on the lower slopes.

There are several rest shelters on the trail, most of which have toilet facilities and water available – after less than a kilometre you will have reached Taman Ali Hassan (1,795m), another kilometre is Taman Sulaiman (2,014m), and another 500 metres is the smaller Gombunan Hut (2,148m). After the Gombunana Hut, the trail gets a little more interesting because if you have fine weather you will be able to look along the narrow ridges of Trusmadi. The next post is called Taman Bunga (2,358m). According to the friendly ranger, this used to be a very nice spot but now all that remains is a tiny metal blue shelter the size of a doll’s house that even babies would have difficulty clambering into! This section of the trail features several aluminium ladders, not all of which are stable so take extra care.

After Taman Bunga, the trail descends steeply on a narrow section of the ridge. You need to use the ropes provided. In good weather, you should be able to see the summit area ahead. There is a section here known to rangers at the Big Rock (2,391m) where you climb over a rock on an enjoyably narrow section of the ridge. About 20 minutes beyond Taman Bunga is the Gibon Cabin (2,400m), a half-finished hut complete with toilet, water, small cooking facilities and about enough space for 14 people to sleep. Unfortunately it can be a very chilly place and the sleeping places are incredibly uncomfortable even with a sleeping bag and mat. The summit is about 90 minutes further, so if you have a tent it might be better to continue up to the top and camp up there. There used to be gibbons spotted occasionally near the Gibon Cabin, but they seem to have left the area since the building was constructed.

The trail between Gibon Cabin and the summit is the toughest section – lots of logs cross the trail and you need to use both your hands in many places. It can be incredibly frustrating but there are plenty of pitcher plants to keep your interest up. After an hour or more of very tedious hiking, you will reach a tower – a radio repeater. The trail turns sharp left here towards Jiran Point. Jiran Point is only a couple of metres lower than the true summit but the views of Kinabalu are said to be the finest here.

20 minutes further along the summit ridge is the true summit – Samadi Point – named after a local hunter who was the first man to climb the mountain. This area is cluttered with signs, a cement trig pillar, a Malaysian flag and a flimsy metallic structure. Hopefully the views will more than justify the somewhat hard-going trail and you will be more than rewarded.

You can be back at the starting point in about 4 hours.

The mountain can also be hiked from Sinua (620m) to the south-east. The trail leads via Lanting Sosodopon bridge (670m), Lanting Mamai Roy bridge (725m) and then over numerous stream crossings. Camp 2 (1,866m) is the favoured spot to spend the night and has a water source. Beyond Camp 2 is Timpak Amin (2,395m) and Timpak Munang (2,555m) before the summit is finally reached. 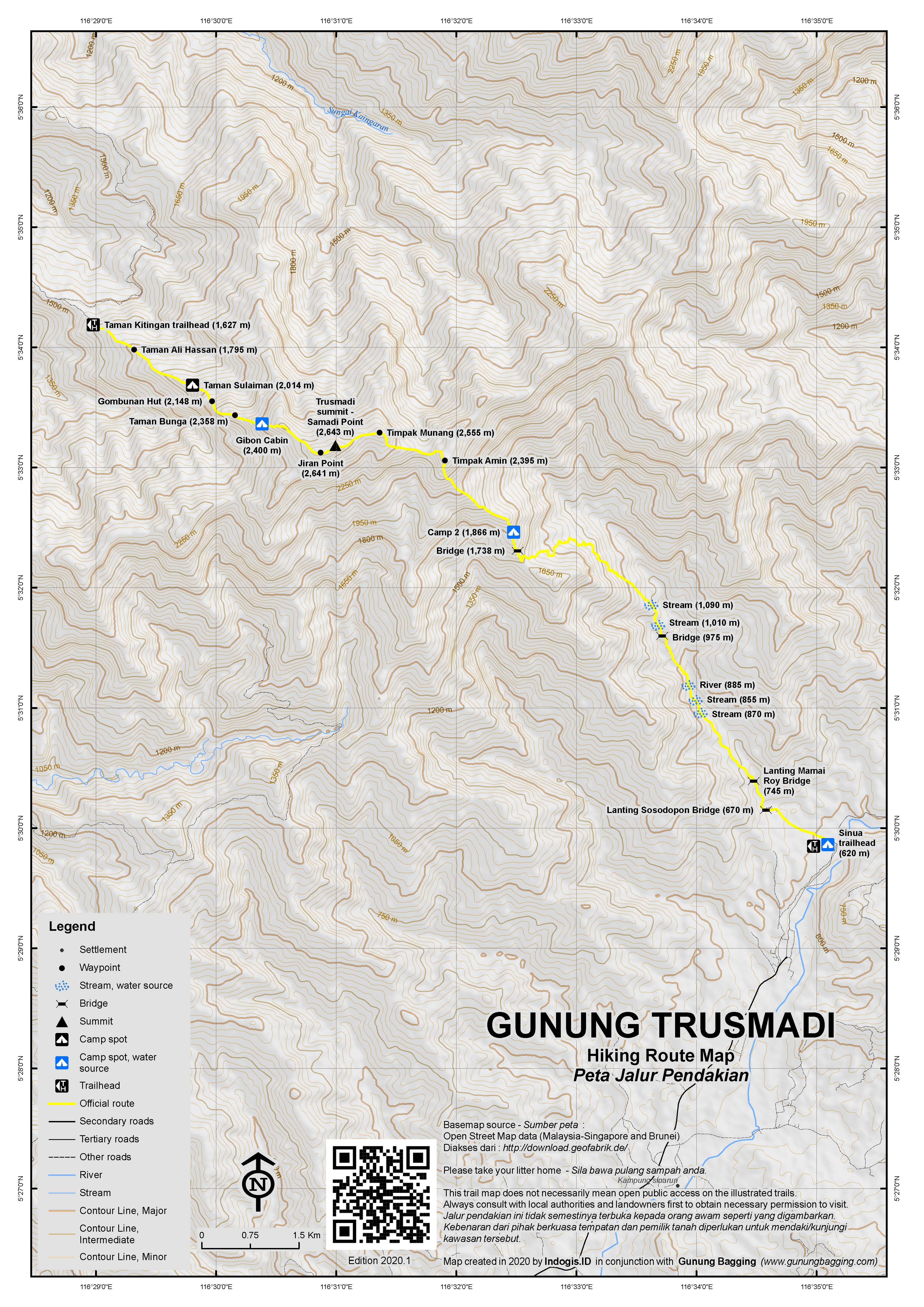 There is a rumour that this is originally from ‘terus mati’ meaning ‘you will die’ in Malay/Indonesian, presumably referring to the difficulty of the terrain in decades gone by! However, officially it is named after a local man named Samadi who first climbed the mountain in the mid-twentieth century.