Penanggungan is a small now-dormant volcano situated just to the north of the huge Arjuno-Welirang range. It used to be called Gunung Pawitra (now the name given to the summit area) because of the fog which often covers the peak so make sure you set out early to reach the top before the haze and cloud rolls in! Accessibility is not a problem as it is only a short distance from the main road connecting Surabaya with the pleasant city of Malang.

Penanggungan is a particularly revered mountain and has many ancient Hindu temple sites on its slopes – as many as eighty according to Dutch archaeological investigations conducted in the 1930s which were begun after a forest fire uncovered some of the ruins.

This whole area is a fascinating reminder of Java’s pre-Islam history and the Majapahit kingdom. It is quite tempting to try to visualize how this mountain would have be used centuries ago.

There are several approaches to the peak and they each have their advantages and disadvantages. Because of the abundance of accommodation in the mountain resorts of Trawas and Tretes, many people choose to start south or west of the peak and this is arguably where the best views of the mountain are to be found. A good budget place to stay is PPLH Environmental Education Centre, west of the mountain, where you can also find guides for the Jolotundo route.

As a rough figure, allow 4 hours to reach the top and 2 and a half to descend. Remember sun cream for this trip because Penanggungan is an unusually unforested peak so there is very little shade to be found and even local hikers describe it as hot!

Below is a list of the main routes. It is obviously more interesting if you ascend by one route and descend in a different direction.

Starting from Candi Jolotundo (west of the peak)

One of the best-known starting points for the hike is in the west at Candi Jolotundo (511m), a temple built in approximately 977AD and one of the oldest and most sacred. The temple is a very popular place for Indonesians to visit and bathe and there is information and a small office booth where you will almost certainly be able to locate a guide for climbing. This is important because the trail is not always very clear and there are numerous farm tracks near the start which can add to the confusion. The Jolotundo route passes many sites of great interest.

The trail from Jolotundo leads up through plantations and beyond various farm huts. As the trail leads onwards up the hillside, the prominent subsidiary peak Bekel (1,238m) comes into view to the left of the path. There are many farm trails here so if in doubt ask one of the friendly farmers for help. The route is subtly marked with red arrows (and red crosses to indicate the wrong way) painted on rocks and trees. After you have ascended beyond the farmland, the trail gets steeper and less clear. However, there are several ancient temples on the higher slopes, at intervals of approximately 200 metres, which more than make up for the overgrown path. These Hindu temples are very interesting monuments and, considering the steep, overgrown and narrow trail, probably not often visited.

They feature central stairways and terraced walkways with a few stone carvings. Each temple has a small grassy lawn infront of it which is neat and in good condition – evidence that local people do care for these relics. Elevations and names are as follows: Bayi (909 m), Putri (1,083 m), Pura (1,110 m), Gentong (1,144 m) which is a mini temple next to a large stone resembling an empty jar, and Sinta (1,157 m).

If the weather is good, you should be able to see the remarkable, jagged outline of Gunung Anjasmoro‘s Boklorobubuh peak to the south-west. Beyond the temples is a small cave. From here, the top of Penanggungan is clearly visible and it should take you only about another 30 minutes.

The alternative option is to take a left near Candi Sinta along an overgrown and faint trail and head to the lesser peak of Gunung Bekel which has several more temples and sees far less visitors and is therefore much cleaner. Be warned that this can take a full day to explore.

Assuing you continue to the highest peak of Penanggungan, the grassy spot is a lovely spot to sit down for lunch. In fine conditions you should be able to see the northern coastline, Arjuno, Liman, and perhaps Semeru and Argopuro. The shallow grassy bowl-like depression just below the peak is all that remains of the crater. The summit area is an almost symmetrical shape, and pretty much aligned to the cardinal points – probably one of the reasons why ancient people regarded this mountain as being of such great importance.

This route is the ‘official’ route that is most heavily promoted and is now the most popular. It starts fairly high up at the small ticket office (680m) and Pos 1 warungs at around 684m above sea level. It is clearly signposted but due to its popularity there is more litter on this trail than some of the others. It is the shortest and steepest of the routes and comes out directly at the highest part of the summit rim. Allow about 3-4 hours up and 2.5-3 hours back down.

There are not many temples to be seen on this route (seemingly just the ruined one at 1,070m) but it is a great option to combine either before or after one of the more interesting and less well-used routes.

Starting from Dusun Telogo, Desa Kunjorowesi (north-east of the peak)

The advantage of this route is that it is not very far from Sidoarjo and the main Malang-Surabaya road. The mahogany woodland is also beautiful. It starts at around 700m.

Starting from Dusun Betro, Desa Wonosunyo (east of the peak)

Similar to the Kunjorowesi route but starting due east.

Starting from Genting, Ngoro, near Candi Jedong (north of the peak)

Starting at an elevation of only around 397m, this is the longest and toughest of the hikes and that is perhaps one of the main reasons it is not very popular despite being on the industrial Surabaya side of the mountain. Allow 4-5 hours up or 3-4 hours down.

It is actually rather wild forest here despite the continual hum from the traffic and factories in the northern plains below. The trail is partially marked but it is recommended that you seek a guide at nearby Jedong temple because the higher parts are rather vague and often overgrown.

On the plus side, there are lots of temples on this side, notably including Candi Tumpak Wolu (872m) which is partially collapsed and engulfed by the surrounding forest landscape.

The next landmarks are all temples that are in better condition and clearly cared for, many with neat mini hedges surrounding them. Candi Penanggungan is at 995m, soon followed by Candi Merak (1,005m), Candi Lemari (1,045m), Candi Yudha (1,066m) and Candi Pendawa (1,080m).

It is around here that the trail can vanish into dense vegetation if nobody has used it recently but with a good guide or a bit of luck you should be able to join up with the Jolotundo trail at Candi Gentong (1,144m) or Candi Sinta (1,152m). In order to do this you need to veer to the left or simply follow the clearest trail over the col until you meet a junction. Otherwise you might end up at Candi Naga on the side of Gunung Bekel to the right (as noted above, a fascinating but wild area requiring several extra hours to explore). Once on the Jolotundo trail it is then just the final slog up to the summit. 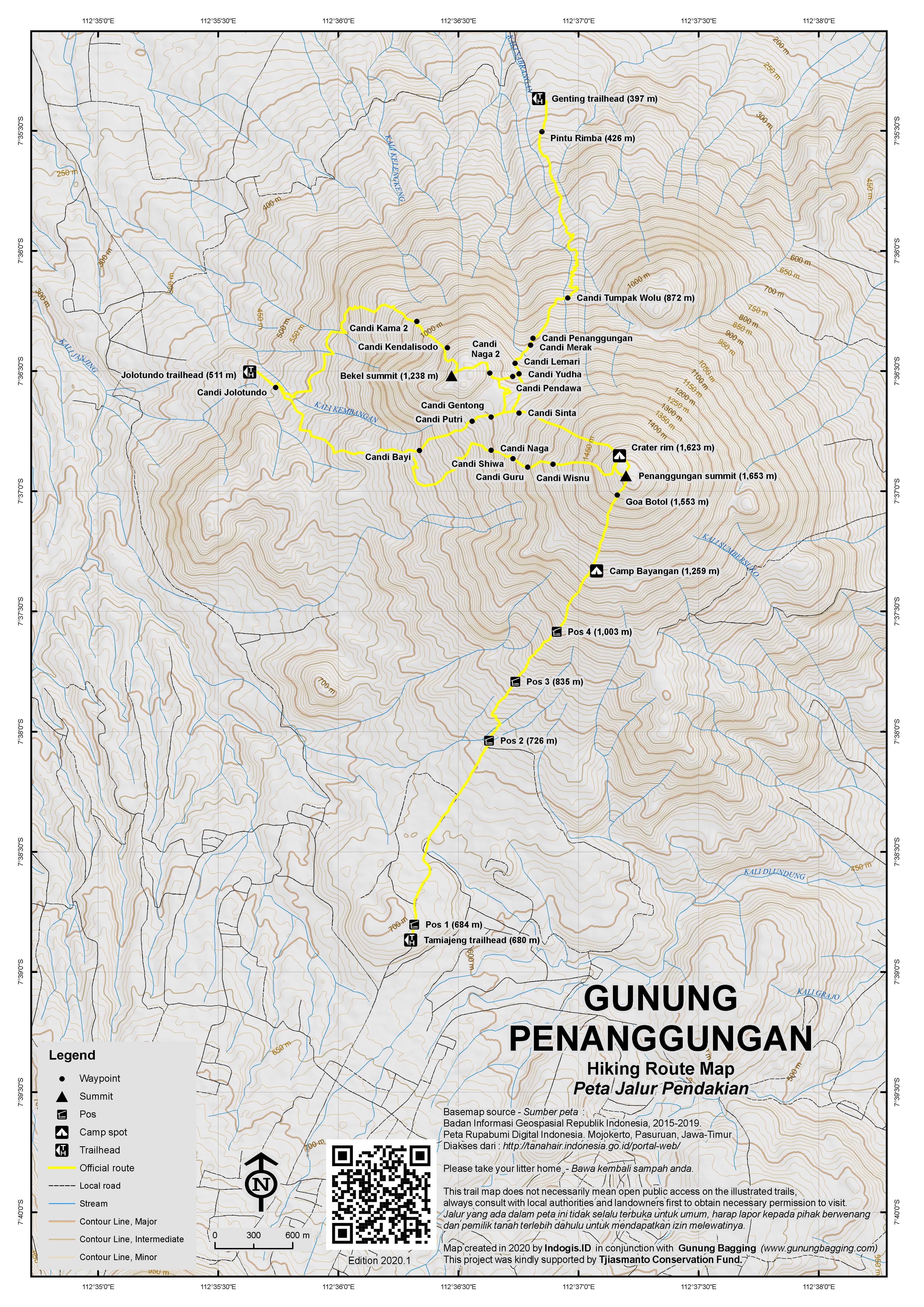 (not clear). In Old Javanese tanggung means “to bear a burden, to take on a burden” so pananggungan might mean “the place where the world is supported” (compare Gunung Sanggabuana). The Penanggungan Plateau has been a sacred place from distant times (there are significant pre-Islamic ruins to be seen there today), so it is possible that the name of the place reflects its ancient function – a place where ascetics and kings “took on the burdens of the world” by connecting with the deities of the sites. (George Quinn, 2011)