Not to be confused with the higher and more frequented (but far less prominent) peak near Gunung Yong Yap and Tok Nenek, this mountain is the highest point of a huge range stretching over twenty kilometres from Taiping in the north to Beruas in the south. It is famous for its many leeches, so leech socks are definitely recommended!

There are two trailheads – a more popular one from the east at Kem Bina Negara Ulu Kenas around 15km from Kuala Kangsar, and an infrequently-used trail in from the north near Padang Rengas. The former can be done in 2 days and 1 night whereas the latter is likely to require either 2 long, full days or more usually 3 days and 2 nights. Super-fast and extra-fit hikers might be able to reach the peak as a dayhike from Ulu Kenas (estimated 12-14 hours) if they set off at first light and have head torches for the descent.

The word ‘bubu’ means fish trap and the mountain is apparently so named because it resembles the shape of a traditional fish trap from certain angles. One of the best views of the mountain range is from the train between Padang Rengas and Taiping.

The main trailhead and parking area at Ulu Kenas (110m) is a very pleasant spot which is popular with locals at the weekends. There are chalets and a waterfall near the Eco Park and a toilet block for washing and getting changed before and after the hike. This is only about a 20 minute drive from Kuala Kangsar, which is notable for being home to Malaysia’s oldest rubber tree, planted in 1877.

As the hike is not especially popular, there are few signs on the trail so a GPS and/or experienced local guide is very much recommended. At first, the trail follows a wide vehicle track past some hydro electric project compounds with an electricity cable running above the track. After a metal bridge, the cable stops and the trail gets slightly narrower and less flat. Take the next left. After about 45 minutes in total you will reach a point in the track next to a tiny stream where there is a side trail going off into the forest on the right. This is an important – and currently unmarked – junction (278m). It is also a great spot for seeing hornbills.

Once on the narrow trail, expect a bit more overgrown tree branches to deal with, as it leads gently into deeper forest, with the river down on the left. There are several minor stream crossings and a rather pleasant little waterfall (321m). Another important junction (395m) follows after several more minor stream crossings and about 30 minutes total from the wide track, with straight ahead being a fishing path leading to the river. You need a right here, and once again it is currently unmarked!

After a total of around 2 hours and 30 minutes (or 3 hours including a few short rests), you will be at the river crossing at Camp Sungai Gading (Ivory River Camp – although written Sungai Ganding on the colonial-era map) with an elevation of around 430m. The crossing may require you to wade across and after heavy rain it could be as deep as knee or even waist height. On the other side of the river is a small flat camping area and to the left, partially hidden in the trees is an old white warning sign.

Beyond here, the trail gets increasingly steep. The peak is still around 4.4 kilometres away (in a straight line) so given that the trailhead is 8.8 kilometres from the peak this point is approximately halfway in terms of straight line distance if a bird was flying directly there (but not trail distance or hiking time)!

It takes a further 2 or 2.5 hours from Camp Sungai Gading to Camp Ulu Sungai Gading (910m), which is a rockier area near the higher reaches of the river, hence the name (ulu = head). There is enough space for several tents here just 20 metres or so from the river.

The summit is a further 2.5 to 3 hours on, up some pleasant sections of forest ridge and also often incredibly steep sections of trail with thin ropes to help you in places. After about 90 minutes is a rockface area and the Last Water Point (1,370m), large enough to mean you have a pleasant view eastwards. There is usually some water available here, and it is the last water point on the mountain trail, but whether or not it has rained recently may determine whether you get a fresh stream or just stagnant pools.

The summit itself is crowned with the remains of a metal beirut, some summit signs left by previous hiking clubs, and a couple of boulders, the largest of which is the higher point of the Bubu mountain range. There are some striking pitcher plant species here too. One sign has a nice quote on it as follows: “The happiness of mother earth is our ultimate responsibility”.

There are actually two peaks clearly way higher than everything else in the range. Just 500 metres to the north-west of the true summit is another peak – Bubu West (on modern Malaysian topo maps) previously “Bubu (Small)” on the colonial-era map with a height of 5,380 feet (1,640m). Contrary to what the older map suggests, there is no beirut or trig pillar there. A further 45 minutes from Bubu West is a third top, Puncak Puntung Asap, another striking, steep peak with apparently good views to the north. These two ‘bonus peaks’ are visited on the more difficult and time-consuming Padang Rengas trail, and are also the ‘iconic bumps’ near the top of the range that can be seen from the train journey between Padang Rengas and Taiping. The traverse from one side to the others is perhaps predictably known to local hikers as Trans Bubu.

The hiking club signs state that the summit elevation 1,568m, but rest assured this is almost one hundred metres higher at 1,656m or 1,657m. In clear weather there are partial views. There is a small amount of flat space for two or three tents but most choose to camp down at Ulu Gading with a good water source and warmer night temperatures.

Back down to Ulu Gading is almost 2 hours. And from Ulu Gading to the car park can be done in 4-5 hours by fit hikers. In total, fast hikers needs around 7-8 hours up and 6-7 back down, but not including time for breaks or suitable for those carrying heavy backpacks.

For those hiking down to (or up from) the north at Kangsar Dam (170m) near Padang Rengas, the main camping spot and water source is at Camp Matau (approximately 400m above sea level).

A peak several kilometres north-east of Bubu, but in the same range, is Bukit Arang Para – 999m (3,277ft). On the old colonial era topo map, this has the word ‘HERMITAGE’ written on it and indeed there are old relics from decades gone by up there including a water tank, stove, stone walls, wine bottles (of course!), plus a collapsed beirut.

The story behind all this is quite fascinating. The Hermitage Estate was an old tea estate (but also growing coffee and cinchona), begun in the 1880s, and also used as an escape from the heat of the valleys. One local newspaper article from 1890 describes the area being let to four Chinese men to cultivate tea and The Hermitage is described as a ‘bungalow built on an isolated spur of the Buboo mountain… reached by a riding road nine miles in length, cut through the jungle from Lady Weld’s bungalow”. There was another small estate a little lower down called Cicely, also managed by Mr Fred Watson. Sadly, they were abandoned before 1933 and left for the jungle to reclaim.

Whilst it was still active, Frank Swettenham drew at least one artwork of Gunung Bubu as seen from The Hermitage in 1884. It was also in 1884 that an expedition was undertaken to hike to the summit of Gunung Bubu, and from Arang Para no less! Julian Tenison-Woods, who also travelled extensively in Java and apparently witnessed Krakatau eruptions in the 1880s, wrote an eleven-page account of it entitled “Journey to the Summit of Gunong Bubu” and published in the Journal of the Straits Branch of the Royal Asiatic Society in December of the same year.

This was almost certainly not the first time the summit area was reached given what is written in the article, but it is probably the first time the mountain was written about in detail. The expedition was requested by Hugh Low (of ‘Low’s Peak’ fame at the top of Kinabalu). But as the writer mentions, Arang Para was a poor choice of starting point, on May 20th, with the team having to ‘descend and then climb up again over several very steep spurs before we could reach even the foot of the range‘. The flora and fauna mentioned, alongside the challenging terrain, is quite fabulous. He writes of rhinocerous ‘beats’ (paths / trails). And some things never change when hiking in Southeast Asia: “It is very difficult to make an early move from these camps. What with cooking rice for the day and packing up the baggage, a good part of the morning runs away….. We could get no reliable information from the Malays. Some said it was only two hours’ journey, while others insisted that it would take the whole day.”

As for reaching the true summit, it is quite unclear which ones of the three candidates they reached. Was it Bubu, Bubu West or Puntung Asap? It’s very difficult to say for sure. He writes about the “northern summit of the mountain” and describes one place as the summit and writes that his friends Messrs Scortechini and Bozzolo climbed a neighbouring “isolated pinnacle of granite nearly as high as the mountain” and “found on the summit a small pile of stones and a flag-staff, while the remains of a flag were strewn on the ground” presumed by the writer to have been put there by Malays paid by a mysterious Captain Speedy in charge of surveying.

“Altogether, the view from the summit of Gunong Bubu is one of the finest imaginable. Rivers and mountains, dense forest and open plains, the distant sea and the unexplored forests to the eastward all combine to form a scene of wonderfully varied beauty. Unfortunately, however, the clouds and mists almost continually obscure this prospect.“

After almost a month exploring Gunung Bubu, Tenison-Woods and team made it back to Lady Weld’s rest-house, “none the worse for our sojourn away from civilization, except in the innumerable leech-bites from which we all suffered“.

The Bukit Arang Para area has apparently suffered from logging activity in recent years so is best visited before it becomes degraded still further. Although the trail is overgrown, it can be done as a day hike from the Kuala Kangsar area (assume 5-6 hours up and 3-4 hours back down). Needless to say there are plenty of leeches up here too!

Another interesting peak between here and Ipoh is Gunung Peninjau (1,058m elevation and approximately 967m prominence). This is the highest peak in the Meru Range, looks like a good day out, is not far off being a Ribu and has views from the top! Probably around 3-4 hours up and 2-3 hours back down. Worth considering if you have a half-day free in the Ipoh area. 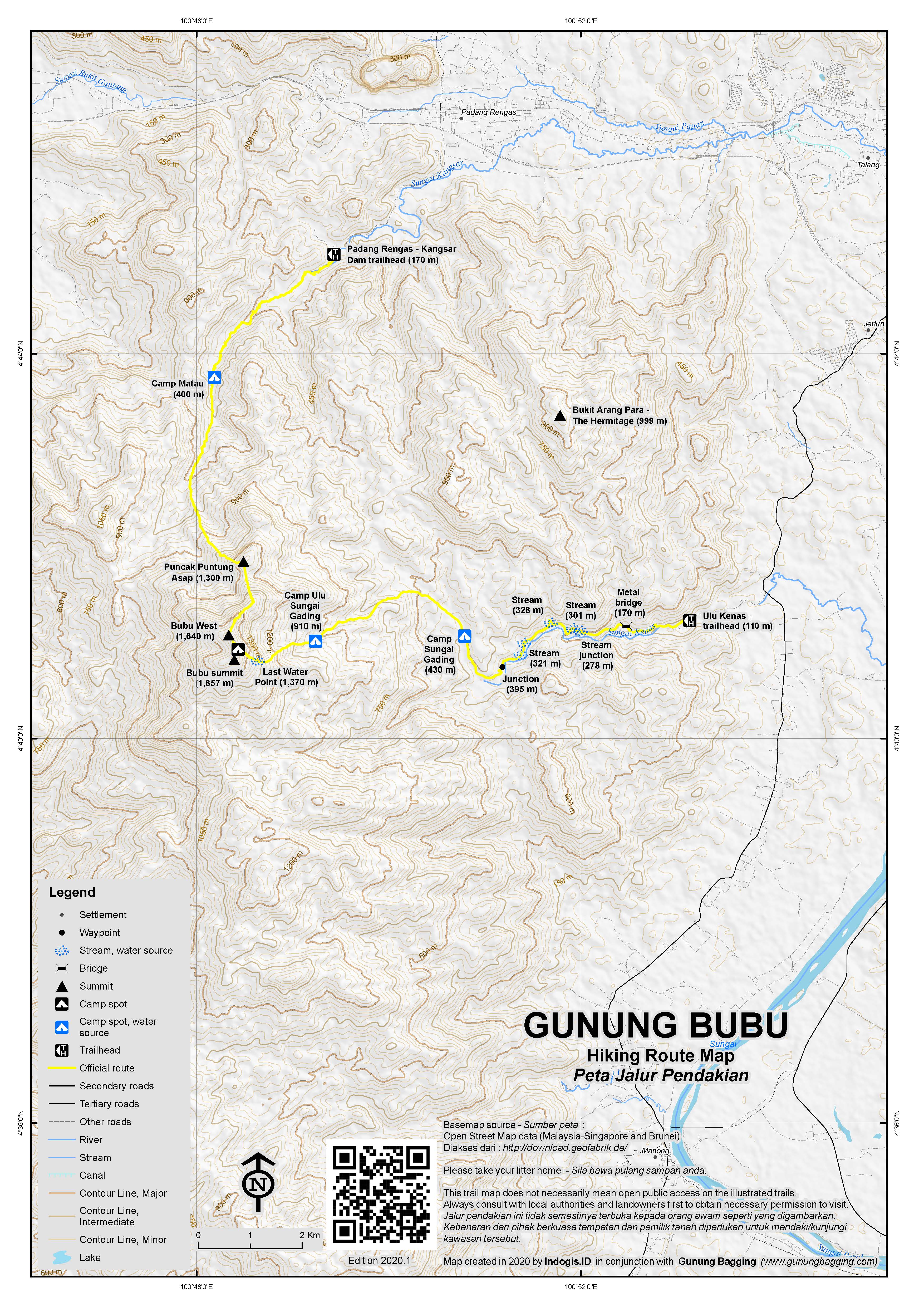