Gunung Sidole is the highest point of a long mountain range which stretches northwards from the city of Palu. These hills are densely-forested ridges with a remote atmosphere, yet this is the narrowest part of the island of Sulawesi, with less than 30 kilometres from west coast to east coast. Views to both coasts can be enjoyed from the summit of Gunung Sidole, and the trail is becoming increasingly popular with student hikers such as those from the many hiking clubs at Palu’s Tadulako University – some of whom conducted expeditions to open the routes originally.

Gunung Sidole can be climbed from the west side just one hour from Palu city at Desa Taripa or Desa Sisera (south of Taripa). Both approaches have trailheads at only around 100m above sea level, and are long (12km in a straight line from the trailhead to the peak, but lots of ups and downs and typically requiring 3 days up and 2 days down) and on rarely-used trails which are easy to get lost on. Indeed, one group got lost in 2017 when approaching Sidole from the west side. To reach the Taripa trailhead, take a right on the main road at Toaya onto Jl Dindimaka. Follow this straight for 20 minutes over a wooden bridge and past Taripa and to the end of the road at a river and wooden shelter.

The steeper and shorter eastern route starts at Desa Alo’o, near Ampibabo, and though it takes about 2 and a half hours to reach by car from Palu it is the most commonly used route.  Sidole cannot be seen from the western trailhead but can be seen from the eastern side (though it is often shrouded in cloud). From Alo’o (pronounced “allo-oh”) strong hikers could reach the top and return in two days but, given the distance to/from Palu and the lack of accommodation nearby, it is best to spread it over three days with one half-day either side and the middle day the really long one. It is possible to fly in to Palu from Jakarta very early on Day 1 and arrive back in Jakarta on the evening of Day 3 having completed the hike.

To reach the Alo’o trailhead (202m), head over to the Trans-Sulawesi highway on the east coast, north towards Ampibabo and turn left at the blue monument at Desa Toga (‘tugu toga’) via Desa Sidole towards Desa Alo’o. It is about half an hour inland from Desa Toga to Desa Alo’o, but the last couple of kilometres are steep and you may need local ojeks instead of a car to get past Puncak PID (‘program inovasi desa’ – innovative village program) which is a little decorative viewpoint to the east coast before the road enters Desa Alo’o.

Any villagers in Alo’o will point you in the direction of the house on the left where you should register in the registration book before hiking. Many locals know the peak as ‘Puncak Semen’ (cement peak) due to the pillar at the top. Foreigners should expect to be asked for numerous photographs here with villagers. A group of local hikers – KPA Laskar Puncak – may wish to accompany you, if not to the top then up the river as far as Pos 2 which is a good spot to spend the first night, if not both nights.

From Alo’o to Pos 1 (322m) takes about 1 hour. The trail leads through cocoa plantations by the side of the Alo’o River (Sungai Alo’o) but some hikers find it easier to simply walk up the river itself. Pos 1 is a few planks of wood by a large tree next to the river, and would be easy to miss by those using the plantation trail as opposed to wading up the river. There are no signs here but it makes a decent place to have a short break before proceeding to Pos 2 which requires another hour and numerous crossings of the river before the trail simply becomes the river itself! You will definitely get your feet wet, so either bring comfortable and sturdy sandals, or prepare to have wet hiking boots for the rest of the trip.

Between Pos 1 and Pos 2 as you head upstream there are some lovely narrow sections of river with minor cliffs on either side. Pos 2 (approximately 501m above sea level) is a flat spot next to the river with several signs on a large tree and a chilli plant. There is enough space for about 3 tents and, depending on which onward route you take, is allegedly the last place with a reliable water source before a spot 30 minutes beyond the summit. It is best to fill up here.

From Pos 2 to Pos 3 takes 4 or 5 hours, and there are two different routes to choose between. The original route takes 5 hours but is slightly clearer and less steep than the new direct, steep, spiny and vague short cut route which takes around 4 hours. This is the section where you will encouter leeches and it is advisable to wear a hat or similar to cover your ears as there are quite a few very small leeches that are difficult to notice. For the adventurous, the new short cut direct route to Pos 3 may be a good choice, but be warned! If you are considering camping higher up the mountain then the original, longer route to Pos 3 is probably a better idea as you may struggle to take large backpacks up the short cut route. On both, take real care as there are some very steep sections and often very little to hold onto other than huge spines. Gloves are recommended for additional protection.

Pos 3 (1,393m)  is at the lower end of a ridge leading up to the summit, which is just over 1 kilometre away. There is some space for camping but the ground is lumpy due to tree roots. If taking the short cut route up here, there is another flattish spot about 20 minutes before reaching Pos 3. From Pos 3 to the summit takes about 90 minutes. The trail first descends a little bit, including over recent treefall, before ascending steeply up for the last hour or so. The forest is very pleasant, but as is typical there are few views to be had between the trees.

Finally the grassy summit is reached. This is by far the best spot for camping, with plenty of space and nice views to both east and west. Alas, getting big backpacks all the way up here and back down within 3 days would be quite tough, though doing a four-day traverse from east to west would make a great expedition.

The summit is crowned by the remains of a cement pillar which is presumably an old Dutch trig point and was likely hit by lightning at some point leading to its break-up. There are a few signs nailed to bushes and trees, plus a tomato plant and a citrus bush! Although the views east to the coast of the Gulf of Tomini are pleasant, the best by far are to the west. From the cement pillar you look down to Palu bay, with the Tanjung Karang peninsula beyond, Palu city at the head of the bay, and the mountains of Bulu Nti and Gawalise behind.

You may also notice some old bits of metal machinery at the top of the peak. This is part of the wreckage of a plane which crashed in 1974 down to the west of the summit. The crash site itself requires an hour to reach from the summit and you would need locals to help you locate it. Beyond the cement pillar is a trail to a water source, which takes 20 minutes or so to reach.

The mountain is named Bulu Sinio on the Bakosurtanal map (Tavali) and the US Army maps from 1954 but this seems to be either an error or an old name that has fallen into disuse given that no locals have heard of this name. On the US Army map, ‘Bulu Sidole’ is the name of a lesser peak a few kilometres further north beyond Gunung Balia (another lesser top). However, the Bako summit height of 1785m and US Army map height of 1786m are seemingly very accurate based on GPS readings, meaning that Sidole fails to qualify for Ribu status by just 4 or 5 metres of topographic prominence! Some provincial and national maps list Sidole as being 2,099m high but this is definitely incorrect.

Apparently the mountain is home to lots of tarsiers and a small number of anoa but we didn’t see or hear any on our trip. We did hear plenty of hornbills between Pos 2 and 3.

To descend from the summit to Pos 3 takes about 90 minutes and from Pos 3 to Pos 2 another 4 or 5 hours. It is then another 2 hours back to Desa Alo’o so basically the same amount of time down as on the way up. The recommended itinerary for those wishing to hike up from and back down to Desa Alo’o is to Camp at Pos 2 for 2 nights, with the middle day for reaching the summit and coming back down again to Pos 2 (10-12 hours total). 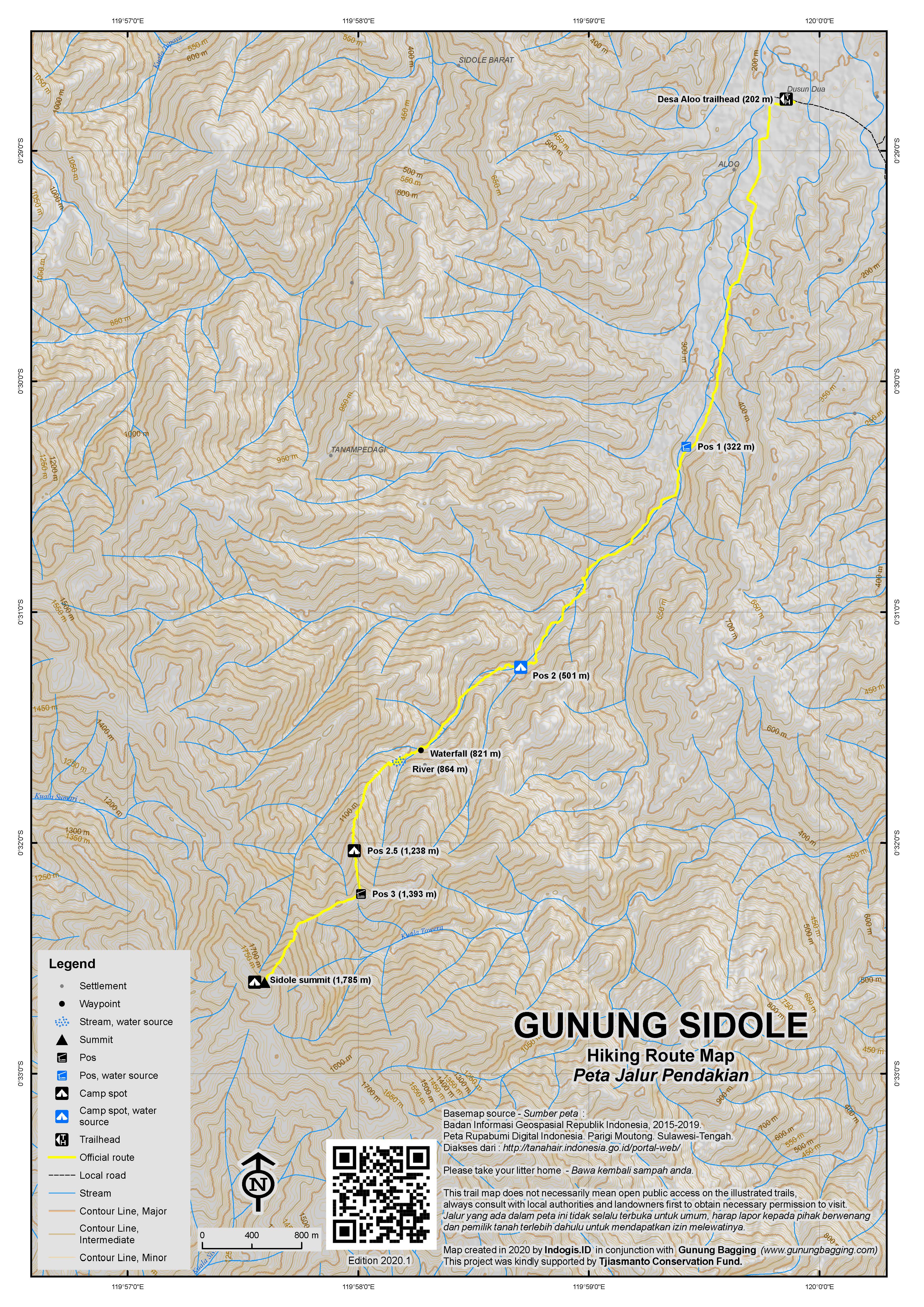