Bulu Nti is the highest point on a very long mountain ridge to the west of the city of Palu. It is this ridge which keeps Palu so dry to the extent that the city is one of the driest places in Indonesia. The more northerly (and smaller) Gawalise (2,023m) is much more commonly climbed and can be done in two days (as opposed to three). The top is about 8km (horizontal straight line) from all trailheads mentioned below so it is perhaps no surprise that you need three day to climb it. The peak of Bulu Nti itself cannot be seen from the main road as it is hidden somewhat behind nearer parts of the mountain ridge. This remains a really wild mountain despite being close to a major city and airport and was only first explored and documented in 2007 by Tadulako University’s Lalimpala.

There are three routes up onto Bulu Nti and all start down Jl Palu Bangga near Desa Bobo (which is just 40 minutes from Palu by car or motorbike). The road from the city follows the base of the long, steep mountain ridge. Just north of Desa Bobo  near Desa Kaleke is a turning down a track to Air Terjun Wera (Wera Waterfall) which is a moderately popular tourist area for local people at weekends. The hike can be started here but it is very steep and rather dangerous – indeed, in June 2013 the area was closed due to a recent fatality.

The second route is from Desa Jono, a little further south of Desa Bobo. Like the trailhead at the waterfall, the starting elevation is very low (75 metres above sea level) and the first section of the trail leads up the hillside with very little shade to keep you cool.

However, the best trail actually starts in Desa Balumpewa (turn off the main road at the sign for Sigi SMA school) at a height of 121 metres above sea level. Here you should report to the very friendly village head (‘kepala desa’) but no official registration book is kept or permits required at present. From Balumpewa, walk up the village street to a t-junction near a blue cement water tank and take a left downhill for a couple of minutes before turning right up onto the hillside near some coconut palms on a narrow but well-used stony path.

This path has excellent open views over the wide valley through which runs the Palu River. At an unsignposted junction at a height of around 640m (about 90 minutes of hiking from Balumpewa), be sure to turn left. The path zigzags up through corn, cocoa, bana and chili fields and as you get higher the views get wider and wider, eventually with the shapely peak of the popular Gunung Nokilalaki becoming visible to the south-east.

After around 2 hours, you should have reached the small village of Dusun Tiga (748m). You can actually get an ojek up here (or back down) but the ground is stony and the price quite high (Rp75,000 – Rp100,000 one way) and it may need planning in advance to avoid waiting for a long time for enough drivers to be arranged for you group. Here you will see tomato plants, a volleyball net, jambu trees, lots of dogs, and perhaps even some simple bat catching equipment (to be eaten, naturally!)

Beyond Dusun Tiga there is an area of cleared land (861m) with wide views to the hills on the other side of the valley and to the city of Palu itself. A small stream is crossed a little further beyond at a tiny hamlet of 3 or 4 basic huts (915m, after a total of 3 hours) but you may need to ask local farmers to help you locate this important water source.

The final hamlet (979m) comes after about 3.5 hours in total, and is home to numerous large pigs and some Candlenut trees (‘kemiri’). Beyond here, the trail gets much more difficult as it is much less well-used. You need to negotiate unstable but often hidden rocks and holes, and then a steep muddy section near some bamboo.

After a lot of effort you will finally reach what is known as Pos 3 (1,433m – after about 5.5 or 6 hrs total). This is a simple, flat area of bracken next to a tree which can accommodate 3 tents or so. It is the ideal place to camp on the first night, especially as the views down to Palu and the valley are excellent. Plane-spotters can watch jets landing and taking off from Mutiara Airport and the night lights of the city are very pleasant indeed! There are lots of unusual insects such as ornate spiders here so look out for rare species on a mountain range that is currently not well-documented.

On Day 2, the views are much less extensive as  beyond Pos 3 you soon enter forest (1,534m). It is still 4.5km in a straight line to the peak, so getting there and back to Pos 3 again is perhaps too much for one day. Be sure to follow the white plastic markers attached to branches by Tadulako University’s pioneering hiking club Lalimpala. Indeed, without these markers – and without anyone having been up the mountain in previous months – you might find a third night camping is required.

After about 1 hour from Pos 3, you will find yourself on a narrow ridge heading a little bit to the right. At a low section of the ridge (1,631m) is the last proper chance for water which can be found 5 minutes away down to the right (unmarked in 2017 but hopefully marked in 2018). Pos 4 (1,983m) follows a couple of hours later (3 in total from Pos 3) and is a small grassy area with evidence of previous expeditions here. Look out for pitcher plants, edelweiss and hope to be presented with a view of the higher slopes of Bulu Nti. It is certainly possible to camp at Pos 4 (for example, if you started early enough on Day 1) but the views are much less extensive than at Pos 3.

Beyond Pos 4, the forest becomes denser, darker, harder to navigate, muddier, mossier, and lumpier, with very few spots flat and large enough to accommodate more than one or two small tents. There is one area at around 2,246m which is referred to as Pos 5 by Lalimpala. It takes around 2 hours to reach here from Pos 4, so a total of 5 hours from Pos 3. If your team are feeling strong, it makes sense to set up camp and then head on for a further hour to reach the summit and then come back again to Pos 5 (another hour) and the extra strong may even be able to get back to Pos 4 for a slightly more comfortable and open camp spot.

The peak itself has the remains of an old triangulation pillar (presumably from Dutch times) plus a regional boundary marker and a deep hole. Like on Manado Tua, this deep hole was apparently dug by locals thinking there might be buried treasure waiting for them under the trig pillar, left there by foolish colonialists!

According to the hand-made sign at the top, the mountain height is 2,325m. On our trip in December 2017, GPS devices gave readings from 2,320m to 2,338m but mainly hovered around 2,325m. The Bakosurtanal map gives a height of 2,324m which is the figure we are using. It means Bulu Nti has 1,002m of topographic prominence and is therefore just 2 metres over what it requires to qualify as a Ribu!

Assuming you are camping at Pos 5, it is just under 1 hour back to your tent. For those who left their equipment at Pos 4, you have a 2.5 to 3-hour trek back. For Day 3, From Pos 5 it is 8-10 hours back down to Balumpewa (or 6-8 from Pos 4). The exhausted may be able to negotiate an ojek back down to the village from Dusun Tiga, but without prior, prolonged bargaining it may be around Rp100,000. 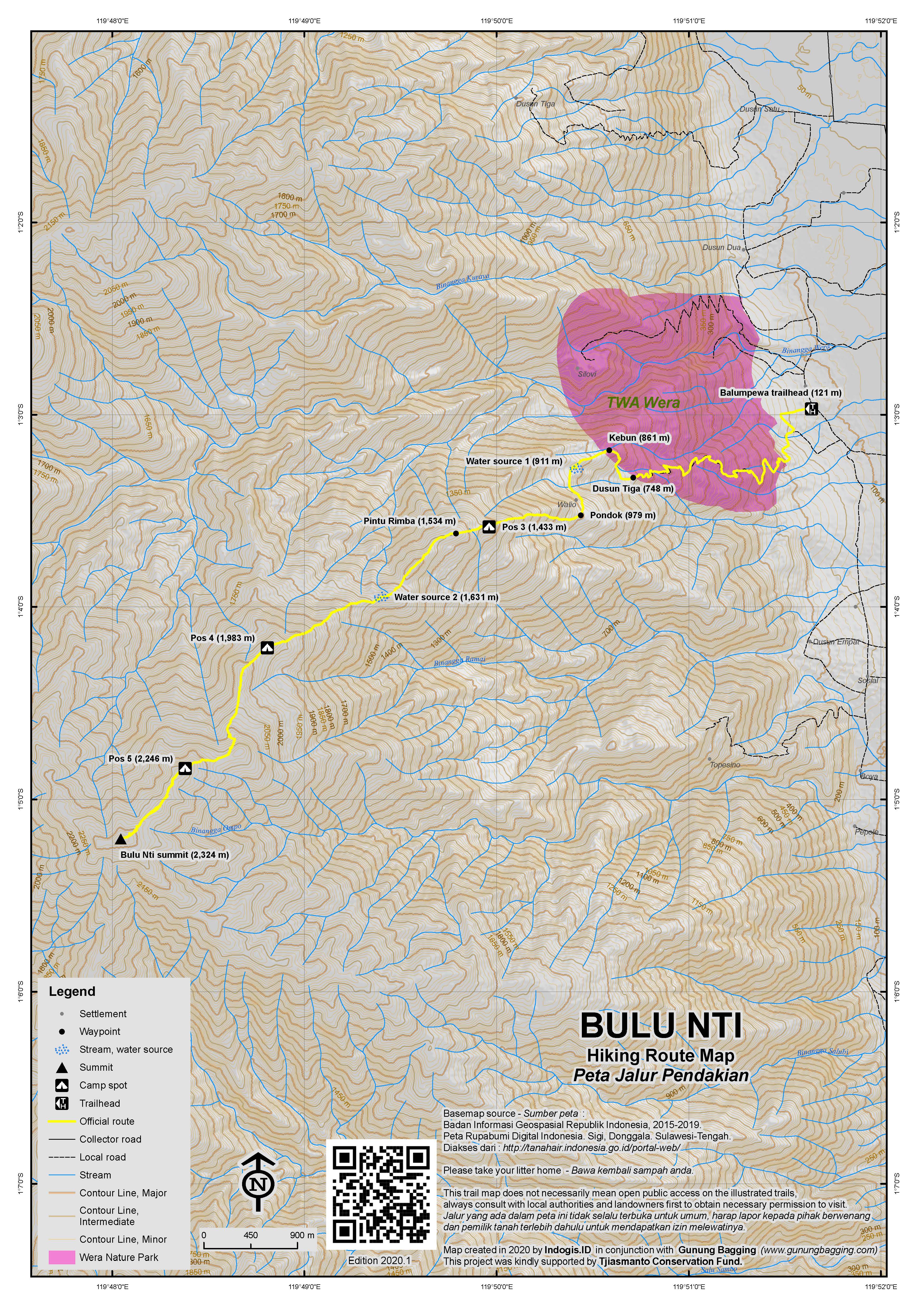 One thought on “Bulu Nti”