Gunung Bukittunggul is the highest peak in the mountainous area north of the city of Bandung, higher than both Tangkuban Parahu and Burangrang which lie further west. It is a major landmark when seen from other hills in the Bandung area and can be easily reached and climbed as a daytrip from Bandung or even Jakarta. Bukittunggul is only about 2.2km away in straight line from the nearest village so if you set out from Bandung before light you can just about be back down in Dago again in time for lunch. Whilst there are no views to be had at the forested summit, the trek is not yet as hugely popular as most other significant peaks surrounding Bandung so if you are searching for relative solitude then this is a great choice.

Route 1: From Kampung Pasir Angling. To reach the most popular trailhead at Kampung Pasir Angling (nothing to do with angling in the English sense) takes about one hour by car or motorbike in good traffic conditions from Bandung city centre. If using public transport from Bandung, there are various angkots from the railway station to Lembang and then on to Cibodas, Maribaya and Suntenjaya. There is an arch at a minor road junction (to the left) beyond Suntenjaya which is clearly marked as being for Pasir Angling. It is steep at first and then rocky and narrow but most cars and bikes should be able to make it up to the warung (1,439m) with the forested peak of Bukittunggul clearly visible directly ahead to the northeast. Motorbikes are a better idea as there is not much room for parking cars up here.

From the warung at Pasir Angling, follow the road up the hillside in the direction of the forest. There are good views back towards the long ridge of Palasari. At the road end the trail continues straight on, though there are no signs. The wide, muddy lower sections of the trail are used (and churned up) by local moto-cross riders but thankfully there is an alternative narrow route for pedestrians which is also a short cut up the hillside. The trail steepens before flattering out on a pleasant ridge of pine trees. It then steepens considerably after entering genuine original forest and you will need to use your hands in certain sections (especially during the rainy season).

There are currently (2017) no posts/pos on this trail and even during weekends you are unlikely to meet many other hikers or see much in the way of litter. It should take moderate hikers not much more than 2 or 2 and a half hours to reach the top. The summit itself is unremarkable – a few flattish areas suitable for camping, a few wild raspberries plants, and not much of a view! There are two separate yellow signs and the tree next to the second (higher) one has a very slender, simple wooden ladder up it which small and light people may wish to ascend part of the way to try to get a view over the tops of the trees. Apparently there are remains of the foundations of an ancient Sundanese temple here and, as with Tangkuban Parahu, the mountain is supposedly of great significance in the legends of Sangkuriang.

Route 2: Bukittunggul plantation. The road to the Bukittungul plantation ends about 2km beyond Cibodas at a large red metal Bukkittungul sign and a small warung. From the warung and the sign, where there is enough room to leave two vehicles, a farm track leads up the hill straight ahead – you can also take the track on the left and join the track a hundred meters along. Don’t take the track leading right to a small village. If in doubt, ask at the warung. The farm track is suitable for 4WD and motorbikes so if you can find an ojek (motorcycle taxi) you will be able to save more than an hour of walking up the track through the plantations. There are likely to be plenty of farm workers who you can ask for help. Assuming you haven’t got a motorcycle taxi up through the plantations, it will take just over 2 hours to reach the point at which you leave the farm track and tackle the steep and overgrown path to the summit of Bukittunggul.

But first, a description of the farm track itself. It snakes through the plantation from the warung gently ascending the slopes. Telegraph poles follow the track for a short distance (connecting the various remote villages up the hillside) and the smaller peak to the right of the track is the lower Gunung Palasari (which according to several plantation workers is quite a good viewpoint). After about 30 minutes, you will walk under a nice-looking green Bukittunggul sign gatepost and past a “Pos Satpam” building. The track then snakes its way up the hillside through a large kampung with a mosque. In good weather, you should be able to see the forested Bukittunggul peak in front of you. Keep following the track as it passes another small warung and another mosque and sign with “Flamboyan” on it.

The track then leads downhill and then back up the hillside near a small shelter with a blue tarpaulin roof and towards the village of Pangli (Panglipurgalih). Shortly after this, as you come close to reaching the highest point on the farm track, you need to take a left and scramble up the steep hillside. You will probably have to ask for help in locating the correct point at which to leave the farm track and tackle the summit as there are no signs or clear tracks. It took about 90 minutes of hard-going jungle-bashing to reach the top. There is a narrow and overgrown path for most of the route to the summit but at points it seems to vanish completely!

It takes about 3 hours to walk back down from the summit to the starting point at the warung. However, you may well have the opportunity to hitch a ride on a farm truck or motorbike.

Whilst this Ribu is perhaps the least interesting in West Java, the walk through the plantations and small hillside villages is pleasant enough and if you ask for help from locals then you shouldn’t have too much difficulty in reaching the top. 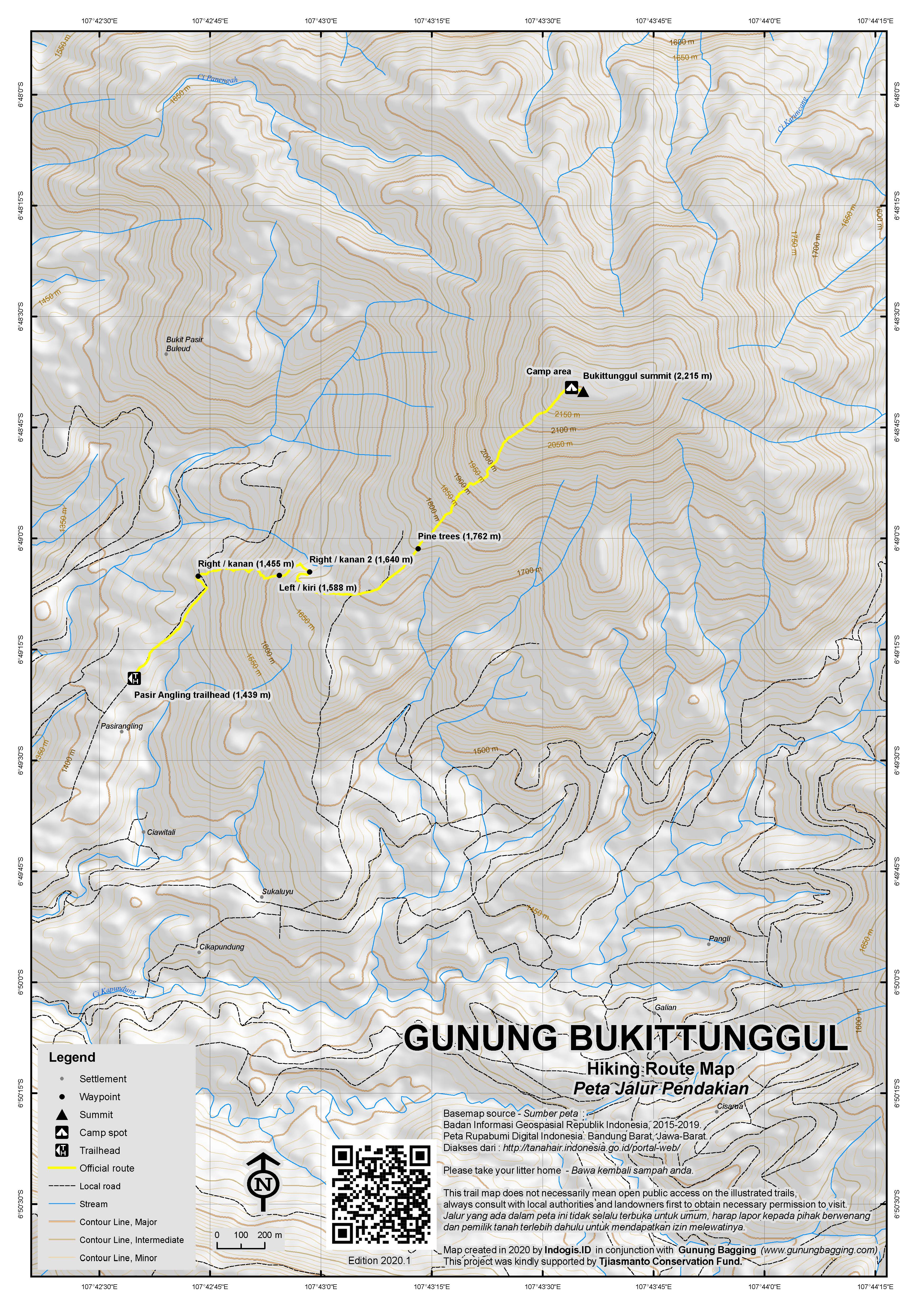 Prominent Hill. In Sundanese tunggul means “tree stump” but also “to stick out above the surface”, “to be most prominent” (related to Indonesian word unggul = superior, like the English term “outstanding” or “standing out”). (George Quinn, 2011)