This beautiful mountain is the highest point of Kabaena island and is probably the second-most popular hike in the province of Southeast Sulawesi. It takes a long time to get to from major cities but has some of the nicest scenery in all of Sulawesi.

Sabampolulu is mis-spelt Sambapolulu on Google Maps, Bakosurtanal and many other sources. The name apparently comes from “saba” meaning “tossed up” and “mpolulu” meaning a type of axe. The peak is listed as just 1,533m high on the Bakosurtanal map but this is almost definitely slightly lower than the true elevation of the highest peak which supposedly remains unclimbed as of 2021.

The trail starts in the tourism village of Tangkeno (593m) which is about one hour from Dongkala port on the eastern side of the island or Sikeli port on the west. Beyond the village, a road leads up past the local lodging accommodation and onto a track under a gateway entrance sign for Kawasan Benteng Tuntutari (656m). A large wooden house on the left at the end of the track is the place to leave motorbikes and the start of the trail (702m).

The views even here are quite fantastic in clear weather, with the iconic karst cliffs of Batu Sangia (approximately 1,100 metres high) visible a few kilometres away to the north-west. As you get higher up the mountain the views to Batu Sangia get better and better.

From the trailhead, the path leads up thee rocky, grassy slope, essentially following the least steep terrain. Pos 1 (800m) near a few small trees and Pos 2 (985m) are both easily missed, especially Pos 2 which currently has no sign. In between Pos 1 and 2 is a small cluster of satellite dishes (904m) which is difficult to miss. Pos 3 (1,061m) is next to a few small trees and a much taller transmitter tower (‘menara’) of some sort. Most hikers will have reached this point in less than 90 minutes. This is a great spot and would be fine for camping given the flat, grassy terrain, but it is best to proceed to Pos 4.

To get from Pos 3 to Pos 4, don’t continue up the steep grassy slopes ahead (which is a lesser western peak known as Wumbun Tandasa, over 1,200m in elevation) but rather skirt round to the left to reach the col on the ridge between Tandasa and Sabampolulu itself. At Pos 4 (1,095m) the edge of forest on the other side of the ridge is reached. This spot is fairly sheltered and the views to the higher slopes of Sabampolulu, the coastlines and back over to Batu Sangia are excellent. No wonder it is the preferred camping spot on the mountain. Most will be up here in under 2 hours.

From Pos 4 onwards, it is basically just a case of following the ridge. It drops down at first, entering forest (1,062m), and then reaching a minor trail junction (Simpang Mata Air, 1,050m) which is unmarked but is the only place to find water about 20 minutes down to the right of the ridge. Around here you will probably see evidence of wild pigs (babi hutan) trampling around the area.

Beyond this junction, the trail continues along the ridge, dropping down to Pos 5 (1,045m) which is another good campsite with views through the trees back to the grassy peak known as Tandasa.

After Pos 5, the trail leads up quite steeply and the views start to get really good, all the way out to the ocean and Batu Sangia. Pos 6 (1,147m) is next before another forest entrance (1,219m) and a third (1,304m). There are approximately five different pintu rimba (forest entrance) on the trail, as the forest gives way to less dense vegetation and views, and in some cases open, grassy terrain.

One of the most spectacular sections of trail follows at 1,408m where there are numerous rocks to walk over, and the views in every direction are spectacular.Just beyond this is an unmarked grassy peak (1,435m) which again offers wonderful views including for the first time to the true peak ahead and the obvious gap which is a deep cleft in the ridge between Pos 9 and the true peak. The lower peaks a couple of kilometres to the south are referred to as Pegunungan Malapulu – the Malapulu mountain range.

After the fourth pintu rimba (1,425m) look out for pitcher plants (kantong semar) and also small, brown mountain crabs. Pos 7 is at 1,423m and is a lovely forest environment with cantigi (vaccinium) trees and from here onwards the trail is less steep, simply following the gentle ridge. After Pos 7 there is a lovely open grassy section of ridge (1,458m) before the edge of more substantial vegetation is reached at Pos 8 (1,481m). However, the trail does not enter forest at Pos 8 but rather skirts round to the right side before the fifth and final pintu rimba (1,494m). Watch out for rattan thorns around here.

This is proper moss forest now, as is common on most peaks in Sulawesi when you are nearing the top. Finally Pos 9 is reached (1,523m) which is moss forest with several hiking club signs. Alas this is as far as any hikers have been, despite it being quite obvious that the peak about 500 metres further on to the south is around 40 metres or so higher. Indeed, this true summit can be seen just beyond the summit signs, lying beyond a deep cleft in the ridge that is so steep it could only be attempted with ropes by veri experienced rock climbers, or more sensibly from an entirely different direction altogether.

Even so, this is a lovely spot to sit for a while. It should have taken most hikers around 2.5 to 3 hours from Pos 4, so around 5 hours in total from the trailhead meaning it is quite possible as a day-hike if you start at first light.

Most hikers can be back down at Pos 4 in 2 hours and then a further hour down to the trailhead near Tangkeno. 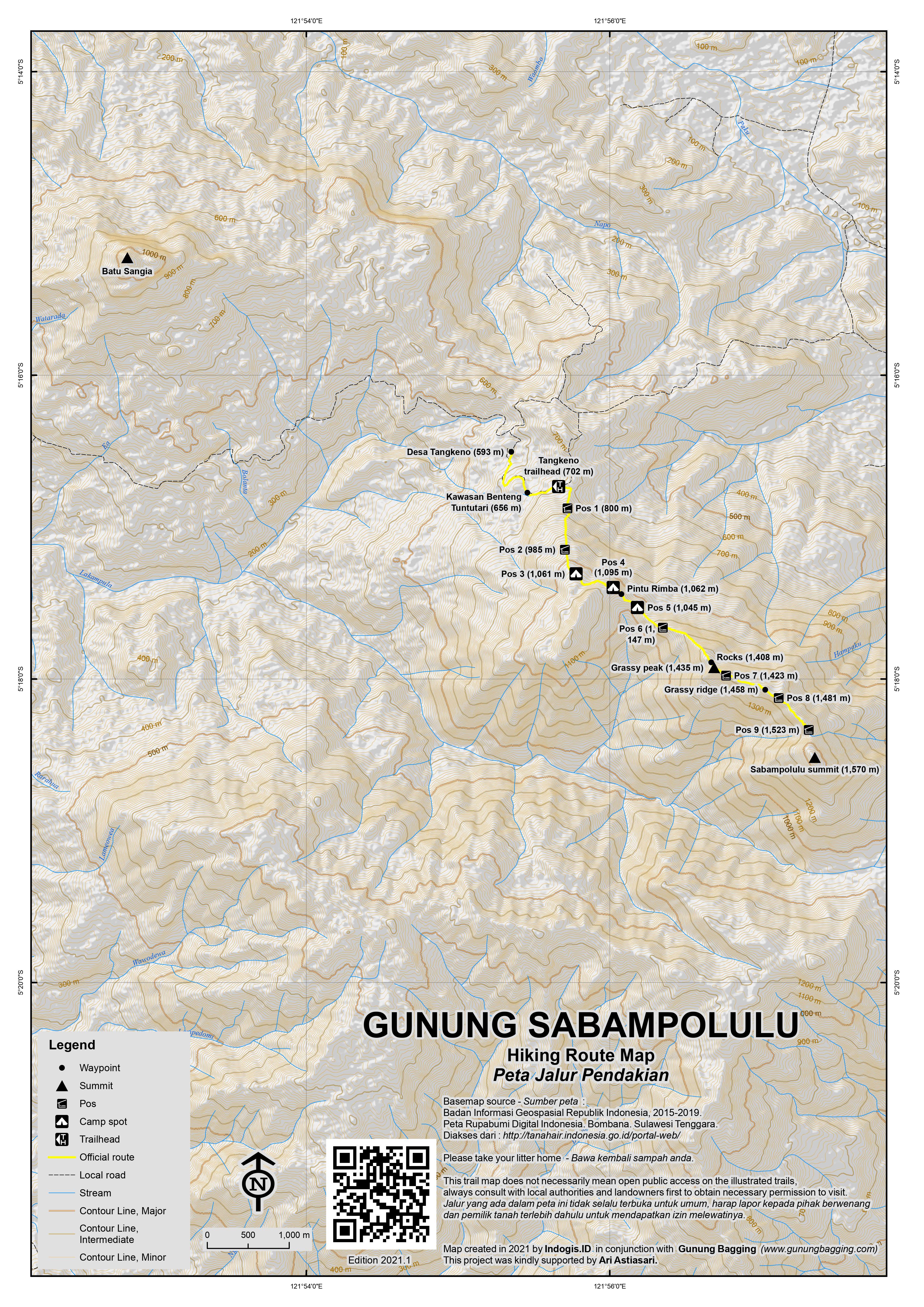