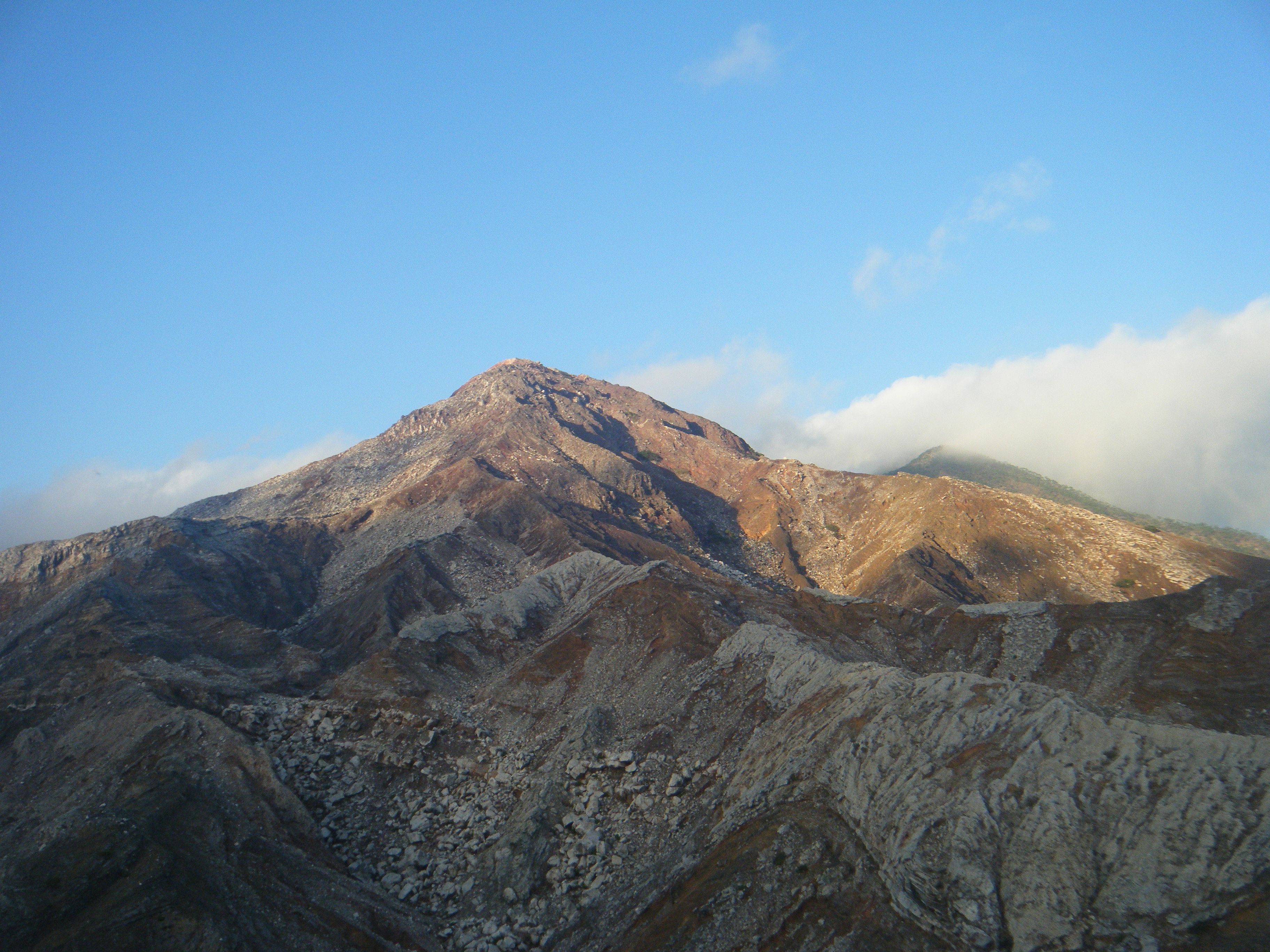 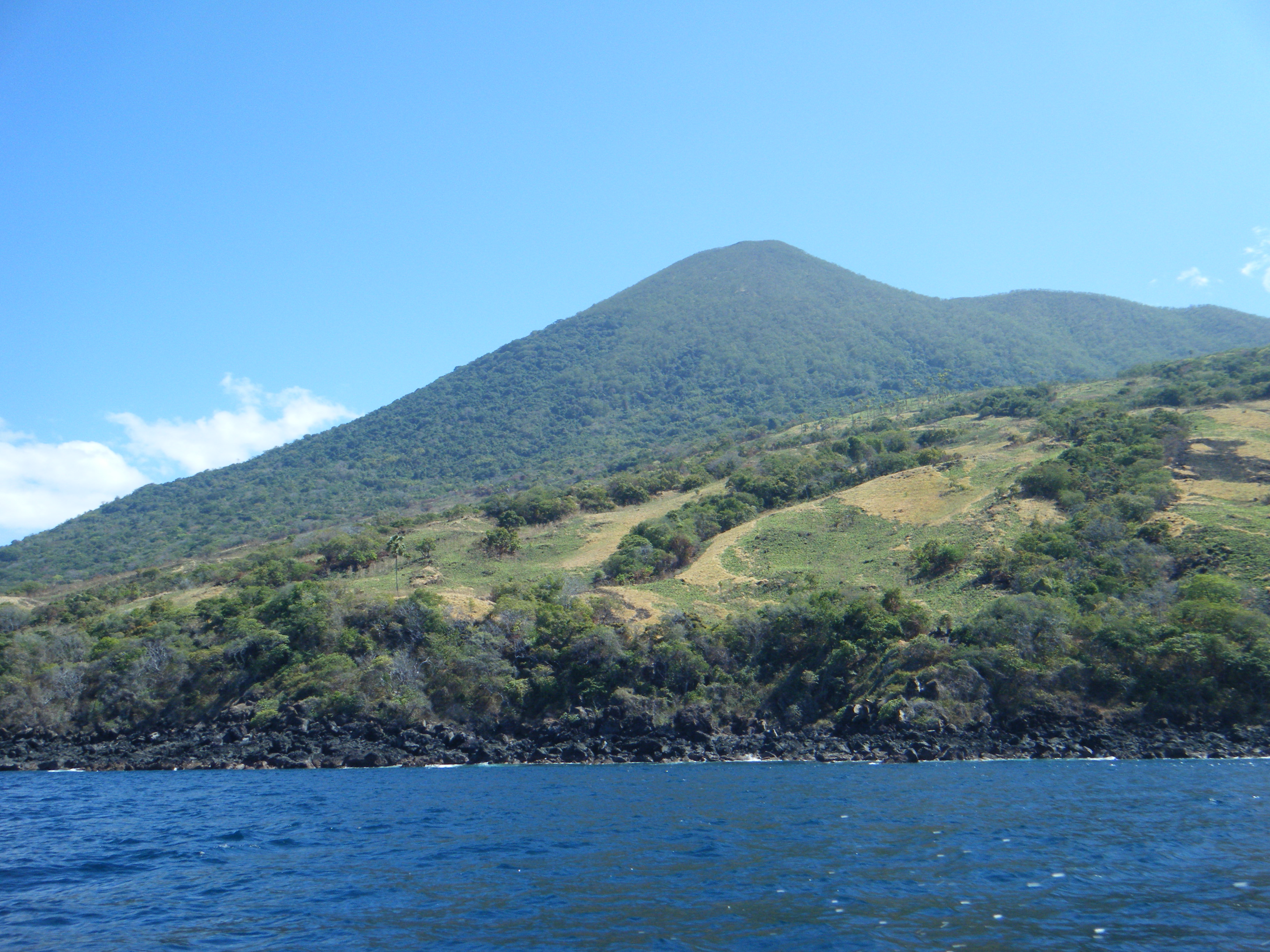 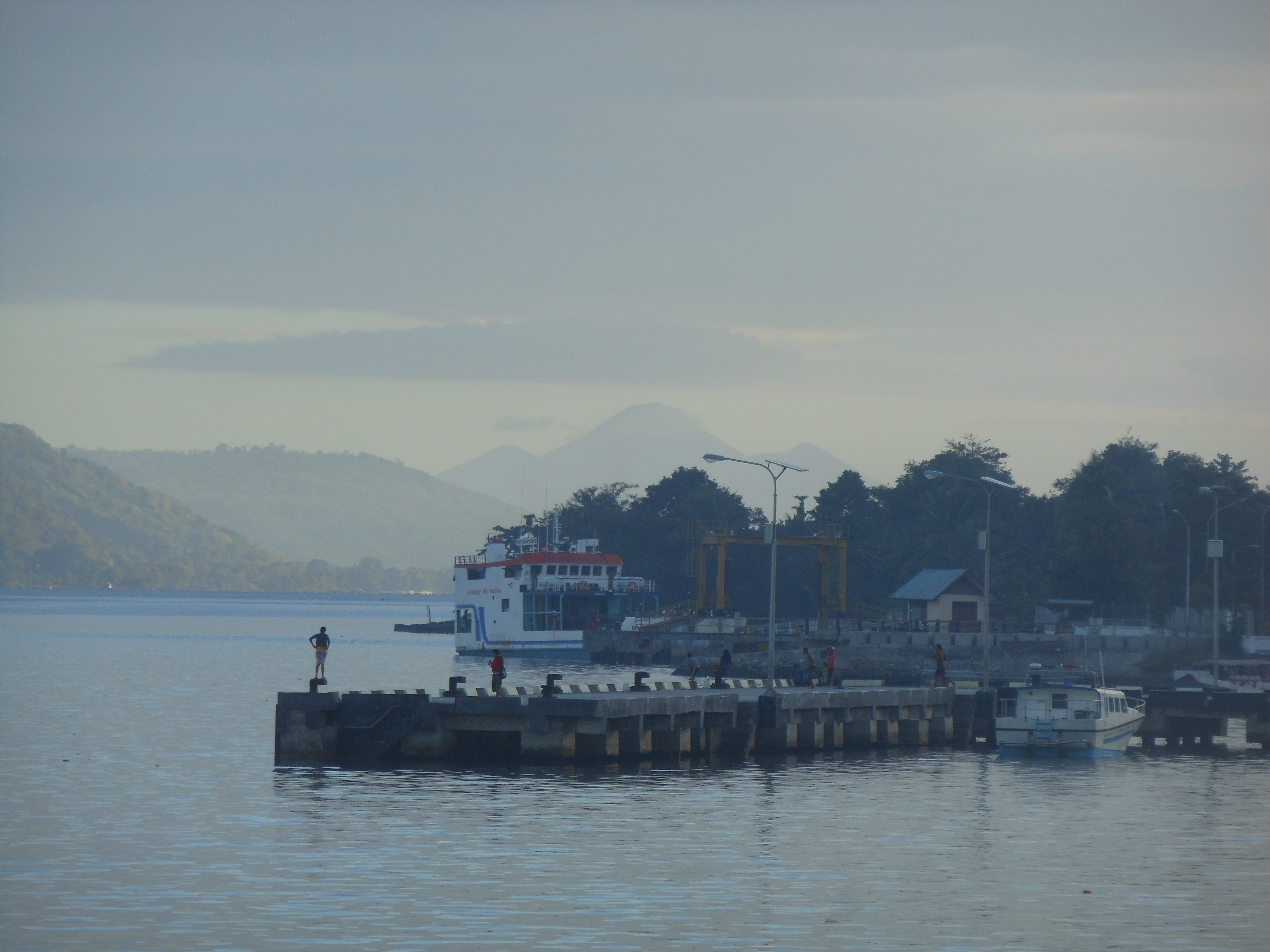 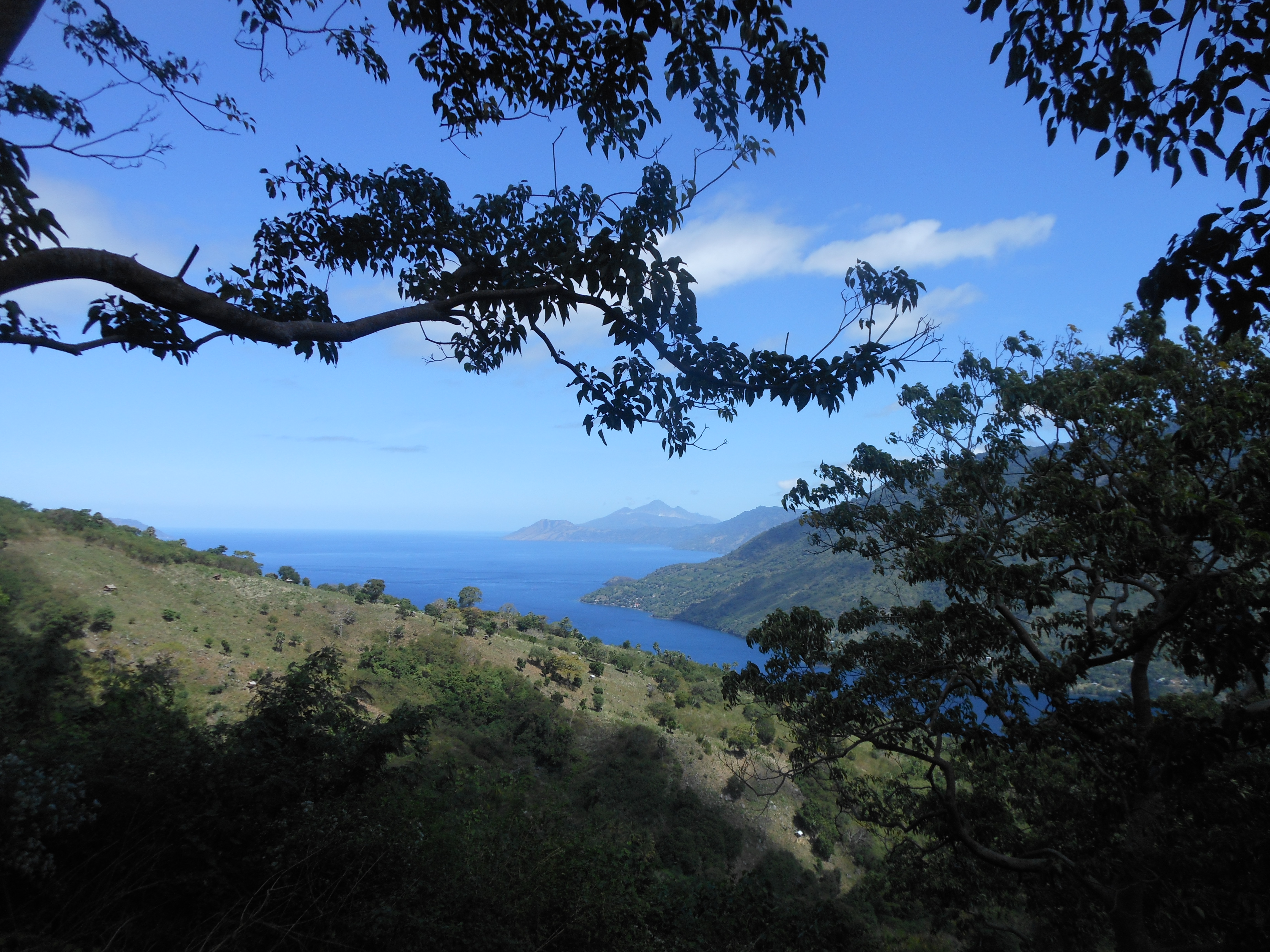 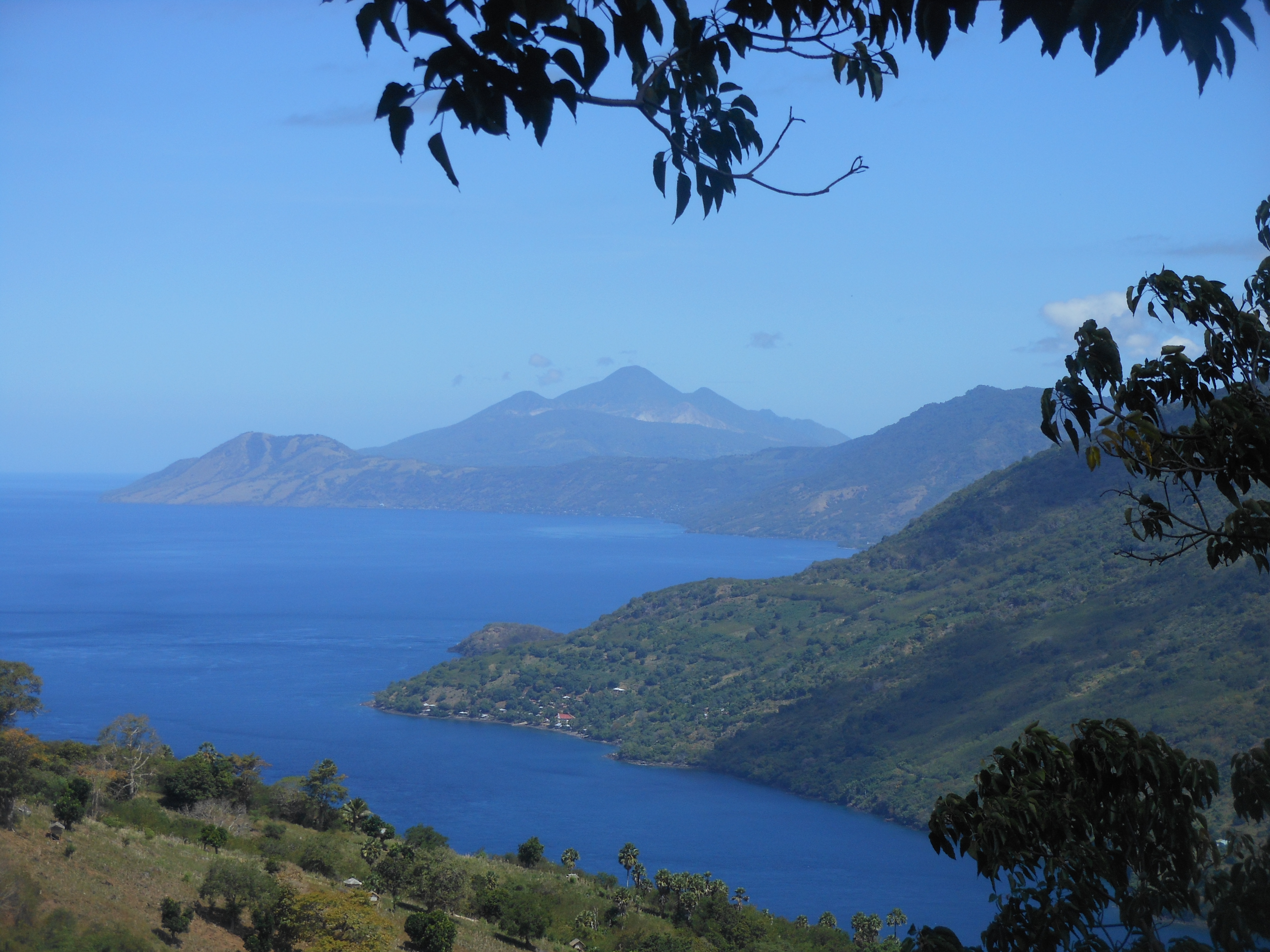 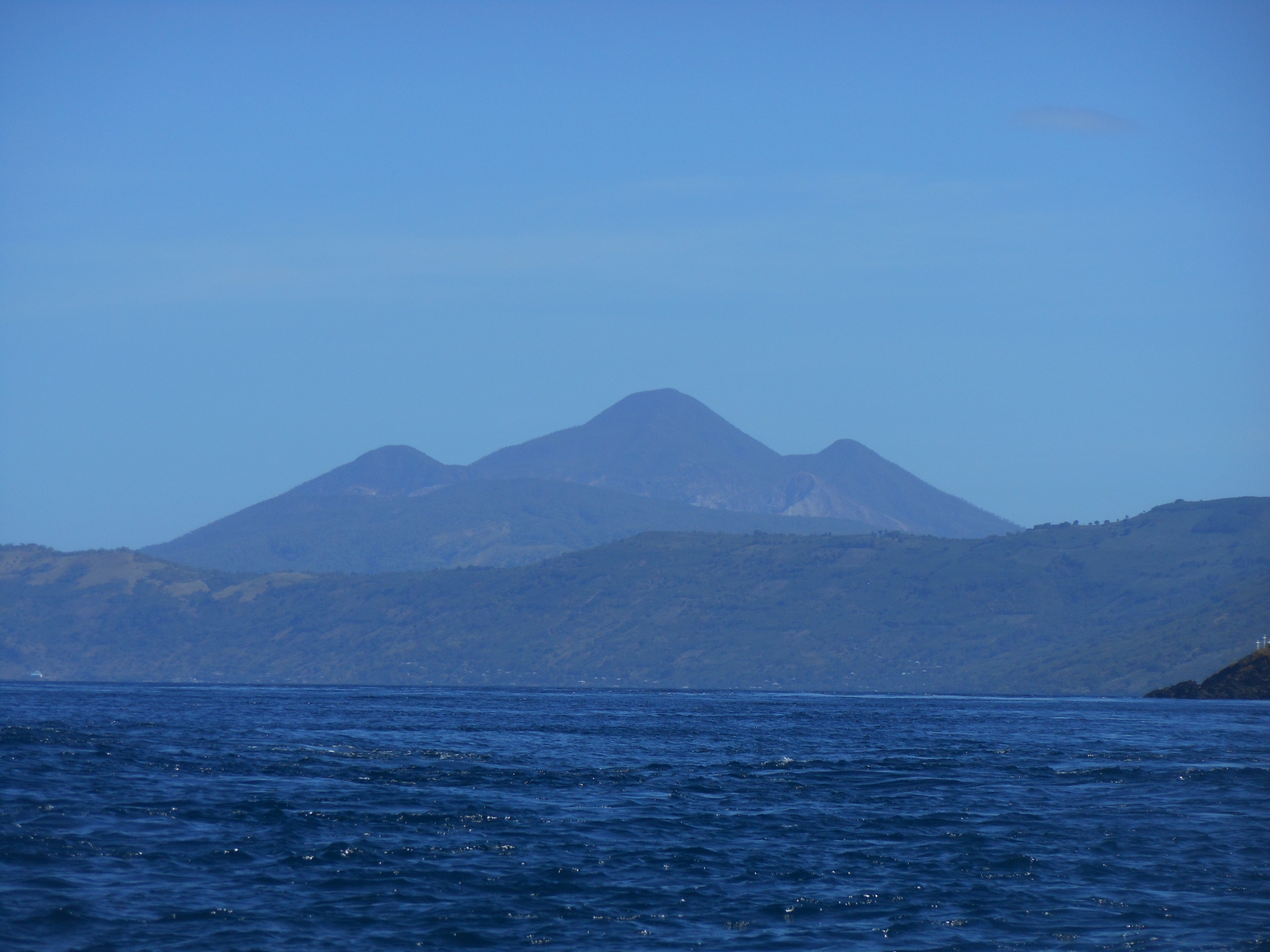 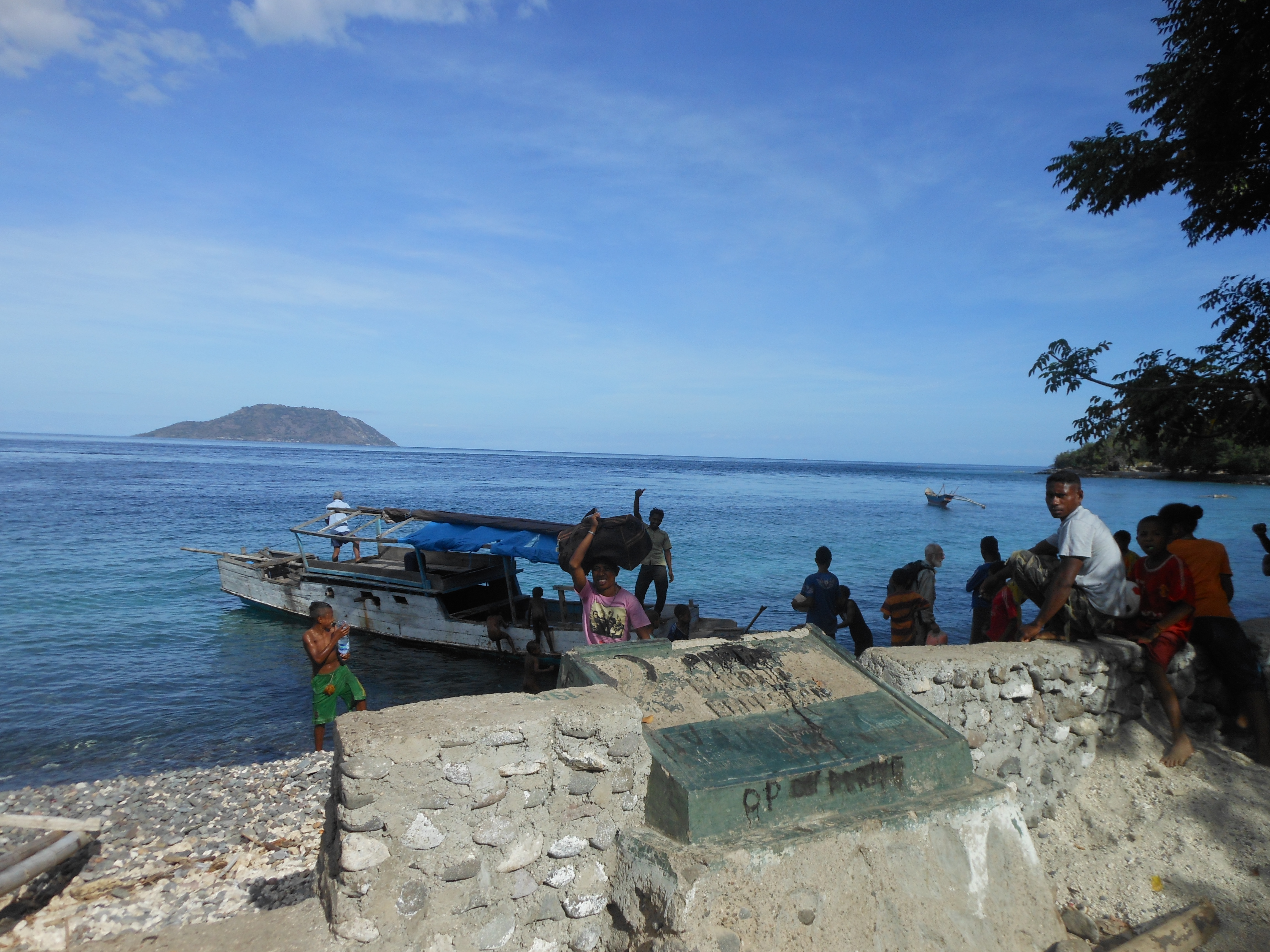 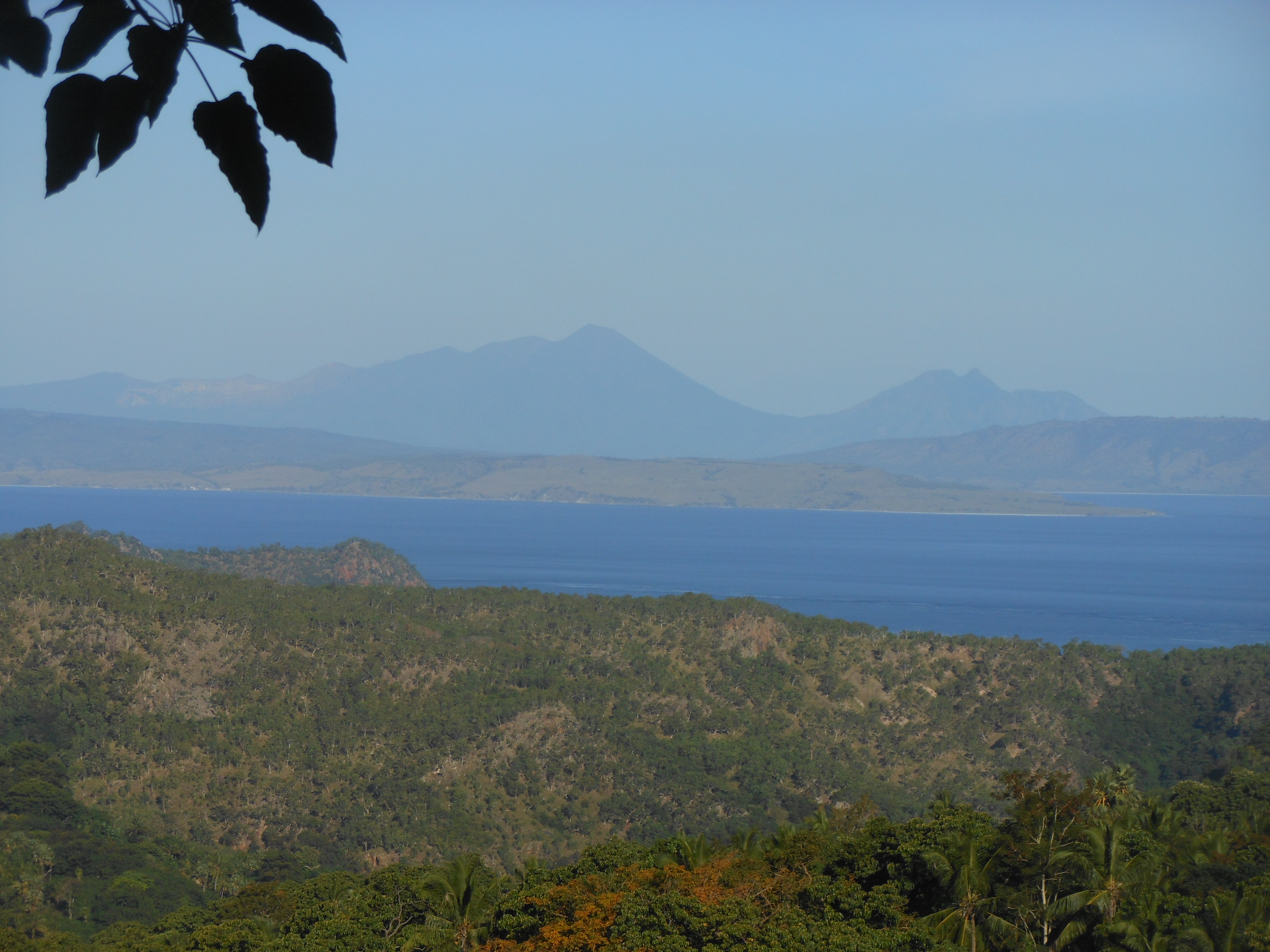 Gunung Sirung (862 m) is one of the less visited volcanoes of Indonesia, but one of the most fascinating. It is the (second*) youngest and northernmost of a chain of volcanoes extending from the south-western tip of Pantar north-east to Beang Bay. The volcanic chain is about 14 kilometres long. Mt. Sirung is the only active volcano of the range. The latest minor eruptions occurred in 2012. The other volcanoes are overgrown with vegetation, including the highest point.

There seems to be some confusion over the name of the highest point of the range which is also the highest point of Pantar Island. Different sources state ‘Sopak’, ‘Topaki’ and ‘Delaki’. But the usually reliable Bakosurtanal map for the area calls the highest peak – which is located around 2 kilometres south-west of Sirung crater – ‘Kukka Taupekki’. Bakosurtanal gives a figure of 1,344m and we would like to verify this with a GPS device.

The hike from Beang up to the crater rim is an easy 4 or 6 hours’ walk-up (the time depends on the route), mostly through beautiful eucalypt savanna. From the crater rim to the top of Kukka Taupekki, it is another 2 to 3 hours’ climb in pathless terrain.

From Beang, there are two routes to the crater of Mt. Sirung: one via Darang (Route 1), and one via Kakamauta (Route 2).

Route 1:
Starting from Beang, take the trail heading south to the tiny village of Darang,  where you will arrive in about 45 minutes. In Darang, the houses still have grass-thatched roofs. From Darang, a trail leads up the steep eastern slope of the volcano to the crater rim. Walking time is 3 hours. From where you arrive at the rim, you can head north-west, around the north-eastern side of the crater, to the canyon where the trail from Kaukamauta comes up.

Starting from Beang, take the trail leading uphill to the village of Kakamauta. The trailhead is just behind the houses in the centre of Beang. The path will give you a stunning view of Beang Bay and take you through savanna woodland with lontar palms and eucalyptus trees. Shortly before you arrive at Kakamauta, you will pass small cashew plantations. From Beang to Kakamauta, it is a 2.5 to 3 hours’ hike. Where the path forks below an open, grassy slope about half way up, take the left branch.

Having arrived in Kakamauta, follow the main street through the village, passing the church and the mayor’s office on your left, and the football ground on your right, until you get to a T-junction. Turn left and leave the village on the dirt road leading south-west. After about 15 minutes, branch off to the left (south) onto a narrow path leading through high grass. There is no signpost and the beginning of the path is hidden in the grass 1 to 2 metres above the road. You will find it near a couple of dried-up trees on your left.

Now follow the trail up to the crater of Mt. Sirung. It is an easy hike of another 1.5 to 2 hours. The first section will take you through eucalypt savanna. Then the vegetation diminishes owing to the rain of ash that fell on the upper slopes of the volcano during the eruptions of the past decades. Keep walking on the ridge above the canyon that leads to the crater rim. It is not dangerous in dry conditions. Finally, descend into the canyon and follow it upwards (the bottom of the canyon is almost even). Soon you will arrive at the huge crater.

Inside the crater there is a large sulphurous crater lake and several active steam vents. It is possible to descend into the crater, but you are not allowed to do so all the year round. The locals say you must not enter the crater from June to September, because, if you did, Mt. Sirung could erupt and destroy the cashew harvest. Similarly, you must not go down into the crater from December to April, because at that time of the year it would endanger the rice harvest. So you can do it in October, November and May only.

There is no trail to the summit of Kukka Taupekki. In order to get to the summit (after visiting the crater), go back down through the canyon until you can climb the ridge on your left (to the west), and then work your way up on the tops of the ridges and in the ravines. It will take you another 2 to 3 hours. A route leading on to the summit and, from there, down to Puntaru, the village of the Pasir Tiga Warna (“the sands of three colours”), has yet to be explored.

Guide:
If you want to hire a guide in Kakamauta, the author recommends Pak Feri Tai. You’ll find him close to the T-junction in the centre of the village. You can also stay at his house if you want to spend a night in Kakamauta and start your hike early in the morning.

* About 5 kilometres north-west of Mt. Sirung, you can observe how a new volcano is “born” – the Koralau: on a small, featureless hill, a gas eruption occurred for the first time in February 2011, burned the grass in the surroundings, and created a small crater of only about 10 metres in diameter.