This lovely mountain is located near Pangururan just to the west of Samosir island and Lake Toba. It is best known for the (very) hot springs (Aek Rangat) that are located on its lower slopes and as the place where the first Batak man was supernaturally born. It is therefore regarded as a sacred hill by many Batak people and is frequently climbed whether for spiritual purposes or simply to enjoy the tremendous views from the summit.

There are several starting points including from near Desa Limbong (1,080m) on the road to Desa Sarimarrihit which is southwest of the peak and about 1hr 30min from Tuk Tuk or 30min from Pangururan. To get to Limbong from Pangururan, head along the main road towards Tele, through Desa Boho, before taking a right turn. There is a registration Pos opposite the crossroads with a sign pointing to Batu Sawan – a popular prayer spot with holy water – on the right. Unfortunately the Pos is not always open, especially at night.

However, it is possible to continue further along the same road, take a right turn until you reach a narrow farm trail just beyond the Geopark / Birthplace of the Batak King (‘Perkampungan Si Raja Batak’, 1,250m). You are now west of the peak itself. From here (1,300m), armed with a GPS, you ought to be able to find your way to the top though the zig-zagging farm paths are narrow, muddy and slippery.

Be aware that the peak is deforested and therefore there is little shade to be found. The upside of this is excellent, panoramic views, as the trail winds its way round the peak offering vistas in many different directions.

Whilst the mountain has no obvious active crater as such, the hot springs on the north-eastern base of the mountain are evidence of considerable volcanic activity below. Indeed, halfway up the main trail you will be able to smell sulphur (1,709m).

The higher slopes of the mountain are quite lush and the views of both near and distant ridges is very pleasant indeed. You will probably meet local campers either on the summit itself, just north of the summit (1,883m), down near a large pond below the summit or even on a lower ridge to the left of the main trail. In the dark it can be difficult finding the way up to the summit as near the top there are many little paths and they seem to circle the mountain rather than going directly toward the summit. A bit of trial and error and you should be there in time for sunrise.

The highest point is crowned with a large white monument including numerous dishes and places to presumably leave offerings. There are also 3 flag poles and numerous pine trees. The views down towards Pangururan and Lake Toba itself are very impressive, especially in the early morning light.

There are two other worthwhile routes to consider. If you continue for about 1 kilometre beyond the Geopark you will reach a place where hikers can register on the west side of  the mountain and park their motorbikes. A further kilometre and you will reach Huta Ginjang (1,350m) which is another trailhead and could be combined with the Geopark trail if you leave your bikes at the parking area inbetween the two trails.

The Huta Ginjang trail leads straight up the north-western ridge to the pond where it meets the Geopark trail.

The other alternative is from the excellently-named Peabang (1,360m) which is south of the summit. Follow farm tracks as they zig-zag up the mountainside until you come out directly at the summit area.

Recommended as a straightforward and rewarding hike – even to the inexperienced – in one of Indonesia’s most fantastic regions. 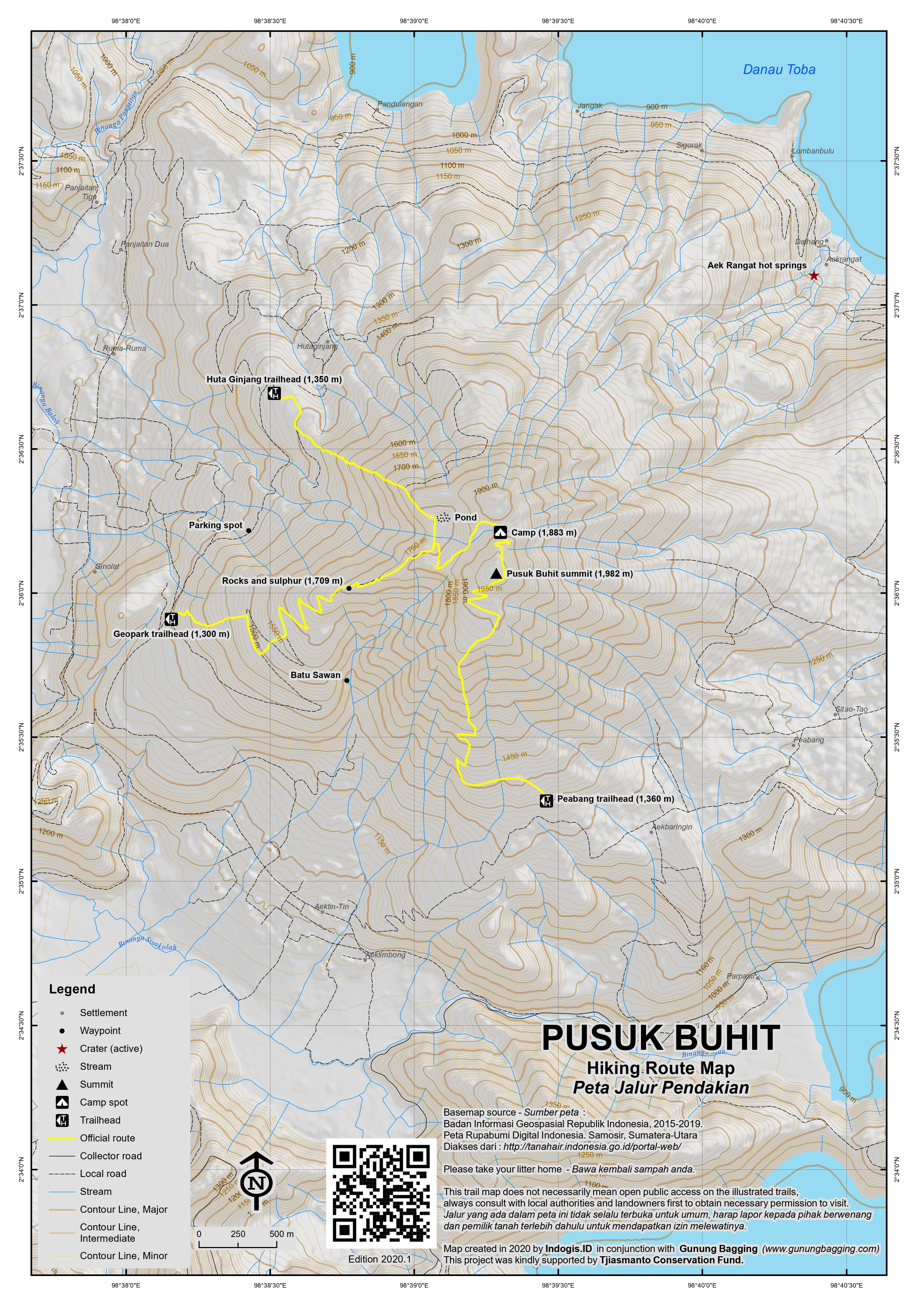