Banda Api is a small but very active island volcano in the remote Banda islands. It has been observed and written about for centuries since it was a key location for the trading of spice when the British, Dutch and Portuguese sought the vast quantities of nutmeg on these islands – particularly Run / Rhun island. The last major eruption was in 1988 but there remains minor fumarole activity near the summit.

Since the new fast ferry from Ambon started in 2016, tourist numbers have increased and getting to Banda Neira is a lot easier than is used to be. It is also a brilliant place to visit at the moment, with a perfect balance of adventurous tourists and friendly local people. The local food is excellent too, with nutmeg coffee, nutmeg tea, nutmeg jam and nutmeg pancakes, and so on! Based on the current 2017 fast ferry schedule you will need 5 or 6 days total to get to Banda and back from Java or Bali and this is an ideal length of time to spend in such an interesting and beautiful place.

Banda Api is less than five minutes by little boat from the market jetty in Banda Neira which is the most populated island in the group and where most guesthouses are. A boat crossing can easily be found for Rp10,000 throughout the day but if you want to start before light you will probably have to pay more.

An early start makes sense because the hike starts at sea level and there is little shade, probably because much of the vegetation re-grew after the 1988 eruption so there are no huge, shady trees here and the terrain is challenging, with steep loose volcanic scree. Three litres of water is recommended per person, to be on the safe side.

The trail starts to the right of a couple of houses and there appear to be no major junctions so once you are on the trail you should not have problems route-finding and therefore it can be done without a guide (but best not done alone). Allow around 4 hours for a return trip including rests en-route and at the summit (just over 2 hours up, just under 2 hours back down), although fast hikers might manage it in 3 hours total.

There are few notable landmarks on the way up other than a couple of signs and a shelter at an elevation of around 100m. When you reach 300m above sea level, there are some good views back down to Banda Neira town and airport, plus part of the crescent-shaped Banda Besar. From around 500m above sea level, the path becomes solid as you hike up what is presumably old lava flows. From here the views are magnificent – over to Banda Neira and its highpoint little Gunung Papenberg.

After a metal pole – possibly vulcanological equipment – the vegetation grows much sparser as you reach the highest parts of the volcano. Soon the summit can be seen straight ahead, just a five-minute walk away, past a couple of what appear to be small, shallow, old craters. Certain parts of the ground here are hot and smoke finds its way out of small crevises. Suddenly you are on the crumbly rim of the eastern side of the crater – luckily for those wishing to reach the highest point it is indeed the highest side. A couple of metal poles mark the edge of the rim in places, but extra care needs to be taken here as the drop into the deep crater is considerable.

From the rim and the summit, the views out west towards Pulau Ai and Pulau Run/Rhun are wonderful and looking roughly north you should be able to see little Pulau Manukang, the uninhabited island that is noticed first when taking the boat into Banda from Ambon. Some maps and sources of information give the summit elevation at around 666m, but this seems to be a little over what most GPS devices find. Perhaps some height was lost in the 1988 eruption.

The route back down Banda Api is the same as the ascent. Given the unstable and slippery terrain, some may find it harder descending than ascending. Once back down at the foot of the volcano it is usually pretty straightforward to find a boatman willing to take you back over to Banda Neira. You can always ask at one of the houses if there is no boatman around.

A few decent places to take photographs of Banda Api are worth mentioning. Firstly, from Benteng Belgica on Banda Neira. This view is actually on the brand new 2017 one thousand Rupiah note (replacing the image from Ternate and Tidore in Maluku Utara). Secondly, from Benteng Hollandia above Lonthoir on nearby Banda Besar (a ten-minute boat ride away). This is the classic shot of Banda Api from the south, from under a cluster of nutmeg trees and over turquoise sea. Finally, the view from tiny Pulau Neilaka, off Pulau Run, is gorgeous too, with Banda Api a perfect cone in the distance to the east.

For an interesting and informative account of the Banda islands and their historical significance read Nathaniel’s Nutmeg by Giles Milton. 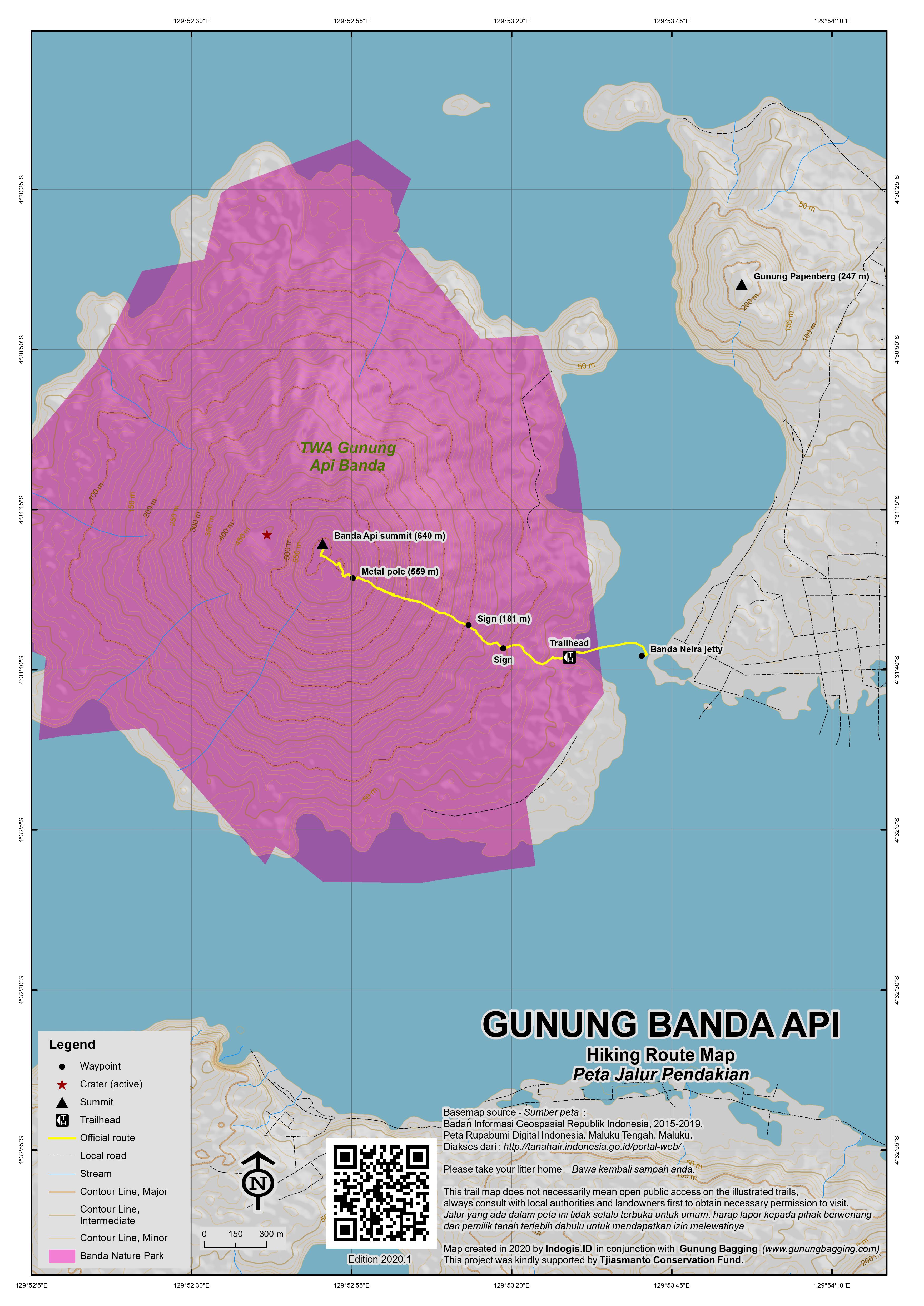