Along with nearby Gunung Dukono also in northern Halmahera, Gunung Ibu is a highly active and fascinating volcano well worth visiting by hikers and volcano enthusiasts. Just looking at the volcano on a topographic map suggests that in ancient times this was a fearsome place, with the villages to the north being located in what looks like a primordial outer caldera floor. A guide is essential as the terrain can be confusing and challenging – indeed, one French hiker tragically died on Gunung Ibu in 2015 after he became separated from his group and without sufficient water.

According to Smithsonian Global Volcanism Program, the inner crater, which is 1 kilometre wide, contained several small crater lakes throughout much of historical time. Since 1998, however, these lakes are no more as an eruption produced a lava dome which is growing to this day. In 2011, there appeared to be three minor domes, each about 100 metres across and also around 100 metres high from the floor of the crater. By 2021, the main growing parasitic cone in the crater was at least as high as much of the outer crater rim / wall, and if this continues to grow for several more years it will become the true summit of the volcano, replacing the outer rim highpoint on the western side!

The outer crater is 1.2 kilometres across and is breached on the north side, creating quite a view when seen from the villages to the north in clear weather. Up on the outer rim, an amazing display of “fireworks” is visible at night as well as from at Desa Goin, which is directly below the breach in the crater on the northern side. Indeed, some hikers choose to camp on the rim specifically in order to witness the incredible activity. Note that it can get surprisingly cold at night when camping on the rim.

There are at least two villages to the north from where a hike can be started from – Desa Duono (108m) and Desa Goin (100m) – with the trails meeting at a junction approximately halfway up. The Desa Duono trail is better known and slightly more frequently used, but overall they require a similar amount of time and are also similar in character. Both trails involve several kilometres of fairly flat walking through extensive coconut plantations with numerous wooden shelters and it is often possible to take motorbikes two kilometres or so to an elevation of over 200 metres. The trail then passes through nutmeg and cloves plantations before entering the forest at about 600 metres.

On the Desa Goin trail, a pleasant wooden shelter known as Pos 1 (675m) is usually reached after around 2-3 hours and is a great place to rest for a while. This spot used to be used by pig hunters to prepare the meat before returning to the villages below. The Desa Goin route then drops down to a ravine (655m) which is filled with black sand and boulders, and is the best chance of a water source, but only if there has been rain recently. Depending on the activity and the wind direction, it is often here that you will first hear rockfall and volcanic activity up above. If hiking at night it is particularly eerie and remarkable. The Goin route involves following this ravine for a couple of hundred metres before crossing over to the right side and into proper forest (673m).

The Goin and Duono trails meet at an elevation of 771m, though there is no sign here and this crucial junction is easy to miss. A couple of small grassy areas soon follow, which Desa Goin guides call Pos 2 (780m). The volcanology sensor station is passed on the right at about 800 metres though it may be hidden in the vegetation. Beyond this point, until recent years the track is was rarely used and overgrown, but by 2021 is steep yet clearly defined, assuming another group has been up in recent weeks.

Eventually, the track emerges on the western side of rim at around 1250m with some spectacular views into the crater. Black rocks fill almost every possible part of the crater floor. Follow the trail on as it skirts the rim before reaching a great viewpoint on the rim which also doubles as a camping area (1,315m). In clear weather, the views from the camp spot to the western coastline and back south to Gunung Gamkonora are excellent.

An old sign suggests this is ‘Gunung Tabaru, 1325m’ though both the name and the elevation are debatable. But the views and the sounds are utterly breathtaking. The main active cone, which now dominates the scene, billows enormous plumes of smoke along with an immense ‘whoosh’ every 15 minutes or so, with ash being deposited on the surrounding forest. At night, you can see an amazing and unforgettable orange glow every time this happens.

Back in 2011, fumaroles emitted gas continuously with ear-deafening screams. But in 2021, between the eruptions from the cone, there is a ghostly quiet, with weird rockfall noises sounding like hundreds of bottles being simultaneously smashed, or huge quantities of slates in a slate mine sliding, or plates and cups destroyed, in various different locations. It’s like a bull in a china shop, or rather several bulls in several china shops creating utter havoc! But the dark colour of the rocks makes it quite difficult to spot where the rocks tumbling are actually located.

The outer crater rim has two high points, one on the west (which is apparently the summit) and a second on the eastern side. The old US Army map lists the western top as 1,325m and the eastern top as 1,300m but based on satellite data and personal GPS readings these old figures are underestimates. Because the track emerges onto the crater rim on the western side, it is technically possible to reach the summit on the highest part of the steep-walled valley though in 2021 this would still require huge effort cutting through dense ferns and cane grass.

Currently, no hikers go beyond the camp spot and viewpoint, as there is no trail. What appears to be the summit is obvious and clearly visible and if there were a trail is might only require another 20 minutes of hiking. But to create a trail to reach that point would take half a day! Note also that as mentioned above, if the dome continues growing then it will potentially become the new highest point of Gunung Ibu, replacing the outer rim summit.

According to one local guide, before the ongoing activity which started in 1998, local hunters could do a circuit of the crater rim and even descend into the crater itself. But this was back when trees grew on the rim rather than more troublesome vegetation such as the ferns and cane grass.

Note that some local hikers call this mountain Gunung Tobaru/Tabaru, but on the old US Army map, Gunung Tobaru is a 1,035 metre high peak several kilometres further north, and also known as Gunung Loloda. Gunung Ibu is named after the Ibu tribe who first inhabited the area near the volcano but are now found living around Desa Gamlamo and have long since converted to Islam. The Tobaru tribe, on the other hand, originate from the highlands around Gunung Tobaru, Lake Todoke and Lake Togotoaka and now live at the base of Gunung Ibu. 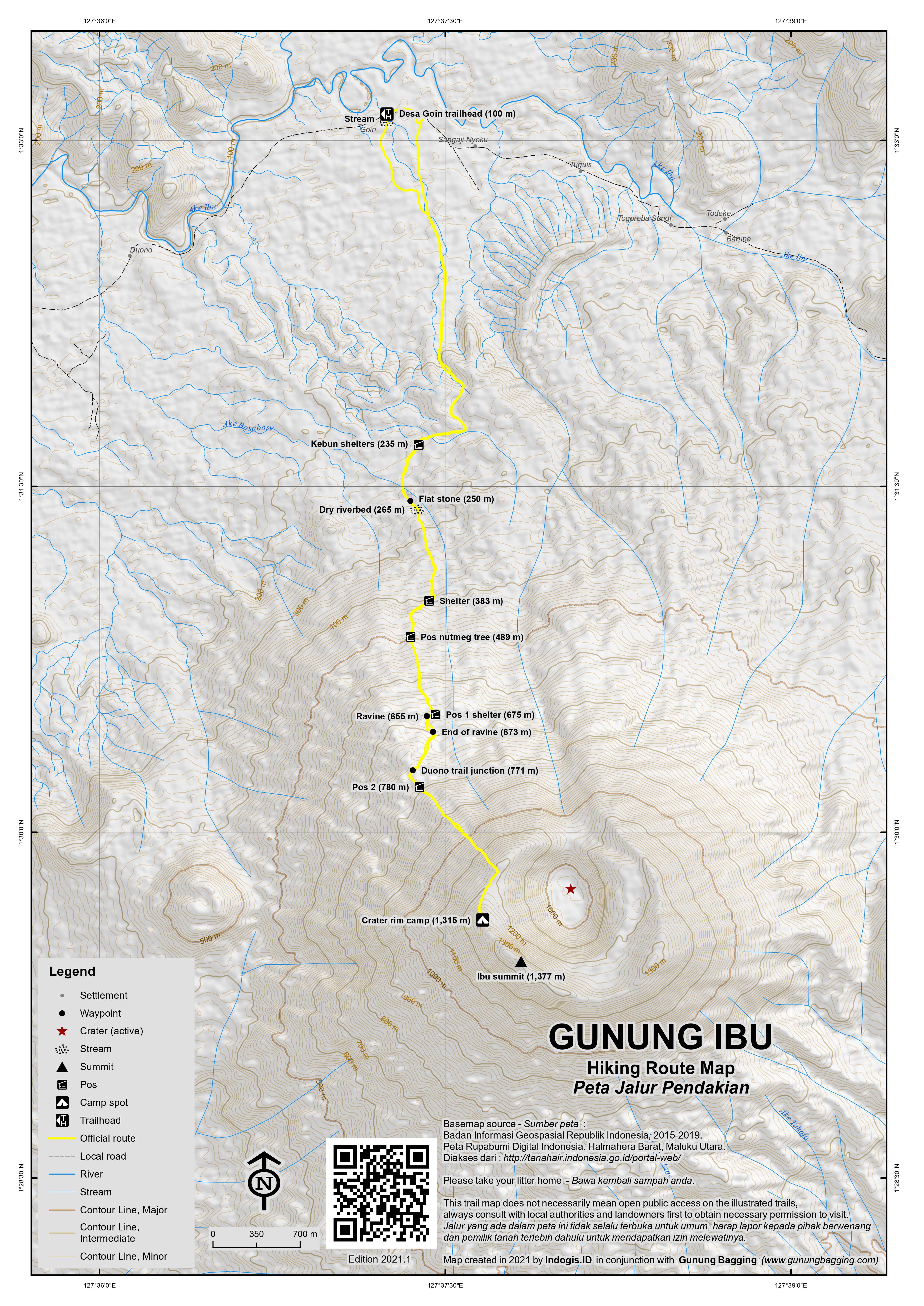