Gunung Wanggameti is the highest point on the island of Sumba and lies within the Laiwangi Wanggameti National Park which was designated in 1998. The island is very popular with birdwatchers, as there are 7 endemic species. Unlike much of Sumba, which has been deforested for a very long time, Wanggameti is thick forest – probably one of the largest remaining areas on the island. It is the most southerly Ribu, and therefore one of the closest to Australia (roughly 700km away).

The mountain is just one extra reason to visit what is one of Indonesia’s most unique and fascinating islands. Megalithic tombs, stone carvings, wonderful architecture, ancient belief systems (do some research on the ancestral ‘marapu’ religion), traditions such as the Pasola (an annual battle between rival horsemen) superb ‘ikat’ (possibly the finest cloth in Indonesia) and grassy, limestone landscapes quite unlike the rest of the country.

Until recently, hiking to the summit was only done by locals out hunting for the many wild pigs (‘babi hutan’) and smaller number of deer (‘rusa’) that live in the forest. However, the National Park authorities have recently put up a sign at the entrance to the forest and a second sign at the summit itself. Between the two is a freshly-cut, wide trail, leading up and down for seven kilometres from the forest entrance to the summit. There is no litter on the trail.

One important thing to bear in mind when considering hiking up this mountain is that the number of leeches in its forests is very, very high indeed during the rainy season. Much higher than peaks in Kalimantan and Sumatra. Unless you really don’t mind picking leeches off your legs every couple of minutes and then itching and bleeding for several days afterwards, it is advisable to visit during the dry season (May-October).

Allow 4 hours to reach the trailhead by car along bumpy roads from Waingapu. After having passed Tanarara (you’ll see the police station, the PLN electricity office and a cluster of stone carvings and megalithic tombs / monuments on either side of the road) you need to take a right at the next junction and further along another right beside a wooden building painted green. In the likely event that you need to ask for directions, ask for Desa Wanggameti, the village on the higher slopes of the mountain.

You will know you have reached Desa Wanggameti (1,023m) when you see a public telephone sign at a road junction. If you still need a local guide, take a left to the wooden house next to the stone monuments and ask there. Otherwise, take a right up past the National Park entrance booth (1,056m – almost always un-manned) and up a further 1.5km or so to the starting point which is clearly marked with a sign on the left side of the road (1,160m).

Despite the high elevation of the trailhead, there are lots of ups and lots of downs between the trailhead and the summit, so bear in mind that hiking back will be about as tiring as ‘up’ there initially. The trail drops to about 979 metres at its lowest point.

There are lots of species of trees identified with little signs made by the National Park staff. The forest is dense but there are occasional places where you may catch a glimpse of lower lying land or even the coast in the distance in clear weather.

All in all, Wanggameti is not a world-class mountain hike by any means, but is a brilliant extra reason to visit Sumba alongside the megalithic tombs and carvings and the unusual (for Indonesia) landscape. It is also home to some of the friendliest people. In addition, the work of the Taman Nasional Laiwangi Wanggameti should be supported and people including Tri Wiyanto congratulated for doing an excellent job of publicising it. 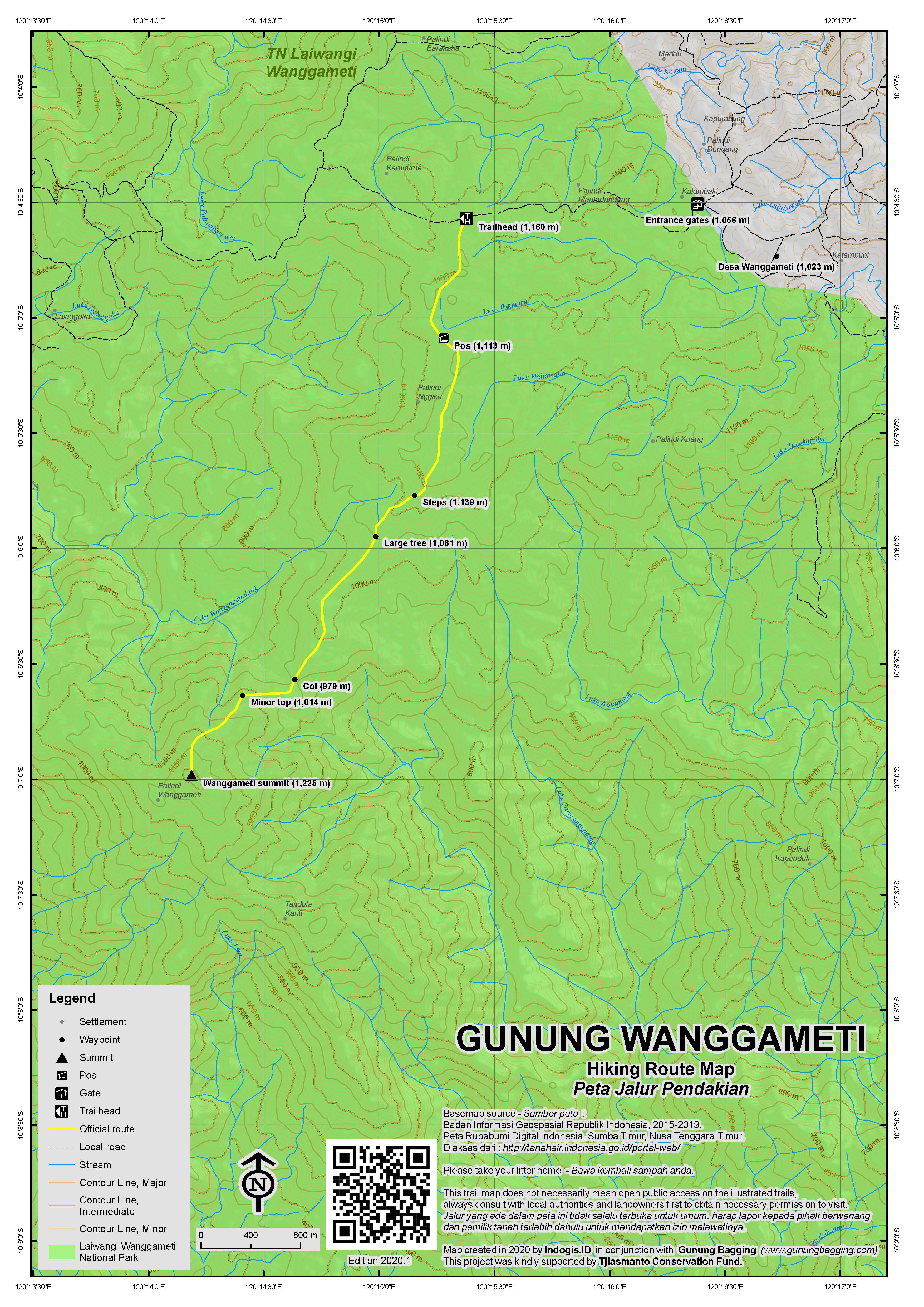