Local student hiking groups have reached the top of the mountain, which is more commonly known as Gunung Galang than Gunung Dako. There are apparently 2 or 3 different routes, the quickest of which requires 2 days to reach the top (so presumably a day or day and a half back down). The city and airport of Toli-toli is only 20km away.

The main two possible routes are from Dusun Teluk Bone and Dusun Labengga. However, Teluk Bone is by far the most popular of the two as the route is much easier (the Labengga route is described as extreme). Teluk Bone is not far from Toli-Toli airport, at the end of the road beyond Desa Kinopasan. The starting point appears to be around 400 metres above sea level.

According to the Bakosurtanal map, Bukii (Gunung) Galang is 2,253m and Bukii (Gunung) Dako is second highest at 2,162m and less than 1 kilometre further south-east. Gunung Galang looks pretty accessible as the edge of farm fields is only around 3 kilometres as the crow flies from the peak. 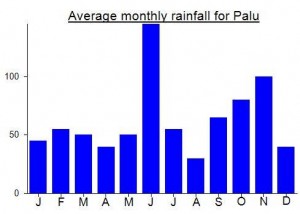