Pangulubao is one of North Sumatra’s most accessible mountains and makes an excellent day hike. The trail makes its way through verdant broadleaf, pine, and sphagnum moss-covered forest, which is in excellent condition. The area is famous for its endemic climbing pitcher plants (Nepenthes spp.) and also numerous species of orchids. During the hike you’ll hear black gibbons calling and crashing around in the trees, and if you hike to the less visited trig pillar area you have a very good chance of seeing them.

The starting point for the Pangulubao hike is approximately 16 kilometres or 30 minutes drive south from Parapat, which is a bustling transport hub on the shore of the majestic Lake Toba. Parapat itself is approximately 4.5 hours drive on good roads from Medan, the provincial capital (via Tebing Tinggi and Pematangsiantar) or 1.5 hours from Silangit Airport south of Lake Toba. Parapat is the gateway for tourists take ferries across Lake Toba to Tuk Tuk, the resort town on Samosir Island.

It is recommended to book a Taman Eden guide/porter, which will be one of the local staff from the garden. If you are not proficient in Bahasa Indonesia, you might prefer to arrange this in Parapat using one of the handful of travel agents / money changer offices. These are found on the street just next to the ferry/boat terminal for boats across Lake Toba to Tuk Tuk. They can arrange the angkot charter, book the Taman Eden guide/porter, and arrange for a boxed lunch for the hike. Make sure that you explain that you want to get to the Pangulubao stone pillar, not only to the popular viewpoint halfway. Very few people actually go to the trig pillar, and it’s better to have a guide because while the trail is fairly obvious, it is quite challenging in a few place as you clamber over and under fallen trees and even through the boles of some huge old trees. It’s a fun hike through “real” forest, but the trail does require you to get down on your hands and knees many times.

The starting point at Taman Eden is already at 1,245 m, and the trig pillar is at 2,151m so it is only 900 m elevation gain. The trail makes a very easy and gentle start and is extremely good because it is managed by the garden. There are number of other attractions in the garden, such as a small orchid garden and waterfalls, but you simply follow your guide or the signs for Bukit Manja. After approximately 1.5 hours, the trail becomes much steeper as you climb out of an area of predominantly pine forest. After 2 to 2.5 hours you should reach the Bukit Manja viewpoint and camping area, which is at 1,760 metres and just beyond the steepest section of the trail which is best negotiated by using the small ropes for a short section. From Bukit Majna you can see the extensive forest on the slopes of the mountain, and also down to the valley containing the road and the huge expanse of Lake Toba. This is where most people end their hike and return to the carpark or go to the waterfalls. Keen gunung baggers and modestly fit people should be eager to press on into the increasingly dense and mossy jungle. The trail is clear all the way to the trig pillar, but sometimes disappears until you realize you have to crawl through, under or over an old tree or some deadfall. Look out for orchids, pitcher plants and black gibbons. Another 2 hours should be enough to reach the pillar, which was constructed by the Dutch in colonial times.

The pillar is about as far as any hikers go – even reaching this point is pretty rare! However, the true highest point of the mountain is still nearly 2 kilometers away in dense, truly wild forest. We haven’t heard of anyone having been to the highest point and it would probably require an expedition to do so. The Bakosurtanal map suggests the true peak is as high as 2,215m – but this might be an overestimate.

Hikers shouldn’t mind too much that the true peak is difficult to reach, for although the Ribu cannot be bagged in a single day the climb to the pillar and back is a splendid day hike. The return route to Taman Eden is much quicker – even including time to take a well earned rest at the viewpoint at Bukit Manja, you should easily be back from the pillar in 3 hours.

To return to Parapat, and probably back to Tuk Tuk for some well-earned rest and relaxation you can easily take one of the Colts making the return journey along the main road outside the Taman Eden 100 garden. 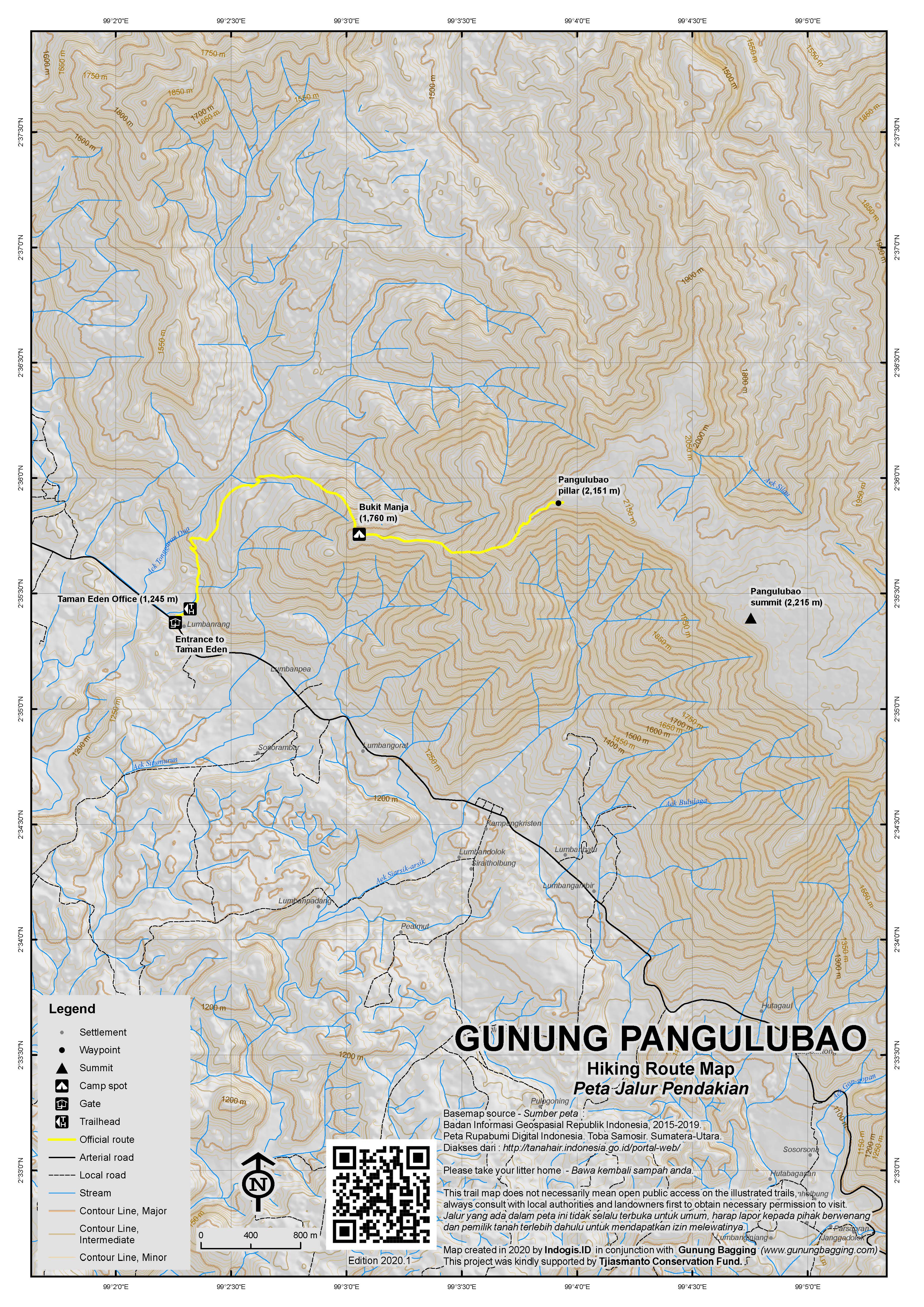 The mountain of village chiefs (Geleng, guide from Brastagi, 2011)