Gunung Tajam is the highest mountain range on the pleasant island of Belitung. Just as on neighbouring Bangka island, there are two peaks of very similar height in the range. However, they can both easily be bagged in half a day from the capital of Tanjung Pandan and nearby beach resorts.

Access to the mountain range is from the main road at Kacang Butor about 15 or so km to the east of the airport junction. This takes less than an hour to reach from the main town. The minor road is well signposted with two mentions of the TVRI / Televisi tower on one of Gunung Tajam’s highest peaks. The two peaks are described locally as male and female (Tajam Laki – ‘sharp male’ and Tajam Bini – ‘sharp female’) but sources are not unanimous on which one is which. Follow this minor road as far as you can and park at the dead end near a river and bathing area (173m).

From here, a very clear trail leads up through pleasant forest to a peak with numerous ancient Muslim graves on it (from this point referred to as ‘Grave Peak’, ‘Grave summit’ or ‘Puncak Makam’), the most important of which appears to be that of Sheikh Abubakar Abdullah, who was responsible for spreading Islam on the island. You can be up at the top in between 1 hour and 90 minutes, although look out for the splendid views (and also some pitcher plants – Nepenthes Reinwardtiana) on the right side of the trail before reaching the peak itself.

At the top of the Grave summit (roughly 510m) is a shelter, a mosque, some signs plus several ancient graves apparently including that of a cat. There are no views here as the woodland is fairly dense. However it is probably the higher of the two peaks and therefore the highest on the entire island of Belitung.

You can be back down at the trailhead in 45 minutes or so, not including breaks for photos and snacks. Some may wish to bathe in the river before continuing.

To reach the other peak of a similar height (recommended both for the views and for the contrast), head back along the minor road until you quite soon reach a junction on the right with a tiny signpost for ‘TVRI 3.5km’. It is a 20 minute bumpy motorbike ride up the potholed track to the summit of this second peak (from this point referred to as ‘TVRI Tower Peak’ or ‘Puncak Menara’) or a walk of probably about 60-90 minutes. This track starts in rather poor condition and is steep in a few places but most keen motorcyclists can manage to reach the top without harming their bikes.

At the top you will be rewarded with excellent views in several directions, including to the coastline and mostly strikingly back to the Grave summit. There is a rope hanging over a wall at the last sharp bend before reaching the tower itself – this may lead to a faint trail direct to the Grave summit.

Behind the tower is an area with a small cement pillar on it. According to GPS data this appears to be the highest point of TVRI Tower Peak at roughly 508m. However, both peaks are listed as 510m on archival US Army Mapping Service (AMS) maps from the 1940s so keen baggers will be pleased to have visited both tops.

With a motorbike you can be back in town from the Tower Peak in less than 90 minutes or at the airport in about one hour. 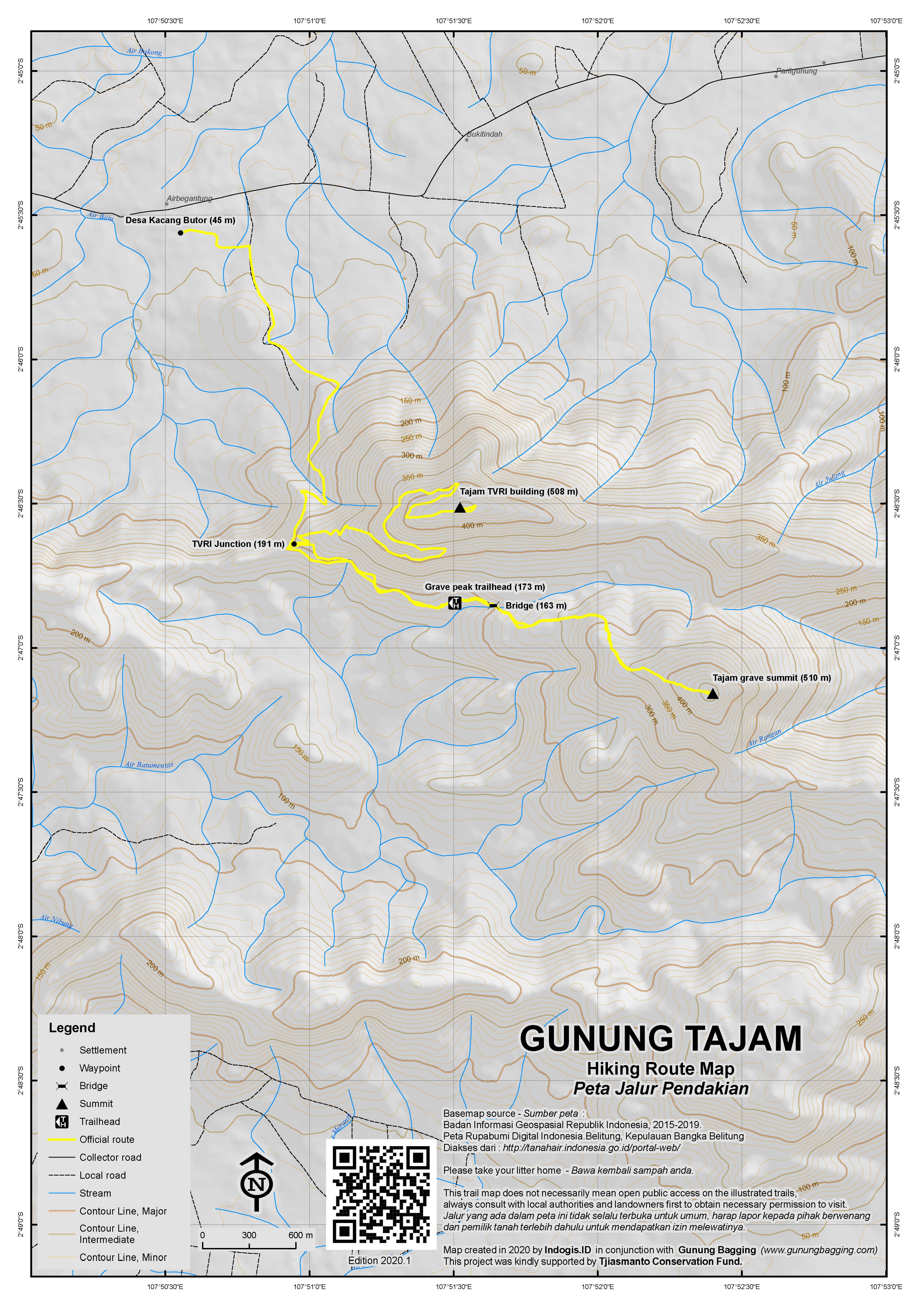 Gunung Tajam = Sharp Mountain. Clearly describing the shape of the two highest peaks of the range.