It’s probably this region’s most challenging trek and the word ‘tahan’ means ‘endure’ which is certainly rather apt! There are two main trailheads, with one route being longer and requiring a lot more time than the other. The views from the higher slopes of Gunung Tahan are excellent, as the vegetation is mostly low-growing shrubs rather than tall trees.

Elephants and tigers still live in this region, though the chance of seeing any is very, very small. You will almost certainly meet plenty of sweat bees although they are relatively harmless unless they get stuck inside your shirt. If you are especially lucky you might spot one of the elusive golden cats on your trek.

The newer, shorter route is 18 kilometres long (ignore the blatantly incorrect 32km signs!) and starts at Kuala Juram, which is a 40-minute 4WD journey from the Park Office at Sungai Relau which is itself just under 7 kilometres from the small town of Merapoh. A return hike is usually done in 4 days and 3 nights although as of 2022 you are required to book and pay for 5 days and 4 nights. This is to avoid less fit hikers rushing or hiking in the dark in order to make it down for their transport.

Obviously, the best hike to do is a traverse from one side to the other and most who do this seem to opt to start in Sungai Relau and finish at Kuala Tahan so that the lengthy Kuala Tahan route is more descent than ascent. This is supposedly around 71km in total and apparently the standard National Park requirement is that it is done over 7 days. Some groups may need longer.

The below is a brief overview of a return itinerary starting on the Merapoh / Sungai Relau side, with additional information on the traverse.

Day 0: Get to Gua Musang or Merapoh by train or bus. Consider staying at Merapoh Adventure Homestay – a spacious house suitable for a group of up to 10 people.

Get to the Park Office in Sungai Relau for a safety briefing, a time-consuming and thorough check of all your unpacked belongings before entering the National Park forest (this is checked again at the end to ensure that zero litter is left in the forest – be aware you may be fined). Travel 13km by 4WD along the National Park road to the Kelah fish sanctuary at Kuala Juram (205m) and begin the hike towards Kuala Luis (240m). This includes 4 river crossings with ropes, the deepest of which is at Kuala Luis itself. Start the proper climb here to Lata Luis (520m), the waterfall and then Kem Kor (685m) which you should have reached in around 4 hours plus breaks. Most groups doing either the traverse or the shorter return trek tend to stay at Kem Kor for the night, in both directions, as it is a large site with many flat areas just next to the river. However, stronger groups could potentially reach the much smaller Kem Kubang if they manage to get the administrative issues dealt with swiftly and can therefore start early enough. Not only would this mean an easier second day, but also less noise from other groups at the every-busy Kem Kor.

A long and arduous day, especially for those with large backpacks. After a river crossing just beyond Kem Kor, it is a further 3 hours or so to Kem Kubang (1,375m). There are a couple of ladders in place on especially steep terrain just before reaching Kubang. From Kubang, it is about 30 minutes to Belumut which is much less ‘mossy’ as the name might suggest and much more ‘muddy’. From Belumut to Bonsai is a further 3 hours of squelching through deep mud. From Bonsai, the terrain improves and the views open out in all directions. Bonsai to Botak is 1 hour on increasingly stony ground and Botak to the summit is a further 1 hour, though most groups camp at Botak and use head torches early the next morning in order to the reach the summit for sunrise at around 7am. The last water source is at Camp Botak (1,935m) but if you can make it to the summit (one further hour) then it is obviously preferable for sunset photos should you have fine weather in the late afternoon. Sections of mud exist all the way to the summit so sandles are not recommended even just for the final hour to the summit.

Day 3: Summit-Botak-Belumut-Kubang-Permatang-Kem Kor. 6-10 hours of hiking, depending on weight of backpacks and fitness levels.

Those returning to Sungai Relau tend to be at the summit for sunrise on Day 3 before the long trek back down to Kem Kor. The time requires varies widely based on the strength of each hiker after the previous challenging day.

The short 4 hours back to Kuala Juram to meet the 4WD back to the Park Office for bag checks.

The traverse: For those continuing over to Kuala Tahan on Day 3 after the summit, camp spots will depend on the strength of the whole group. From the summit to Gunung Gedung is around 4 hours. Gn Gedung to Gunung Reskit is 1.5 hours. Gn Reskit to Gunung Pangkin is 3 hours  and Gn Pangkin to Wray’s Camp (1,095m) is 1 hour. Wray’s Camp is named after a member of the 1905 Herbert C Robinson expedition here who were the first recorded hikers to have reached the peak, requiring two weeks in total. Unfortunately, Mr Wray was stuck here with diarrhea and didn’t make it to the summit. Wray’s Camp to Kuala Teku takes around 3.5 hours. Kuala Teku to Kuala Puteh (160m) requires around 5 hours and no less than 7 river crossings (some sources state 9 river crossings!) Watch out for leeches here. Next, ascend to Gunung Rajah (about 2 hours), and on to Kem Tengah (a further hour). From Kem Tengah to Kuala Melantai takes around 4 hours and involves crossing the 27 minor hills of Bukit Malang. It is then around 5 hours to reach the Park Resort from Kuala Melantai. Stay the night at the National Park Resort before transport home, probably using bus or train from Jerantut. 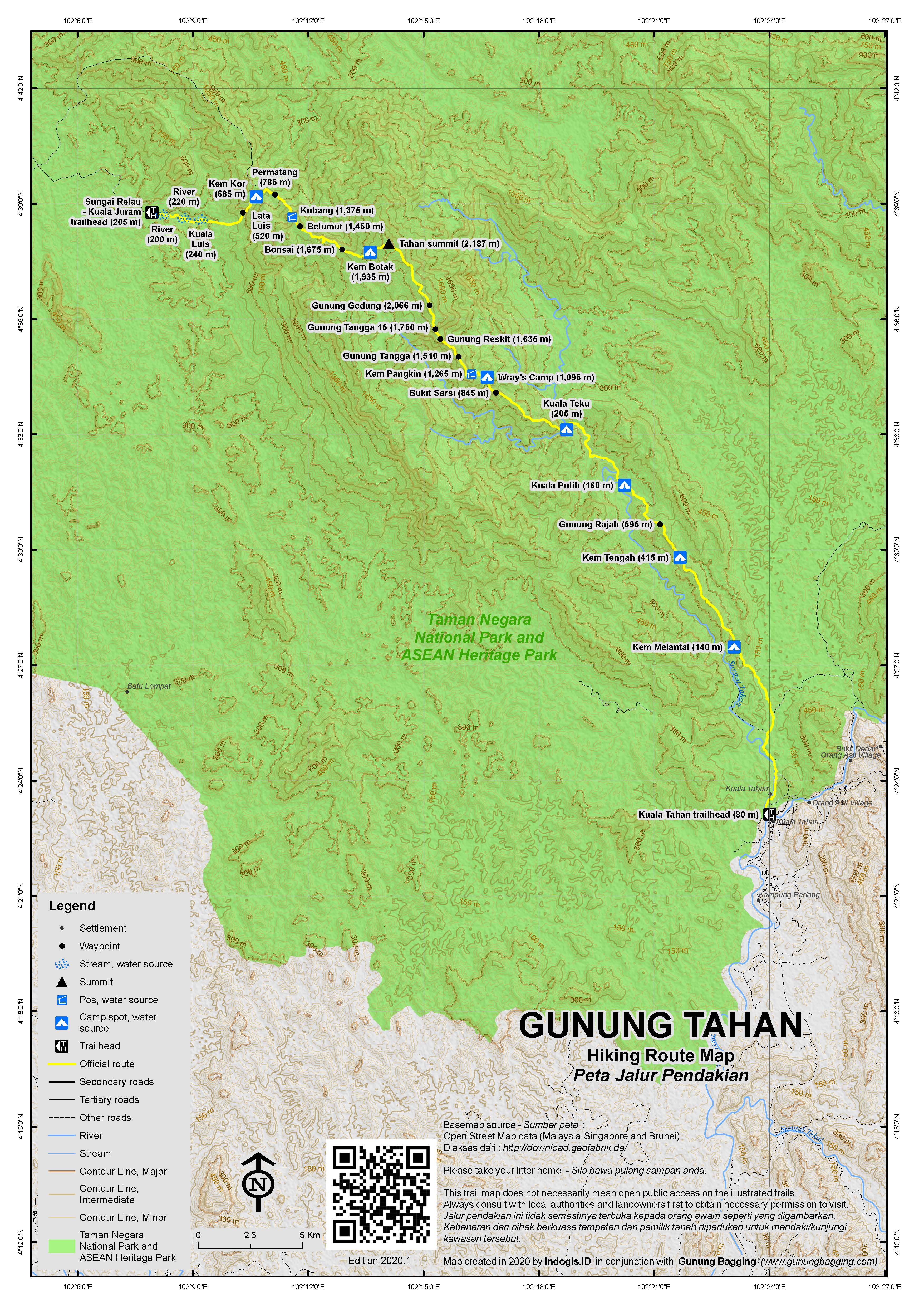