For hikers spending a few days in the Kuching area, Gunung Santubong is a great half-day out, and even closer to Kuching city itself than Penrissen, for example. It is a very steep hike, starting from close to sea level, so 3 litres of water per person is advisable. The main entrance to the Gunung Santubong National Park is out on the road to Damai Beach and registration is free (in 2018). The staff will give you a simple map and you need to start out as early as possible not only to beat the worst of the mid-day sun but also to have enough time to start your descent before 3pm which is what staff will request you to do.

In reality, a hike to the top is more than most visitors to Santubong National Park can handle, so they simply enjoy the lower section of trail, looking for pitcher plants and jungle wildlife. The most direct route to the top is actually via Bukit Putri, a trail which starts opposite a layby on the main road a couple of kilometres before the main National Park entrance. This starting point is easy to find if you know roughly where it is, but there are no official signs because Park staff do not really want hikers to use this route to the top (though it makes a great route out for late finishers, or the exhausted who have friends who can pick them up from here).

Fit and experienced hikers can be at the top via Bukit Putri in about 2.5 or 3 hours. If using the official National Park entrance then you need an extra hour or so (therefore 3.5 or 4 hours). Less experienced hikers will need more time. The two trails meet at a well-signposted junction (290m). The ‘summit’ trail is very steep in places, with near-vertical ladders attached to rocks.

About 30 minutes before what Park staff call the summit is a shelter (700m). The trail drops down a little after this before the final push up to the top. There are pitcher plants on the ridge near the top and some great views of the Santubong River and eastwards to the Bako peninsula. There is also a ‘summit’ shelter, a sign with ‘810.2m’ written on it and a tiny pond but the water is not to be used except in an emergency.

Most hikers, such as the many local and international tourists who reach this top, have no idea that the true summit is a kilometre or so to the north, and very rarely visited. The visited summit is known to local hiking enthusiasts as ‘Summit 1’ (810.2m) but ‘Summit 2’ is the highest at around 850m.

There looks to be a vague trail initially on the ridge between the two, but you really need to go with an expert who has been here already. The trail to the true summit is likely to require 10 hours or so there and back, so a really full day out. It can also be hiked from the west near F2 on the main trail.

There are actually another 5 summits on the Santubong peninsula, so 7 in total, not including a great viewpoint called Summit 4.5. 1 and 2 are the highest ones (over 800m), and 1 is the only trek on a well-used and official, proper trail. Summit 3 (787m) appears to be growing in popularity and is only a little way south of Summit 4 (740m). Summit 4.5 (556m) is regarded as a great viewpoint and is usually hiked separately from north of Sarawak Cultural Village. Summits 5, 6 and 7 are further north towards the tip of the peninsula and are not commonly hiked. 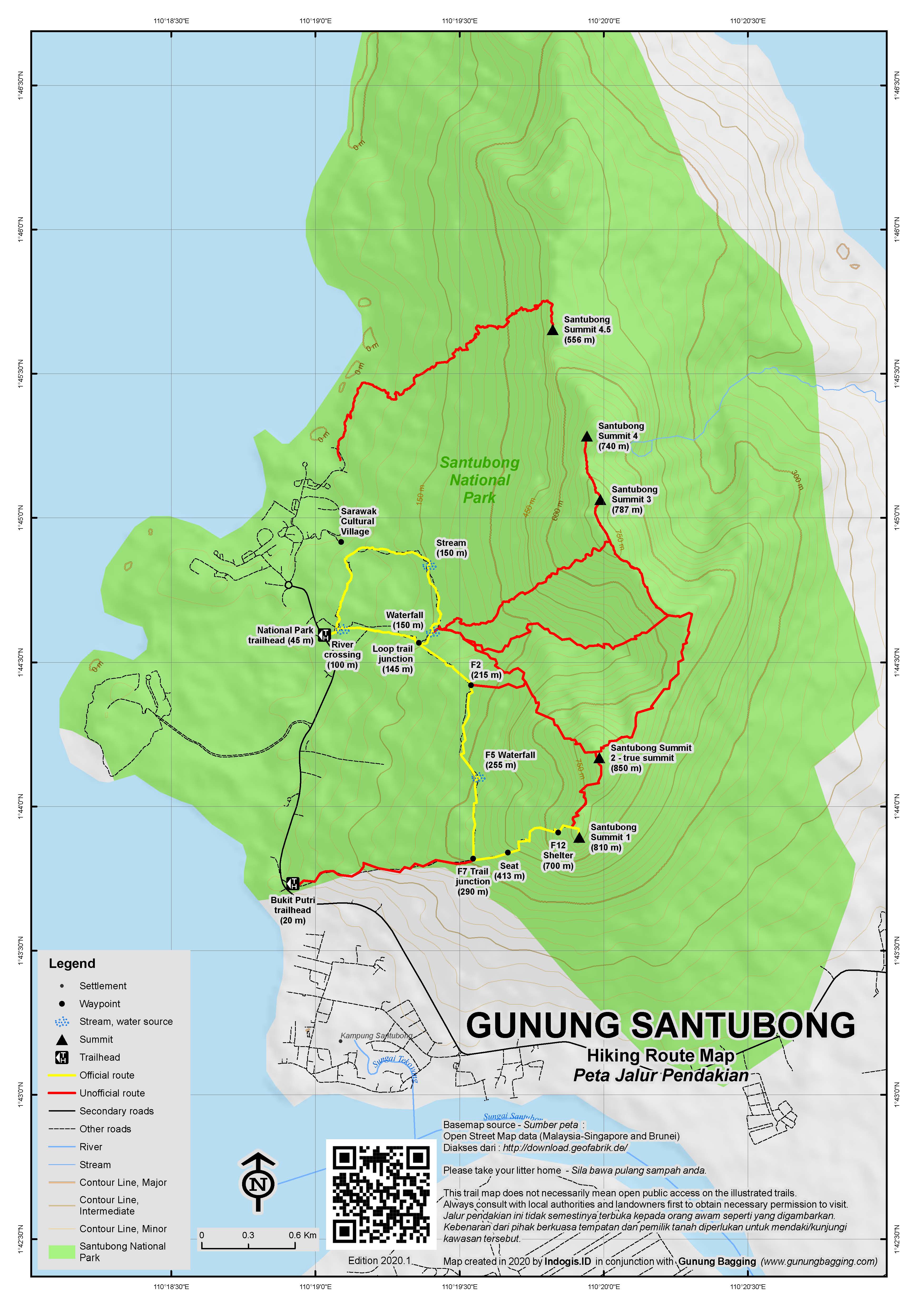