Batu Lawi is one of Borneo’s most iconic mountains, with two steep summit pinnacles. It can be clearly seen from the small aircraft that fly daily from Miri to Bario. The lower ‘female’ one of the two is about 1,850m whereas the taller ‘male’ peak is around 2,046m above sea level. The mountain is of great significance to local people including the Kelabit and the Penan and they successfully campaigned to have it included in the Pulong Tau (‘our forest’) National Park which also covers nearby Gunung Murud. However, the foothills of the great mountain have been heavily scarred by logging activities over the years.

The city of Kuching fell during the Japanese occupation in late 1941, and much of coastal Borneo was under Japanese control by early 1942. The self-sufficient Kelabit Highlands were a different story, being so remote and rather far from the coasts. Batu Lawi, being so iconic, was known to the Allies as ‘Mount 200’ and used as a key landmark for aviators flying over the interior (usually from Morotai airbase, in present-day North Maluku, Indonesia via The Philippines). In March 1945, Tom Harrisson parachuted into the Kelabit region with seven other Westerners, in order to assist the local people and work together to prevent Japanese conquest of the interior. Tragically, the plane that Harrisson travelled on never made it back to the Philippines and no trace was ever found. Harrisson didn’t find this out for several months.

A little later, in 1946, Harrisson along with a team of local Kelabit people finally made it to the top of the female peak where Harrisson left a wooden memorial to Flight 200. After the surrender of Japanese forces, Harrisson became Curator at Kuching’s Sarawak Museum. 40 years later in 1986, a British and Australian team led by Jonny Beardsall reached the top of the male peak. And in 1987, a second memorial made of bronze was erected next to Harrisson’s wooden memorial on the female peak. The male peak was climbed again in 2007 by Malaysians from a university in Cyberjaya on the outskirts of Kuala Lumpur.

To reach the base of the mountain from Bario takes a couple of days, so a proper trip to view the summit cliffs up-close requires a minimum of 4 or 5 days in total. Experts would need several more days for an actual rock climb up to the top of the male peak. The lower female peak is a scramble, especially near the very top where a rope ladder is usually required, but there is only very limited space for erecting tents. John Briggs, author of ‘Mountains of Malaysia’ (published in 1988) was of the opinion that the dawn view here is the second best in all of Malaysia (after Gunung Trusmadi).

The usual trailhead is in the village of Pa Ukat (1,075m). This leads northwards via many stream crossings and Shelter 3 (1,780m), Shelter 4 (1,640) which is near a logging road and finally Shelter 5 (1,485m) which is at the foot of the peak. The trek passes the Tamu Abu cliffs, Ulu Limbang and Pa Tabun. 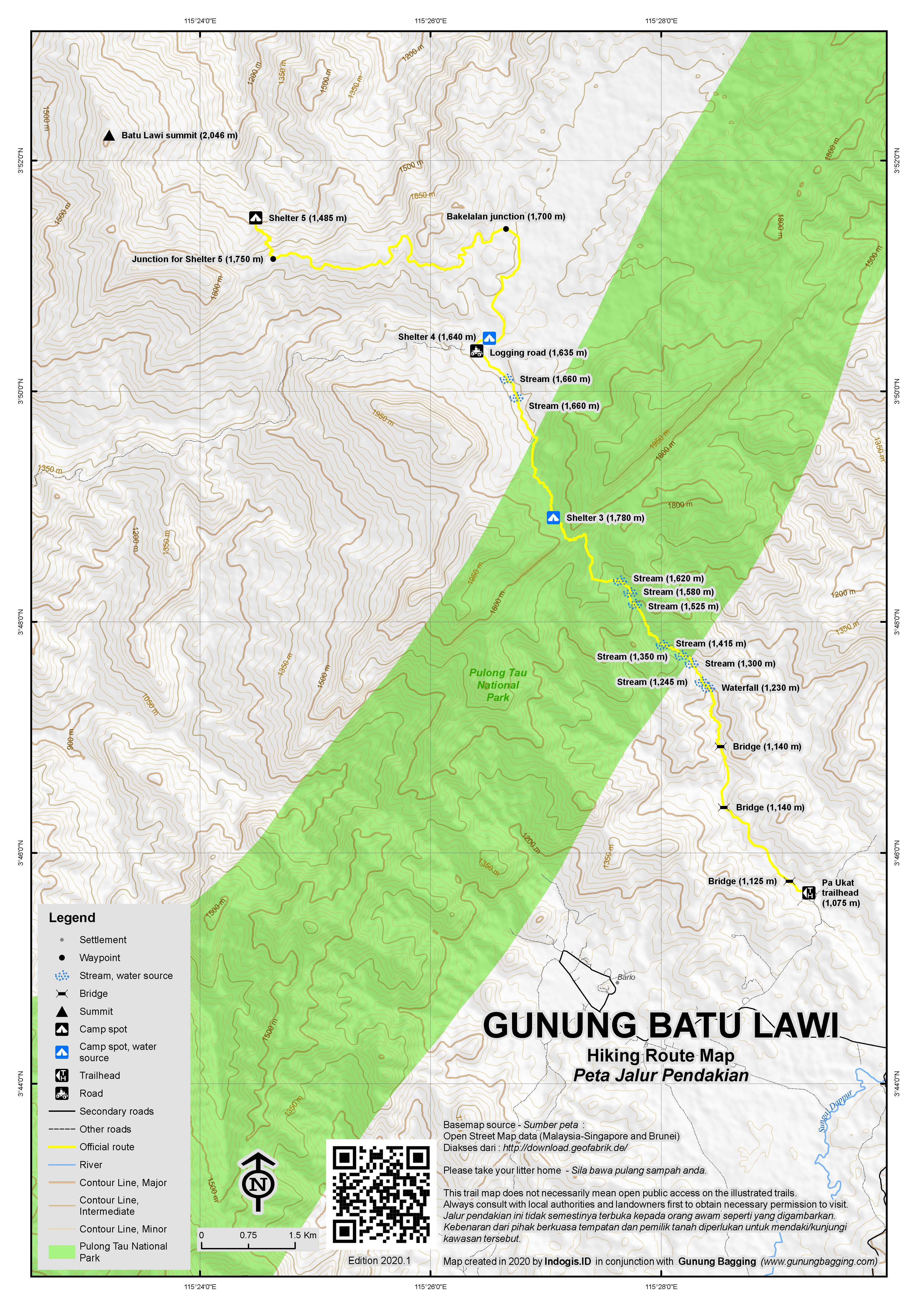 One thought on “Batu Lawi”