Rakata is the highest of the Krakatau islands in the Sunda Strait between Java and Sumatra. It is the remnants of the only one of three volcanoes (Perboewatan, Danan and Rakata) which formed Krakatau to not have been entirely destroyed in the 1883 eruptions. The island has a cliff as its northern face and prior to the Sunda Strait Tsunami of December 2018 was a popular place to stay in order to watch Anak Krakatau from a safe distance. It is thought to be volcanically extinct.

Although it’s the highest peak in the Krakatau islands group it is very, very rarely climbed and because of this the trail is overgrown. I would go as far as to say it’s one of the toughest day hikes in Indonesia. It’s not for beginners and there is barely a trail to speak of! Thankfully in clear weather there are spectacular views from the summit, perched on the 800 metre high cliffs which were created when the original Krakatau volcano erupted in 1883.

The starting point for the hike is actually on the side facing the coast of Java, so you can be at the trailhead in around 90 minutes in a speedboat from Carita. As of 2019, this is the best and safest beach to camp at as the north-facing one with a full view of Anak Krakatau was completely obliterated in the 2018 tsunami and no longer exists. Indeed, the north coast was nothing less than scoured by the impact and the 2019 appearance of the base of the cliffs of Rakata will be shocking to anyone with a good memory of what it looked like prior to the collapse of the Anak Krakatau cone.

In previous years, Rakata was climbed perhaps once or twice, mainly by researchers, but judging from the state of the trail (or lack thereof) in 2019, it hasn’t been climbed for several years and is therefore even tougher than it used to be. A trail needs to be made most of the way up and there is little evidence that anyone has been up here more than a handful of times or in the last three years or so. The vegetation is dense and navigation challenging. You may be incredibly lucky and do the hike just a few weeks after another group, but most probably you won’t be so fortunate.

The fact you start at sea level means it is incredibly hot and humid and a great deal of water is needed to prevent dehydration. Each hiker ought to take an absolute minimum of 3 litres. If you start later than at first light then consider taking even more as the temperature rises towards lunchtime.

The forest is great for birdlife, especially at dawn and dusk. In previous years there were many monitor lizards (‘biawak’) on Rakata and based on a 2019 visit to the island it appears that at least some of the population survived the force of the tsunami.

After an hour or so of not much elevation gain, the vague trail eventually starts to get steeper, though it also becomes vaguer and you will probably end up either following one of the ravines up the mountainside or clambering along a narrow, crumbly ridge above the ravines. Either way, you will need a local guide who has done this before and who is armed with a machete. The upside of how infrequently this peak is climbed is that there is almost no rubbish whatsoever.

There are lots of difficult sections where you will get very dirty and potentially cut to pieces. Long trousers, shirt sleeves and gloves are pretty much essential! As you continue up the mountain the vegetation becomes more and more dense due to how few people actually come here. If there were a decent trail, it would take 4 hours to reach the peak. In its present state it takes more than 5 gruelling hours!

Eventually you reach an area of mossy forest (744m), a sure sign that you are near to the top. Sure enough, next comes a ridge covered in lower vegetation rather than trees, and you begin to notice that you are next to a cliff edge – an 800 metre high cliff edge! Do take extra care here as a fall would definitely mean death.

From the top of the cliff, the views across the ocean and down to Anak Krakatau are stunning, though in some places the view is obscured by tree branches so you will have to search for the best spot for photos. Obviously you can also see the islands of Verlaten (Pulau Sertung) and Krakatau Kecil (Pulau Panjang) either side of Anak Krakatau.

There are also a few interesting rocky pinnacles halfway up the cliff-face. The actual highest point is unmarked and it’s amazing to think that so few people climb to this, the high point of the Krakatau islands. Hopefully given time this hike will become more popular, and therefore more easy to follow the trail. At present, a GPS is a very wise idea when trying to negotiate the forest here.

It takes about 3 hours to descend the same way, so altogether you really do need a full day for this – even with a group of strong and experienced hikers. Ask your guide to show you the place near the start of the hike where charcoal created by the 1883 eruption can still be dug out of the ground! There is also an impressive bat cave at an elevation of around 250m should you find yourself descending via the narrow ravine that brings you out on the beach by the Rakata lighthouse.

If you come out at the lighthouse, simply follow the beach (left) for less than 2 kilometres back to the sheltered camping bay. If you’re thinking of climbing Anak Krakatau aswell (and it is safe to do so) you can also consider camping on nearby Pulau Sertung. 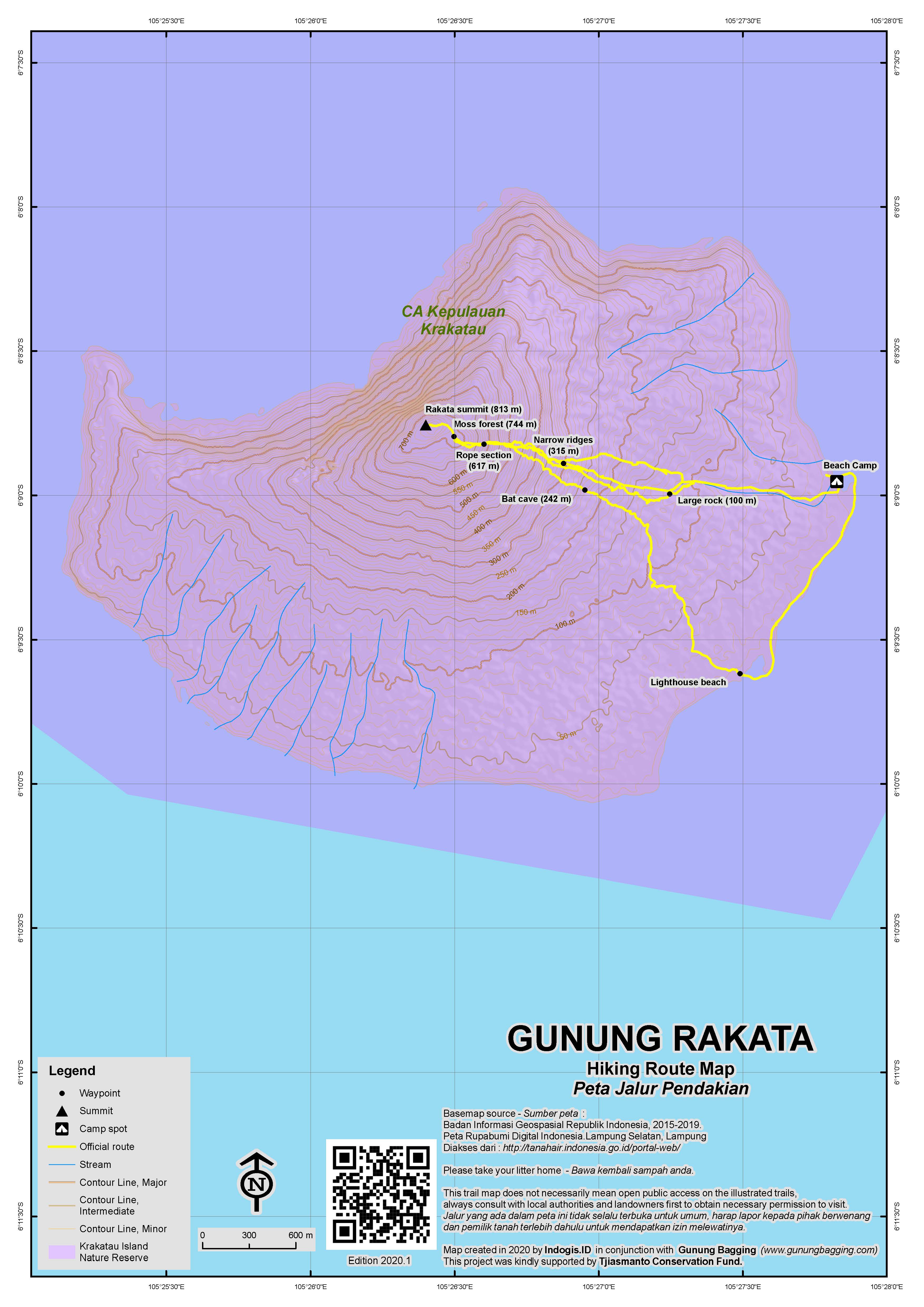 ‘Rakata’ means ‘crab’ in old Javanese. (Wikipedia, 2011). This is the most likely origin, followed by an onomatopoeic theory suggesting the name imitates the sound of the birds inhabiting the island, or possibly even the sound of volcanic eruptions. See Wikipedia or the Gunung Bagging Anak Krakatau page for alternative theories.

One thought on “Rakata”