Burangrang is the westernmost of the 2000-metre high peaks north of Bandung. Along with Tangkuban Parahu and Bukittunggul it is the remnants of the ancient Mount Sunda. Burangrang makes an excellent ridge walk and is a very popular mountain given its proximity to the city of Bandung. It is also rather challenging in places. There are two main routes up onto the ridge – from the east at the col known as Pintu Angin and from the south at the tiny village of Legok Haji. At over 1,500m above sea level, Pintu Angin separates Burangrang from neighbouring Tangkuban Parahu. There is a stony track leading from Parompong all the way up to the col and beyond to the beautiful lake of Situ Lembang. Unfortunately this area is used for military exercises and is often closed. Even hikers wishing to climb Burangrang are now asked to request ‘permission’ from Indonesia Special Forces in advance. Therefore it is much better to climb from the south at Legok Haji and either descend the same way or simply claim ignorance at the small building when you descend to Pintu Angin!

To get to Legok Haji (1,235m), it is best to take an ojek for the short 3 or 4 km trip from Cisarua. The trail starts at the end of the village track and leads up to the right past some graves and up along a delightful grassy ridge offering a fabulous panorama in all directions. The friendly villagers will point you in the direction if you are lost. After less than an hour you will enter the forest (at about 1,450m) and encounter a few steep, muddy sections of trail where the use of your hands is required. There are a couple of flattish areas suitable for camping (Pos 1 – 1,618m, and Pos 2 – 1,742m) but there isn’t much point considering this trail leads directly up to the highest point of the Burangrang ridge and you can be at the top in 2-3 hours total. Just before the summit is an area of recent landslide. Take care both here and on the summit ridge itself as the drops are often several hundred metres!

Finally you will reach the grassy top crowned with one of the largest summit pillars in Indonesia. The panorama is superb – Kawah Sunda Purba (the ancient Mount Sunda crater) to the north, the lake of Situ Lembang visible to the Northeast and the outskirts of the city of Bandung to the south. There is enough space for one tent next to the summit pillar but a better place is just three minutes walk east along the ridge just before a small memorial, presumably to a local climber. This second spot is large enough for 2 or 3 tents and offers even better views of Situ Lembang lake.

You can return to Legok Haji in two hours or if you’re feeling adventurous you can explore the eastern part of Burangrang ridge and descend to Pintu Angin. However do be aware that getting an ojek from Pintu Angin is pretty much impossible and you would have to walk for another hour to the ojek post at the end of the stony track in Parompong. After the small memorial stone the ridge descends steeply and suddenly and there is even a short section where you can use a thin rope to help you. The views here are fabulous – a sheer drop on the northern side offering excellent views of other minor peaks that are part of the same mountain range. Beyond the rope section the trail ascends to Burangrang’s eastern top (approx. 2,033m), although the main trail actually circumnavigates it.

After the eastern top, the trail is steep and muddy as you head down via numerous minor tops to eventually find yourself in pine woodland (1,606m) at the base of the mountain. From here head out to the stony track at Pintu Angin (1,533m) and walk down towards Parompong where you will be able to find an ojek back into Bandung. 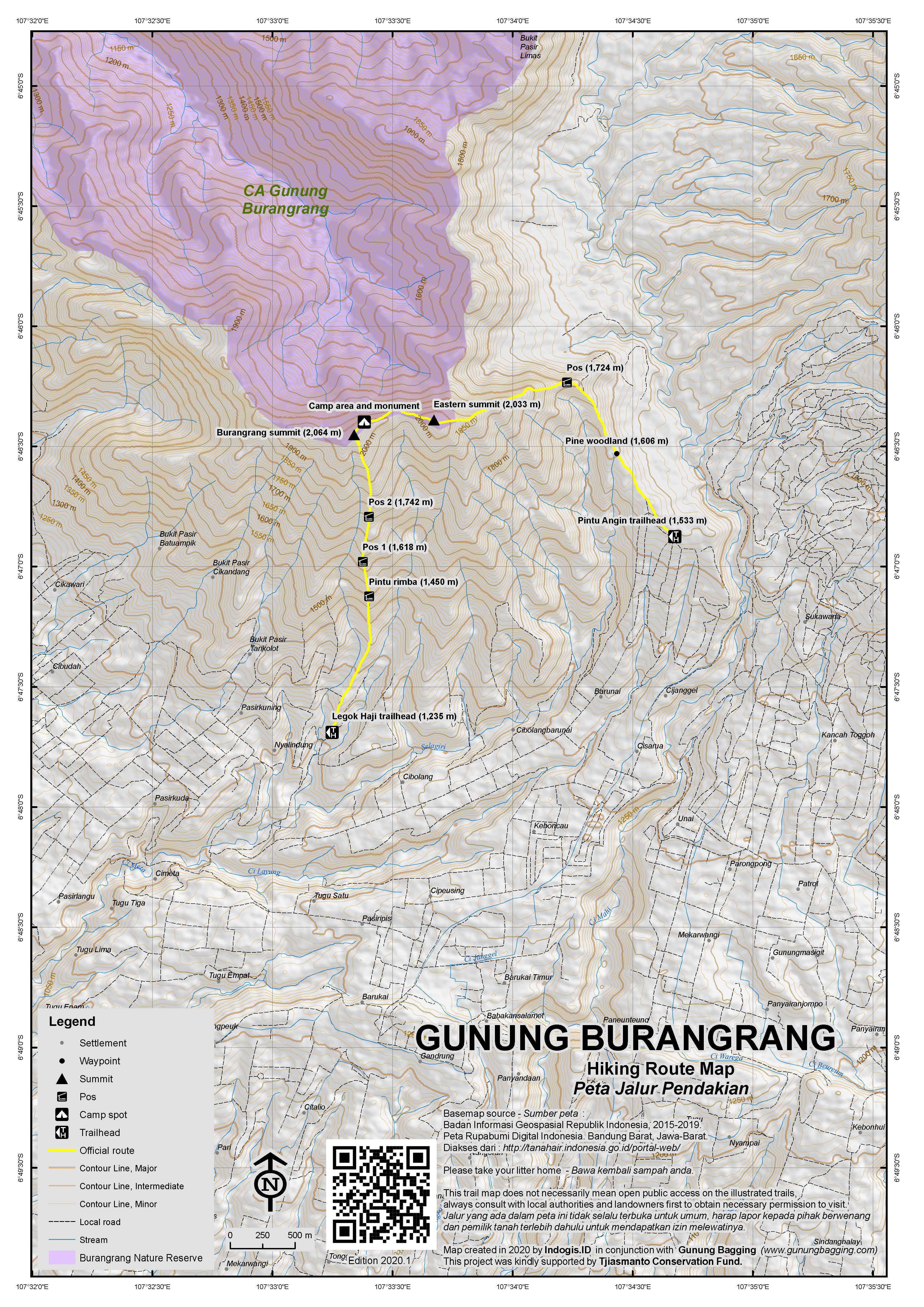