Gunung Patuha is just over 40km from Bandung city, near Sugih village in the district of Pasir Jambu. It is the highest peak in the large highland area between the Gede-Pangrango massif and the mountains of Garut. The word ‘patuha’ apparently comes from the words “Pak Tua” (old man). It’s actually a twin volcano – with two summit craters of very different character. The forest-covered north crater is the highest of the two and has been dormant for many centuries. The south crater, known as Kawah Putih (white crater), is a leading local tourist attraction. It is very popular with visitors at weekends and was first written about by Dr. Franz Wihelm Junghuhn (1809-1864), a Dutch botanist from Germany. He found that the high density of sulphur was making birds reluctant to fly over the crater. Locals still regard the area as haunted and the atmosphere is definitely one of eerie calm. During the 20th century, the Dutch built a sulfur mine which was later controlled by the Japanese military. Sulphur mine tunnels and the remanants of old buildings still exist to this day. There are also several ancient graves in the area. The car park is at an elevation of 2,200m so it’s a very easy climb to the top – there and back in less than two hours!

From Bandung, there are plenty of angkots serving the main road south-west to Soreang and Ciwidey and it is an easy day-trip from Bandung. However, you will have to change vehicle at least once so it is much better to avoid the waiting around and hire a taxi/private car. It takes approximately 90 minutes from the centre of Bandung to the top of the road at Kawah Putih. Beyond Ciwidey, the road is lined with strawberry fields, plants for sale and related produce. From this point, Kawah Putih is well signposted and it is very hard to miss the entrance gates. Since 1987 Kawah Putih has been an official tourist site and has an information centre and cafe. Entrance tickets are a very reasonable Rp. 12,000 and it is open from 7am until 5pm. Beyond the entrance gates, the road climbs up over 5km through delightful eucalyptus plantation to the crater car park. There are several places worth stopping at briefly to admire the view of other forested peaks in the distance.

When you reach the top of the road, there is a large area for vehicles and small warungs (shops), and some excellent places for having a picnic. Kawah Putih itself is very impressive – a misty turquoise crater lake surrounded by white rocks and sand. There is a smell of sulphur but it is not overpowering. To reach the summit of Gunung Patuha, leave the car park at the stone tree trunk and continue up through the forest on a well-defined path to the right of Kawah Putih. The trail is very clear although not many Kawah Putih visitors hike this way. After less than 30 minutes of ascent through the forest the edge of the old forested crater (‘kawah saat’) is reached. There is a flat area occasionally used for camping. From this point you can look down over the edge to the swampy, dormant northern crater floor (which has an elevation of 2,284m according to the Bakosurtanal map). Apparently there were eruptions here several hundred years ago. From the camping spot, follow the less well-defined path leading left (west) through the forest along the edge of the crater. The trail ascends and descends and ascends again before you reach another flat, open area suitable for camping. This is the true summit (although Bakosurtanal suggests 2,440m for the northern rim so we will be investigating later in 2020) and there is a small collection of rocks which could well be a grave of some sort. Sadly, views are very limited due to the density of the forest. According to local people, this summit area was used in the past as a meeting place of the ancestors of South Bandung and it is certainly a great place for quiet contemplation.

It is less than an hour back down the same way to the car park.

With the growing popularity (over-popularity on weekends) of Kawah Putih, hikers ought to know it is possible to hike Gunung Patuha from a small village called Cipanganten to the south-west of the mountain, avoiding the crowds and excessive charges of Kawah Putih. This leads up via a tea plantation which surrounds the second highest peak in the range, an un-named peak 2,399 metres high according to the Bakosurtanal map, around 2 kilometres south of Gunung Patuha.

To the east of Gunung Patuha is a vast area of rarely-explored forested ridges, including Gunung Urug (2,205m), Gunung Puncaklawang (2,187m), Gunung Dewata (1,840m), Gunung Waringin (2,035m), Gunung Karangtengah (2,157m) and countless more un-named peaks. This stretches all the way to Gunung Tilu near Pangalengan and is in complete contrast to the overly-popular Kawah Putih.

To the north-west of Kawah Putih, on the other side of Ranca Upas and the main road, are several other peaks rarely-hiked including Gunung Masigit (2,094m), Gunung Tambakruyung (1,994m), Gunung Tikukur (1,960m) and Gunung Cadaspanjang (2,066m). 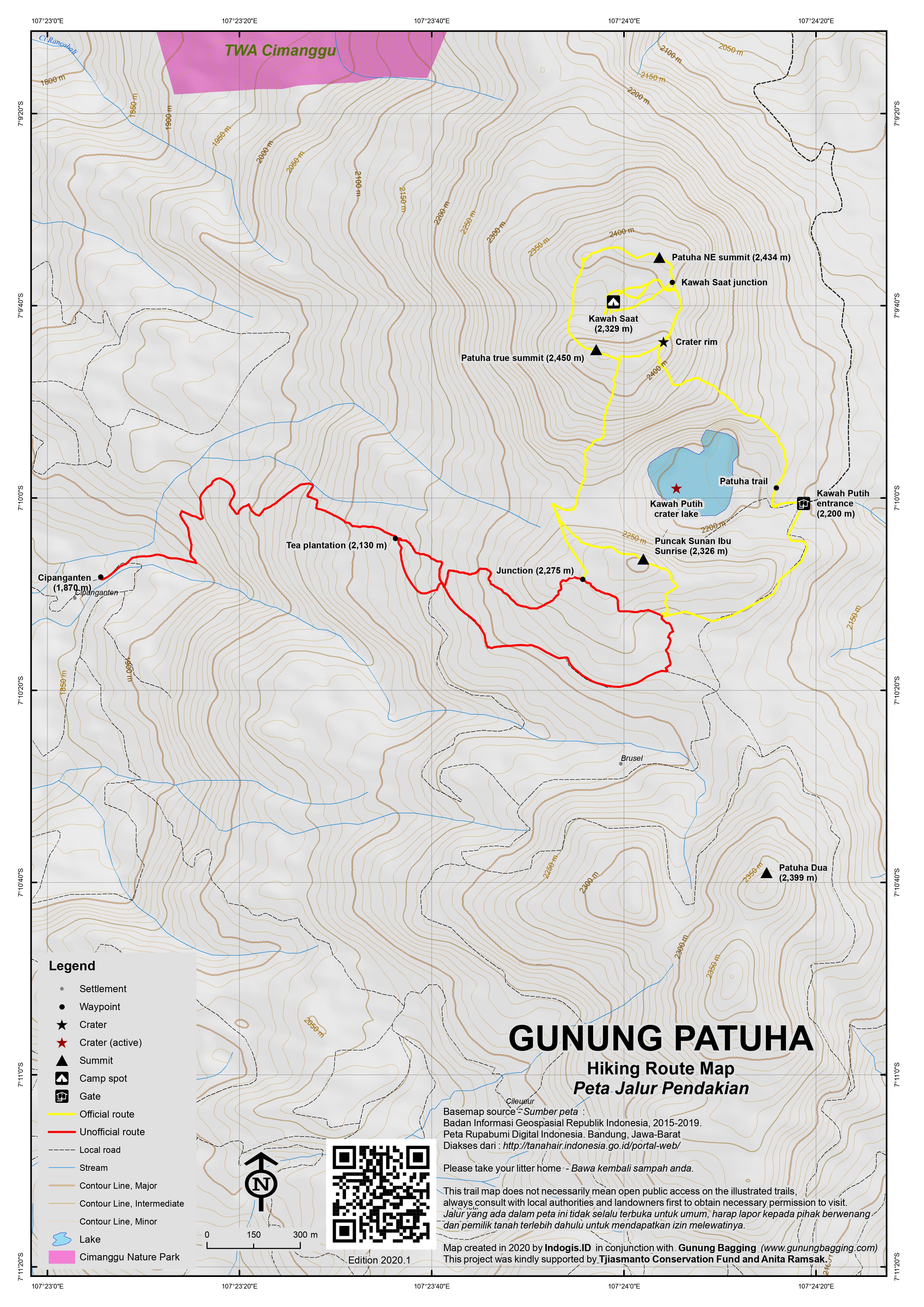 Allegedly from ‘Pak Tua’ meaning ‘old man’ in Indonesian, referring to the fact that local legends tell of village elders meeting at the summit in centuries gone by. Also known to some local people as ‘Gunung Sepuh’ – ‘mountain of elders’.