Olet Takan is the most prominent peak in the hilly interior of the island of Sumbawa south of the town of Sumbawa Besar. It is not yet popular with hikers and finding anyone who has been to the top remains difficult. However, the area around Ropang is incredibly scenic and it makes a great day out from Sumbawa Besar.

Olet (or ‘Olat’) is the local name for hill or mountain in Western Sumbawa. Further east in the Bima and Komodo areas the local word for hill is ‘Doro’. However, locals also refer to ‘Olet Takan’ simply as ‘Gunung Takan’. There are very few tourists in this part of Sumbawa, and the only foreigners most local people encounter are either surfers or mine workers. Indeed, expect local people to assume you are looking for gold on a mining survey if you ask for them to accompany you into an almost-unknown forest area such as this!

The simple, quiet road from Sumbawa Besar and the northern coast up to the pleasant highland valley of Ropang actually skirts round Olet Takan and reaches almost as high as 1,000m above sea level at one point. This road is, as you might expect, bumpy and pot-holed in places and absolutely fine in other places. The scenery is absolutely gorgeous and beyond the colourfully-painted town of Lantung the hill itself is quite clearly visible as a forested top surrounded by often-parched grassy or bare lands not dis-similar to the evocative landscapes of neighbouring Sumba island.

Indeed, there is even a photo spot at around 900 metres above sea level, known locally as ‘Lenang India’ where you may see folk taking pictures next to a couple of simple shelters. The road gets to within 2 kilometres of the top of Olet Takan on the northern side, but this area is sparsely populated, so finding anyone who might know a way to the top from here is challenging. It is probably possible via coffee plantations but you would almost certainly need to arrange things in advance for a good chance of success.

After skirting round Olet Takan, the road descends into the pleasant, friendly village of Ropang (730m above sea level). This flat valley has cool temperatures by Sumbawa standards and is incredibly scenic, with cattle roaming the flat valley floor, surrounded by forested peaks and covered in rice fields. During the dry season this land is utterly parched with rock-hard, brittle soil, but during the wetter months you can expect to encounter leeches in the forests here.

Sadly, on the western side of the road there is a fair bit of logging going on. The likelihood of hearing a chainsaw or two is high, but it appears not be at industrial levels of destruction just yet. Perhaps the only chance of preserving the forests that remain is by developing eco-tourism initiatives here and certainly Ropang has a lot going for it and may grow in popularity once people know about it.

The best starting point for a hike into the forests of Olet Takan from this southern side of the mountain is from the village of Desa Ranan (733m). This is about 15 minutes beyond Ropang by motorbike (remember to turn left and head east via Desa Lebangkar at the obvious road junction – 782m). Whereas if there were a starting point for the hike on the northern side you would be less than 2 kilometres in a straight line from the peak, here you are a good 5 kilometres or so.

Thankfully, the trek from Desa Ranan to the forest entrance is delightful. About 2.5 kilometres is covered by heading northwards criss-crossing farm fields. Scrubby undergrowth is reached after about one hour (800m above sea level) which may need clearing before you soon enter forest and start properly ascending. There are several hunters’ paths here but none are very frequently used. At the end of the dry season (September-October), the forest vegetation feels fairly spread out and not the usual densely-packed foliage that slows progress down to almost a standstill in wetter areas of the archipelago. So, even though this area is not well-frequented, there remains a clear but vague path up the ridge in most places. In one or two areas you will see evidence of local wood cutting, hopefully for the construction of local houses rather than for selling on in other areas.

Unfortunately, it is not known if a trail leads all the way to the true peak. According to local people in Desa Ranan, the path up the side of the mountain does not go to the summit but simply reaches a lower part of the summit ridge (possibly the 1160m spot height on the Bakosurtanal map 1 kilometres east of the true summit) before heading down to the north to an unclear point on the main road towards Lantung.

In short, the forest trail is occasionally used by locals searching for wood or hunting, or for cutting across the mountain range and emerging on the northern side on the road to Lantung. This seems to be the case for the hills south of the Ropang area too, with a guide saying that Gunung Dinding to the south could be crossed on foot and if you kept on going you would reach the totally undeveloped southern coast in this part of Sumbawa after 15 kilometres or so.

On our trek, we got to within about 1.1km of the true summit, to the east of the peak not far from the col, at which point the local guides said this was as far as they had been before and is what they know as the puncak (peak). Further to the east is another lesser peak which Bakosurtanal suggests is 1,228m high. Given our lack of time we had to return to Desa Ranan, but surely another hour or two and we might have made it to the top of the true peak. One local mentioned there being a cement object (‘semen’) on the true peak, so there is a good chance that there is a triangulation pillar up there from many decades ago – very likely, since neighbouring Olet Sangenges in Western Sumbawa also has one.

According to the Bakosurtanal map, Olet Takan has two peaks about 500 metres from each other, with the western one being 1,328m and the eastern one being 1,336m. Bakosurtanal is not unknown to underestimate heights so even if the mountain is not quite a Ribu, it is certainly close to being a Ribu. More investigation is required and a successful trek would surely only require one full day. 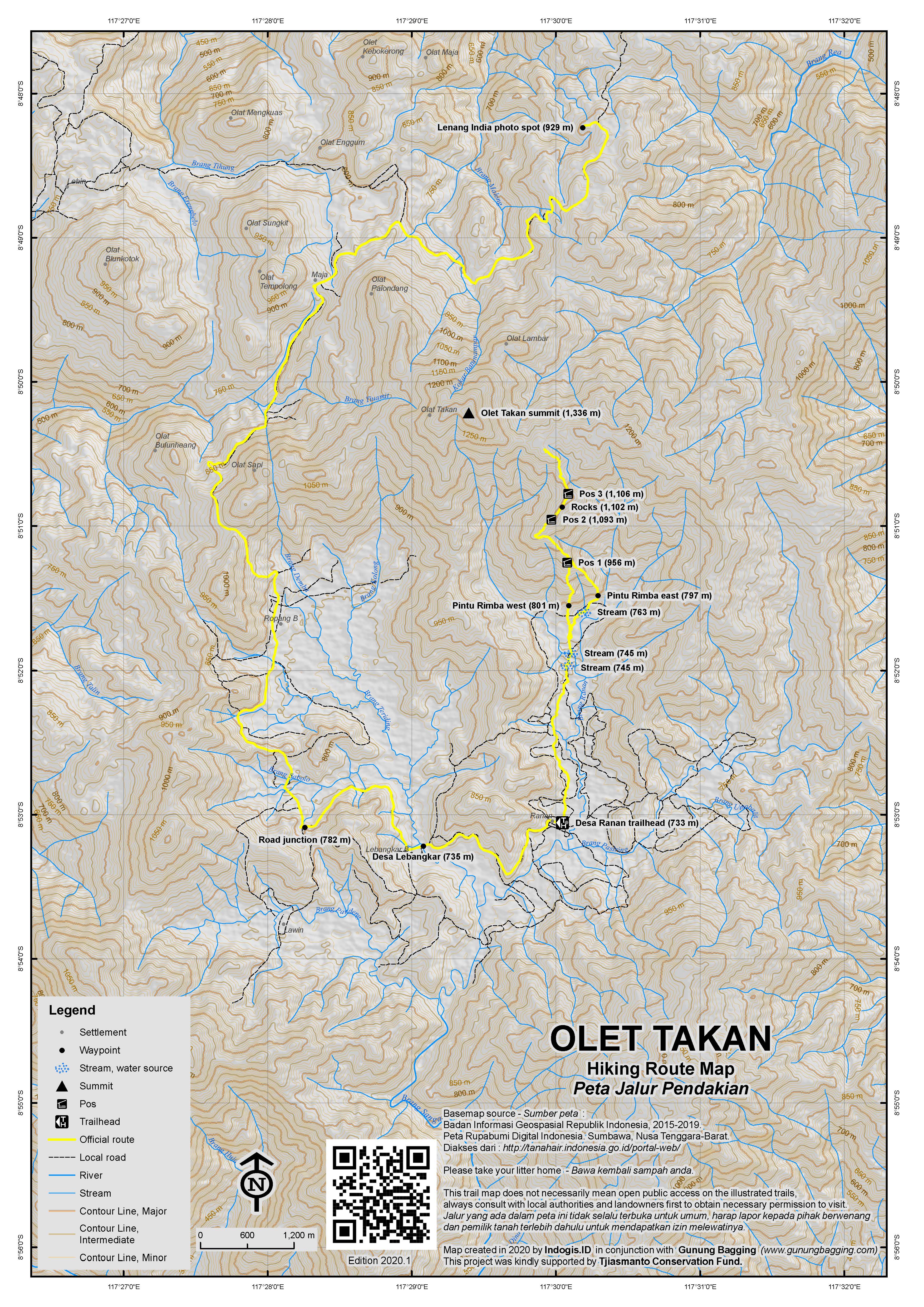 One thought on “Olet Takan”