This peak is the highest in a vast forested range in Western Sumbawa and is sometimes climbed by local hikers but remains relatively unknown. It is also known by local people as Puncak Ngenges or Puncak Ngengas and the Bakosurtanal map calls the mountain range Pegunungan Puncak Ngengas, but the highest peak is not labelled and the name ‘Olet Sangenges’ comes from ‘Olat Sangengas’ which on the map is a lower peak at 1,683m around 3 kilometres away to the east. There are two main routes to the top, one of which is much easier than the other.

Olet Sangenges can be hiked in one long day if you start before first light from the remote mountain village of Desa Tepal (889m) which lies to the south-east of the summit and indeed is the closest village to the peak. The main problem is getting to Desa Tepal on what is a very rough and muddy track for the final 20 kilometres beyond Punik. The few who travel on this remote road use either jeeps or trail bikes. Technically it can be done on normal bikes but this requires superhuman powers of patience, time and the willingness to get off and walk up a steep section of mud that is simply impassable. Attempting this during the rainy season would be a very bad idea indeed. You are highly likely to need a night in the village before starting your hike at 3 or 4 am the next morning.

Essentially it’s about 55 kilometres from Sumbawa Besar to Desa Tepal, of which 33 kilometres are fine and 22 kilometres are very challenging. In all, it can take anything from 3 to 5 hours one-way. Beyond Punik, where the road disintegrates into thick, steep mud and rocks, the scenery is very pleasant. To the south of the highest part of the track are the Batulanteh mountains, the highest of which is Olat Batupisak (1,763m) according to the Bakosurtanal map.

Once in Tepal, and with a local guide you can actually take bikes, at least trailbikes, several kilometres further up into the extensive coffee plantations to an elevation of around 1,150 metres. This takes around 20 minutes and saves around one hour.

Once hiking, the trail crosses over a wooden fence (1,218m) before reaching a simple wooden hut on the left (1,220m). This has been labelled ‘Basecamp Rindu Tanjakan’ by a previous group of hikers! Just beyond this point is a very important left turn, with no sign, off the main path. If you continue you will end up deeper into plantations towards the fascinating Batu Tulis, which is well-worth visiting on your descent. But a left leads you into the forest (1,330m). The next important point is also currently without a sign. At 1,411m a very vague path leads down to the left to perhaps the final reliable water source near the trail, though it takes a good few minutes and local knowledge to find it.

The trail here remains quite easy-going and gradual in terms of ascent and only gets steeper after the 1,500m mark. The forest is very pleasant, and eventually you will reach a rocky area (1,665m) where care should be taken on what can be slippery rocks in wet conditions. Continuing on along this ridge, the next landmark is the impressive Batu Bersusun (1,737m on GPS, 1,724m spot height on the Bakosurtanal map). This large boulder, also known as Batu Batunin, appears to block the ridge but can actually be crawled round safely on the left side.

Batu Bersusun is a traditional place of ritual prayer for local people and is also the finest viewpoint over the whole range. The true summit is still a reasonable distance away, seen ahead on the left, a forested peak. After enjoying the views from the boulder, you need to descend to the col first before skirting round to the left of the peak directly ahead. The col is rather overgrown with vegetation, apparently after a recent forest fire, but is soon passed. The next landmark is a minor trail junction which would be easily missed. On the right is a small path, apparently part of a Japanese colonial project here many decades ago, and known as Jalan Jepang (1,710m). This mysterious path apparently criss-crosses the higher slopes of the range, but you may struggle to spot it without your local guide pointing it out to you.

It may just be coincidence that Olet Sangenges has the famous Japanese honorific word – ‘san’ – in its name, as is found for most if not all of Japan’s mountains such as Fuji-san, added to the mountain name to show respect. Or it may have emerged during the Japanese colonial era here, and later reverted back to simply Ngengas rather than Ngenga-san or San-ngengas.

After skirting round the side of a lesser peak (1,779 metres high according to Bakosurtanal), a forest col is reached (1,650m). A minor ridge is then reached on the left, at a point that looks like an old camp spot (1,674m). As the summit is 1,871m it means you now have an ascent of just under 200 metres through occasionally very steep mossy forest.

Finally the summit of Olet Sangenges and all of Western Sumbawa is reached. There is no view possible here due to the forest but there is an impressive, large trig pillar at the top. The identification number stone has long since been gouged out. The fastest you are likely to be at the top from Desa Tepal is around 6 hours but it largely depends on how high up into the plantations you leave your motorbikes. A descent is obviously a fair bit faster, but if you want to visit Batu Tulis then allow extra time.

The main Batu Tulis (1,296m) is one large flat-topped rock with flat-top dimensions of about 1.5 metres by 1.5 metres. It is in a cluster of rocks on the edge of the coffee plantations, but at least one other rock has ancient carved pictures on it. Apparently these have yet to be dated but are presumed to be very old indeed and are thought to come from the era when Islam first arrived in Sumbawa. Objects depicted include weapons such as spears, machetes and arrows, a vase or cup of some sort, and at least one human face. Thankfully there is a clear stream not far from the rocks, which is great news for those who have already run low on drinking water! Your guide will then lead you back to the main path near where the obscure left turn was made on the ascent just beyond the wooden ‘basecamp’ hut.

Brave souls may attempt to get back to Sumbawa Besar the same day in the dark, but unless the conditions are perfect or the road is radically improved then this will be an utterly exhausting exeprience! You can stay in the friendly village for another night – indeed, there are some vague plans for an official losmen of some sort in the near future.

Marente is a popular tourist village to the north-west of the range, much more easily accessed than Desa Tepal at present. Local guides regularly lead groups to waterfalls on the lower slopes of the range. However, the village is close to sea level and there are several peaks and narrow, steep ridges between it and the summit. Thus no surprise that a return hike to the summit from Marente takes at least three days (two nights camping in the forest) and is a much longer hiker than the route from Desa Tepal. The ultimate trek is obviously a traverse from one village to the other but you would need highly experienced guides to do this safely. On the Bakosurtanal map, the highest ridges further west of the true summit looks very steep in places, such as Olat Pamantuasu (1,770m), so it may be the case that the Marente route avoids these spots that look like they could be considerably challenging terrain.

It is also apparently possible to hike Olet Sangenges from the north starting in Desa Sabedo and from the south starting in Bao Desa but both of these routes are undocumented and may be difficult. 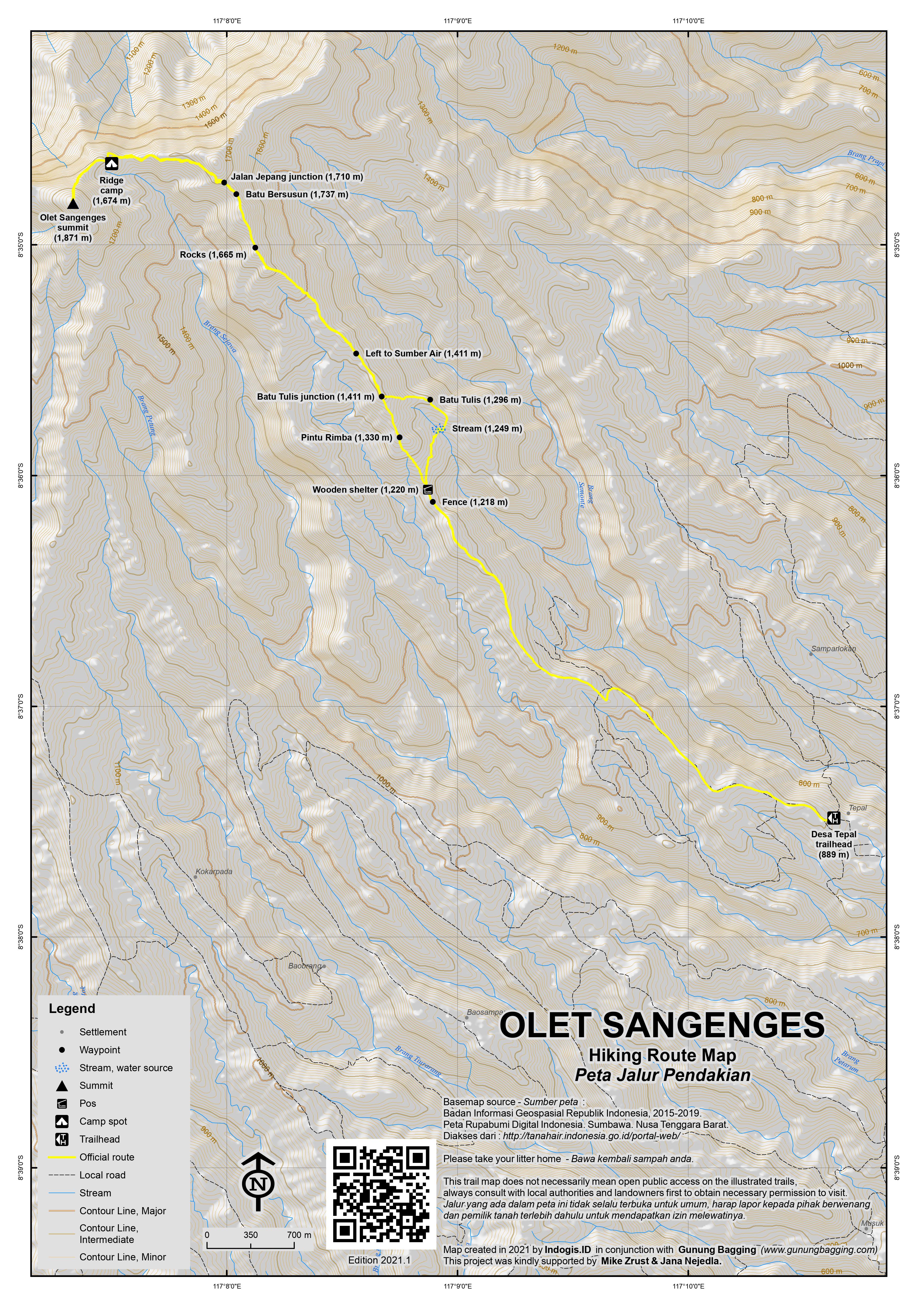