Manglayang mountain is perfect for a weekend day hike as you can climb it without camping overnight. It takes about 2 hours to ascend to the lesser eastern peak which offers wonderful views over the plains of Bandung and just under an hour more to the large, flat summit. The trail is quite slippery and steep at the beginning but the forest is very pleasant as you will always walk under the shadow of the trees.

Looking at the mountain on Google Earth it is clear that this used to be a powerful volcano with a wide, circular crater wall. Indeed, remnants of lava flow can still be seen on the Baru Beureum route. From the end of the Bandung toll road at Cileunyi, follow signs for Sumedang or Cirebon and take a left turn up the hillside at UNPAD University in Jatinangor. Follow the road for perhaps five minutes. You need to take a right turn just before the Kiarapayung West Java Scout Area, and a second right before a sharp left turn under a green entrance. From here it is a bumpy kilometre or so of farm track. The Baru Beureum trailhead starts near some buildings and a warung located 1,160 metres above sea level and there is enough space for 2 or 3 cars to park. Just behind the warung is a large grassy camping areas popular with local students at weekends.

Follow the trail behind the warung, cross the little stream and head straight up the steep, slippery trail through scattered pine woodland. After rain the trail is particularly difficult so it may be a good idea to take a walking stick and perhaps even some gloves just incase. Thankfully there is very little litter to be seen on the trail which is a great sign. At about 1,395 metres above sea level the trail turns to rock which would appear to be the remnants of an ancient lava flow from the time when Manglayang was a powerful, erupting volcano. At around this point, listen out for monkeys in the forest to the right of the trail.

Looking back down the trail you will see an impressive panorama of farmland and mountains, notably the Kareumbi range (Gunung Kerenceng) and the small Gunung Geulis to the right. At an elevation of approximately 1,548m is the first obvious place on the trail used by campers but if you are spending the night on the mountain it is best to press on to the eastern summit. Soon you will see the highest peak of Manglayang to the right of the trail before reaching a junction at 1,600m just below the eastern summit. A right turn here is a short cut up to the true summit but if you miss the eastern top you basically miss the finest views anywhere to be found on Manglayang.

From this junction it is less than ten minutes to the eastern top (1,650m) where you may well meet some local campers admiring the fine views over the eastern end of the Bandung plains and neighbouring mountains. The view of Bandung city is also excellent and you may see one or two aeroplanes taking off and landing. At the southern end of the ridge the trail leads back down to the Jantinangor via a longer, lesser-used trail. After enjoying the views, follow the ridge northwest towards the forested summit of Manglayang (1,835m).

It is just over 30 minutes to get to the large, flat top which offers no views yet is a pleasant place to sit and rest. There is also a supposedly ancient grave at the top along with several summit signs on trees made by local hiking clubs. You may even find campers up here but the majority prefer to stay near the views at the eastern top. The Bakosurtanal map lists this top as being 1,817 metres high, with a higher top being 250 metres further north (1,824m). However based on GPS data, this is indeed the summit at around 1,835 metres.

From the summit, a trail leads down to the left in the direction of Batukuda (‘stone horse’) trailhead and camp area (1,150m) and if you prefer to make a traverse then you can continue this way (estimated time 3 hours to civilisation on the other side of the mountain) but the majority will wish to return the same way to their vehicle by the warung which takes just over 2 hours. Take extra care on the steep descent as it is very easy to fall over, especially during the rainy season. You can wash your hands in the small stream before enjoying some gorengan (fried food) at the friendly warung. We suggest you pay a little extra at the warung to says thanks for leaving any vehicles nearby.

A third route from further west starts at Curug Cilengkrang waterfall (1,060m). This leads up via a different, western ridge and does not meet the other two trails until the summit.

Nominated as a Spesial by Gita Saraswati. 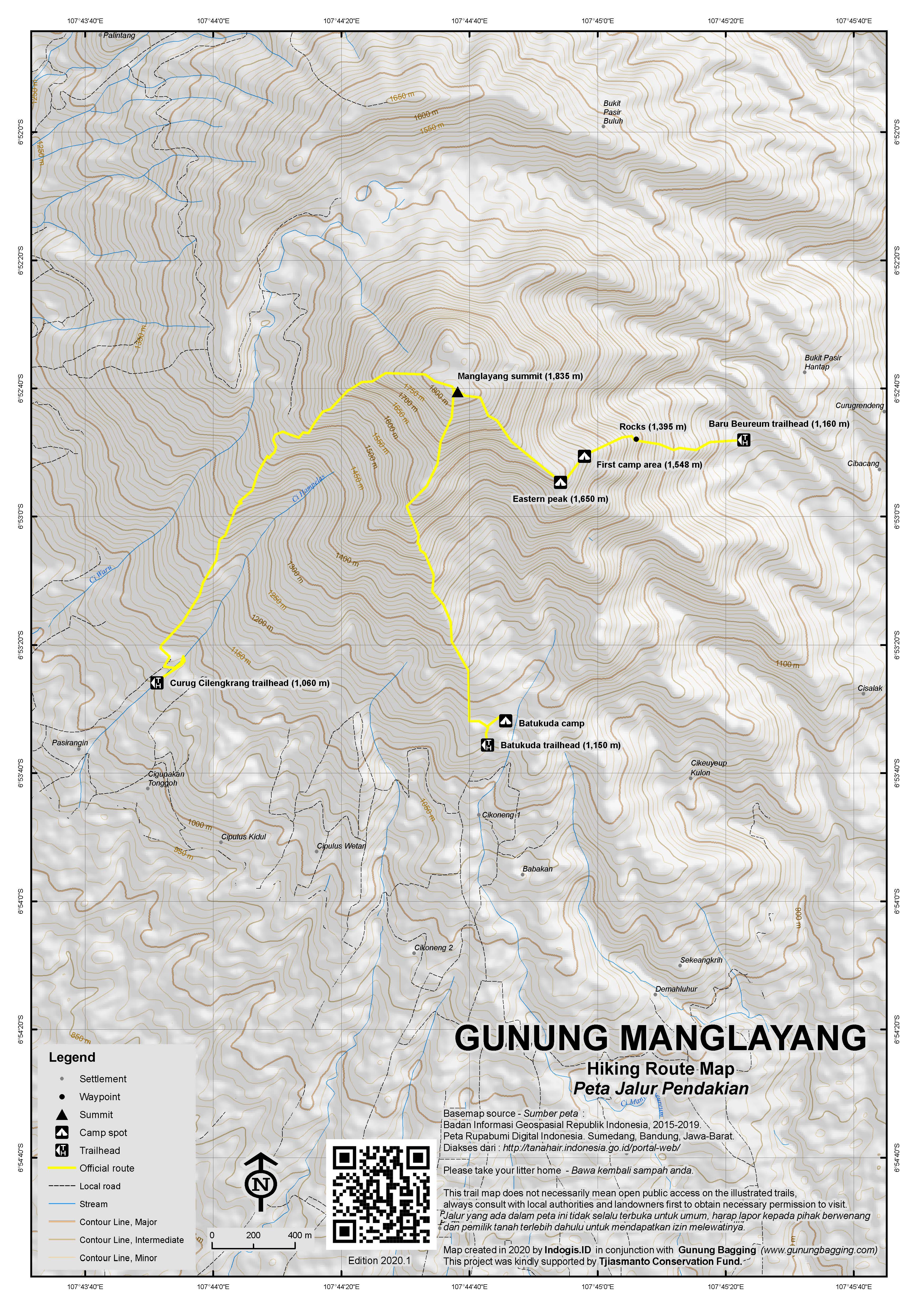