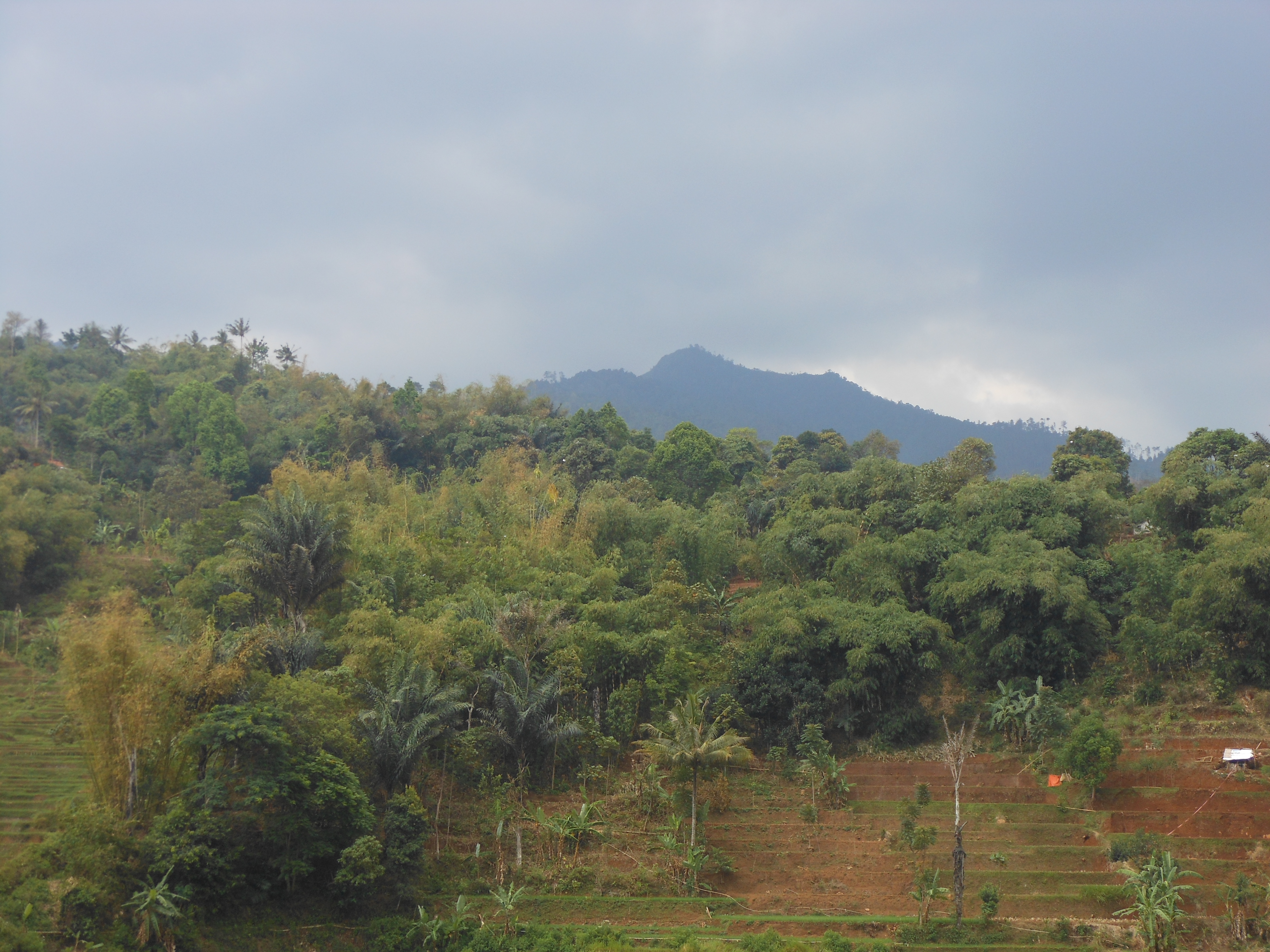 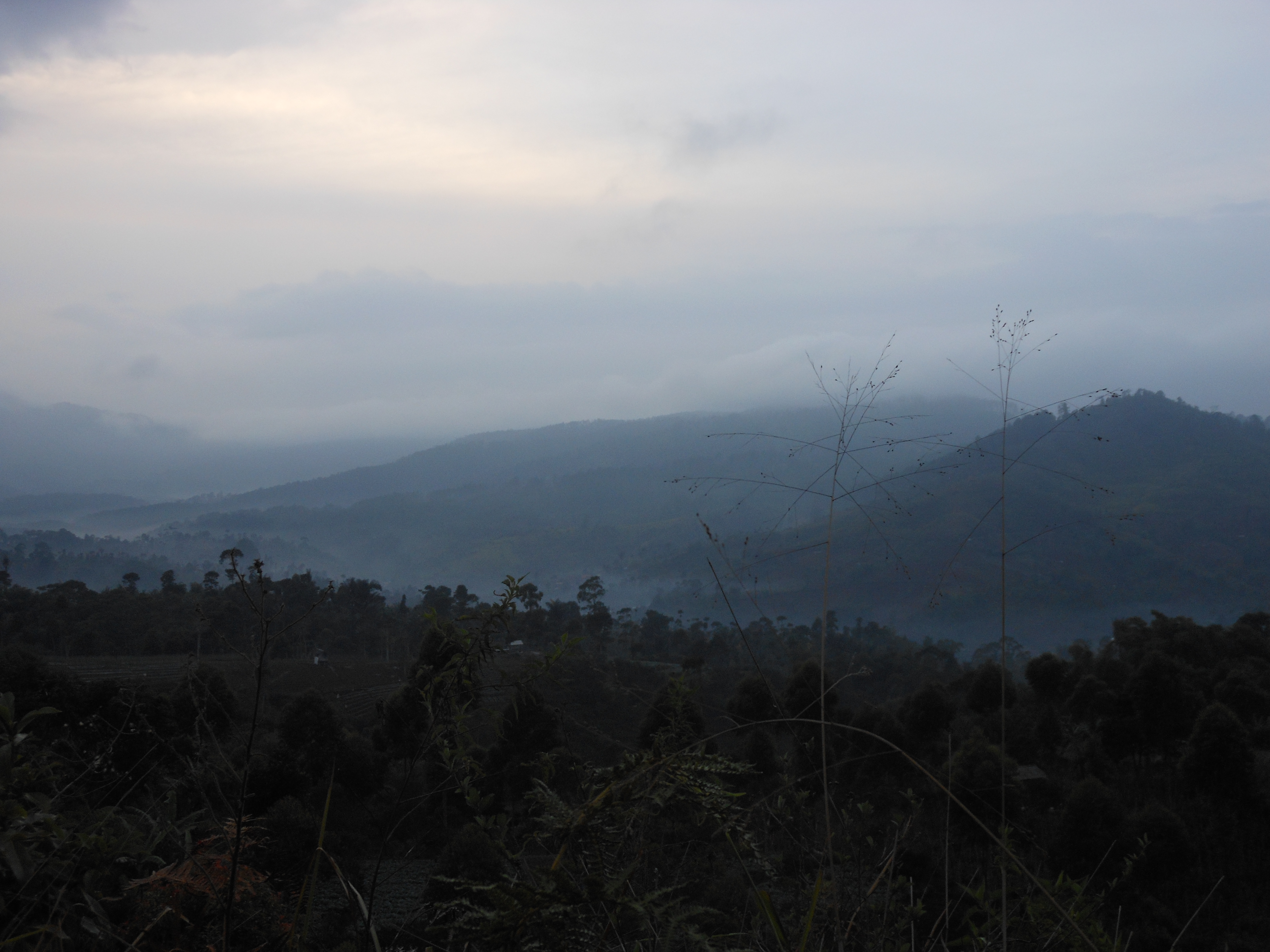 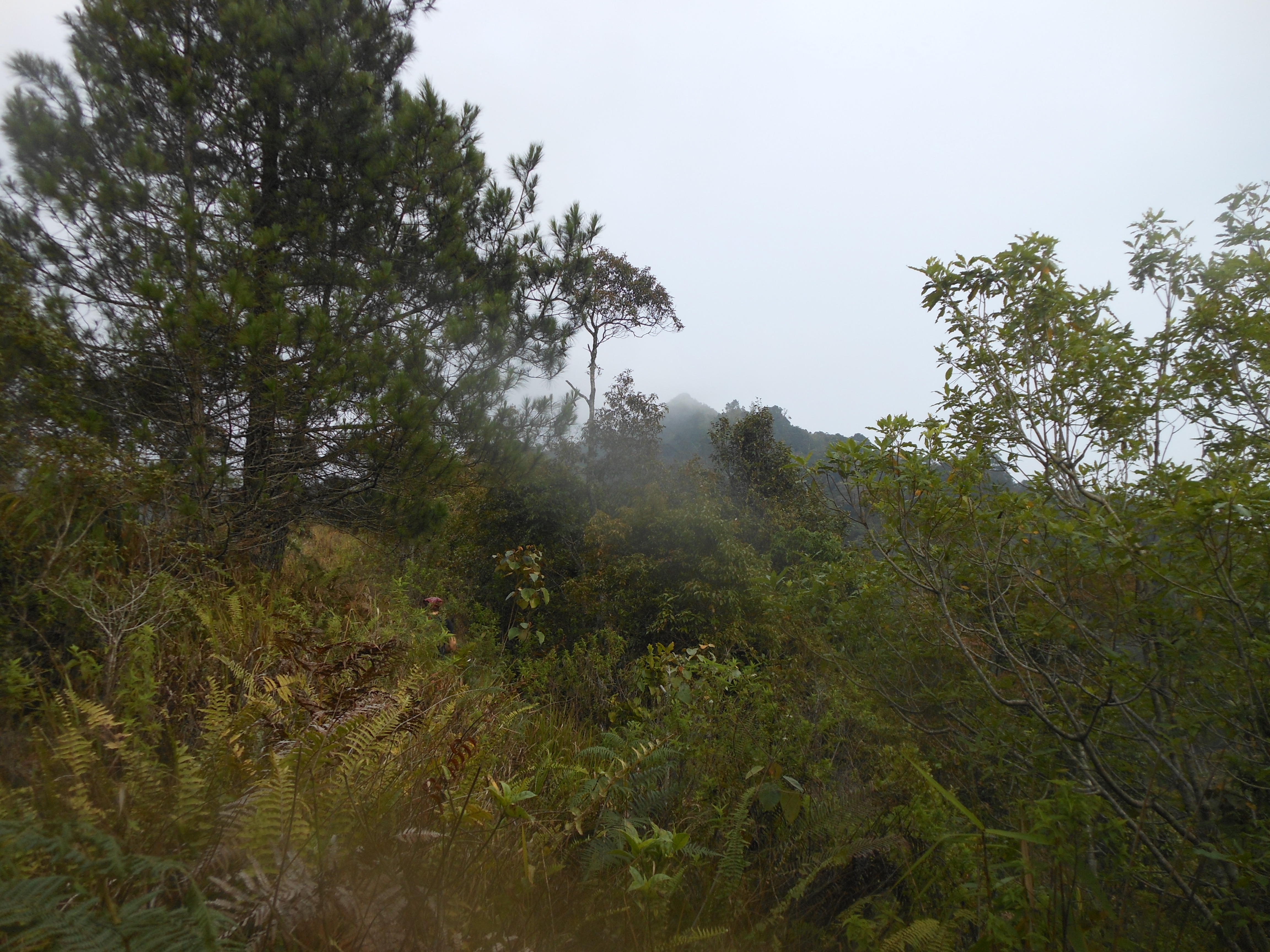 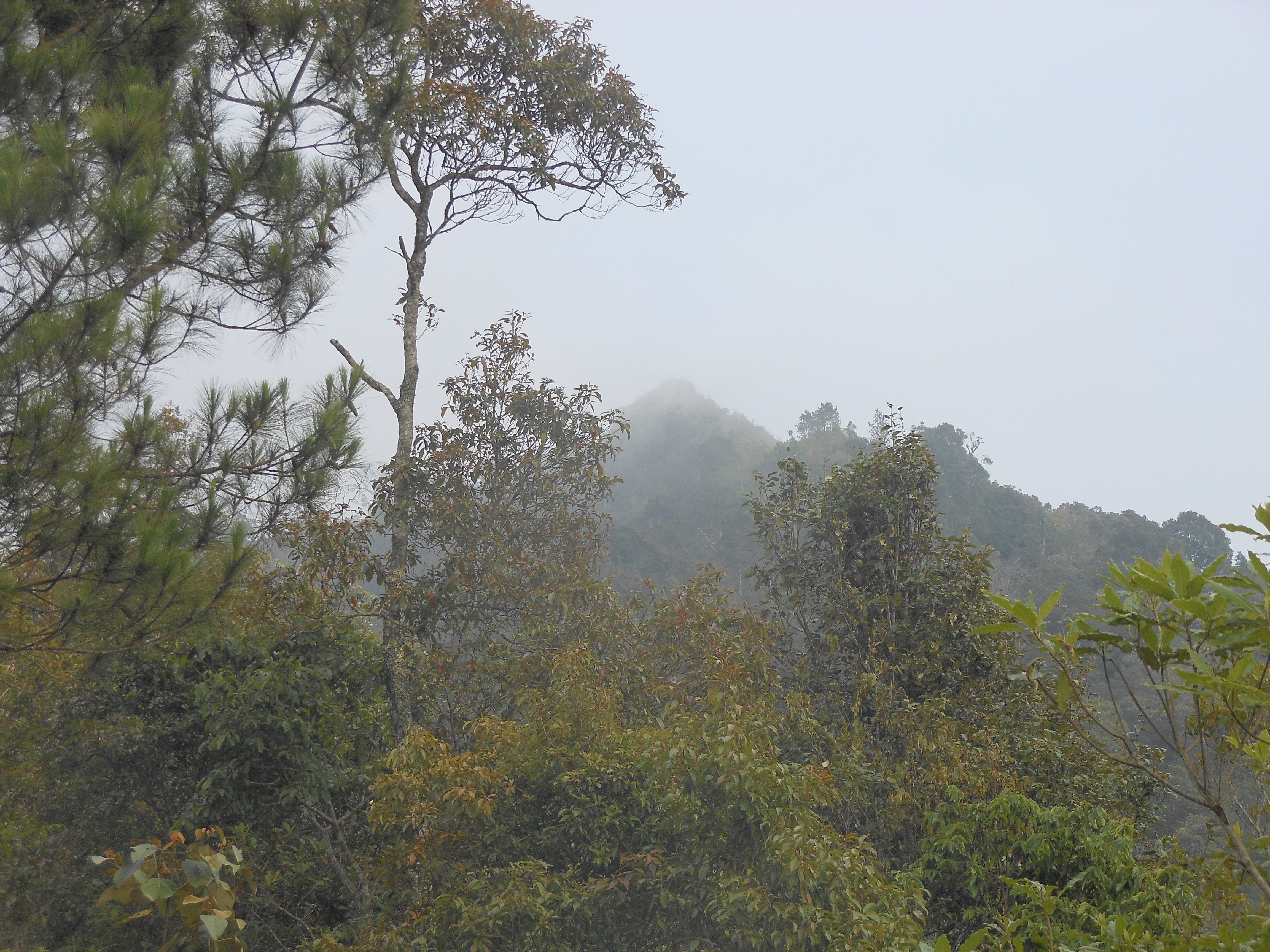 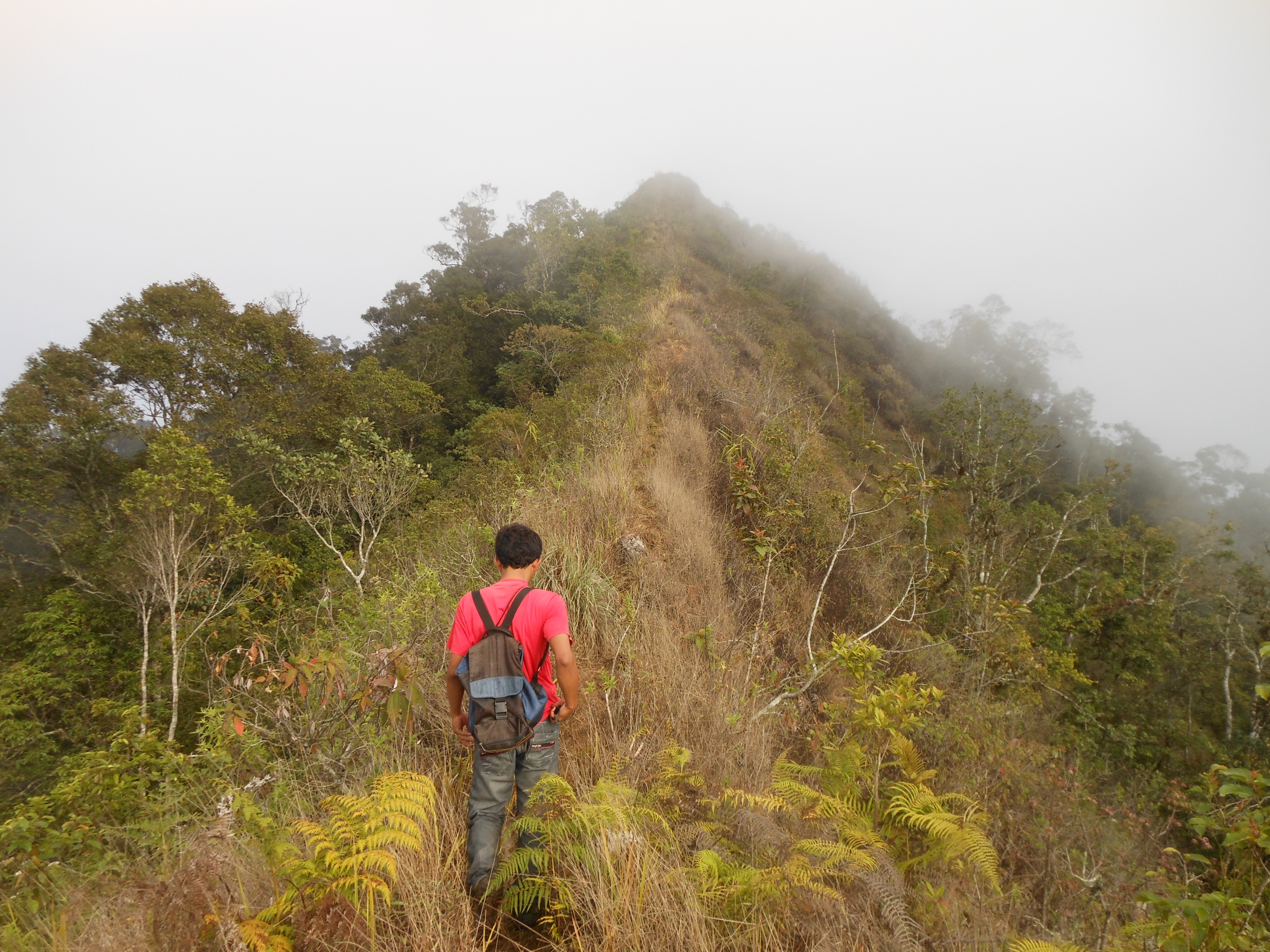 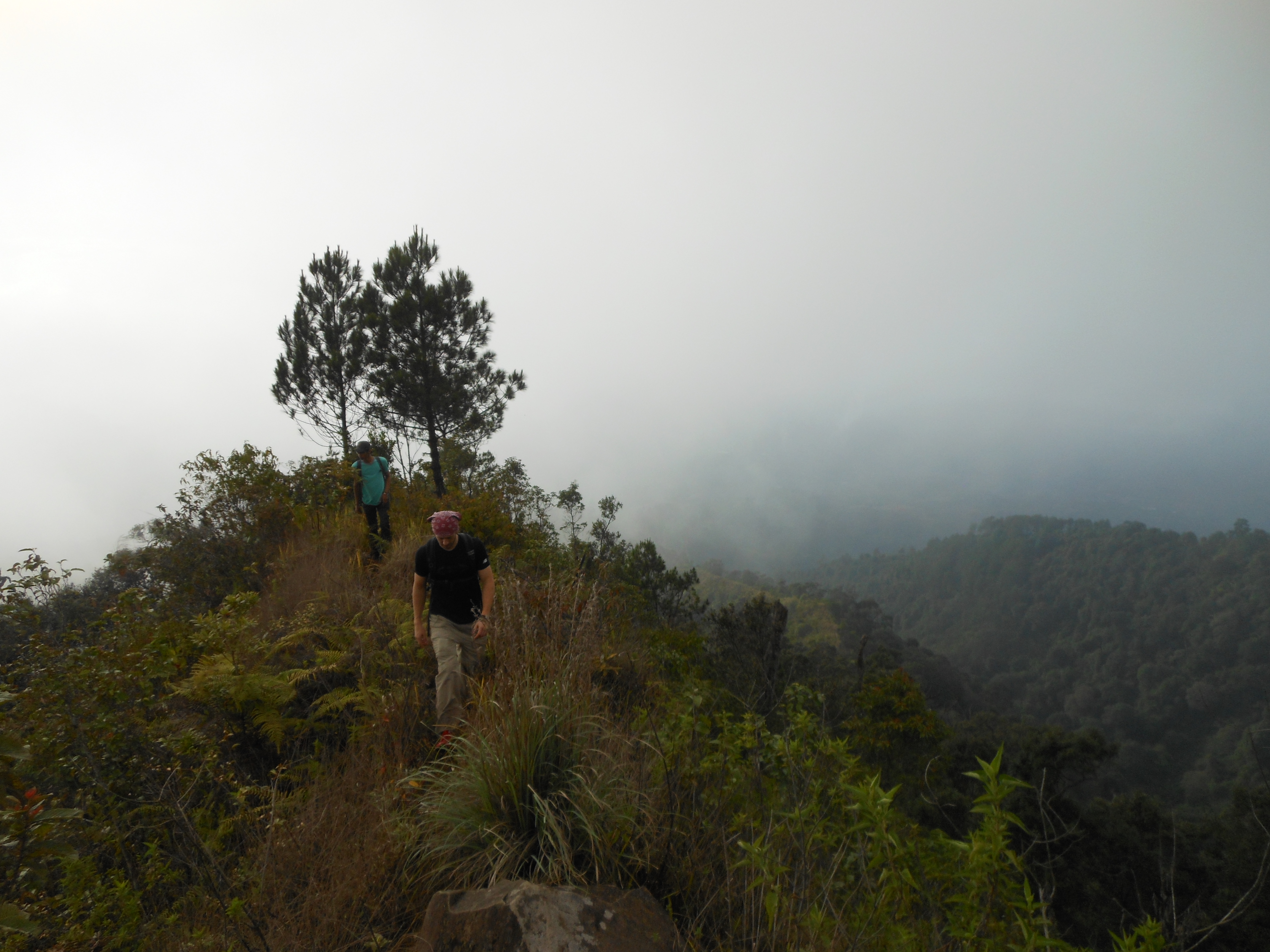 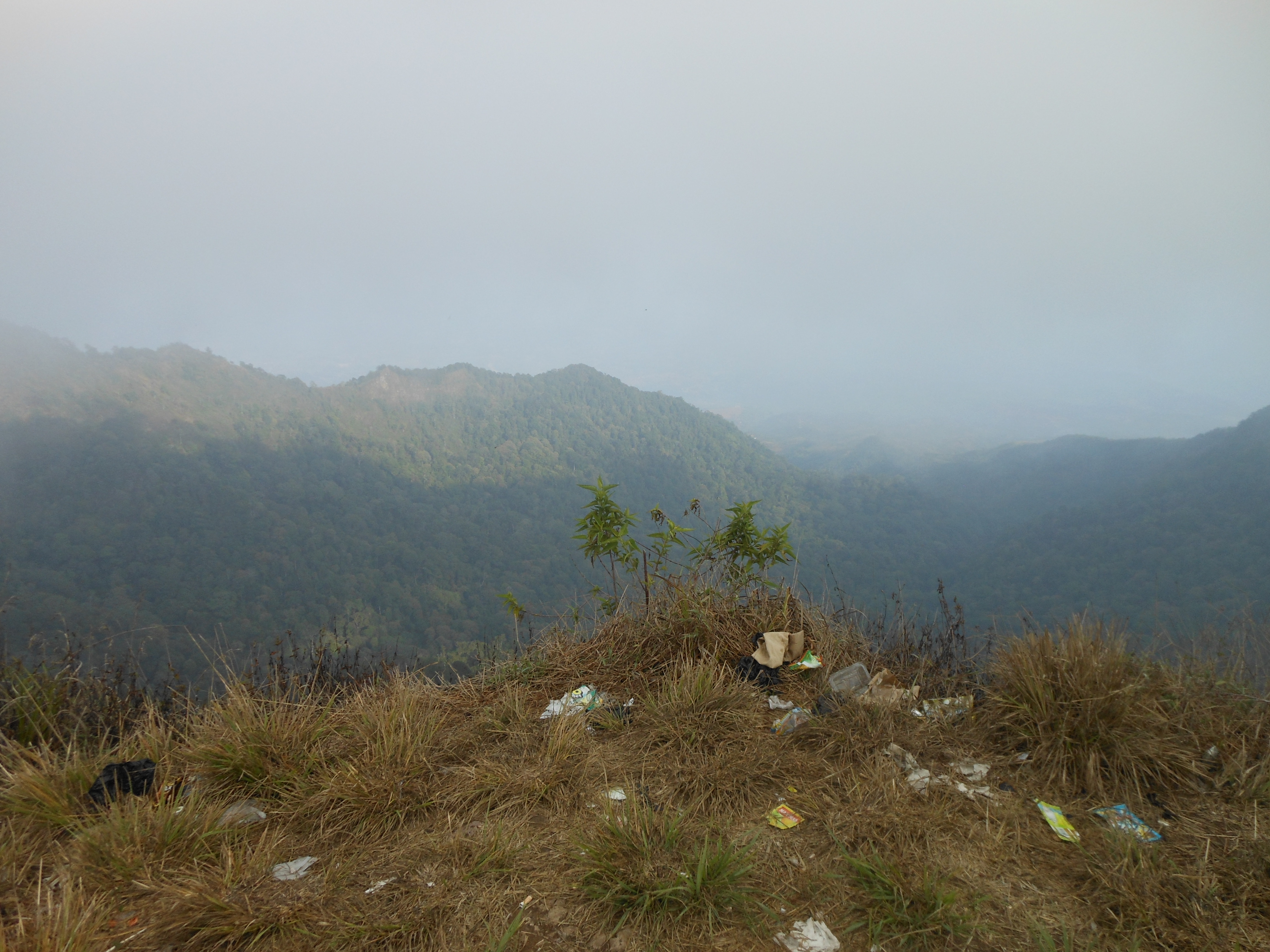 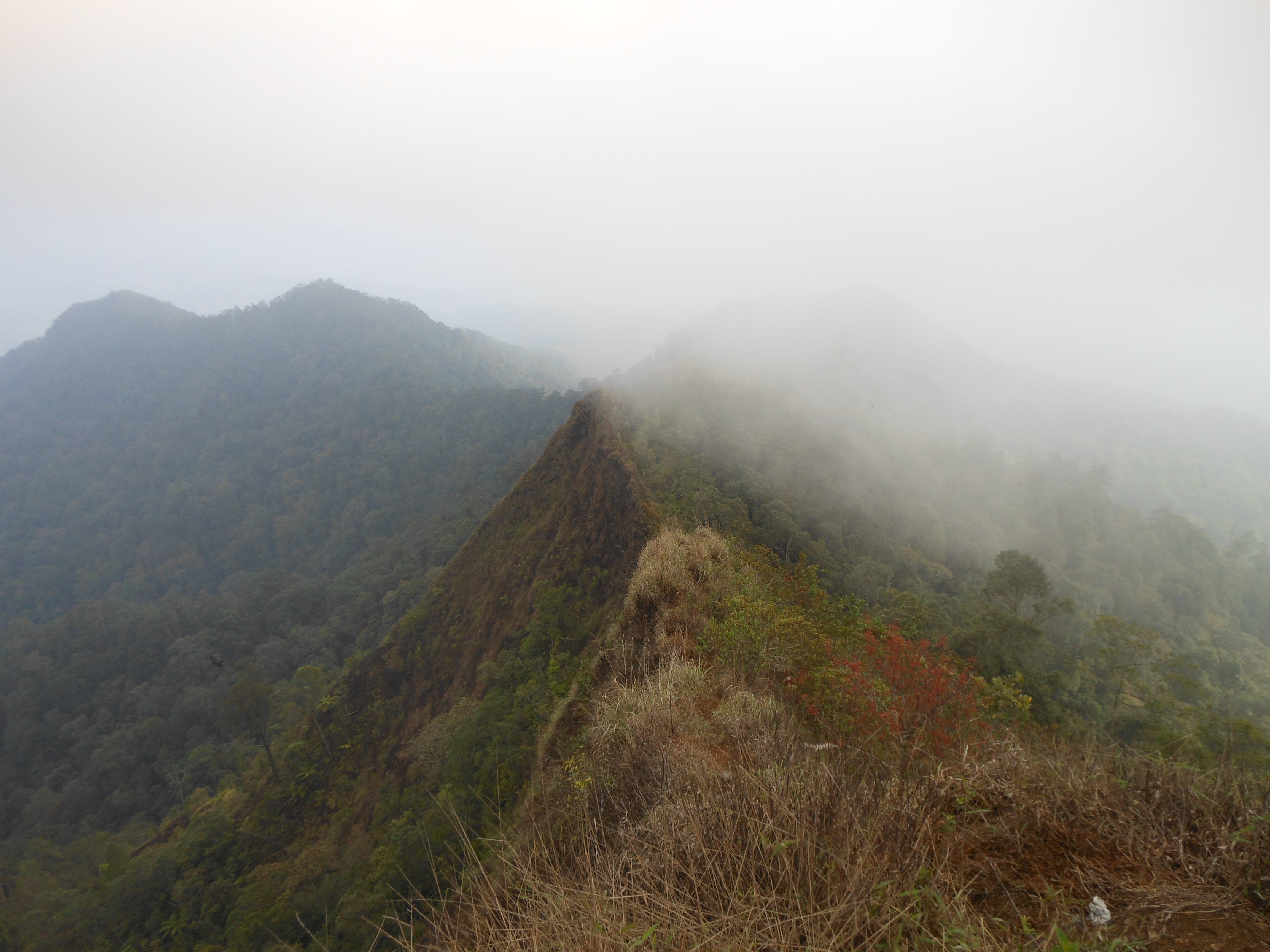 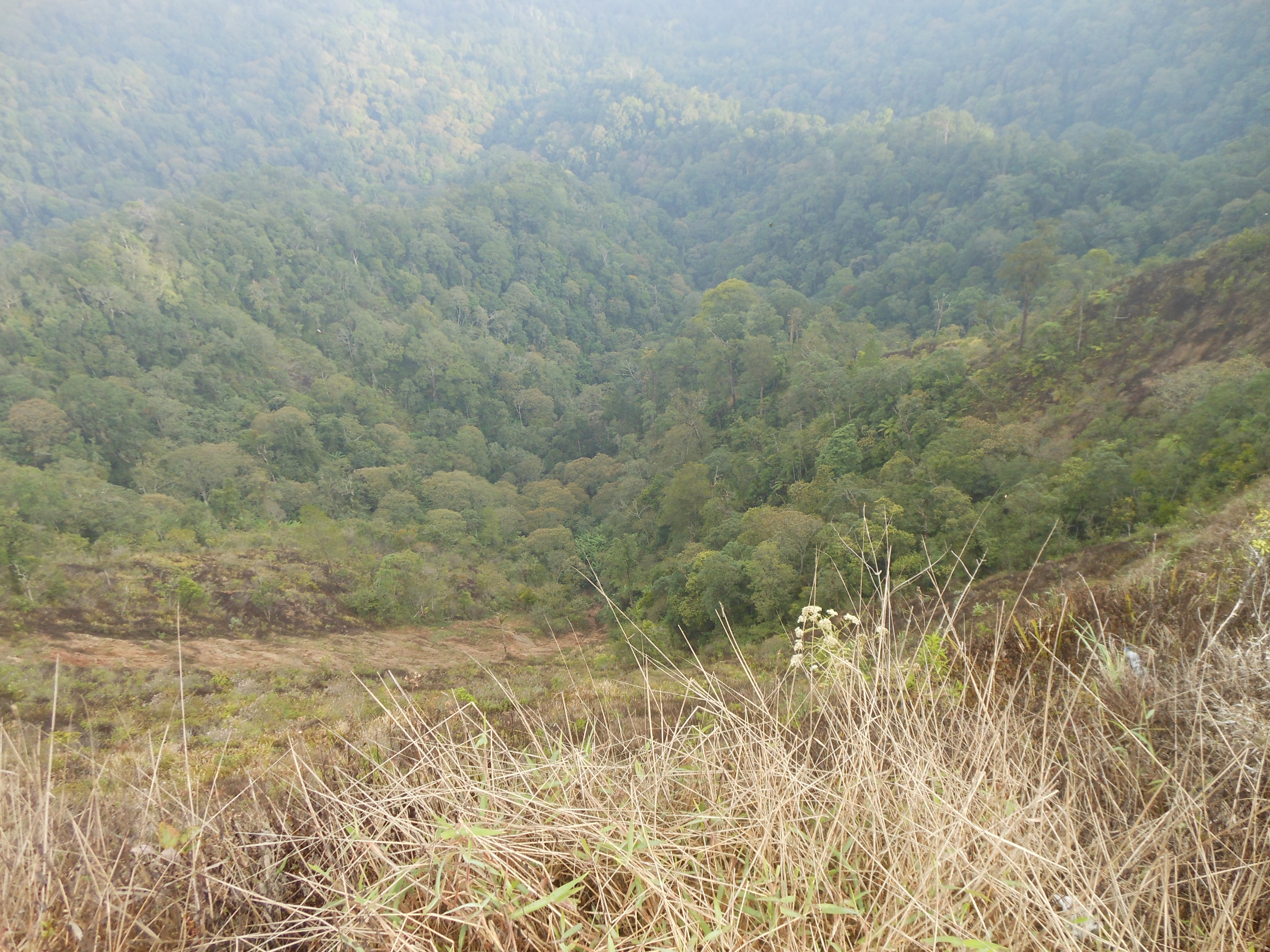 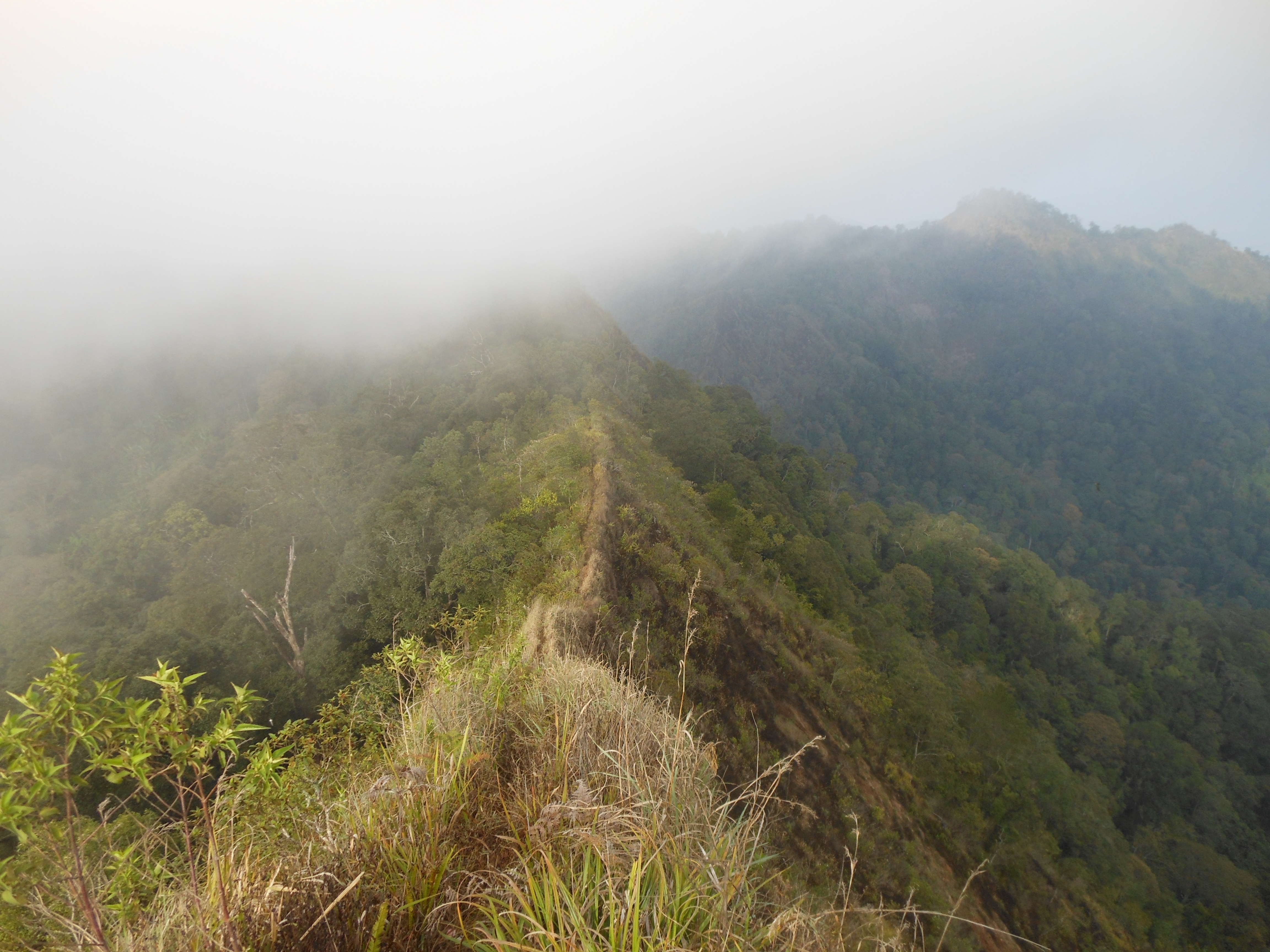 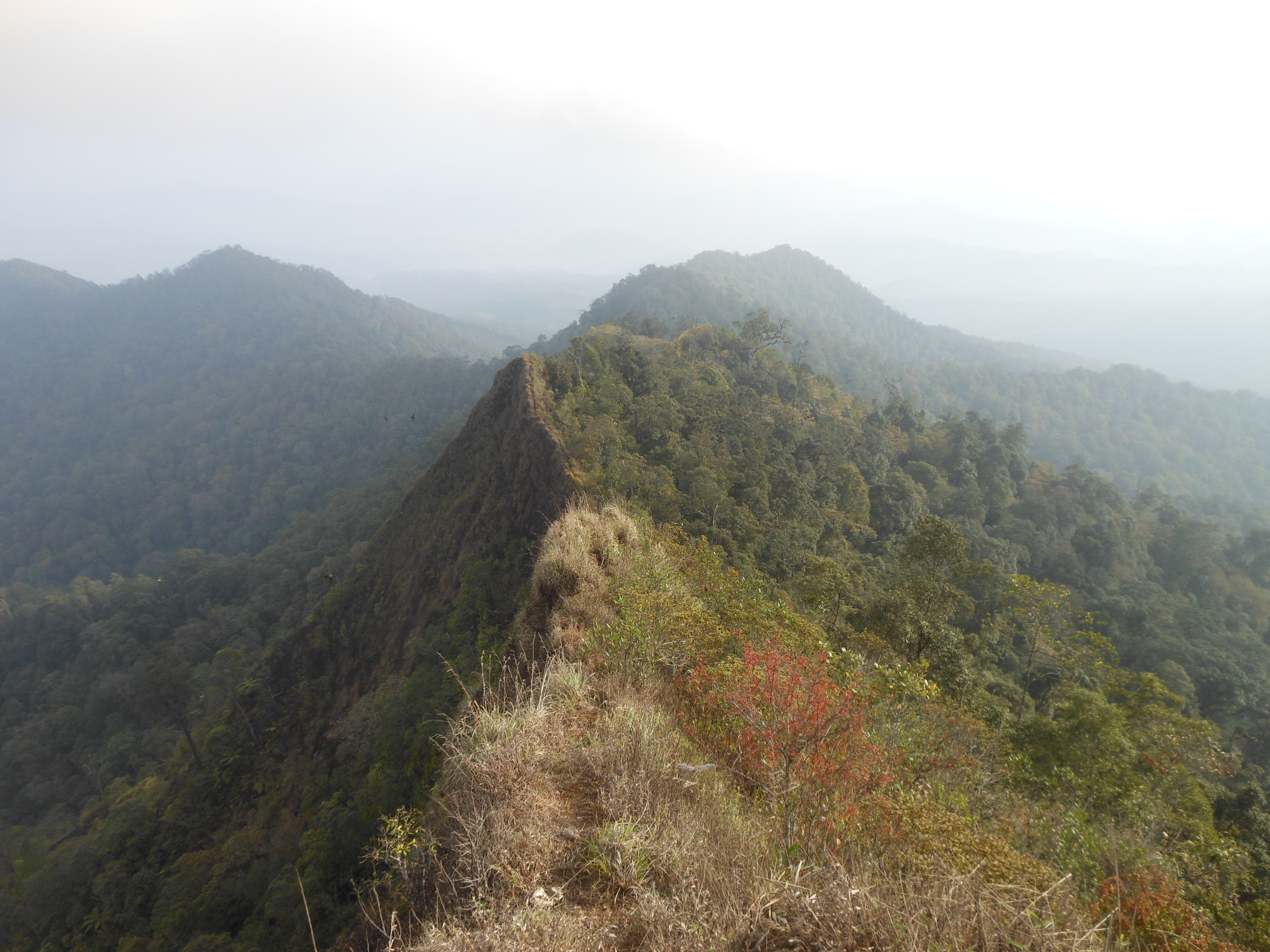 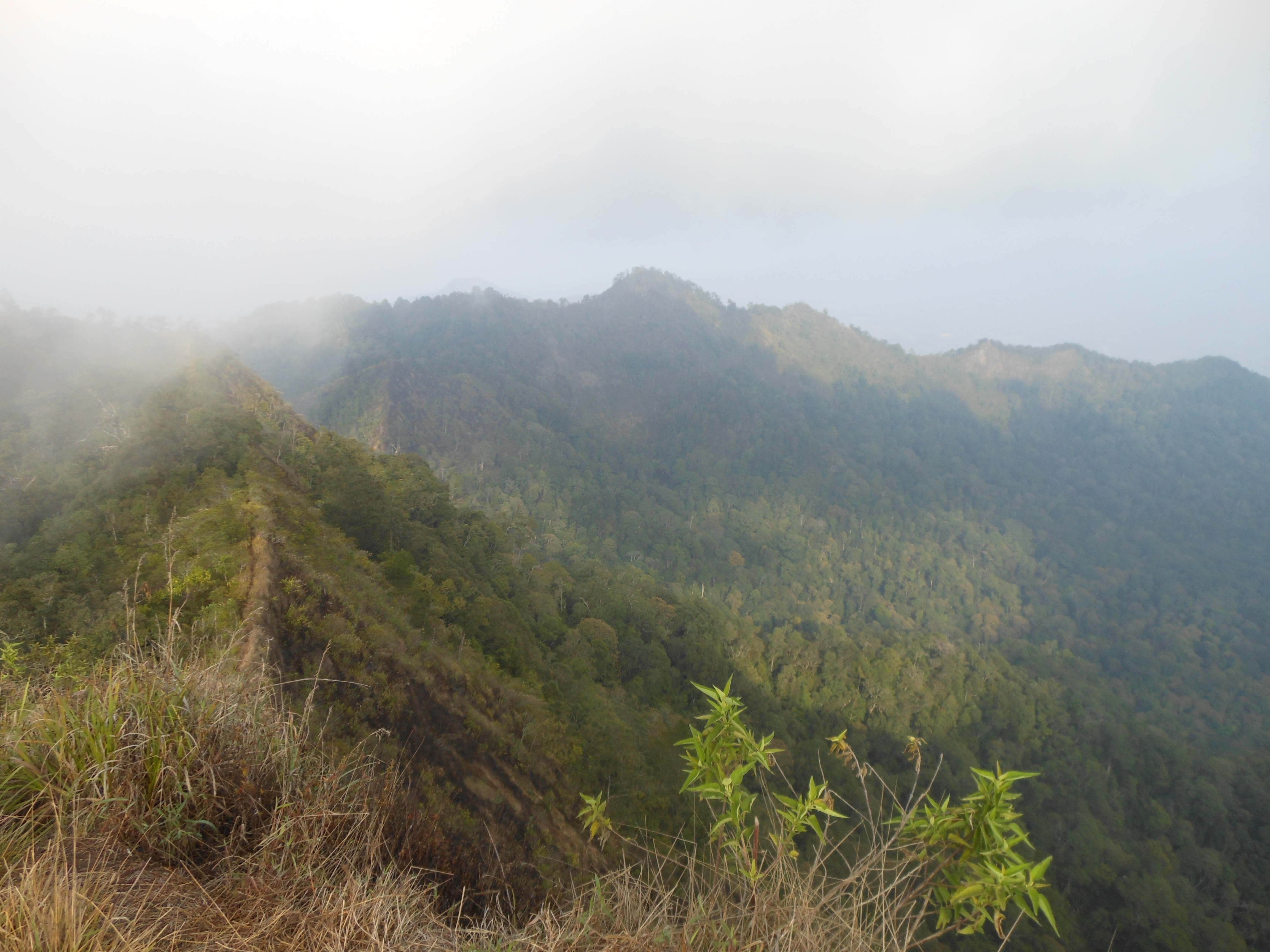 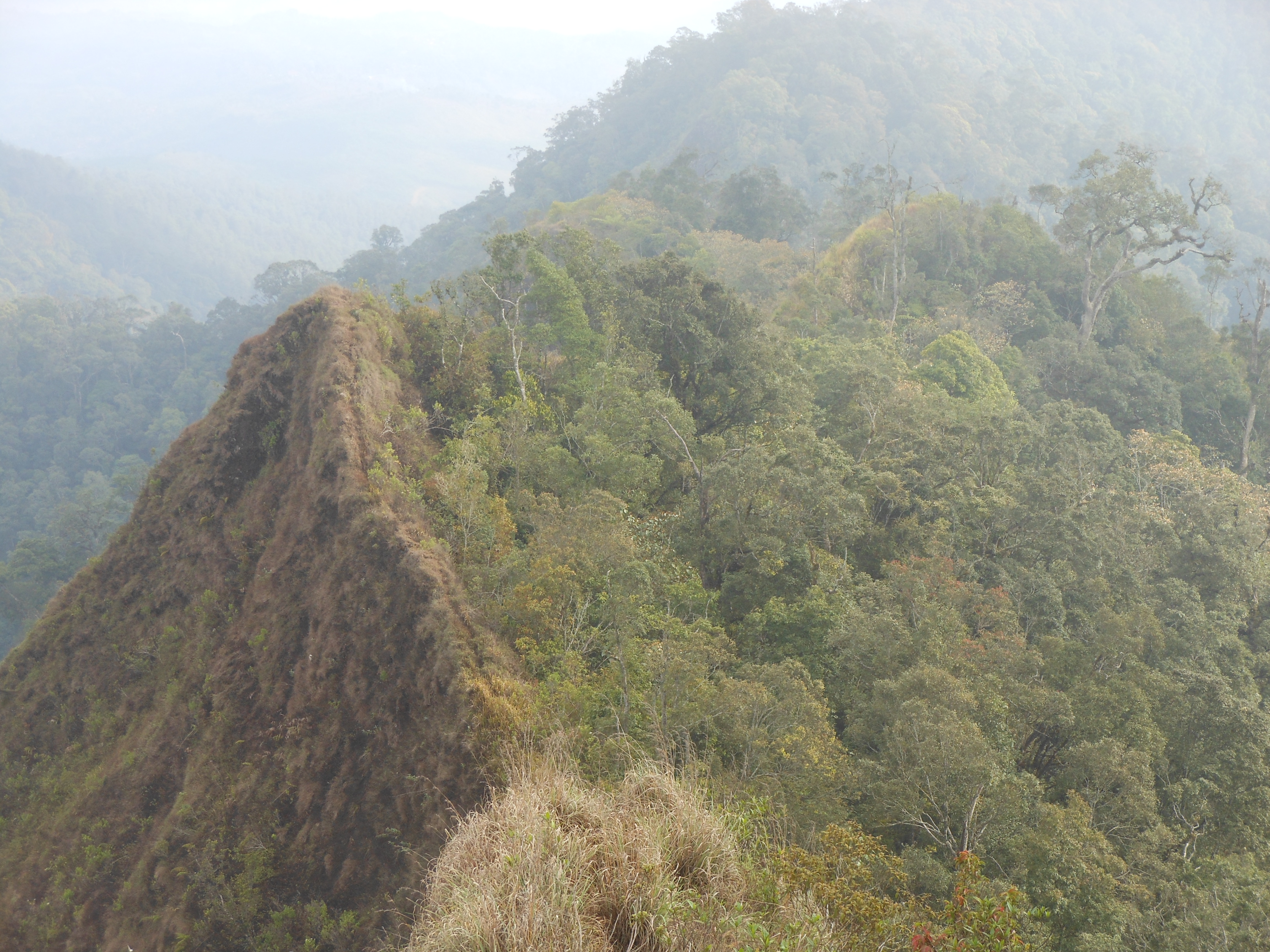 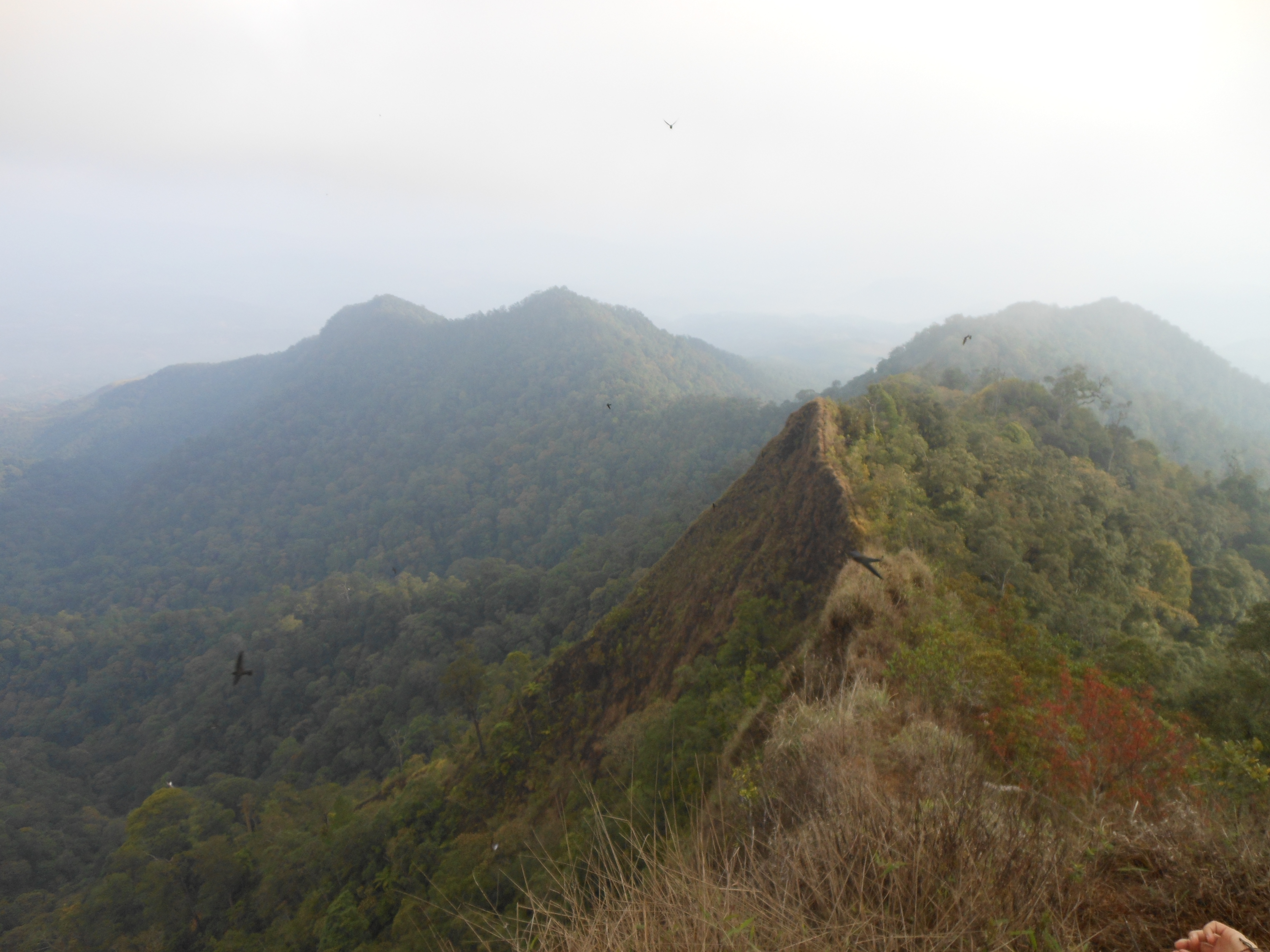 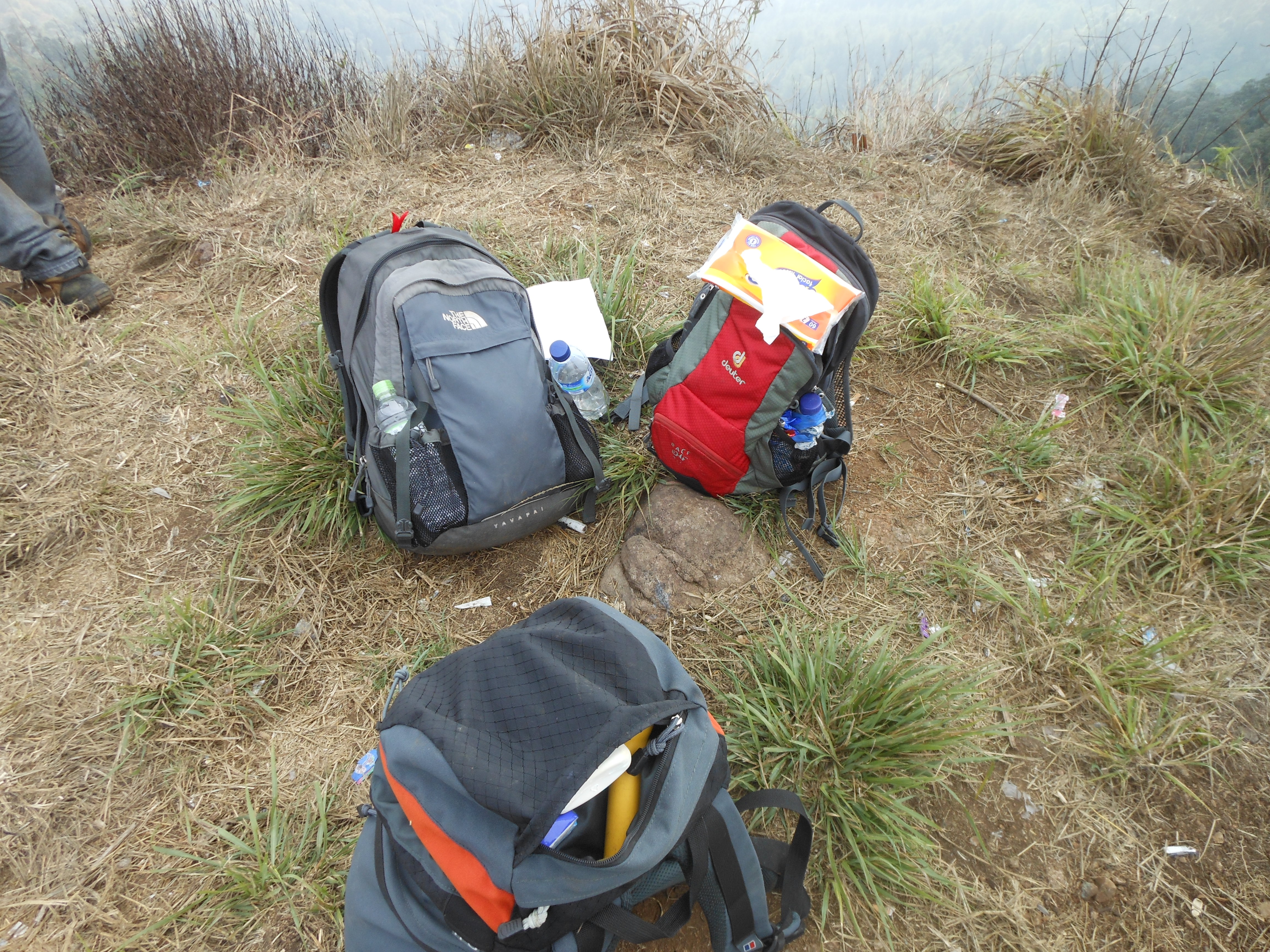 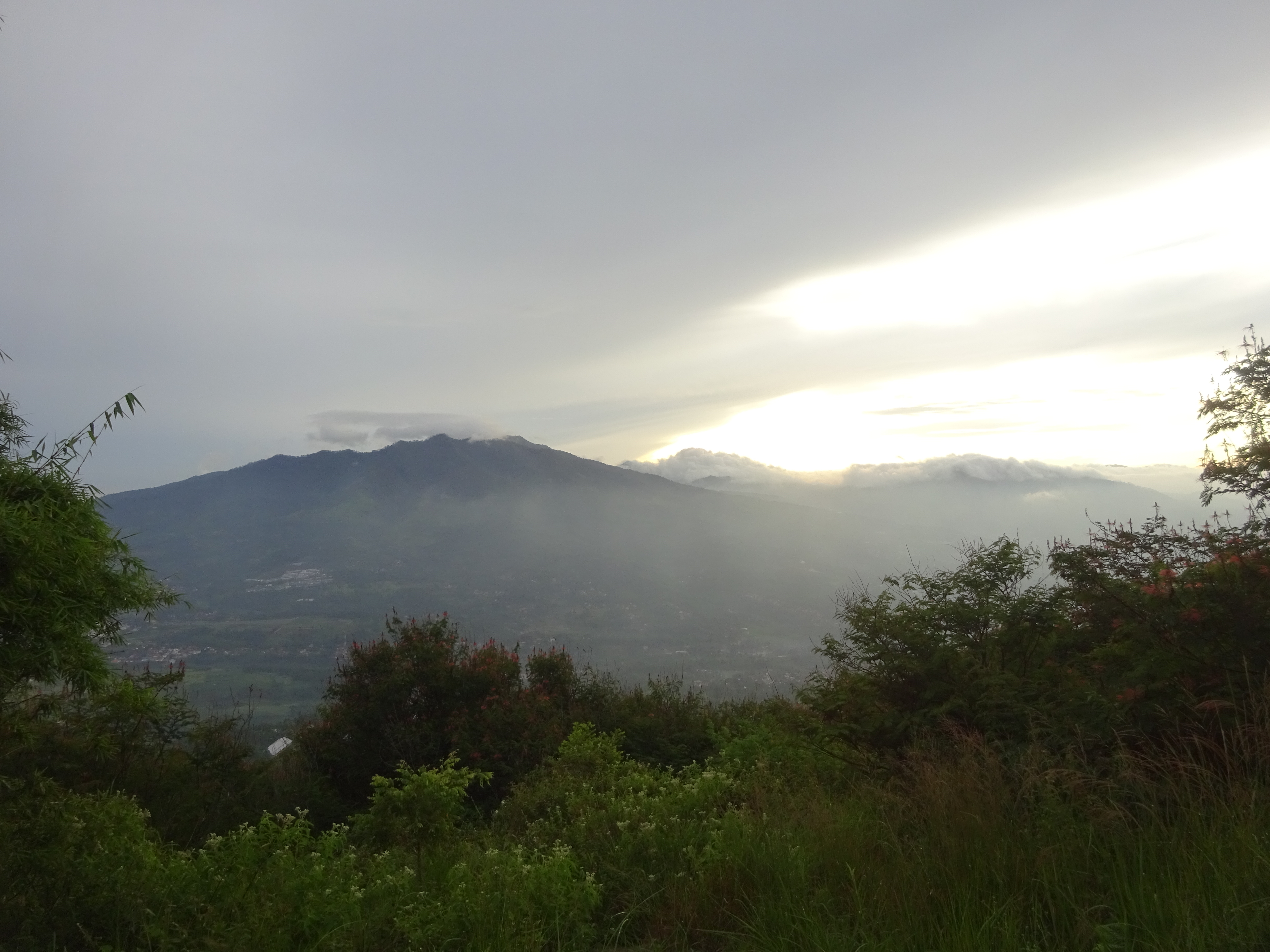 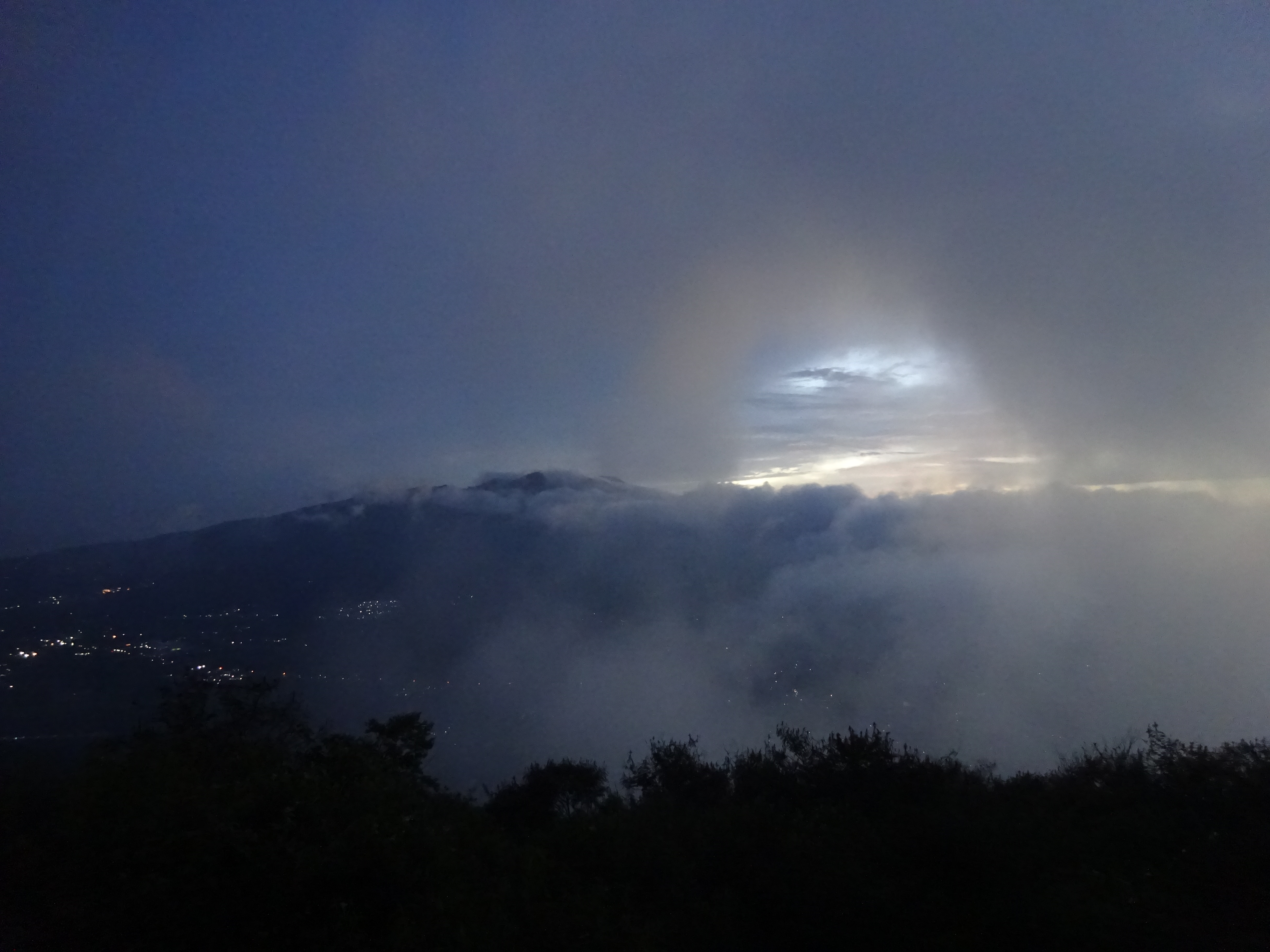 Gunung Kerenceng is something of a hidden gem, lying so close to Bandung but little-known outside of local West Java hiking clubs. It can easily be climbed as a day hike, taking no more than 2-3 hours up and 2 hours down. The summit area is a tiny equilateral triangle with sides of just 3 metres and is where three narrow mountain ridges meet. Kerenceng is very accessible but the views from the top easily fool you into thinking you are in a much more remote area.

For those who are happy to have a quick weekend trip out of Bandung or Jakarta this is the perfect mountain. Indeed, you could even do it as a (long) day trip from Jakarta. The closest place to stay is the modern and well-signposted Pondok Wisata Aki & Enin (850m) , a popular place with Bandung’s middle classes at the weekends. Note that there aren’t many rooms so you need to book well in advance. Otherwise you’ll have to either camp or stay in a tree-house at the end of the road at the Gunung Masigit Kareumbi conservation area (1,200m) or simply stay in Bandung instead.

The trail actually starts a little way back down the road at the last village and leads up through villagers’ vegetable fields including cabbage, bean and chilli. The little peak visible on the right is Gunung Buleud (1,423m). As with all trails of this sort there are many junctions between farm plots so a guide is almost essential.

After less than an hour from the last village you will be beyond the last of the farm fields and into the pine woodland. The ridge flattens for a while and views in all directions begin to open out. After dropping down into a little crevice and then back up again the ridge gets narrower and narrower and the pine trees become less and less in number. At this point you will see the tiny summit area ahead of you at the end of the ridge. As you get closer to the top you will need to exercise more and more care as a slip here really would have disastrous consequences. Those with a fear of heights may have difficulty on the final section climbing up to the tiny top.

Once on the little summit you will be rewarded considerably for what is a very easy hike with a brilliant panorama of genuinely wild areas of West Java. If you found the route up difficult, consider how much more difficult it would have been on either of the other two ridges that meet at the Kerenceng summit. To the left (west) is a knife edge ridge leading to a nameless peak with a height of 1,709m and on the right (northeast) is a jagged ridge leading to a nameless peak with a height of 1,610m and Gunung Pangukusan further round. The latter of these is an alternative route for those approaching the mountain from the Sumedang side. Straight in front of you is a massive, near-vertical drop down into a remote forest area which appears to be full of bird life. If you’re lucky you will be surrounded by swallows as they swoop around the airy summit. Gunung Kareumbi (1,685m) lies just under 2 kilometres to the west.

After admiring the excellent view, head back the same way to the village and the main road up the mountainside. It shouldn’t take more than 90 minutes to descend to the road where there are plenty of villagers happy to give you a ride back down to the bypass at Cicalengka for just Rp20,000 or Rp30,000 where you flag down a Primajasa bus and be back in Jakarta in no time. However, you might want to call off at the Sindulang waterfall before heading home.

The other routes are as follows (from east to west): From the Tanjung Wangi trailhead (1,110m) a trail leads up through farm fields and onto a ridge where there is a camp spot (1,725m). This is where another trail joins up from the Tegalmanggung trailhead (1,010m). Beyond the camp spot, the trail reaches the summit ridge at a junction (1,720m). Turn right here to reach the summit in less than twenty minutes and meet the trail up from Sindulang.

If you turn left at the ridge junction, you can follow the very narrow main ridge westwards via Puncak Batu (1,625m) which is unsurprisingly a rocky area and reach the summit of Gunung Kareumbi (1,685m). From here a trail descends to the west and down to Cimanggung (1,030m) which is the fourth and final of the four starting points used by local hikers.

There are many other mountains in this region of West Java and it is a very popular area for train photographers to take pictures of Kereta Api services running through this beautiful part of Indonesia between Bandung and Tasikmalaya, with the various hills as the backdrop. Indeed, during any hike in this area you are very likely to hear the sound of a train passing through the valleys below. Here are some of the most notable:

Lying to the west of the main Garut-Nagreg road and to the north of Gunung Guntur, this range has around four separate peaks, the highest three being the true summit, a northern top (1,595m on the Bako map) and a southern top called Gunung Masigit (1,618m on the Bako map) where there is a small military monument. Despite its considerable height and location not too far from Bandung, it is not hiked regularly and is easy to become lost on, so taking a GPS device and ideally someone who has already explored the mountain is highly advisable.

The highest peak is in the centre of the range and is best accessed from the north at Bojong, Nagreg. The end of the bumpy farm track is at around 990m above sea level and has several brick production buildings. Follow the narrow plantation path southwards as it leads into the dry river valley between the highest peak and a lower, 1,500m+ peak to the east.

At an elevation of around 1,305m there is a very important and un-marked trail junction. Do not continue to follow the main trail southwards as it becomes increasingly slippery and treacherous before reaching a dead end. Rather be sure to turn right (west) up towards the ridge of the highest peak.

The trail seems to disappear and re-appear frequently so GPS and local experience is essential to avoid becoming horribly lost! The next key landmark is a small Pos (1,390m) which feels like the start of a ridge. After this the terrain begins to flatten slightly as you make your way towards the summit.

The summit features an old grave, apparently the tomb of Nini Ranteng, with a small wooden fence around it. There are no views but it is a pleasant spot. Do watch out for leeches in the Mandalawangi forest, however, as there are a few more here than on most mountains of Java.

It should have taken you between 2 and 3 hours to reach the top. To get back down to the village takes around 1.5 to 2 hours, assuming you navigate well.

This shapely little mountain lies to the east of the main road to Garut. Gunung Kaledong can be hiked from several directions but is overgrown and despite being a small mountain requires up to 3 hours to reach the top. It is probably best accessed from Ciherang (756m) on the main road to the north-west. From here, follow the cement path up through the village, then the plantation tracks to the end of the fields and the start of the denser vegetation (931m).

In this area are several jackfruit trees (nangka) which if in season is some small reward for having to deal with a steep, very overgrown and seemingly pathless terrain! At the summit there are two small clearings just 50 metres apart. The southwestern one features an ancient grave and a yoni stone said by locals to be used as a mortar and pestle for pounding rice and other things. The northeastern one has a small depression and a cluster of stones plus (in 2020) a summit sign.

Appearing almost like Kaledong’s twin, Haruman is another independent hill further east of Kaledong and not far from Candi Cangkuang. An important Muslim grave site of Sunan Haruman lies on the eastern side of the mountain and is regularly visited by local people. Of course, the name alone, originating from the Hindu god Hanuman, tells you that the history of the mountain goes back to way before the arrival of Islam.

The lower top (Pasir Nangkod 951m on the Bakosurtanal map but more commonly known as Haruman Jingga) is actually used for paragliding and there is a wide but muddy farm track all the way up there from the west side at Harumansari. This track first skirts round a much smaller, sharp side-peak called Pasir Leutik (815m). The views to Gunung Guntur, Mandalawangi, Kaledong and the city of Garut are fabulous.

To reach the true summit, however, you need to leave the wide paragliding access road at a sharp bend at around 850m and follow a narrow path into the scrub. Apparently there is a rock vaguely resembling a horse (‘batu kuda’) at the summit. From reports it seems there are no views at the top. It looks to be fairly similar to the summit of Kaledong, in terms of vegetation, so a lack of proper trails and high risk of getting lost is to be expected.

There are several ‘summits’ of a similar height, with the south-eastern one being the highest according to the Bakosurtanal map. In 2017, one hiking group made a traverse from Harumansari over to Cipareuan, Cibiuk on the east side but it took a full day! Such is the slow going of progress due to the dense vegetation.

Lying to the west of Gunung Kerenceng, near the end of the toll road at Cileunyi, this is a more popular mountain and located pretty close to Bandung city. It is a shapely and individual peak, quite separate from all others. There are several routes up the mountain, the best of which is perhaps from Jatiroke to the west of the peak.

From Jatiroke, it takes only 90 minutes to the top. Motorbikes can be left at the warung at the end of the road (775m). The track leads to the right of a quarried area, past farm fields and is soon quite thick with bamboo. There is not much in the way of proper forest remaining here, so it is best to avoid the middle of the day because of the lack of shade.

The summit plateau features several spots of interest of unknown antiquity. First of all, a shelter with a grave inside is reached, just before an impressive wall with buttresses which encloses a tiled area and shelter. Between the first shelter and the walled compound, a trail leads down a few metres to yet another shelter which houses another grave. Beyond this third building is an opening which allows great views to the east and north, with Kerenceng, Tampomas and Manglayang all visible in good weather.

Back up near the walled compound, follow the trail along the top of the ridge for just two minutes to the wooden summit sign and numerous little camping spots. To the right (west) is another clearing which in good weather affords views over the Bandung plain to the Malabar range. In very clear conditions you can sometimes see Gede-Pangrango in the distance to the west beyond the city of Bandung. And finally to the south, the numerous tops of Gunung Mandalawangi can just about be seen over the summit vegetation on Gunung Geulis.

Allow just one hour back down to Jatiroke or one of the other trailheads. 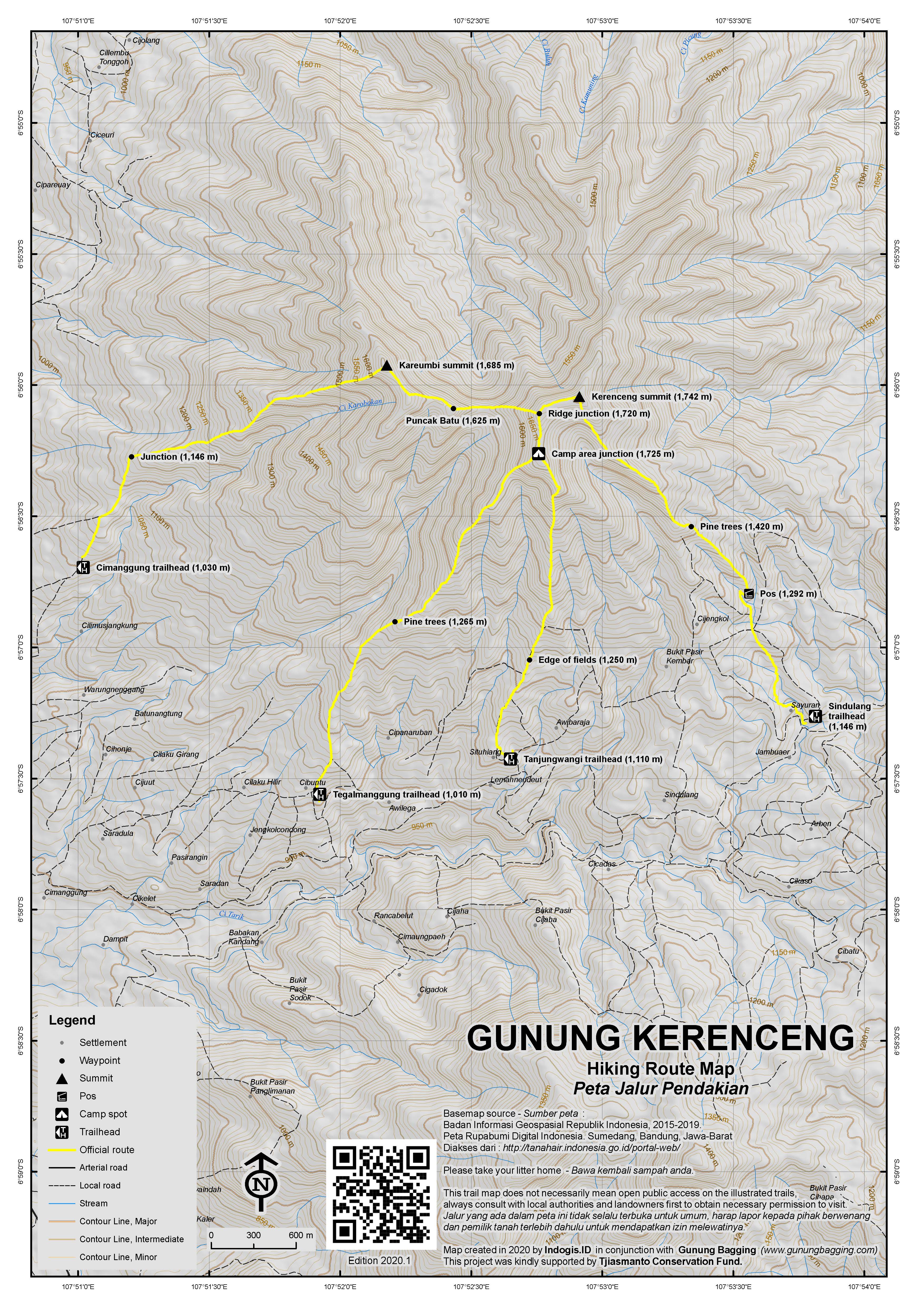