Gunung Gawalise is Palu’s iconic mountain and gives its name to a local sports stadium. Given that it is only about 20 minutes from a major airport with direct flights to Jakarta, you would expect that Gawalise must be one of Indonesia’s most accessible mountains. The views over Palu valley, bay and city are magnificent from its slopes, but considerable access issues remain at the foot of the mountain.

Gawalise itself is actually at the northern end of a vast north-south mountain range running many kilometres down the west side of Palu river valley. Peaks to the south on this range include Bulu Nti and Torompupu (both Ribus). Gawalise has three minor tops all over 2,000m in elevation, the middle of which is the highest (but – like the south one – rarely visited).

The most straightforward route up Gunung Gawalise is from the village of Desa Kalora (193m) which lies at the end of the road through the Silae neighbourhood. In years gone by, this was the normal starting point for many local student hikers and nature lovers but local people in Kalora have recently begun to prevent access to the mountain which is a real shame. However, what follows is an account of the traditional route from Kalora which may be of use if this trail once again becomes open. If not, try the alternative route starting further south from Desa Salena (details further down).

It is customary to climb Gunung Gawalise at night and reach Batu Gantung (‘hanging rock’, 1,667m) for sunrise before proceeding to the northern peak with a triangulation pillar, Indonesian flag and summit signs on it. This is mainly due to the mountain being deforested until beyond Batu Gantung, which means a very hot and sweaty ascent in direct sunlight. However, there are several Pos with areas suitable for a small number of tents so a two days and one night camping itinerary would make sense (assuming no access issues in Kalora). If you do hike up during daylight hours, try to choose a cloudy day!

On the Kalora route, farmers live in simple huts as far up the mountain as 1,180m. This means fantastic views down to Palu Bay, but the lack of shade from trees means a very hot hike as mentioned. The trail follows a thick metal water pipe at the very start, but there are several minor junctions so going with someone who has hiked here recently is a very good idea. The path is steep, muddy and slippery for much of the way, and coming down is harder (though usually faster) for most people.

Pos 1 ‘Kelapa’ (300m) is reached after just 20 minutes or so and features, not surprisingly, a cluster of coconut palms, in addition to chili, papaya and moringa oleifera (‘daun kelor ‘- very healthy stuff!) A tiny hamlet follows at around 600m elevation (after a total of one hour from the starting point), consisting of 3 or 4 simple village huts surrounded by another cluster of coconut palms. There is a water pipe here but please be considerate and ask local people first before you fill up your bottles. Given how close this mountain is to a provincial capital it is quite amazing to see families living such simple, traditional lives up here.

Another hamlet follows at 724m (after a total of 2 hours and 30 minutes from the trailhead) before the trail enters a tiny cocoa plantation (790m). You should have reached Pos 2 (948m) after a total of around 3 hours. Pos 2 is known to some hikers as shelter 1, but there is no shelter here except for a few clumps of large bamboo and indeed it is better known as Pos Bambu. Views down to the city are great in clear weather and if any of your party can climb palm trees then you may be able to enjoy fresh coconut juice!

5 minutes beyond Pos 2 is the final water source, 2 minutes to the right of the trail (signposted in 2018) and only a trickle from a bamboo pipe. Another 20 minutes up the mountain are a couple of flat rocks (1,170m) ideally suited to being sat on for a rest before continuing to the final hamlet (1,180m) which is surrounded by corn (‘jagung’) but commonly known to hikers as ‘kampung tengah’ which means middle village and refers to the village being about halfway along the trail from the trailhead to the northern peak. There are also occasional banana, clove and papaya trees up here.

The trail then follows a ridge for a while – enjoy the relatively flat trail while you can! – before ascending to slippery boulders (1,370m) and finally Pos 3 (1,475m) which provides enough space for a small number of tents near a large (but seemingly unable to fruit) mango tree. Pos 3 is known as Pos Mangga (‘mango’). There are also some colourful yucca plants here of considerable height. It should have taken about 2 hours to reach Pos 3 from Pos 2, or 5 hours in total from the trailhead. If you are camping, this may be a good choice as it is only another hour to Batu Gantung or two hours to the northern peak and there are some tricky rocky sections to negotiate near Batu Gantung which are not easy with a large backpack.

Batu Gantung (1,667m) is a brilliant spot. As the name suggests, there is indeed a hanging rock which the very brave may climb to take a photo. Views here are brilliant, especially at dawn and dusk. Look out for edelweiss and pitcher plants in the area, but be really careful as there are some deep holes between rocks here. Just a couple of minutes beyond Batu Gantung is another camping area (Pos 4) before the trail enters forest at an elevation of around 1,676m.

What follows is a pleasant hour of strolling through forest on a reasonably clear trail before reaching Gawalise’s northern top which is crowned with a large cement triangulation pillar, presumably from Dutch times. There is a section of aircraft wreckage (from a Merpati plane which crashed on the mountain in the 1990s) near the pillar and it is used to collect a small amount of rainwater for use in an emergency. Although there are no real views here as the peak is forested, the atmosphere is very pleasant and calm, especially given how close to Palu city this mountain is. A sign for the Salena trail is nailed on a tree and points down to the left (east) from the pillar.

The pillar is inscribed with the figure ‘2023’ but the very detailed Bakosurtanal map gives a height of 2,022m for this northern peak. The vast majority of hikers consider this to be the ‘puncak’ or ‘top’ of Gawalise, perhaps simply because it has a pillar on it. However, this is only the third highest of Gawalise’s 3 summits. Around 1.2km further south is the highest, middle peak of the mountain which is 2,029m in elevation and labelled ‘Gunung Uiayo’ on the Bako map. A similar distance beyond the middle peak is a more shapely, southern top which according to the Bako map is 2,026m.

Whether hikers frequent these two higher tops is unclear. The Salena trail appears to head down to the east from the northern peak but I have heard that the trail (requiring 2 full days or ideally 3) may go via the middle (true summit) peak. It requires further investiagtion but it is highly likely that there are no views from the other tops. They are also probably unmarked.

It should have taken you about 7 hours to reach the pillar from the trailhead and fit hikers could be back down in around 5 hours (not including breaks). This means it is technically feasible to do it as one long day-hike. However, there are several reasons why this is not such a good idea. Firstly, the descent is very tough going on the ankles. Secondly, you would presumably miss both sunset and sunrise at Batu Gantung (though you could consider hiking up at night for dawn there before proceeding to the pillar and then straight back down).

Finally, and most importantly, the local people in Desa Kalora simply do not want hikers there and have made this clear since around 2016. Even with written permission from a senior local figure you may well suffer considerable problems (see comment/ trip report below for unpleasant details from 2018).

This is a great shame given that Batu Gantung is on the Kalora route and also that this is the most accessible (and traditional) trailhead. It means hiking Gawalise as a weekend trip for Jakarta is not currently possible because the Salena trail is longer (requiring minimum 2 full days meaning flying out on Day 2 is probably not realistic). However, let us hope that the Salena route becomes more well-frequented and that both local hikers and local residents alike can benefit. There is probably enough demand that a local basecamp could be set up selling snacks and drinks to hikers as is common at the start of all major mountains in Java for example.

All in all, a great mountain marred by hostility towards local hikers by residents. 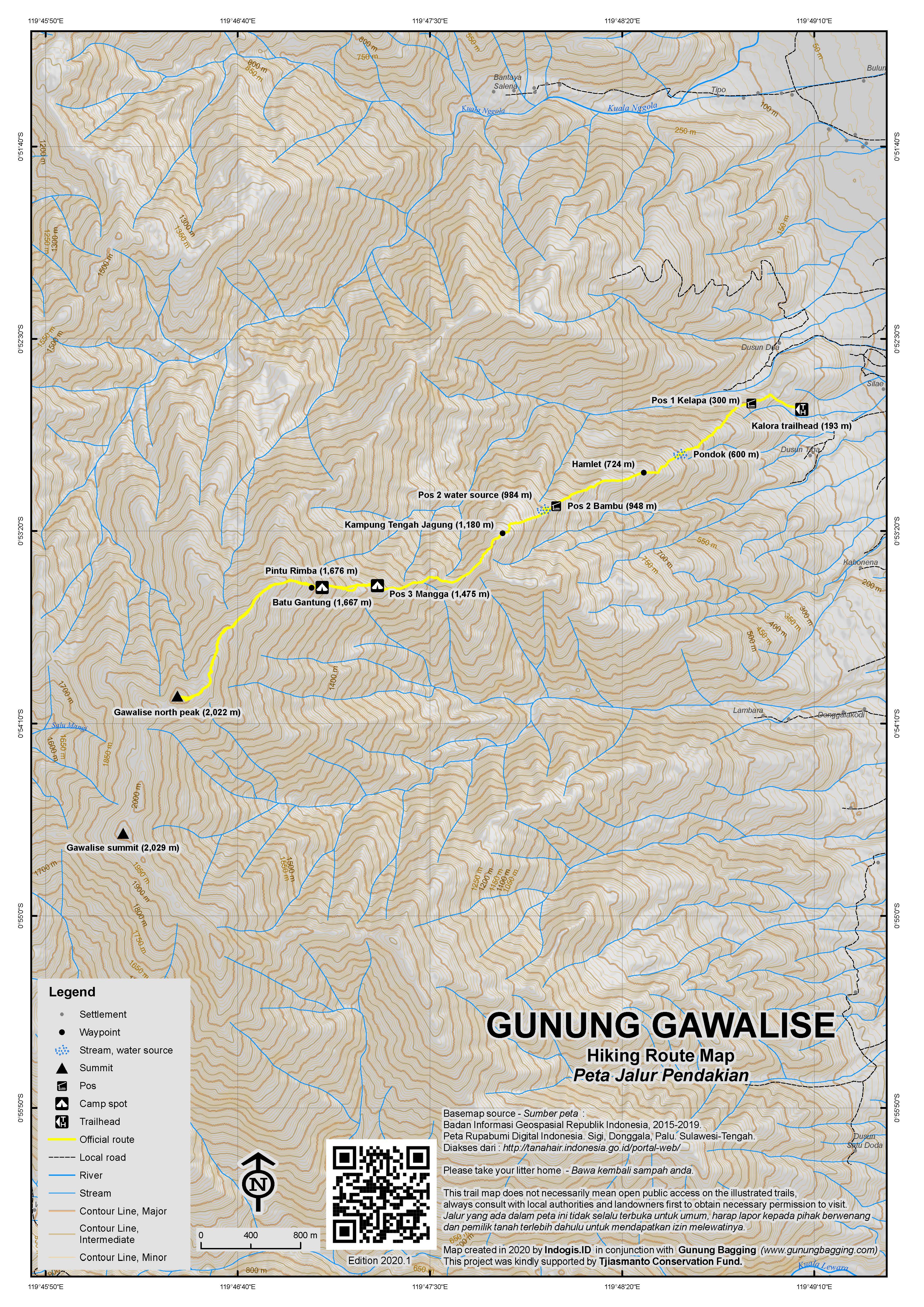