Gunung Gamalama is the volcano of Ternate, which lies in the volcanic chain off the west coast of Halmahera – Ternate, Tidore, Moti, Makian and Bacan. Like Kei Matubu (Tidore) and Kei Besi (Makian), Gn Gamalama dominates the entire island leaving only a narrow coastal strip and the lower slopes of the mountain for plantations. Coconut, nutmeg and cloves are the dominant tree crops. The Sultanate of Ternate grew powerful through control of the clove and nutmeg trade throughout the eastern region and, often in conflict with the Sultanate of neighbouring Tidore, entered into intrigues and conflicts with European powers – Spanish, Portuguese, Dutch and English – over the spice trade from the 16th century onwards.

Gamalama is highly active, erupting most recently in 2015. The 1770s eruption created what is now Danau Tolire Besar, a large crater lake on the north-western side of the volcano. The 2015 eruption has changed the face of Gamalama’s volcanic cone with a large vent appearing on the face that climbers normally ascend to the crater rim. Not surprisingly, the mountain is sometimes closed due to volcanic activity and it would be very unwise to ignore local warnings.

There two routes up Gamalama from the town: from Marikurubu (about 275 m) and Moya (about 345 m). The Marikurubu track is steep initially and easy to become lost on the descent – although you will invariably end up somewhere near the start point. The Moya route may be a bit longer but has a much more clearly defined track used by villagers to work their plantations, is a much steadier climb, and passes through lovely, old cinnamon, durian, nutmeg and clove plantations. Finding a guide at Moya should be no problem. Hikes do not get much more fragrant than this.

The climb from Moya to an open camping area, known as ‘Terminal’ (1,343 m), takes about 3 hrs. The trails from Marikurubu and Moya meet at this point. Thereafter, the trail ascends to the point at which the mountain becomes ‘holy’ (about 1,580 m, 1 hr). Several steep ravines are crossed in the process.

Most mountains in Halmahera have a point where they become ‘holy’ – perhaps from earlier animistic beliefs! While your guides may not be able explain the origins of these beliefs, they do take them seriously so be respectful. Urinating beyond the ‘holy’ point is forbidden. Gamalama’s ‘holy’ point is at a high point in heavy cane grass from where one gains a first view of the mountain’s volcanic cone.

From this point, the trail descends and passes through heavy cane grass until emerging onto a ridge that looks directly onto the volcanic cone of Gamalama. Several graves, whom locals believe are of earlier sultans, are on this ridge.

Subject to Gamalama’s level of activity, you can walk down into the small valley below and begin the climb of the cone to the crater rim. Since the 2015 eruption and formation of a vent on the southern face, the ascent would have to be up the western face. This ascent takes about 45 minutes climbing up very sharp, often loose rocks. The edge of the crater is very hot underfoot and the crater very active. Sulphur gas blows across the peak continuously.

In good conditions the views are fantastic. The perfect cones of Kie Matubu (Tidore) and Jailolo (Halmahera mainland) and other small islands nearby are visible.

The descent to Moya takes about 3-4 hours. At ‘Terminal’, take the left-hand track to Moya – the right-hand track leads to Marikurubu, which is not preferred. 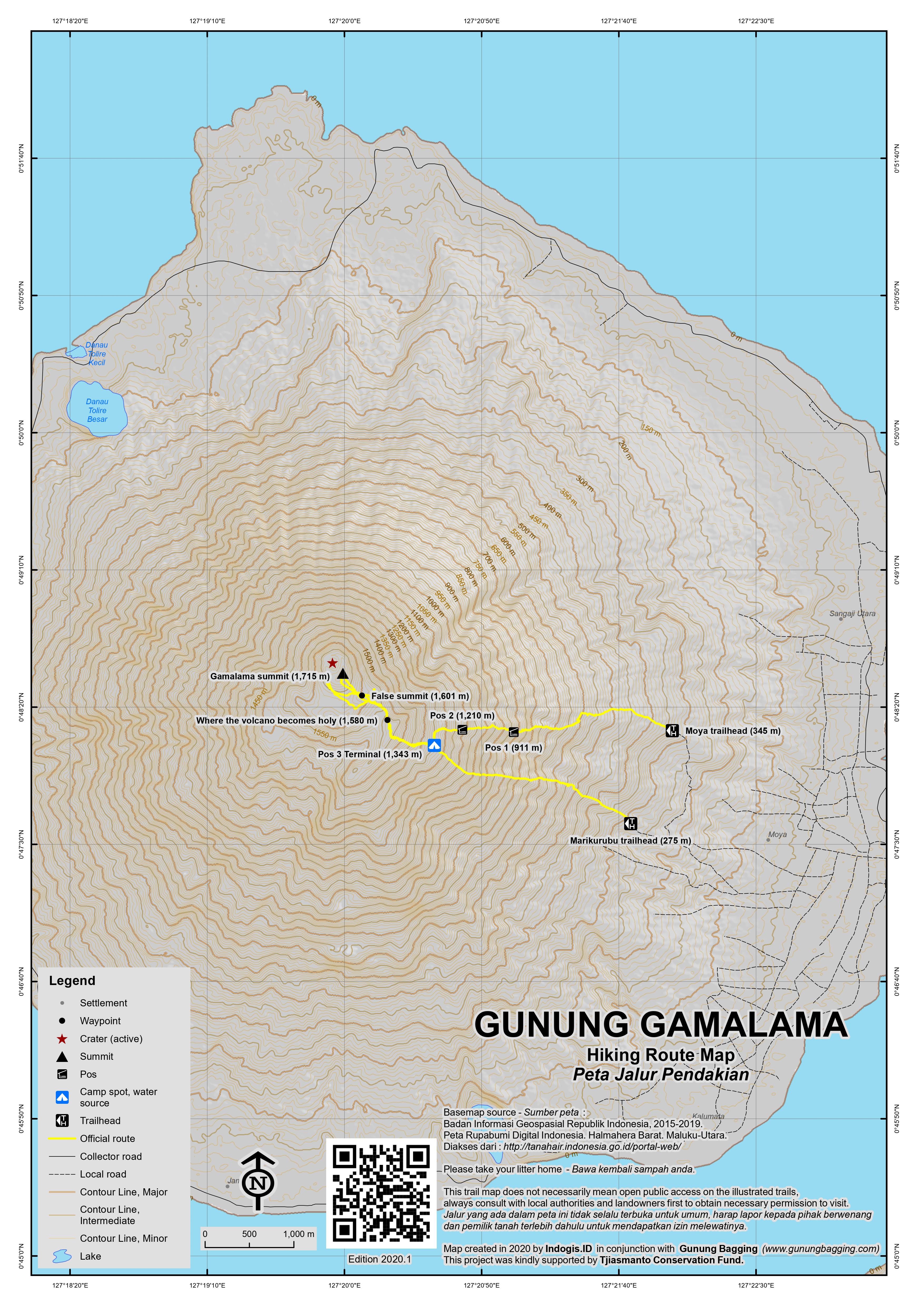