Dua Saudara is the highest mountain in the area to the east of Gunung Klabat in North Sulawesi. There are actually three main peaks that give their names to the Tangkoko-Batuangus-Dua Saudara National Park area. Despite its impressive stature, Dua Saudara is rarely climbed and the only information we currently have is that a route may be possible from the Bitung side.

Tangkoko is the northeastern-most volcano on the island of Sulawesi and lies about 3km northeast of Dua Saudara. It has a large deep crater which is today populated with numerous rare species of animal and plant. Back in 1801, the crater contained a cone surrounded by lake water. At this time, the a new flat-topped lava dome emerged. This was named Batuangus (literally ‘burnt rock’) and was the source of later volcanic activity (most recently in 1880). The nature reserve was created in 1942 by the Dutch.

The nature reserve itself is one of the most beautiful rain forests in Indonesia and is the best place to spot the rare tarsier. Many foreign tourists visit to see the creature at dusk or dawn, plus the black monkeys, numerous hornbills and cuscus. Occasionally guides take people up to the Tangkoko crater rim but most are content to stay lower down near the famous animal attractions. The friendly village of Batuputih is an excellent base and many guides are highly knowledgeable about the area. Despite that, there remains little information on Dua Saudara itself so what follows is an account of the hike to the crater rim of Gunung Tangkoko (1,109m).

The village of Batuputih is a very peaceful place. Numerous homestays surround the entrance to the national park and local people derive much of their income from tourism. A beach of black, volcanic sand lies just a five minute walk from the homestays. Iwan is a young guide with an excellent reputation and is one of the best people to ask for advice and information not only about hiking but also about the plants and animals that live in the reserve. He is recommended and can be contacted in advance via his website Tangkoko Wildlife.

The best time to arrange to meet your guide is at around 4.30am so that you can go to see the tarsiers on the way up. From the homestays it is about 2 kilometres to the start of the hike and you can hear the ocean roar. One of the best places to see the tarsiers returning home after the night’s activities lies less than twenty minutes from the trailhead at an elevation of around 100 metres. Guides place grasshoppers on the side of trees to coax the tarsiers out so that people can take close-up photographs of them.

From the tarsiers tree the trail to the Tangkoko crater rim leads straight up the mountainside and is generally of a pleasant gradient until the final 30 minutes. In the same area live cuscus and you may see them around 6am nibbling on leaves on the highest branches on trees. You will also see some of the thickest tree trunks in Indonesia and at an elevation of around 500 metres hornbills are very common indeed. Watch out for tarantulas and, most importantly, green vipers. The latter are not particularly shy and have been known to bite hikers in the past. Should you be so very unfortunate to succumb to such an eventuality you must get to the clinic in Batuputih as soon as possible so that they can administer antivenom.

When you finally reach the crater rim (1,030m, after at least 3 hours from the tarsier tree) you will see a large 1km-wide caldera beneath you. Indeed, without the dense foliage those who suffer from vertigo may feel uneasy here. The highest point of Gunung Tangkoko appears to be to the right (southwest) but a trail created in November 2012 by scientists from a university in Manado researching bat species peters out after just a few meters and it would take many hours with a machete to reach the true high point. A long, narrow ridge connects this with the higher Dua Saudara though nobody has traversed it for many decades.

Instead you may head to the left (northeast) on a vague and overgrown trail which rises steeply through dense grass and bush on the edge of the rim. In November 2012 it appeared that nobody had been along the rim itself for perhaps as long as a year although locals from Batuputih often climb this way for New Year’s Eve despite there being only enough space for a single tent. After reaching a minor top with very limited views you must drop down again before ascending to a top which offers views along the ridge and out to Bitung and the Lembeh Strait and Lembeh island. Further to the northeast lies a double topped lesser peak which is apparently the ash cone Batuangus created back in 1801 although because internet sources state that Batuangus is a mere 450m high and that this grassy top would appear to be more like 950m it may well be the case that the Batuangus cone lies beyond the peaks visible further along the ridge.

Before heading back down to Batuputih, ask your guide to show you where the pitcher plants are. A minor trail drops down just 10 metres or so from this second, viewpoint, peak to a rock and an area which is home to several pitcher plants. From the lower part of the rim it takes just under 3 hours to descend to the tarsier area and a further 15 minutes to the trailhead. 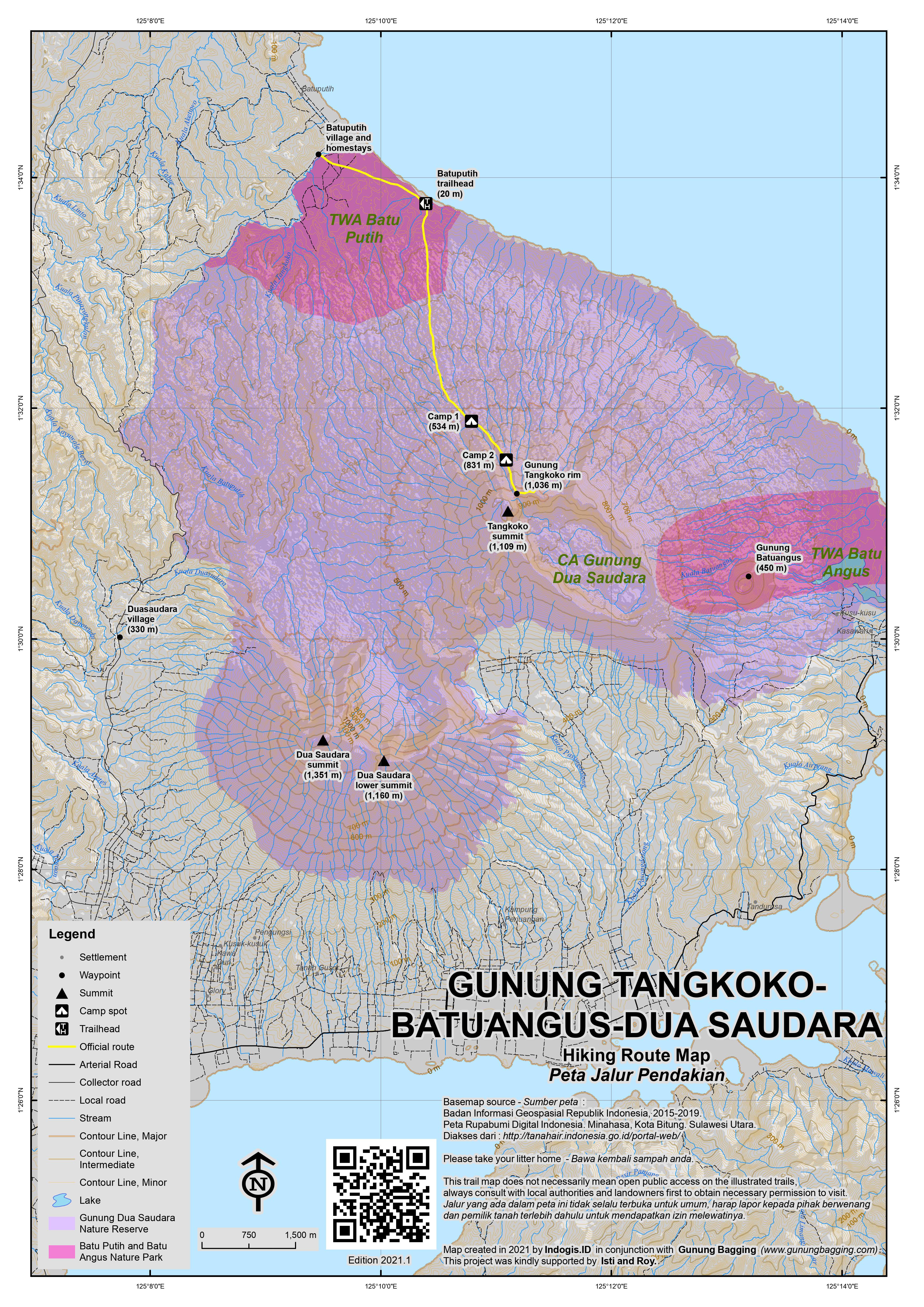