Gunung Batu Putih (‘White Rock Mountain’) is very close to being a Ribu and is indeed one of the most significant hikes of the Main Range. According to Malaysian hikers who include Gunung Gayong in their list, it is the eighth-highest in the Malay Peninsula. The forest here has a few leeches so leech socks are moderately recommended depending on the month you climb.

Because it just misses out on being a 7,000 foot peak it is significantly quieter and far less well-marked than other high mountains of Malaysia although you will probably meet another group or two when hiking on a weekend. It takes around 9-10 hours up and 7-8 hours back down, meaning that those who attempt this as a dayhike are highly likely to be trekking for several hours in the dark or having to turn back before reaching the true summit. A night camping on the mountain is recommended for this very reason.

In his ‘The Jungle is Neutral’ memoir about life in the jungles in 1940s Japanese occupied Malaya, Freddie Spencer Chapman compares Gunung Batu Putih unfavourably with some of the more shapely peaks in the region, calling it ‘impressive but always rather shapeless and grim‘ by comparison. He later writes of the “dark shapeless mass of Batu Puteh, where we had lived for a year or more” – presumably during his time at nearby Gurun camp hideout, evading the Japanese.

The trail starts at an Orang Asli village 10km up the Sungai Woh dam road from Kuala Woh Recreational Forest at an elevation of just 260m. In the past, a 4WD was used to transport large groups of hikers from the Forest office, but in 2020 most people park their cars at the end of the road and give a little cash to the Orang Asli (and/or buy some ‘petai’ – the bitter beans which are cultivated in large number locally). There is enough room for about 8 cars to park on the verges.

At first, the route drops immediately on a slippery and steep concrete path before rising up steeply on the other side of a small stream. Be careful here as it really can be slippery. Immediately afterwards you are in the final Orang Asli village. The trail leads near the river on fairly flat ground. However there are several trails with unmarked junctions so this can be quite confusing without a guide. Indeed, aside from the occasional piece of plastic tied to a branch, there are no signs until the peak itself.

In around 45 minutes you will have reached Sungai Y – the point where the Sungai Telom and Sungai Woh rivers meet and also the point at which you need to cross the river Woh. After heavy rain, this is perhaps the most challenging part of the whole hike. This is because you have two options – to wade across the often deep river or use a very rickety bamboo bridge (330m) constructed several metres above the fast-flowing river by the Orang Asli.

The bamboo bridge could only be described by any health and safety officer as exceedingly dangerous! For local villagers it is probably very simple to get across, but hikers from the city are likely to be somewhat daunted when they see what they have to do! If the river is reasonably low, it is safest to wade across rather than use the bridge. After heavy rain when the river is swollen and fast-moving, the Orang Asli bridge is the only real option (aside from cancelling your hike or waiting several hours)!

The trail then leads up via Kem Balak 1 (500m), an un-named Pos inbetween (874m) and Kem Balak 2 (1,045m). All these spots are fine for camping at and water is never too far away but ideally you want to be higher up. Look out for wild pigs and hornbills in this area.

Beyond Balak 2 at a minor junction (1,173m), there is an option to hike via the impressive Gua Azan (1,170m – a large boulder providing shelter from the rain) before rejoining the main trail (1,217m). Gua Azan is the last easy place to find water – with a lovely torrent gushing from inside the rocks – and therefore makes sense to have lunch and fill up bottles here. You should have reached this point in around 5-6 hours from the very beginning (not including any long breaks).

The next major landmark is a cluster of large rocks with several aluminium ladders (1,400m) attached somewhat loosely to them. You can tell you are approaching this as the trail gets progressively steeper and then near-vertical! It is only around 1 hour beyond Gua Azan.

At the top of this is a great viewpoint, known by some as Gunung Lintang or Gunung Batu Kak (1,455m). Be aware of the lack of clarity on names if taking a guide from the Orang Asli village, as some reports have said that this was as far as the local guide wanted to go. In clear weather you can see the true summit ahead of you plus a lower peak before it featuring a substantial and beautiful pale cliff-face. This cliff is what gives Batu Putih its name.

Beyond this point, the trail heads down a little before reaching Kem Anaconda (1,740m) after about one hour. The flat ground here is almost non-existent, with tree roots making it a bad choice. You will already have been able to hear a waterfall down below to the left. This is known as Air Terjun Terbunuh and is the last water point on the trail but requires a steep and considerable descent from Kem Anaconda so, once again, best fill up earlier at Gua Azan or before.

The true summit has a metal beirut at the top and is a further 1.5 to 2 hours. As is common on the highest parts of the ridges, the terrain is beautiful mossy forest yet incredibly slow-going and tiring for hikers having to squelch through mud, lift legs over high tree trunks, duck under spiky plants and occasionally crawl.

Just as you feel there will be no end to it, you find yourself at the summit, which is a lovely, grassy clearing with enough space for 8 or more tents. The beirut does not have its panels attached – two pieces are lying nearby which were perhaps blown off by strong winds. There are some nice pitcher plants here and if you are lucky you can just about look down to lower hills to the west from inside the beirut frame and perhaps even be treated to a sunset.

As almost all hikers require one night camping, it really depends on how early you start on Day 1 as to whether you can reach the summit the same day or not and thus where you might camp. The summit gets chilly and has no water source but you may get a decent view.

Note you can also do a multi-day traverse known as Trans Batu (or sometimes Trans Spencer Chapman), which combines Batu Putih with Gunung Kak (1,848m – not to be confused with Batu Kak) and Gunung Bah Gading (1,620m) usually accessed south of Tapah via Bidor. 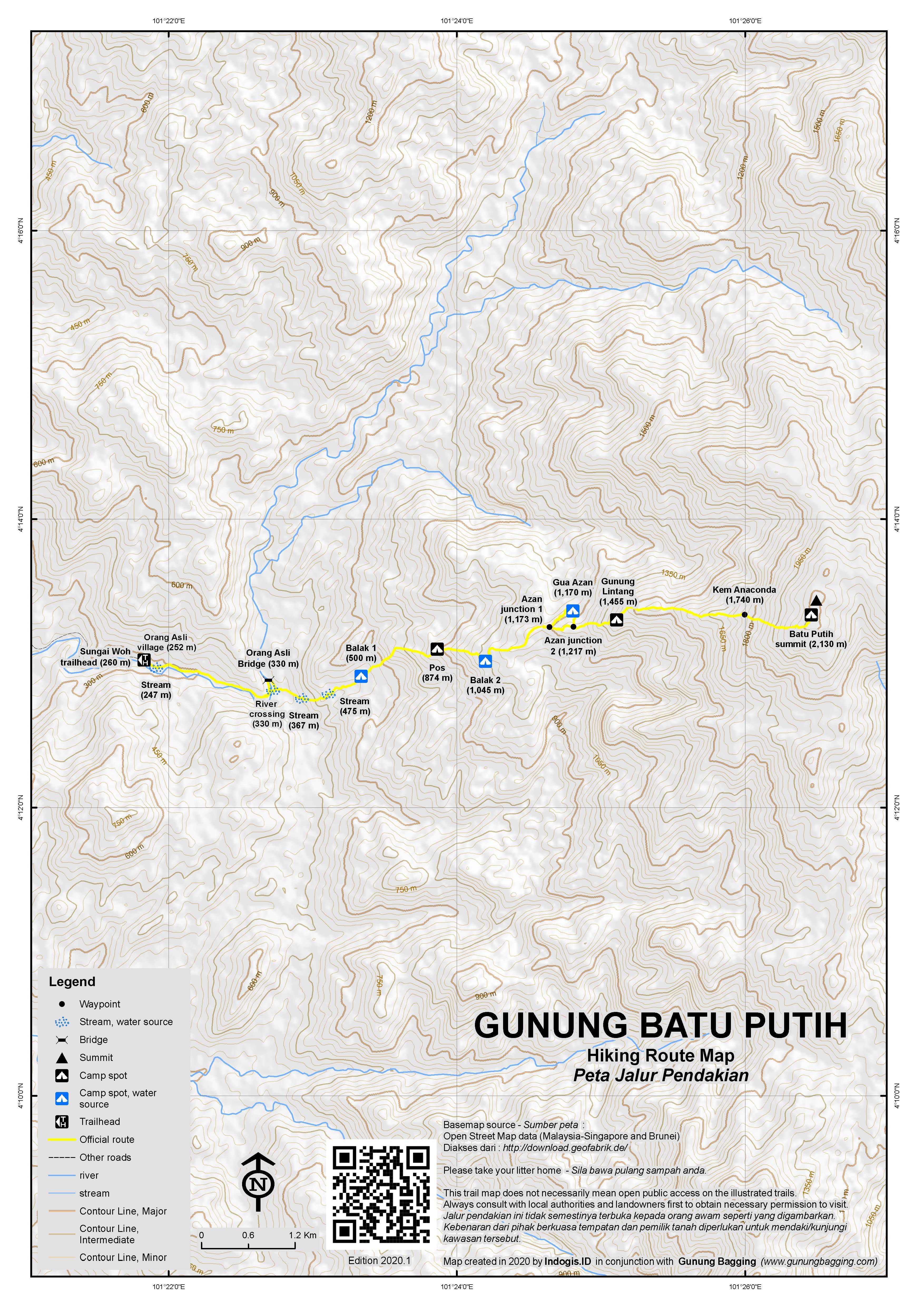