This infrequently climbed mountain can be climbed from several places. By far the best route for the summit – known locally as Karantenan – starts at the small village of Tembong (929m) which lies to the north of the peak, a few kilometres south of Panjalu and Situ Lengkong lake. Ask around in the friendly village and they will be able to find you a guide to take you to the top for a very reasonable fee. If you aren’t Indonesian they will definitely be surprised to see you!

Regular hikers can be at the summit in just over two hours, but there are couple of places you could go wrong near the beginning. Follow the cobbled track leading up the hillside and make sure you take a left turn at 1,000m rather than carrying on up the hillside and into long grass. The trail leads through pine woodland and the usual farm plantation but in clear weather conditions there are some excellent views of Ciremai to the north. There is a short section of undergrowth before you see a log hut above you to your right. Just beyond this hut, views are even more impressive, not just Ciremai but also smaller Tampomas to the north-west.

The trail enters the forest at 1,265m and passes several regional boundary markers (DB8 at 1,285m, DB10 at 1,314m and DB12 at 1,360m). At 1,390m there are some large rocks on the trail and an obvious spot where occasional local hikers spend the night. Best not camp alone as there are leopards in the mountains here and the trails can become very confusing if you take a wrong turn.

The final 30 minutes of hiking to the summit is steeper and there are few views due to the density of the forest. Near the top are a couple of water pools and a small upright stone (supposedly an ancient grave) and the very highest point is a grassy area just above the water pools. This, the highest of the Sawal range’s peaks at 1,764m, is known locally as Karantenan.

You may be able to glance north towards more shapely yet smaller peaks in the Sawal mountain range such as the more commonly climbed Gunung Bongkok (1,429m – spelt ‘Bangkok’ on the Bakosurtanal map) near Tasikmalaya.

The mountain can also be climbed from Tabraya (‘Kertabaya’ on Bako maps) just 1km to the west of Tembong. From here, plantation tracks lead quickly into the dense forest. There are numerous ‘summits’ of a very similar height (1,739m and 1,727m spot heights on the Bako map but with no names) stretching along a crescent-shaped and enjoyably narrow ridge for over two kilometres but getting to the highest point is very tricky from here due to the complexity of the layout of the mountain ridges. The Tembong approach is definitely the one to take for the summit.

About 20 kilometres north-west of Gunung Sawal is another range with a similar height, equally obscure, known as Gunung Cakrabuana. According to the Bakosurtanal map, the highest peak is 1,732m (known as Puncak Sanghyang Wenang to locals), which gives the mountain a prominence of approximately 950 metres, so not that far off Ribu-status! Apparently there are no water sources on the main trails and quite a few leeches! It can be hiked from Bunar and Pangkalan (Pagerageung) on the west side of the highest ridge, Cakrawati, Lemah Putih on the north-east side, or from Kebun Teh Cipasung Lemahsugih (Cipasung Lemahsugih Tea Plantation) on the east side. The Pangkalan and Cipasung routes meet on the ridge at what is known as Puncak Kancana about two kilometres south-east of the true summit. From here, follow the main ridge from Kancana to the true peak. 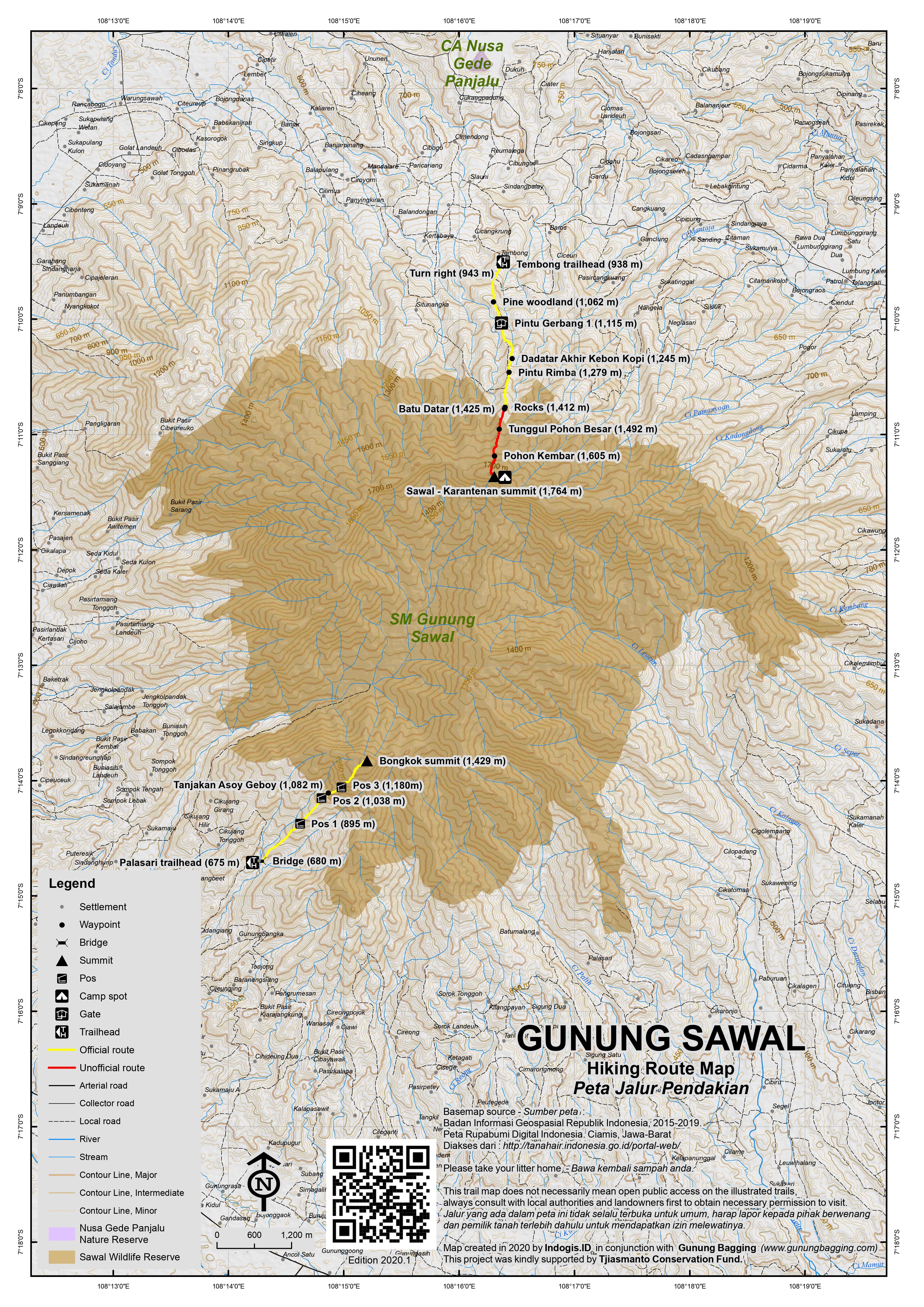 Sawal or Shawwal is the tenth month of the Arabic-Islamic calendar. It is the month after the fasting month of Ramadhan, so it opens with the festivities and celebration of Idul Fitri that mark the end of the Fast. It is possible that Gunung Sawal may have had an older name that reflected Hindu or pagan culture, and this name was replaced by the more positive, celebratory Islamic name “Sawal” when the people of the surrounding region converted to Islam. Compare Gunung Slamet. (George Quinn, 2011)