This spectacular volcano is a ‘husband and wife couple’ comprised of Lewotobi Perempuan (‘female’, 1703 metres) and Lewotobi Laki-laki (‘male’, 1584 metres). The peaks are often active – most eruptions have been from the Laki-laki vent, most recently in 2003, but seismic activity and minor volcanic emissions are common from both.

There are several possible starting points for the climb; the best-known is from the Vulcanology Centre at Desa Bawalatang (344m). Bawalatang is about a 20 minute from the main Trans-Flores road, between Maumere and Larantuka, at Boru. There is very little accommodation in the area so most hikers stay in Maumere or Larantuka, or else sleep on the floor at a local village house. Whatever you do, this hike is time-consuming, and so you need to set off as early as you can – by sunrise at least.

A guide is essential to negotiate the tracks through the plantations on the lower slopes and, thereafter, through the forest where the track is not well defined (due to the few people who climb these peaks). You will have no trouble finding a guide in Bawalatang – ask at the Vulcanology Centre. Despite how well-known these volcanos are, they are only climbed a handful of times each year, besides hunters seeking deer and pigs.

After passing through the cocoa plantations, you will enter forest where the Gosong kaki-merah, Red Footed Scrub Fowl, Megapodius reinwardt, make their nests. The locals have their own name for the Scrub Fowl but, mistakenly, use the word ‘kasawari’ (cassowary) to identify the bird when speaking Indonesian.

After some time, you will reach a forest ridge where the trail is a little more well-defined. Eventually, at about 1,053m, you will reach a rocky gully (where the guides like to take a rest). Just after this point, the track divides – Lewotobi Perempuan to the right across the gully and Lewotobi Laki-laki up the gully.

PEREMPUAN: Cross the rocky gully and enter grassy upland meadows of scattered eucalyptus trees. The path here is faint and you drop down in one or two places before climbing up again. After an hour or so, you will reach the col (1,228m) between Laki-laki and Perempuan marked by a large cement block.

To reach the Perempuan crater, simply work your way from the col and then take a right and begin the ascent up ancient lava flows and boulders. In this area you should spot one or two volcanic activity sensors that the folk back down at the office in Bawalatang use to monitor the volcano.

After 45 minutes or so of steep clambering up rocks, you will be rewarded with views over Laki-laki and Ili Wukoh, a mysterious forest peak with a triangular top that nobody seems to know much about. Eventually you will reach the bare rock of Perempuan’s outer rim. Follow this to the right for 20 minutes after which you will reach the inner rim of the impressive main crater itself inside of which is a lava dome, yellowish in places due to the sulphur.

The true summit of Perempuan lies some 500 metres beyond the rim to the south, but only the confident scrambler should attempt what might be rather dangerous. The rim is steep, crumbly and slippery so do take extra care. It should take you about one and a half hours up to the rim from the col (cement block). To descend the same way should be considerably faster.

LAKI LAKI: At the rocky gully, ‘where the guides like to take a rest’, proceed directly up the gully climbing up rocks within the gully. Towards the top of the gully, the rocks become increasingly loose and fragile and difficult to climb. Eventually, you will emerge onto a steep, friable slope of loose scree that takes you direct to the summit of Laki-laki – not fun but doable with courage and patience.

The view from the summit of Laki-laki into its crater (when dormant) is mind-boggling – a cavernous hole, about 15 metres wide, of unknown depth descending into the bowels of the earth. One can only imagine what emits from this enormous cavity when the mountain does erupt periodically. Indeed, our guides informed that your boots would melt if you climb Laki-laki all the way to the top! As of September 2014, and the mountain dormant, our boots were fine on the summit of Laki-laki!

A descent from Laki-laki via the rocky gully would be difficult and dangerous due to its loose rubble. Instead, we scrambled down the scree slope towards the col between Perempuan and Laki-laki. Eventually, we entered Eucalypt scrub and ‘bushwhacked’ our way down until meeting the track between the ‘rocky gully’ and the cement block on the col – and thereafter returned to the Vulcanology Centre through the forest and plantations.

To climb both Perempuan and Laki-laki in one day would be very demanding and certainly require a start or end in the dark, so most people choose to just one. Laki-laki may be shorter but the summit of Perempuan certainly offers the more spectacular views. 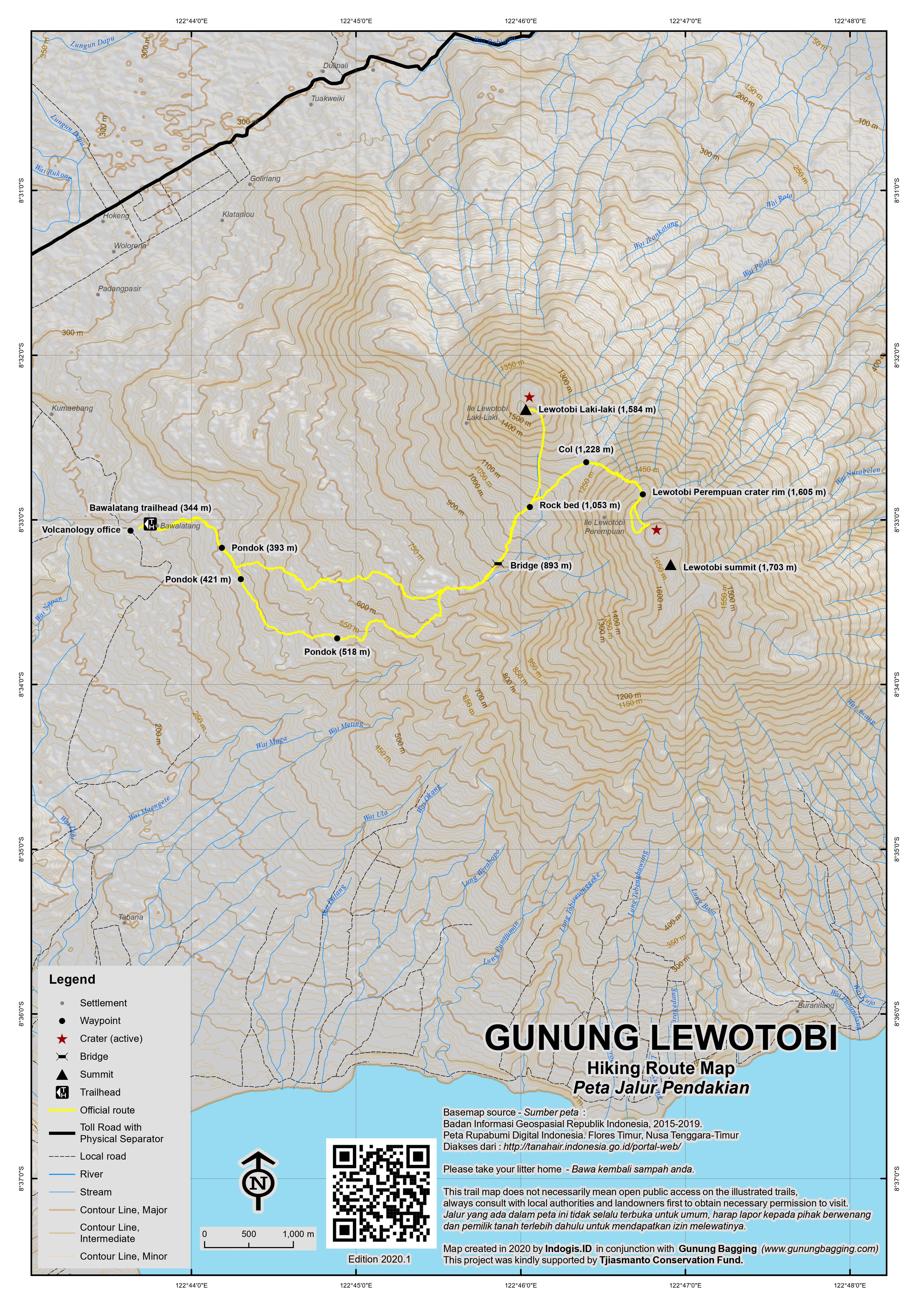 Village of Tamarind. Named after a local village where tamarind grows – Lewo (village) and Tobi (tamarind).