Western Hill is the highest point of the island of Penang (Pulau Pinang). Many visitors visit nearby Penang Hill, which was once a favourite colonial retreat, is easily accessible and features temples, restaurants, souvenir stalls, an owl museum and a pitcher plant garden. There is actually a funicular railway which starts at Air Itam and takes you almost all of the way to the top. The highest point of the Penang Hill area is Bukit Bendera (‘flag / flagstaff hill’) at around 735m.

Western Hill is about 4 kilometres along Summit Road but sees almost no visitors, however, because since the 1960s the summit has a private military radar station with radar domes on it. You can get close to it but ‘bagging’ the summit is not currently possible. However, an exploration of the island’s highest forests is a great day out.

In addition to approaching from the easy, touristy Penang Hill side, there is another route up (or down) which forms the toughest trek on the island and is a real hike. It starts in the north-west of the island at Taman Rimba (Forest Park) at Teluk Bahang (the dam) – or you can use one of the alternative nearby starting points detailed below. From Teluk Bahang to Penang Hill (Bukit Bendera) is over 11km in total and the trail is well marked with signs including distances to and from either end at each simple ‘Station’. It is therefore a significant hike, though, so set out early and allow 6-8 hours if you are doing a ‘traverse’. This trail leads up Bukit Laksamana (‘Admiral Hill’) which at around 750m is the second-highest significant peak on the island, and the views to the coast are pleasant.

From the Taman Rimba entrance (20m above sea level) which is easily seen from the main road, the trail leads through a car park and complex including a camping area, over a mini bridge and then up some cement steps. You then pass by Station 1 (53m), Station 3 (100m), Simpang/ Junction 8 (165m) after which the trail heads up to the left via some large rocks (280m) before reaching Simpang/ Junction 12 (375m) which is a very important junction where you meet the alternative trail up from Batu Ferringhi (see below). It should have taken you just over one hour to reach this point.

From Simpang 12, the trail basically follows a ridge up to the top of Bukit Laksamana. Much of this time you remain in the forest, but at Rain Gauge 14 (435m) the vegetation is much lower and you may be lucky to see Gunung Jerai in the distance. Beyond this point, the trail leads past Station 7 (450m) and Rain Gauge 13 (522m) and then the ridge becomes quite narrow and progressively steeper. There are ropes to help those in need.

After a total of 2.5 to 3 hours you should have reached Bukit Laksamana, which has a sign with 805m on it but based on GPS readings is not likely to be higher than around 750m. This is probably the best part of the entire hike, with views to Gunung Jerai, Teluk Bahang Reservoir, and the mysterious dome that is at the very top of Western Hill, some 1.6km away (as the crow flies). There are also a small number of pitcher plants in this area.

The true highest point of Bukit Laksamana lies a little further down a trail on the right beyond a small area that is obviously sometimes used for camping. This trail leads directly down to the Tropical Fruit Farm and this is a very good alternative route up (see below).

From Bukit Laksamana to Western Hill and Penang Hill, you need to continue straight (left not right) and head down into the valley that separates Bukit Laksamana from Western Hill. Surprisingly, although the trail initially leads steeply down, it then ascends again to another Rain Gauge (number 12, 748m) before properly descending into the valley. This descent is steep and there are roped sections over slippery boulders via Station 5 (685m). You may encounter a small number of leeches here.

After less than one hour from Laksamana, the col between it and Western Hill is reached. It is marked by yet another Rain Gauge (number 11, 540m). This is very approximately the half-way point on the hike. After the trail starts leading up again, more gently this time, it soon passes Station 4 (550m) and then finally Station 2 (775m). At this point is a rusty -no entry’ sign where there used to be a permissive path skirting under the base of Western Hill. This is now closed and although the large dome at the top of Western Hill (and therefore the true high-point of Pulau Pinang) is clearly visible just 200 metres away, you have to follow the trail sharply right as it detours down into a tiny valley with a small stream in it (720m).

This area seems prone to minor landslides so take real care on the final ascent from the stream up to the meeting point with the wide access road to Western Hill. This junction is Station 1 (755m). From here it feels like you are back in civilisation but it is still over 4 kilometres to the main area of shops and railway station on Penang Hill. For those wishing to get as close to the top of Western Hill as possible, take a left and follow the road for just 5 minutes until you reach the severely-worded warning signs (800m).

Back to Penang Hill along the access road should not take much more than an hour or 90 minutes, and you will soon be back in the land of restaurants and tourists on golf buggies! To avoid the queues waiting for the train back down, you might consider trekking down the Moniot Trail, the junction of which (700m) is clearly signposted well before the popular areas of Penang Hill.

If you do continue to the station and shops at Penang Hill and are keen to seek out the highest top there (Bukit Bendera), it would appear that in 2018 the true high point of Penang Hill is now covered by a large circular forest walkway known as ‘The Curtis Crest Tree Top Walk’ in The Habitat complex. Views from the top are probably great in good weather and it is open for sunset. Prior to when this was opened in 2017, the high-point was just a small clearing with a little communications mast on it.

To get back down in the direct of George Town, simply join the queues for a ticket on the funicular railway back down to Air Itam. Note that queues are especially long during weekends but if necessary you can pay extra (RM45) for a ‘Fastlane’ ticket to jump the queues.

Alternative starting points for the traverse via Bukit Laksamana:

The trail begins at Chin Farm opposite Bayview Beach Hotel. Allow about 90 minutes to trek via Rain Gauge 15 (372m) and Junction 13 (420m) and reach the junction (Simpang 12) with the Taman Rimba trail as detailed above. Note there are aqueducts from the colonial era near the starting point which many local hikers regard as worth visiting.

Several kilometres south of Taman Rimba is the closest access point to Bukit Laksamana. The great advantage of this trailhead is that it is at about 200m above sea level whereas the others are close to zero. The disadvantages are that it takes longer to get to from most parts of the island and is less well-used and therefore more likely to be overgrown. Look for a road sign reading FT006/043/59 and follow the cement path before following the water pipes up the hillside via Rain Gauges 23 and 22. From this starting point, most hikers can be at the top of Bukit Laksamana in about 2 hours.

From The Botanical Gardens

A trail in from the east at the Botanical Gardens is yet another alternative. Starting low down at around 35 metres above sea level, the trail leads over a bridge (250m), Rain Gauge 3 (425m), Rain Gauge 4 (490m) before reaching a junction (576m) with another route up from slightly further north at Tanjung Bungah (30m). Continuing onwards up the hill, another important junction is reached at Rain Gauge 9 (635m). A left here leads eventually round to Penang Hill. A right here leads to the northern end of Western Hill and a separate set of no entry signs.

This northern approach can be combined with two more trails up from Batu Ferringhi. 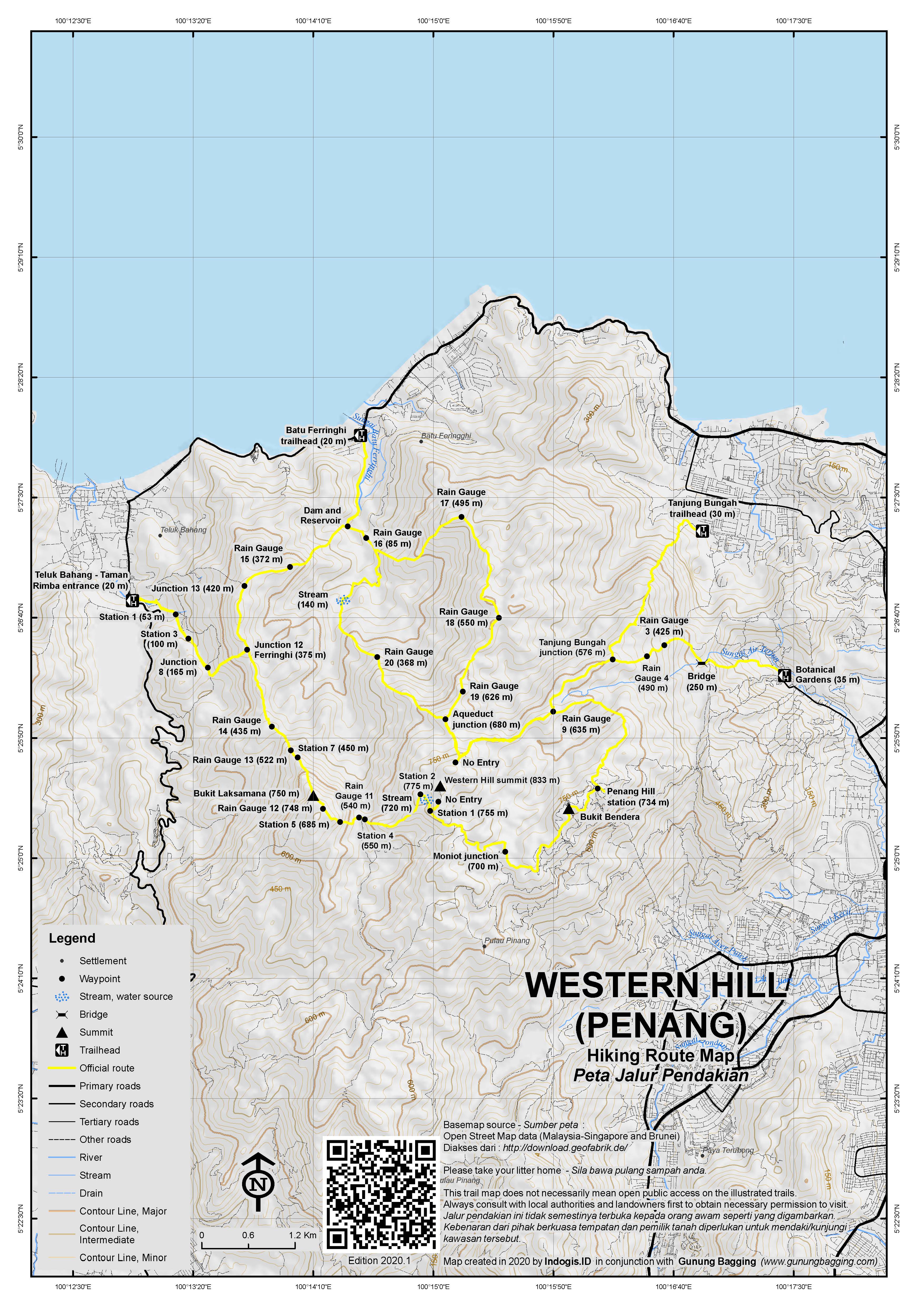