Gunung Tompotika is the highest mountain in the Tompotika Peninsula – a remote part of Central Sulawesi. It gives its name to the Luwuk-based Universitas Tompotika (UNTIKA) and is also right in the middle of an area of incredible biodiversity which is looked after by the excellent Alliance for Tompotika Conservation (Aliansi Konservasi Tompotika) known locally as AlTo. Although not many hikers climb Tompotika at the moment, it has tremendous potential given its reasonable proximity to Luwuk which has regular flights from Makassar and elsewhere in Sulawesi.

As is the case with many ‘small’ mountains, the trekking can be energy sapping because the trail starts at around 100 metres above sea level and because plant growth is so vigorous that in certain places there are plenty of obstacles in the form of spiky vines and low branches over the trail. A guide who can bring a machete to clear the trail is greatly recommended as there are only a handful of expeditions to its higher slopes each year.

It takes just under 4 hours to get from Luwuk to the trailhead, and what a scenic road it is. It snakes its way over to the north coast and through a large area that seems to be almost uninhabited. Gunung Tompotika itself forms a fairly sedate background to latter portions of the journey and it looks like it might be an ‘easy one’. The road quality varies from excellent to somewhat poor. You eventually reach Desa Tikupon, Toiba, Longkoga, and finally Bualemo before heading inland on a rougher track up to Tanah Merah.

The trail starts on the left side of the main street in Tanah Merah (‘red land’, 132m above sea level), an aptly-named village of friendly locals living on deep red soil. Pak Dolof, originally from the island of Sumba in Nusa Tenggara Timur, is a lovely man with lots of good advice and information about the area and it is recommended that you hire local guides from Tanah Merah via him – call Anim in advance on 0852 4149 2592 to arrange this. From the village there are good views of the mountain to the south.

There are several ‘puncaks’ up on the highest ridges of the mountain range, and to visit any of them you will really need at least one night’s camping. Given the rich variety of wildlife (especially birds and insects) this is an absolute joy as the sounds of nature here are rarely interrupted by the sound of motorbikes and other ‘noise from civilization’. You have a very good chance of spotting hornbills at dawn as they often flap over the camp areas early in the morning.

It is advisable to allow 10-12 hours in total for the ascent and 6-8 for the descent, assuming you don’t go beyond the highest peak to the lesser peak which lies a further hour along the trail (and which local hikers seem to regard as the final destination here). The very shortest trek would entail a very early start from Luwuk, so that you can make it to Pintu Angin (the best camping spot) before dusk. Very early on the second morning, you can then continue up to the highest peak (currently unmarked) before returning to camp, packing up and heading back down to Tanah Merah to meet your driver. A more leisurely and sensible approach would be to spend the first night at either Air Kedua or Camp Damar/Air Ketiga before continuing to Pintu Angin (‘door to the wind’) on the second day to set up camp for the second night (and for very fit and motivated hikers, reaching the summit and returning to camp again). The following description assumes the latter approach.

From Tanah Merah, the trail leads southwards through farm fields with the mountain clearly visible in the distance. It looks pretty straightforward and the summit lies only around 7km in a straight line from the village. However, appearances can often be deceptive! The initial part of the trail follows a water pipe and at a v-junction you can actually turn either left or right, but left is most recommended. In less than an hour you will cross a small river (Air Kesatu – 1st water -154m) and after about 90 minutes total will have reached Tempat Athena / Air Kedua (‘second water’ at 306m) where there is enough space for 2 or 3 tents. The river here is also great for having a bathe so it’s a brilliant place to camp if you started late in the day. Tempat Athena was named by Pak Dolof and Tanah Merah villagers after an injured maelo bird named Athena who was snared here in 2006 and is buried under a large rock here.

From Tempat Athena, the trail begins to head up the mountainside and becomes considerably steeper. The next major point on the trail is Camp Damar (678m) which is also known as Air Ketiga (‘third water’) as there is a river just a few metres away. This is the last easy place to find water. The main trail continues steeply to a sign for Pintu Angin (820m) where the direction of travel changes to westwards. Alas, Pintu Angin itself is still a fair way off, but soon you will have emerged from the forest and will have a good view now of the north-east coast of the Tompotika peninsula. Between here and Pintu Angin itself (1,222m) you will notice a considerable change in the plant species – those you might expect on a mountain considerably higher than Tompotika – indeed, it feels much higher up than it really is and there is a deep red lichen on tree branches often seen on higher mountans elsewhere in Indonesia.

Pintu Angin is the flattest and largest camping spot on the whole trail and is thoroughly recommended as a place to spend the night. You are within a short walk of what are great views in clear weather. Allow up to 6 hours to get here from Tempat Athena or about 4 hours from Camp Damar / Air Ketiga. The next major landmark is a ridge of a couple of hundred metres known as Puncak Batu (1270m). Large rocks cover this ridge and it is by far the most photogenic part of the trail and probably brilliant at dawn and dusk. Do take real care here though, especially with large backpacks, as there are many hidden holes between the rocks and some tricky sections where you need to clamber across large, slippery logs.

After the rocky section ends, the trails re-enters forest and onto a fairly narrow ridge. There are no further wide panoramas of distant hills but look out for pitcher plants just beside the trail (1375m – Nepenthes Maxima, thanks to Alastair Robinson for identifying them). Soon after comes the steepest section of trail which is easier to climb up than to climb down. You need to hold onto tree roots and avoid loose mud. A while later comes another ‘peak’ known as Puncak Seasea (1527m, Bungkutnyo Seasea 1,558m on the Bakosurtanal map) where there are a couple of MAPALA signs and height readings. Local hikers were right to consider this area of investigation as a peak in its own right but the true highest part of the entire mountain is another 10 minutes (or 200 metres west) further along the trail. It is unmarked, overgrown and offers no views! It is, however, the true summit of the mountain, so baggers take note! Allow about 2 hours to get here from Pintu Angin.

Signs at Puncak Seasea suggest that Puncak Tompotika is another hour along the trail (so roughly 50 minutes beyond the highest, unmarked point of the range). This final slog is pretty tough, with vines and fallen trees blocking the trail and requiring you to take off you backpack to crawl under obstacles before putting it back on again. It’s tiring work, and the trail seems to lead more down than up. After one hour from Seasea (or 50 minutes from the actual highest point of the range) you will reach what locals call Puncak Tompotika (1494m, Bungkutnyo Tompotika 1,530m on the Bako map). It’s nearly 50 metres lower than the true highest point, but is adorned with a flag wrapped round a tree and space for a couple of tents. There are no views here and adding this extra hour each way to your trek is not especially advised as you will have already gone past the true high point and this spot offer no views nor is it anywhere nearly as good for camping as Pintu Angin.

It takes roughly 6-8 hours to descend from the highest peak to Tanah Merah, and that’s just another reason why camping at Pintu Angin makes more sense than lugging your heavy equipment higher up the mountain and past the highest point and on for a further hour to so-called ‘Puncak Camp Tompotika’. If you do end up spending a night either here or at Puncak Seasea, note that water is available, but given the distance and descent required from each of these places it should only be considered in an emergency situation as it will require more effort than simply bringing up another big bottle with you from Camp Damar.

For those wishing to visit a less well-known part of Indonesia, and keen birdwatchers, this is a great choice. Allow 4 days minimum, assuming travelling to/from elsewhere in Indonesia. For further details on the area, see the excellent Alliance website… http://www.tompotika.org

Bagging information by Dan Quinn (February 2017) Thanks to Jonathan Wilshere and Ayu and Stephen for putting me up in Malang this month. Thanks also to Marcy, Anim, Pak Dolof, Syahrul and Ilham. 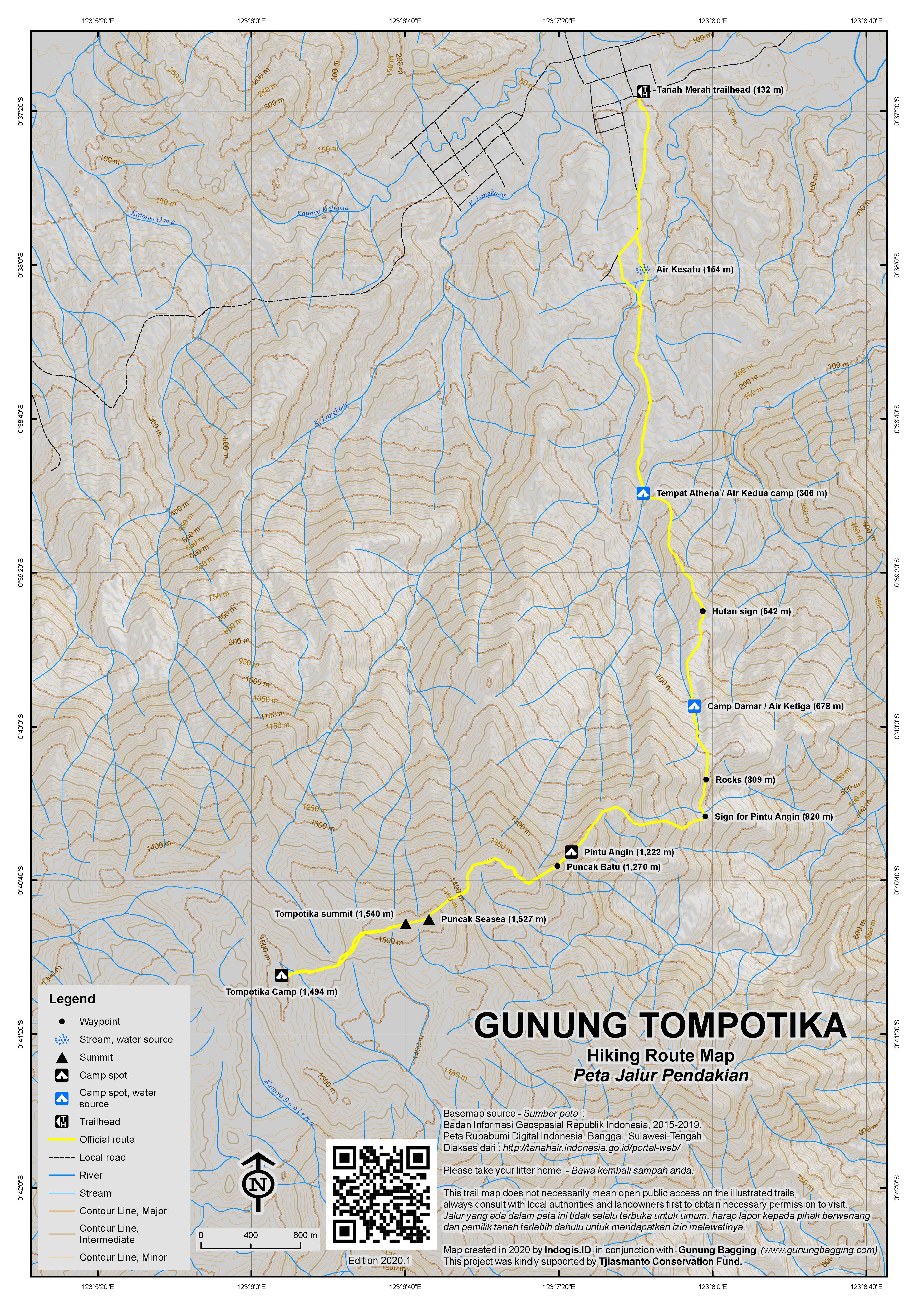