Gunung Sinabung is a beautiful conical mountain, and due to its close proximity to Medan is one of the most popular hikes in Sumatra. August 29th 2010 saw the first eruption of Sinabung since 1600 which led to thousands of local people being evacuated from their homes. As of December 2010, the peak was open for hiking again. However, the volcano started erupting again in September 2013 forcing local people to evacuate once again. At the time of writing (December 2013) the volcano remains dangerously active and it is not known when it will be safe to climb again.

Brastagi is a nice place to hang out for a couple of days and has cool weather because it’s 1,500 metres above sea level. One thing you must do is take a walk up to Gundaling hill which only takes 20 minutes or 5 minutes in an angkot. Aside from the touristy stalls and the constant flow of local people wanting to take a picture with you this hill offers great views of Sinabung and the other popular mountain nearby called Sibayak. It’s a great place to watch the sunset as the sun drops behind Sinabung. There’s plenty of accommodation in Brastagi for all budgets and your best bet would be to ask your hotel to organize a guide for you. Be wary of guides trying to rip you off, particularly on the transport side.

The route for Sinabung starts at Lake Lau Kawar (1,460 m) which is just under an hour’s drive from Brastagi and is north of the volcano. There’s not really a lot of action around Lake Kawar, just a few farms, so going to Kawar and looking for a guide would be risky if you are on a short time frame. If you climb during the day then it is possible to get an angkot to Lake Kawar but if you do the usual night climb to get to the top for sunrise then you will have to organize your own transport from Brastagi. Hopefully your guide will organize this for you.

The climb can be divided into three parts. The first hour of the climb is through dense jungle which is loaded with bugs. At night all the moths will swarm towards your face because of the light on your head torch. Better to keep your mouth closed or you will be choking on them. There are tree species name tags (in Latin) and shelter signs but no shelters. The trail meets a stream at around 2,129m. As you get higher the bugs go away and the track gets steeper. This part of the hike is quite muddy and expect the odd leech. Try not to step on the frogs. As the forest recedes, there is a small monument to a lost hiker (at 2,198m) after which the track becomes a rocky gully and for the last hour of the hike you will feel more like a rock climber. But this is the fun part! Then you will arrive directly at the summit where a huge expanse of craters will lie in front of you. In good weather you can see stunning views of Lake Toba, Leuser National Park, Brastagi and Gunung Sibayak. It is worth it to explore the crater area as there are a lot of fumaroles and a new gash in the ground near the impressive jagged rock that was formed after the recent eruption. There is a constant plume of smoke coming from the gash and it would be unwise to get too close to this. The true peak has a small cement monument on it, but it is worth visiting the second highest peak (just 5 or 10 metres lower) for the best views of the new crater and the plume of smoke.

The clouds will likely roll in early so best to time your climb for sunrise. I would allow 4 1/2 hours to climb and 3 back down but fit climbers will easily reach the top in under 4 hours. Do remember to take a jacket with you as it can get very chilly at the top while you’re waiting for the sun to come up. Once you arrive back down at Lake Kawar it is best to walk the half hour back to the main road if you don’t already have transport arranged. There you will find angkots to take you back to Brastagi.

There is an alternative route from the northeast at Sigarang Garang (1,340m) but it remains less popular. 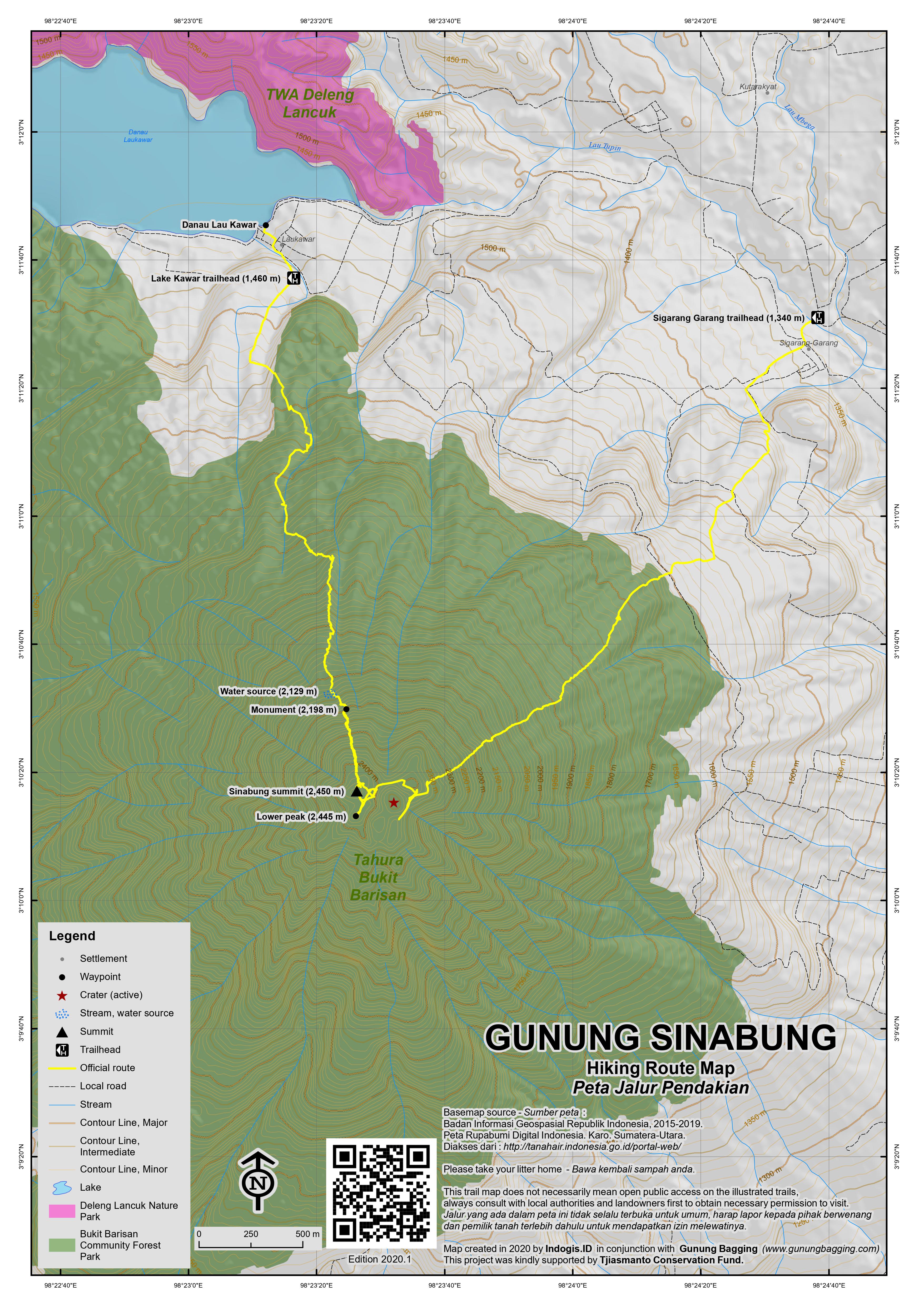