This 844m high island lies in the Sunda Strait just 12km north of the Krakatau islands and is usually accessed by boat from Carita, Banten or Canti near Kalianda, Lampung. It is actually much cheaper and a shorter crossing from Sumatra, and a hike to the highpoint of the island can just about be done as a regular weekend trip from Jakarta. Just over 2,000 people live on the island – an interesting mixture of ethnic groups: Javanese, Batak, Ambonese, Sundanese  and others – but it’s a really relaxing environment and quite popular with visitors from the Lampung mainland.

The tiny Canti pier is about 5km south of Kalianda town, beneath the steep slopes of Gunung Rajabasa. It’s an incredibly laid-back place and there is just one public ferry serving Sebesi per day. The crossing takes 90 minutes and the ferry leaves Sebesi at 7am and returns from Canti at 1pm. It usually calls at Sebuku island enroute – an large and wild island which looks uninhabited but is actually home to a not insignificant population. As the ferry nears Sebesi island, you will see a further island in the distance – that is Rakata, the highest remnants of the original Krakatau volcano.

Once the ferry has docked at Sebesi pier, it is just a two-minute walk to Pak Hayun’s Villa Pondok Sebesi Indah – the basic accommodation on the island. The rooms are literally a stone’s throw from the beach, and if you walk for ten minutes in either direction you will find some delightful and empty beaches to explore. Pak Hayun can arrange anything you need – be it a trip to the Krakatau islands (a further 90 minutes) or a hike to the summit of Sebesi island.

The best starting point for the hike is Kampung Segenom from where it takes just under 3 hours to reach the peak. If walking from the pier itself, add an extra 30-40 minutes each way, but you should be able to arrange an ojek with very little difficulty. Because the starting point is just a handful of metres above sea level, this can be a horrendously hot hike. The best solution is to set off before dawn and descend in the early morning. The gentle trail leads up through coffee plantations and is very well-defined as it leads all the way to Kampung Danau – a small collection of village huts at 550m. Just prior to this village is a small stream – not the purest looking water but certainly a good place to have a splash on your descent! Do take care in this area as there are a large number of trails and it is easy to become lost even with a guide – especially in the dark!

After Kampung Danau, the trail gets a lot steeper and – after rain – a lot muddier. Gloves and long trousers are essential to avoid getting cut on thorns. Eventually you will have reached the top of the island. There are a couple of small openings in the forest – the true high point is crowned with a cement pillar presumably dating back to Dutch days. In February 2011, this actually had to be uncovered so it may have been hidden for a decade or more. It has a metal sign with ‘SEC: TRIANG: No 109’ written on it.

Despite being the highest peak in the Sunda Straits, there is not much of a view from the top due to the height of the trees. What would be one of the finest viewpoints for Krakatau is unfortunately too densely covered with vegetation. If the weather is fine, you might want to consider climbing a tree to see if you can catch a glimpse of the legendary volcano. It is quite amazing to think how affected this island would have been by the 1883 eruption – due to it’s proximity to Krakatau it was not-surprisingly totally devastated. Indeed, it’s hard to find a tree on the island that looks old enough to have survived the catastrophic events of 1883.

It takes about 2 hours to descent the same way and an extra 30 minutes back to the pier. On the way down there are some lovely views over to neighbouring Sebuku island. 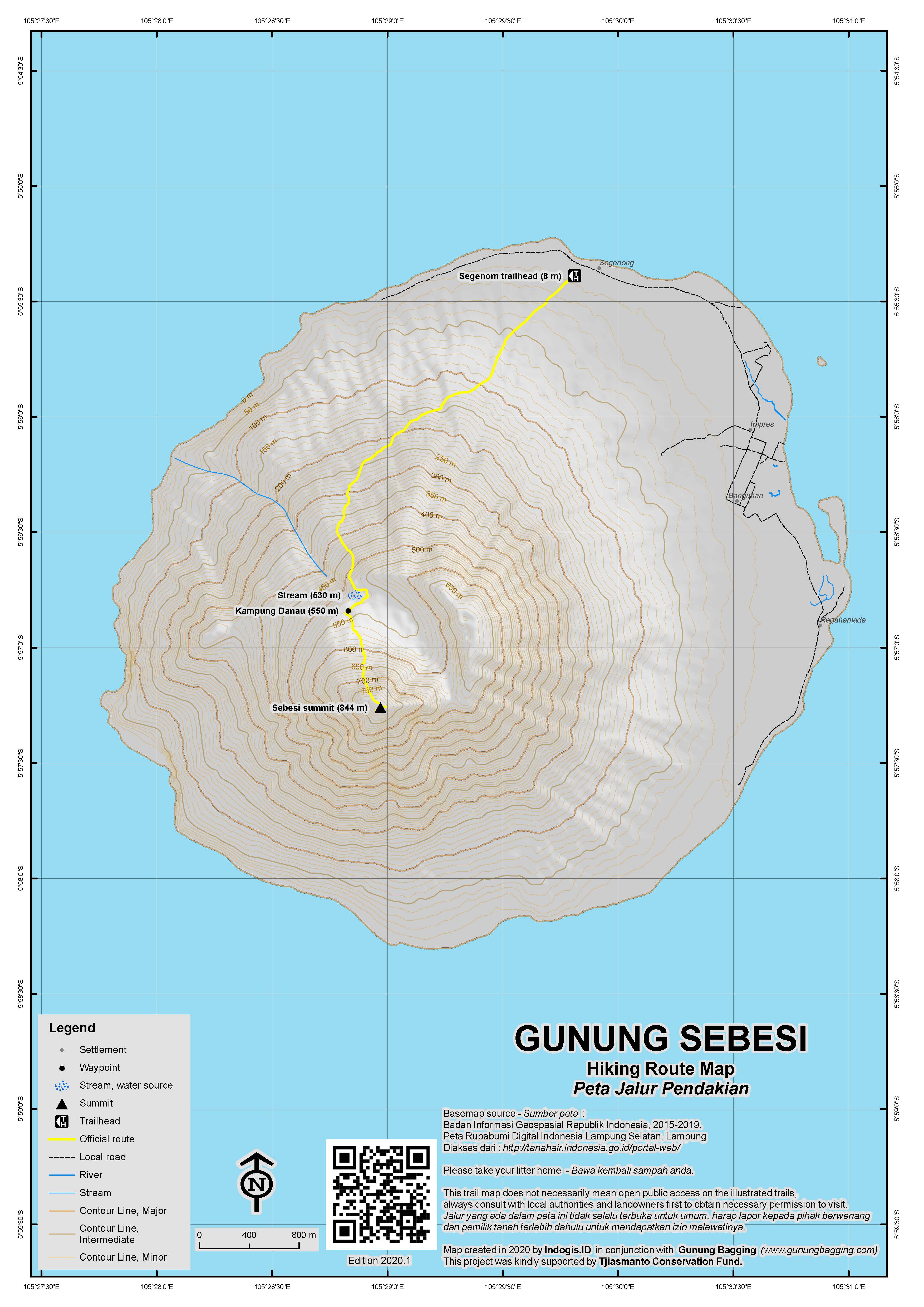 ‘Besi’ is Indonesian for ‘iron’. In English we have the saying ‘as hard as iron’, and it would appear that in Indonesian iron also refers to something of great strength. Residents say the island got its name because of its immovable and unbreakable nature. So, the island is ‘as hard as iron’. It certainly survived (relatively speaking) the volcanic eruption which totally destroyed neighbouring Krakatau in 1883.