Gunung Ringgit is one of the most striking peaks in Java with an attractive collection of cliff faces and steep jungle slopes. Despite its low height, it must be climbed from near sea level at the northern coast of Pasir Putih. The highest peak of the range has apparently never been climbed and would require ropes and advanced rock climbing skills. However, a decent trail leads up to one of the less-high tops which provides an excellent viewpoint over the rest of the range and to the nearby ocean.

Gunung Ringgit has two other well-known names; Gunung Putri (‘Princess Mountain) because, according to local people, the range looks like the face of a young woman when seen from the (east) Situbondo side.  It is also known as Gunung Agung to the many Muslim pilgrims who climb one-third of the way up the mountainside to a complex of graves where they pray for health and good fortune. The name ‘Agung’ is taken from the second-highest peak in the range.

The trail starts on the main north coast road at SD Klatakan Pecaron in the village of Pecaron (a few kilometres east of Pasir Putih and barely above sea level). The path is very clear and very wide all the way up to the Agung religious complex (315m), and follows a large water pipe all the way up the hillside. In less than an hour you will have reached the religious complex, the alleged resting place of an important, ancient Muslim nobleman from the Situbondo area, Raden Condro Kudumo. You will undoubtedly be welcomed into one of the buildings by Pak Haji (Pak Taufik) and offered some clove cigarettes and coffee. Tens, if not hundreds, of local people climb here on a daily basis and if you are non-Indonesian then expect to have lots of pleasant questions asked of you and many, many photographs taken! Also look out for the many monkeys that live around here and try to steal food from pilgrims.

Once Pak Haji has given his blessing and had a good chat with you he will let you onwards up the hillside towards the only accessible peak known as Gunung Suunan. There are some good views down to the the little Gunung Carron and the ocean just beyond the grave complex but be aware that there are no water sources beyond this point. You will soon reach a large flat area where hikers often rest for a while, having reached the beginning of the ridge (765m). Further up the trail are several steep, rocky sections with thin pieces of rope attached to them. One section even features a metal ladder to help you ascend what would be pretty difficult terrain otherwise. Take extra care here.

You will soon have reached a ridge where a few large rocks lie (‘Batu Ampar’, 936m). One is perfect for sitting on. The trail continues along the steep ridge and up several more challenging sections before culminating with a final roped section just below the top of Suunan (1,138m). There is a small cave and a grave at the top and views down over the steep cliffs are magnificent in fine weather. This is labelled Gunung Agung on the Bakosurtanal map with two peaks of 1,163m (west) and 1,156m (east) respectively.

There is no access further along westwards to the other peaks due to the steepness of the terrain and so the trail ends here. The highest peak (just 1,201m on the Bakosurtanal map) lies about 1.8 km away to the west and may be worth investigating from the Kukusan side to the southeast of the mountain.

Return the same way and have a leisurely chat with Pak Haji and the local pilgrims before wandering back down to the main road at Pecaron. 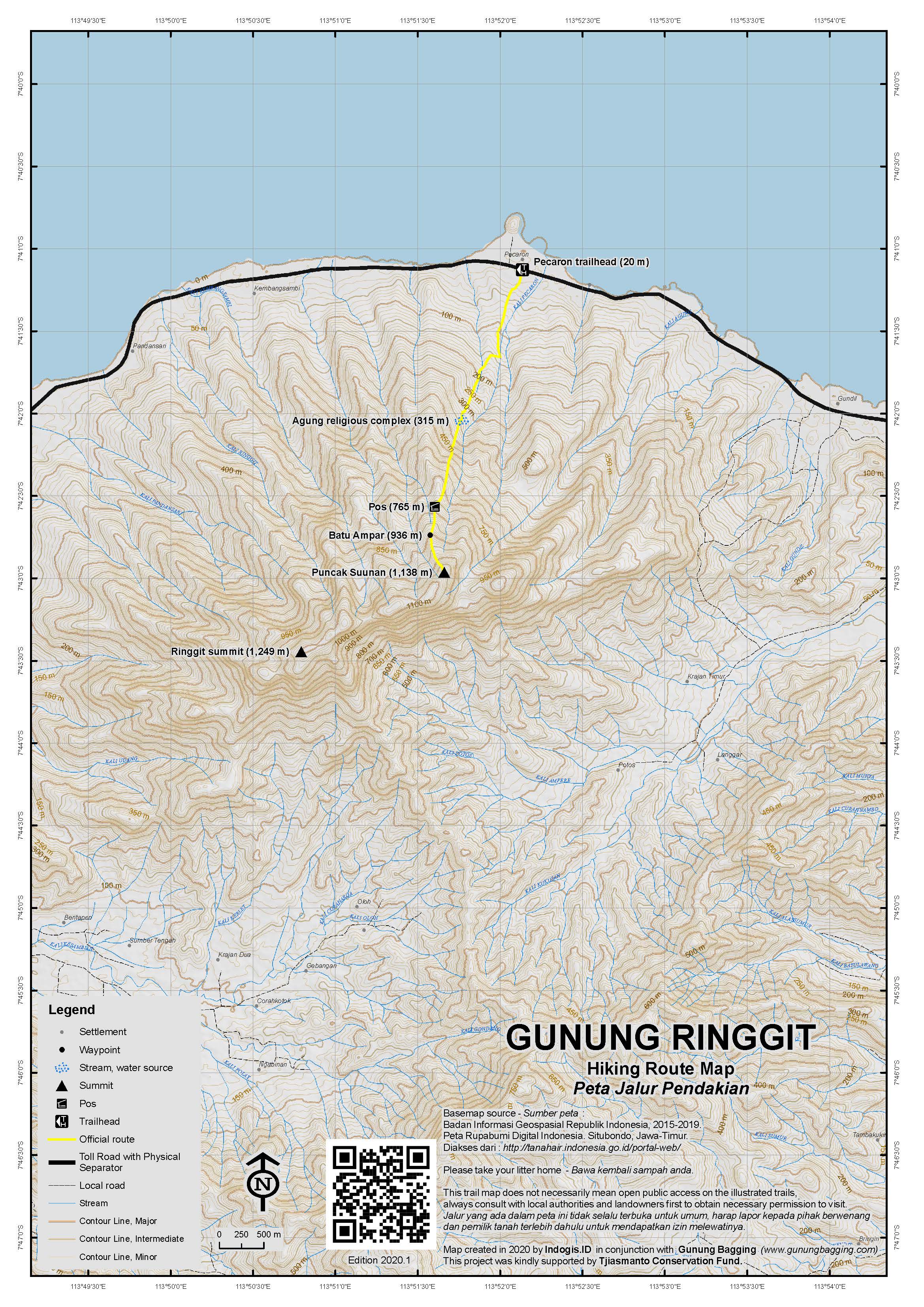