This Ribu is the second most prominent peak in Sulawesi (after Latimojong’s Rantemario). It was first climbed in 1840 by James Brooke, an Englishman who later became Raja of Sarawak. It must have been a major expedition to reach the summit ridge in those days but now it is a popular and frequently climbed mountain that could even theoretically be done as a long day hike.

The mountain range actually consists of two major mountains – Lompobatang (2,886m, also spelt with two ‘t’s) and the more northerly and slightly lower Bawakaraeng (2,840m). Because of the proximity of the mountains to the bustling city of Makassar both peaks are climbed by student hikers almost every weekend. Some of the really adventurous hikers actually climb both in one trip, although this requires a minimum of four days and usually five. According the local legends, Lompobatang has female characteristics and Bawakaraeng has male characteristics, the latter being more cruel than the former in terms of how many hikers have perished on its slopes.

There are two main access routes to the range. The southern approach which is used for Lompobatang starts from Lembang Bu’ne village near Malakaji to the southwest of the mountain. The other approach is from Lembanna near the popular hill resort town of Malino which lies to the north of the mountain and is used by hikers wishing to climb Bawakaraeng. Since Malino is only 2 hours from Makassar it is considerably more popular than Lompobatang but both mountains are fabulous in their own right and if you have sufficient time a traverse of the range would provide a truly memorable experience.

The starting points for both mountains are relatively high up yet both treks are substantial and involve some occasionally tricky terrain. It is rare – though not impossible – for hikers to climb and descend either mountain in a single day. For example, Lompobatang would require 11 or 12 hours from reasonably strong hikers for a return trip. The following is a report for Lompobatang, the higher mountain of the two – and therefore the Ribu.

To reach Malakaji from Makassar, there are now two options. In the past, it was standard to follow the main road south to Jeneponto near the south coast. This requires around 4 hours. From Jeneponto take a left turn onto a narrower road which twists and turns for 40km up through villages to the south west of the mountain. Finally you will reach Malakaji, which is the last place to buy supplies of any note.

However, in 2020, a shorter (just over 100km) and slightly faster rural route which at first follows the Jeneberang river inland and via Bungaya, Bontolempangan and Rappolemba. This route is windy but requires a little less time at around 3 and a half hours.

This hilly area of South Sulawesi is well-known for passion fruit (markisa). From Lembang Bu’ne, turn up Jalan Lompobattang which turns into a stone track for a further 3 or 4 km before reaching the basecamp (1,624m) which is a simple wooden village house, with a newer building next to it. It is not well signposted so best ask locals working in the coffee plantations. Most ordinary cars can manage this last section no problem but it is rather bumpy and steep so many motorcycle passengers will have to get out and walk in a couple of places.

From the basecamp, where there is enough space leave motorbikes and a couple of cars, follow the stony track up the hill for a couple of hundred metres before following a small path down to the left (1,660m) behind a village house through onion fields. The path leads to a couple of stone walls separating farm fields and these can be ascended easily. There are some arrows pointing the way, so you shouldn’t have much difficulty finding the way during daylight hours.

Soon you will have reached a sign by a river, which is Pos 1 (1,657m). This is the most reliable source of water before Pos 9 so fill your bottles here if you need to. From Pos 1 it takes about 30 minutes along a rather overgrown trail to Pos 2 (1,847m) which is by a small mountain stream. After Pos 2, there is another small stream crossing (1862m) as the trail enters dense forest and the views become much more limited.

It takes about 30 minutes to reach Pos 3 (2,018m) and a further 30 minutes to Pos 4 (2,251m) which is a nice opening large enough for 2 or 3 tents. If climbing at night, this is the first point at which you will see the lights of towns and villages below. It can get very windy here though so be warned. The density of the trees lessens from this point on and allow views of distant ridges. Pos 5 (2,398) is the best place to camp within the forest, with enough space for 4 or 5 tents.

Beyond Pos 5 is an area inhabited by ‘babi hutan’ (wild pigs) and although you are likely to hear some if you camp here you will probably not see them. There are some good spots for views, notably at around 2,452m. Pos 6 (2,531m) is the last forest post and also makes an acceptable camp spot with some good views too.

The trail gets progressively more interesting and challenging from this point on. Pos 7 (2,679m) is a minor peak in its own right (Moncong Assumpolong according to Open Street Map) and is also a reasonable camp spot. In clear weather you should be able to see the fabulous narrow ridges ahead coated in low bushes and occasional Edelweiss. Many of the low growing trees are covered in a moss that is boiled by local people for the treatment of asthma.

Directly after Pos 7, the trail descends quite steeply before climbing again to Pos 8 (2,727m). This ‘land bridge’ section between Pos 7 and 8 is rather dangerous at times and requires you to use your hands, especially in inclement weather when the rocks could be slippery. The views in fine weather are stunning. Finally you will reach Pos 9 (2,754m) which is a huge boulder with some overhang offering some shelter. This is also the best camping area on this side of the mountain because, although there is only enough space for 4 or 5 tents, the views are tremendous and it is less than 30 minutes from here to the trig pillar otherwise known as Pos 10 (2,874m). There is also a reliable water source 200 metres downhill.

The section between Pos 9 and 10 is in places the most technical and dangerous. You need to be reasonably good at rock scrambling. The trail leads up to the right before the huge boulder and then onto a very narrow ridge. One section of the ridge is blocked with a rock formation that you must take extra care clambering over. In 2020, there is a simple rope to hold onto, but it is much more vital to hold onto the rocks themselves as you negotiate the tricky terrain. To make up for this, the views are stunning here in every direction.

Pos 10 (2,874 metres above sea level) is crowned with a triangulation pillar, a boulder with names written into it by previous hikers and a small antenna compound. It should have taken no more than 30 minutes from Pos 9, or about 5-6 hours from the basecamp (it’s around 4 hours back down). Almost all local hikers regard this spot as the summit of Lompobatang. This is the usual destination of most hikers who enjoy the view, take some photos by the pillar and hiking club signs and slowly begin the return journey to Lembang Bu’ne.

But in clear conditions you will see the ridge continue for over a kilometre northwards – via what is clearly higher ground. Indeed, the true summit of Lompobatang is in the general area known at the basecamp as ‘Pos 11’ but there are no signs on the route (in 2020). Fortunately, this ridge is fairly easy terrain and a real delight to walk along.

From the remains of the antenna compound, the path leads down a little before ascending again to a narrow ridge with some very picturesque boulders. From here, the view to Bawakaraeng is stunning in the early morning. The trail is quite easy to follows with few obstructions and great views in all directions.

The first top to be reached beyond Pos 10 has a boulder on it and based on GPS readings in 2020 is the highest peak at around 2,886m. It is less than 20 minutes from Pos 10 to this point. However, if you want to be sure you have bagged the highest point, it is almost essential to continue for a further 3 minutes or so to another grassy top which according to GPS is around 2,885m. Let’s call this Pos 11.

From here, the trail drops down, following the top of the ridge, including one point where you clamber round some rocks on the very crest of a narrow section of ridge. You will see a narrow, rocky-looking peak ahead. According to GPS, this is around 2,880m, so not as high as the boulder peak and the grassy peak. It takes no more than 30 minutes to reach this point from Pos 10, so allow one hour return, or longer if you want to explore even further.

Beyond the narrow peak, it appears that there is no more ground of a similar height, although the ridge trail continues beyond the junction for Lembah Karisma and the traverse to Bawakaraeng (down to the right) to Puncak Kohbang / Ko’bang which is the alleged site of the tomb of the King of Gowa. It is a place of pilgrimage for local people and indeed the whole mountain range is highly spiritually significant – there are numerous mystical stories and superstitious advice connected to the area.

According to the Bakosurtanal map, the area near Puncak Kohbang is actually 2,870m – just 4 metres below Pos 10 – and is a grand viewpoint down to the valley between Lompobatang and Bawakaraeng. It has been noted that a peak near Puncak Ko’bang is higher than Ko’bang itself and possibly even higher than Pos 10, though based on our 2020 trip as far as the narrow peak (2,880m) it seems most likely that either the boulder peak (2,886m) or the nearby grassy peak (2,885m) is the true summit of the range.

For hikers wishing to cross (lintas) the entire range, the trail heads down to the right before Puncak Ko’bang, leading down into Lembah Karisma (Charisma Valley, named after the Makassar hiking group that opened the route in 1987). At this point the terrain becomes very steep and difficult, taking about 7 hours to reach the valley (approximately 2,200m in elevation).

Most hiking groups spend one night in the valley where there is ample space to camp and also water sources. From this point, the Pos numbers descend from 15 back to Pos 1 near the trailhead for Bawakaraeng at Lembanna. After having spent a night in Charisma Valley, the following day hikers start the ascent up to the peak of Gunung Bawakaraeng – apparently this requires the best part of a day too. Reports from hiking clubs who have completed this trip say that there are rocks on this section of the expedition that contain metal that can render compasses useless. There is also a tricky rock section where only one person can pass through at a time. After a third night on the mountain range, in the large field near Bawakaraeng summit, they slowly descend to Lembanna and take public transport or ojeks back to Malino and then home to Makassar. 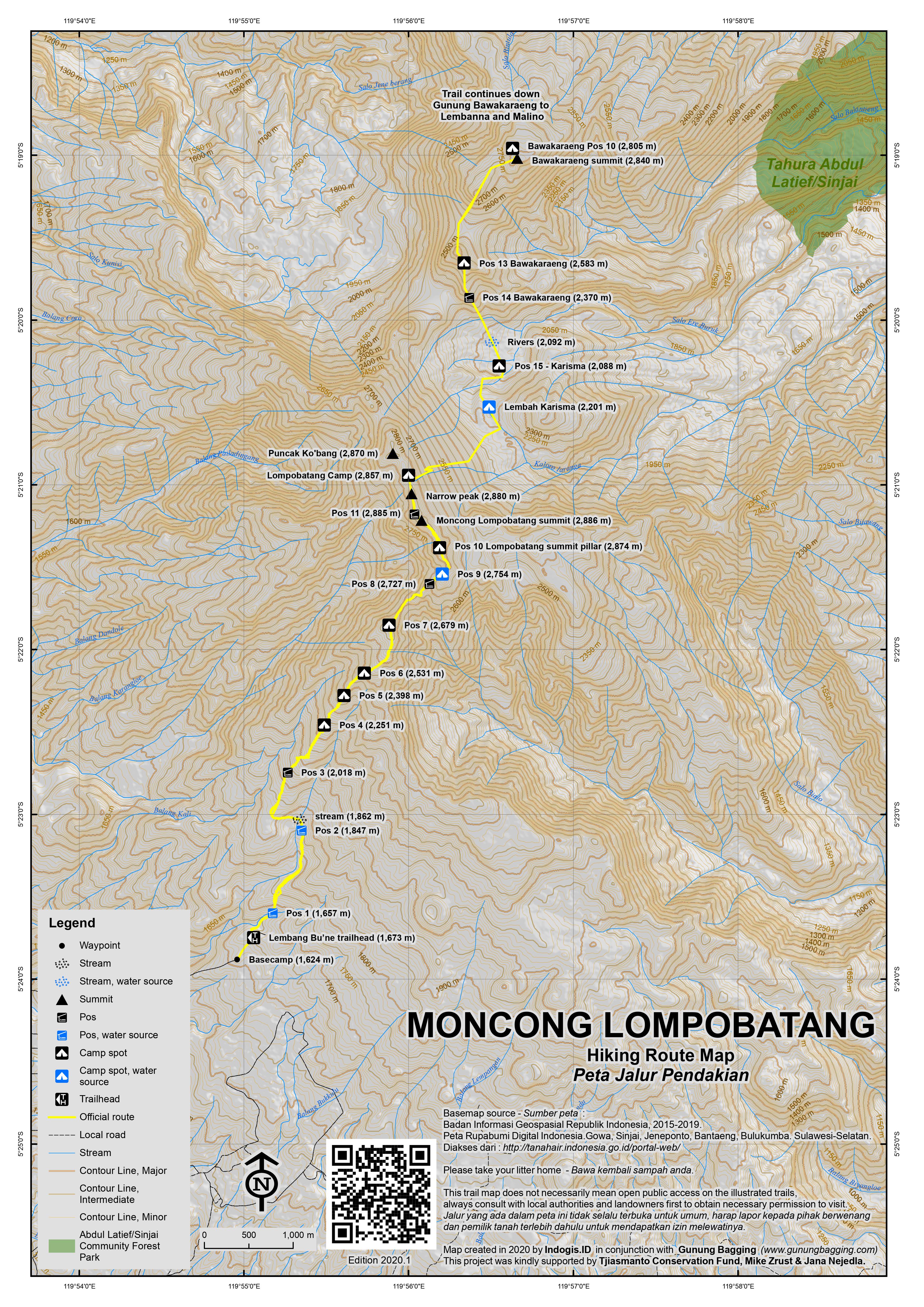