Manado Tua is an inactive volcanic cone island off the west coast of North Sulawesi, close to the capital Manado. There is a good path to the top and the summit offers great views over the other islands and Manado Bay. In good weather you can see the smoking cone of Gunung Soputan almost 60 kilometres away. But be careful you don’t fall into the huge hole at the summit which was made recently by local people looking for buried treasure!

It is not difficult to arrange a day trip to the island from Manado – motor boats take approximately one hour to cover the 10 miles distance. However, while you’re in the area you might as well stay on the delightful neighbouring resort island of Bunaken, one of Indonesia’s diving and snorkeling hotspots.

From Bunaken it is about 30 minutes by boat to the village of Papindang on Manado Tua. You should be able to charter a boat from Bunaken to take you there and then back to Manado city afterwards for a total of 1 million rupiah or less (including a guide fee of around Rp200,000). It is best to set out as early as possible from Bunaken (5am perhaps) to beat the worst of the heat and enjoy the spectacular dawn views of North Sulawesi’s volcanoes and islands. The climb starts at sea level so suncream, hats and lots of water are required. The handful of locals that regularly ascend the peak claim it takes them just over an hour. For most people carrying a backpack of food and drinks with them it will take a minimum of two hours to get to the top.

The trail starts behind the village houses, where a guide can be found, and leads up through coconut plantations. Several huts are to be found on the trail which are ideal for getting a bit of proper shade. The trail even leads right through one of the huts near the beginning. There are some pleasant views of low-lying neighbouring islands halfway up and after about 90 minutes you should have reach the rim which is at about 610 metres high. Take a left here and follow the path straight up for a further 30 minutes to the flat summit.

The first thing you will notice at the summit is the cement pillar which is leaning to one side. Next to it is a deep hole which looks like a well. Take real care here because you would have real difficulty getting back out of this hole should you fall in and chances are you would be seriously injured. This hole is not a well, but a man-made pit, created recently by local villagers and others from Manado city alike, who were for some bizarre reason convinced that there was buried treasure to be found at the peak of the island which had been left there in Dutch colonial times. According to locals it took quite a while to dig such a deep hole (it is perhaps 15 or 20 metres deep or more) and police from the mainland were eventually called. Needless to say, no treasure was found.

There is also a small monument marking the planting of a Matoa tree at the summit. Matoa is a delicious fruit common in Eastern Indonesia. Better still is the view on a clear day which, though limited by trees in most directions, offers splendid panoramas of Manado city and Lokon and Soputan volcanoes. You can just about make out Klabat through the trees too.

It takes just over an hour to descend and it is much easier with gloves and a stick on what can be very slippery terrain after rain. After admiring the island’s churches and chatting with the friendly locals you can either head back to Bunaken or ask your boatman to take you direct to Manado. 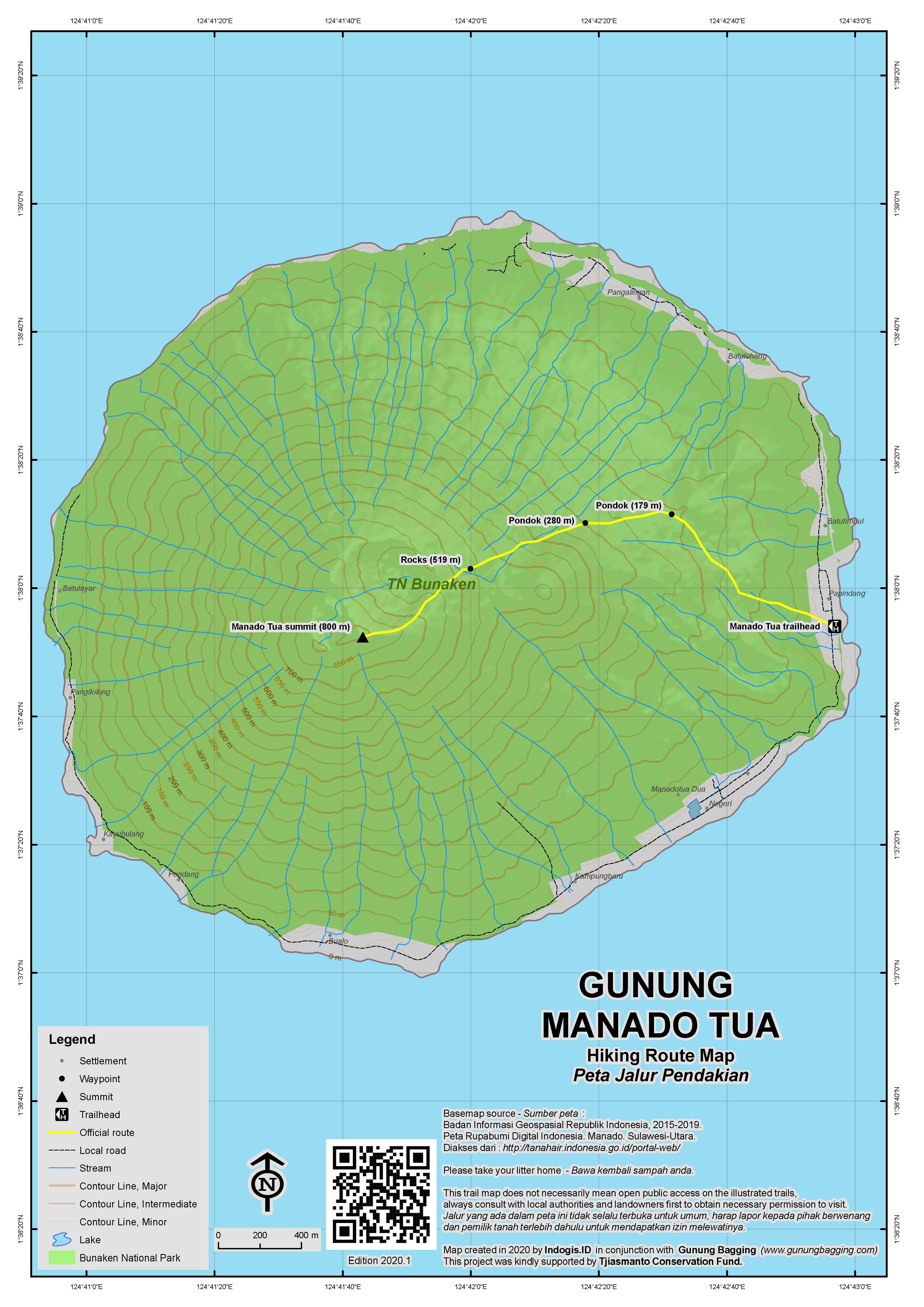 Literally old Manado. It may effectively mean something similar to ‘the old man of Manado’.