According to Nepenthes expert Alastair Robinson, the mountain is ‘called Gunung Guguang or Gunung Gay depending on who you talk to. There are two adjacent peaks in the area, and the maps call the highest one Guguang, but the Dayaks there call it Gay, and vice versa for the other peak. It’s a beautiful area, punctuated only by logging roads and the odd Dayak village. I went alone, which made it horrifically expensive, but if I ever return, I’ll try to get in via perahu instead of jeep. They really sting you for petrol in Berau, whether or not you speak Bahasa.’

In 2020, we discovered that a peak in the far west of the range was higher than Gunung Gay – Gunung Kongpas (1,468m) according to the Bakosurtanal map, but almost certainly over 1,500 metres according to SRTM data. This is even harder to get to than Guguang or Gay. Gay remains pretty prominent with 758m despite being part of the same large range. 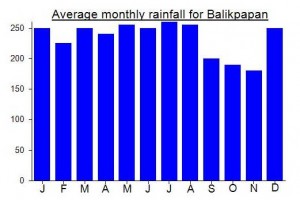