Tioman is the only significantly mountainous island of several scattered off Peninsular Malaysia’s east coast. Despite being a popular holiday island, the forest remains very wild and is home to some endemic species.

Most visitors to Tioman get their first view of the island’s peaks from the boat over from Mersing. The extinct volcano of Gunung Kajang is easily the highest, yet the most dramatic peaks are near-vertical granite cliffs to the south of the island known as the Dragon’s Horns. These are Batu Sirau (747m) and Nenek Si Mukut (685m) – and are of real interest to rock climbers.

Gunung Kajang itself is less impressive when first seen on approach to Genting and Paya, an unassuming high jungle-clad ridge that not many pay much attention to after having seen the Dragon’s Horns. Most hikers start early and do this as a long day-hike, but camping at the summit is apparently also possible. Be aware that Tioman’s forests are full of leeches, so leech socks are recommended. Also note that there are very few panoramic views on the trek and local guide prices tend to be sky-high, even by Malaysian standards.

The most commonly-used trail starts in Kampung Paya and how long it takes to reach the top from there depends entirely on how recently anyone else has been up there. If you’re lucky, and another group has been up in recent weeks, it takes around 5 hours to reach the peak. If nobody has been there for over a year then the trail will be incredibly hard to see for much of the way and it could take 7 or more hours (one-way). So it is crucial to find out the state of the trail from a local guide first before making any assumptions. It is also vital to start very early, before first light, regardless of what your guide suggests. Otherwise you may end up coming down in the dark, through what is tough terrain to navigate at the best of times.

There are various trails criss-crossing each other behind the Paya village resorts, some of which are used as an ATV track. The first major landmark is ‘Mother Willow’ (90m), an impressive old willow tree that some adventurous families trek up to in about 30 minutes from the beach. Mother Willow is signposted, but beyond the old tree there is very little to go on aside from a few yellow daubs of paint on branches and some ropes on the higher slopes. Therefore an experienced guide is completely essential.

The birdlife here is excellent and there is also a good chance of spotting mouse-deer (‘kancil’). If you are extremely lucky and here at the right time you might come across Rafflesia tiomanensis. After a dry stream crossing (224m – not dry during the rainy season), there are two reliable ‘water points’ on the trail at 299m and 627m. The steep terrain between these two streams is challenging, and often overgrown. Beyond the second water point, the trail appears a little clearer with some impressive large boulders passed by (636m and 820m).

And then comes the most challenging section of all, a large cluster of giant boulders (850m) with ropes showing the way over narrow ledges and between considerable drops. A fall here could easily lead to hospitalization and so extreme care needs to be taken. At one point you need to drop down through a hole in the ground before clambering over several boulders with deep dark crevices on either side.

Once past this challenging section, it is a fairly easy 30-45 minutes up to the summit where there is a metal pyramid structure (beirut) as commonly found on Malaysia’s mountain-tops. The views are limited due to the density of the vegetation, but if you have made it here then you deserve a pat on the back!

Assume about 4-5 hours back down to Paya beach, but allow extra so that you don’t arrive in the dark.

Apparently, there is another vague trail up from Kampung Juara on the east coast of the island. However, it is much less well-used and if starting in the morning then you may have the sun on your backs – one advantage to starting in the west at Paya. The one appealling thing about the Juara trail is the presumed easier terrain as you would not need to navigate the dangerous boulders encountered on the Paya trail.

As for the Dragon’s Horns, a short, decent, and sign-posted trail leads part of the way up to a great viewpoint beneath the cliffs (at Checkpoint 9), looking back down to the ocean. The trail starts in Kampung Mukut where there is some accommodation. Unfortunately the regular boats do not call at Mukut so you would need to charter your own or trek along the coast from further north, assuming it is possible to do so. 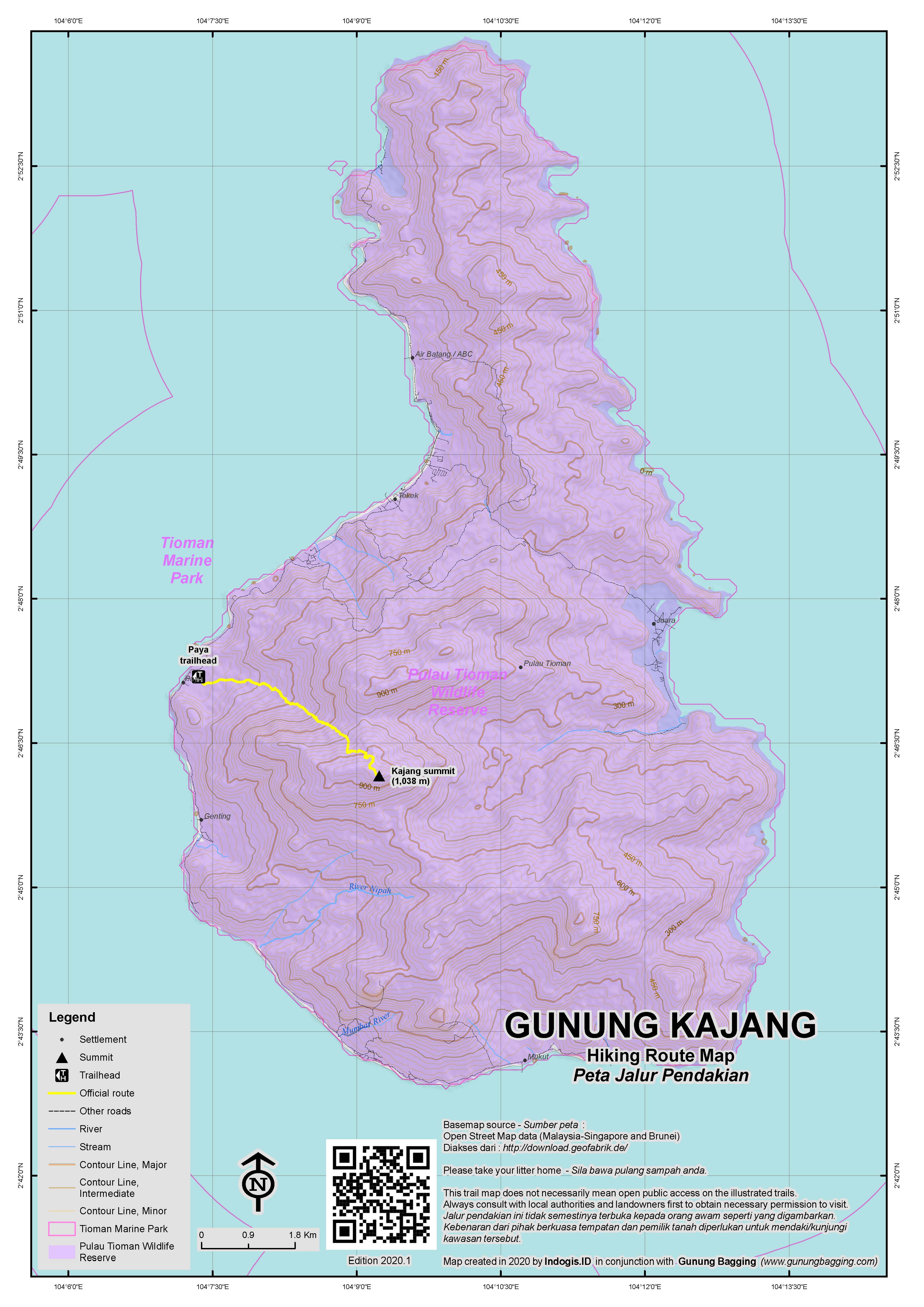