Considering how accessible Gunung Kaba is, it is remarkable that it isn’t one of Sumatra’s most famous natural attractions. Not only is it reachable on a regular weekend from Jakarta (via a flight to Bengkulu) and close to a lovely hotel, there is also a narrow asphalt track up the mountainside followed by a couple of hundred steps up to the spectacular volcanic scenery that awaits on the crater rim. Given just how stunning the panorama is and how little effort is required to reap such a reward, it really doesn’t get any easier than this!

The main road running from Bengkulu to Lubuk Linggau runs very close to Gunung Kaba, and, about 20km after the small city of Curup, reaches a height of 1,100 metres above sea level near a small lake. There are a couple of homestays in the area but a particularly peaceful and pleasant hotel is Vila Hijau which offers views over the lake and is just 1km east of the Gunung Kaba road junction. Just by asking the staff at the hotel it will be very easy to find a local chap with a motorbike to take you up the narrow track to the crater the following morning. Of course, you could visit in the afternoon – or even spend a night camping up there – but the finest views are usually to be had during the hours immediately after sunrise.

Gunung Kaba is signposted ‘Bukit Kaba’ (Kaba Hill) on the main road near Desa Sumber Bening and Desa Karang Jaya but , in any case, most local people will be able to tell you where the junction is (‘simpang Bukit Kaba’). After less than 15 minutes on a motorbike you will reach the entrance gate – a metal pole across the road (1,312m) – but, assuming you’re up before it becomes staffed at 8am, you will probably have to pay the small entrance fee on the way back down. At this point you do actually have two options. You could hike for about 1 and a half or 2 hours on a different jungle path near the entrance gate or you could stay on your motorbike and continue up the road, under another entrance (1,360m), and zoom up the narrow, occasionally overgrown track that leads all the way (past a new shelter at 1,488m) to just below the largest crater. Given that it takes just 30 minutes on the motorbike (or just over 2 hours by foot as it is slightly less direct than the jungle path) most people don’t mind ‘cheating’ on this occasion!

It is probably good advice to expect to get your trousers wet with morning dew and to wear a hat and sunglasses to avoid any of the dense vegetation from scratching your skin. There are one or two places where you will have to get off the motorbike and crouch under a fallen tree and the track deteriorates at one particular point higher up before widening to a small motorbike parking area and the remains of a cement building (1,875m) which presumably once housed a small shop selling snacks. From here the views are spectacular. The mysterious Gunung Pasu lies to the north over on the other side of the valley. From here it’s an easy 5 minute (maximum!) climb up about 200 cement steps to the edge of the crater rim (1,925m).

In good weather, the view is one of the finest in Sumatra. The crater is perhaps 200 metres deep and approximately 1.2 kilometres wide, with near vertical cliffs. On the floor of the crater are numerous fumaroles and a small, pale blue lake. You may even spot Gunung Dempo in the far distance to the south. A cement ‘fence’ is in place to stop people wandering too close to the edge but this crumbles to northing just metres either side of the top of the cement staircase. This crater is Kaba’s largest and is known as either Kawah Hidup “(‘living crater’) or Kawah Besar (‘big crater’). As you will see a little later, there are other craters to see nearby.

Wonderfully, a circuit of the crater rim is possible and not technically demanding. A trail leads all the way round and takes just over two hours. This is recommended for the careful and adventurous because there are one or two places where you can take some excellent photographs and you also get to know the mountain complex a little better. If you hike anti-clockwise, the first top you will reach is a rocky peak (1,939m) just five minutes away from the top of the staircase. Local people often leave spiritual offerings here. Just beyond this peak is a cement marker (1,935m) from where you will enjoy pleasant views over the city of Curup and to Gunung Daun beyond. Continuing on and after another half an hour you will have reached what appears to be the highest point on the rim (around 1,950m on the map but my GPS actually gave a reading of 1,961m). From here you can peer over at the fumaroles and they continuously bellow gases into the air. The old photograph of two Europeans on the crater rim in 1936 was taken somewhere around here.

If you look to your right (westwards), you will see a forested peak about one kilometre away, to which there appears to be no trail. Based on various analyses it seems that the true highest point of the entire Kaba range is over there in the undergrowth, just a few metres higher (1,952m)! Unfortunate, but it doesn’t seem like you can truly bag Kaba at this moment in time. Anyway, not reaching the highest point isn’t such an issue when you are surrounded by such otherworldly beauty as this.

After reaching a second cement marker (1,946m), the trail drops down a little before flattening out on its southern side for quite a while. There are some lovely views down to valleys and villages to the south. Eventually the trail leads up again to the final major ‘peak’ of this crater, which is also home to the third cement marker (1,927m). Before you have reached this point it will be obvious that there is more to this volcano than a single large crater. Indeed, this peak overlooks a narrow, steep ridge leading directly back up to the starting point. But there is a second crater to the north-east!

The insides of both of these craters can be reached on fairly well-defined paths from the col at the lowest part of the ridge between the southern peak (with the third cement marker) and the staircase peak. Indeed, if you’ve visited on a weekend then you may well see local students down there getting dangerously close to fumaroles!

Unless you want to get dangerously close aswell, it is recommended that instead of trying to clamber back up to what looks to be an incredibly dangerous and demanding ridge in parts, you continue eastwards, following the path that leads around the rim of the lower, north-eastern crater which is called Kawah Mati (‘dead/death crater’). Despite the name, this crater is active too, perhaps moreso, given that the activity in the entire complex appears to be moving slowly eastwards. This crater is a deep, evil-looking pit which belches smoke and at least one local hiker perished here in recent years so take real care. Further round on the far side of this rim you will see a smokey blue-green lake inside it. You will also see another shallow crater further north-east with a small, shallow lake. This is known as Kawah Lama (‘old crater’).

All of these craters can make it difficult to explain the different places on the mountain, especially as few names appear to have been universally agreed upon. Starting from the south-west, we essentially have the following: In the far west is Bukit Hitam (or ‘Itam’ – Black Hill) a forested mountain about 1,886 metres high. Next is an ancient, forested peak which appears to be the True Peak of the range. Third, we reach the crater rim of Kawah Hidup – the largest of Kaba’s craters. On this rim we have several minor peaks – including the staircase peak and the highpoint of the rim. Next we have this smaller crater called Kawah Mati, the pit belching smoke, and within it is the mini side-crater formed in the crater walls beneath the southern peak. Next we have the small, shallow lake crater (Kawah Lama) and finally we have a further outlying crater which became active in 1950-1951. It appears that the latter is known as Kawah Vogelsang (Vogelsang Crater) presumably after a European geologist but it remains unclear – perhaps Vogelsang is the pit belching smoke (Kawah Mati)?

Hopefully in good weather it will be perfectly obvious how you can get back to the starting point at the staircase from the second active crater. Simply follow the edge of the steep rim (peer down at the blue-green lake!) back up to the cement fence or cut across to the parking spot. You may well spot several tents near the parking spot. The aforementioned jungle path from the villages is very popular at weekends with local student hikers who climb the volcano properly (no motorbike!) on the alternative route and camp just 5 minutes away from the staircase.

It’s a truly beautiful and fascinating volcano complex. Recommended to all keen hikers – even adventurous families who don’t mind hanging on to the back of motorbikes for half an hour! 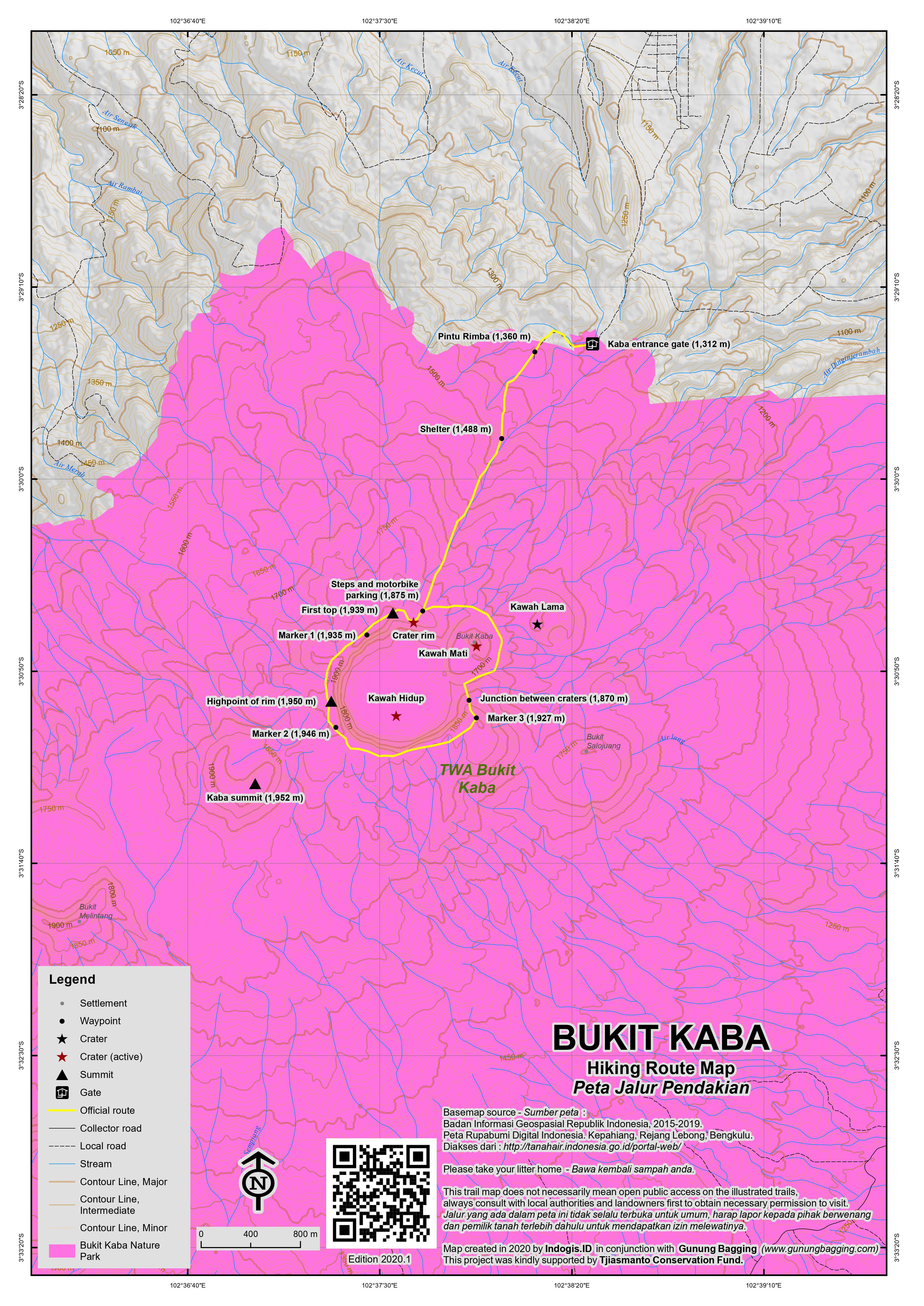