Gunung Irau (not to be confused with the mountain in Papua of the same name) is the highest peak in the popular Cameron Highlands, a plateau developed in the 1930s and named after Scottish geologist William Cameron who first surveyed the area in 1885. The road winding up from Tapah to the main town of Tanah Rata is quite exhilarating and the region is an extremely popular tourist area today.

Located on the main Titiwangsa mountain range, Tanah Rata lies at an elevation of around 1,450m above sea level. The temperature is delightful and allows a wide range of plants to be cultivated, including fruit, vegetables and most notably tea – the vast Boh tea plantations cover the north-east end of the plateau. The main road in the Cameron Highlands runs between Tanah Rata, Brinchang (sometimes spelt Berinchang) and Kampung Raja near the tea plantations and there is a regular, cheap bus running back and forth throughout the day.

In the past, the area has been popular with hikers, with local tourist maps detailing numerous jungle trails. Today, the main attraction aside from the tea plantation, local produce and tourist stalls is the so-called Mossy Forest, a boardwalk along a ridge on Gunung Brinchang (2,032m) which is the second highest peak in the Cameron Highlands and usually combined with Gunung Irau on the same trek. The hiking opportunities ought to be great, but recent local mismanagement and lack of reliable information means it is often a rather disappointing and regimented experience.

There are signs for the Mossy Forest everywhere, and it appears to be the number one tour offered to tourists in Tanah Rata, whether for sunrise or as a half-day out in combination with a trip to the tea plantation. For experienced hikers, there is nothing particularly special about the forest here as it is quite normal for mountain ridges of this elevation in this part of the world to be ‘mossy’. It is the accessibility (most of the time!) that has lead to its considerable fame and popularity.

Gunung Brinchang (or Batu Brinchang as it is also known) can actually be driven up and is the highest section of road in all of Peninsular Malaysia. The junction for the Brinchang mountain road is opposite the Cameron Square shopping mall (1,605m) and it is around 6 kilometres from here to the summit ridge. This access road is steep, narrow and pot-holed in some places but despite what you hear, most regular cars should be fine if driven by careful and confident drivers. Most people go on tours arranged in Tanah Rata and the biggest problem you will encounter (other than the long list below) is the sheer number of other cars on such a narrow road. For those who prefer to walk up, allow around 2-3 hours to hike up to the Mossy Forest entrance and 2 to descend.

Looking at the maps and the shape of the mountains, and ignoring the bureaucracy and hassles noted below, the best full-day trek would be to follow what used to be called Jungle Path 1 (more recently Brinchang Barat trail) from the outskirts of the town of Brinchang (1,500m) and ascend to the communications compound and towers at the top of Gunung Brinchang (2km, 2 hours or less) before somehow squeezing along the side of the compound fence then walking 600 metres northwards along the summit access road, entering the Mossy Forest walkway (1,972m), heading out to Gunung Irau (allow 2 hours each way) and then back out at the Mossy Forest and just under 6 kilometres down the road through the Sungai Palas tea plantation to the main road (1,605m) where you can catch a bus or taxi back to Tanah Rata or wherever you are staying. Total hiking time would be around 8 hours not including breaks.

The section between the Mossy Forest entrance and the summit of Irau is not as simple as it might appear. Although it begins as a boardwalk (sometimes known on maps as Jungle Walk 14), and only 2.35km long, the ridge leads up and down and goes via Mini Irau (2,031m elevation) which is a false peak and is also sometimes used as a campsite. Much of the trail is very muddy, yet quite pleasant moss forest. That is why it takes most people two hours in each direction.

Unfortunately, there are so many problems with this fairly simple plan that we have decided to produce a list, to help visitors be aware before they arrive, and also on the off-chance that the clueless authorities see sense and simplify matters for adventurous tourists.

In view of the above issues, an alternative, very different and more demanding approach from the northern road (1,435m) near Green View Garden via Gunung Pass (1,587m) and Gunung Yellow (1,767m) is preferable for serious hikers, especially doing a full traverse by finishing at Mossy Forest. It would certainly be much quieter for the most part, far from the tourists, restaurants and weekend traffic jams of the Tanah Rata – Brinchang road, and is apparently doable in one long day or spread over two days with one night camping. It can also be combined with Gunung Suku (1,797m) to form what is known as the Trans Jerging (named after a local river) and is generally hiked in the order Suku – bonsai tree ridgeline viewpoint – Irau – Yellow – Pass because Suku offers some great views of the Titiwangsa range. 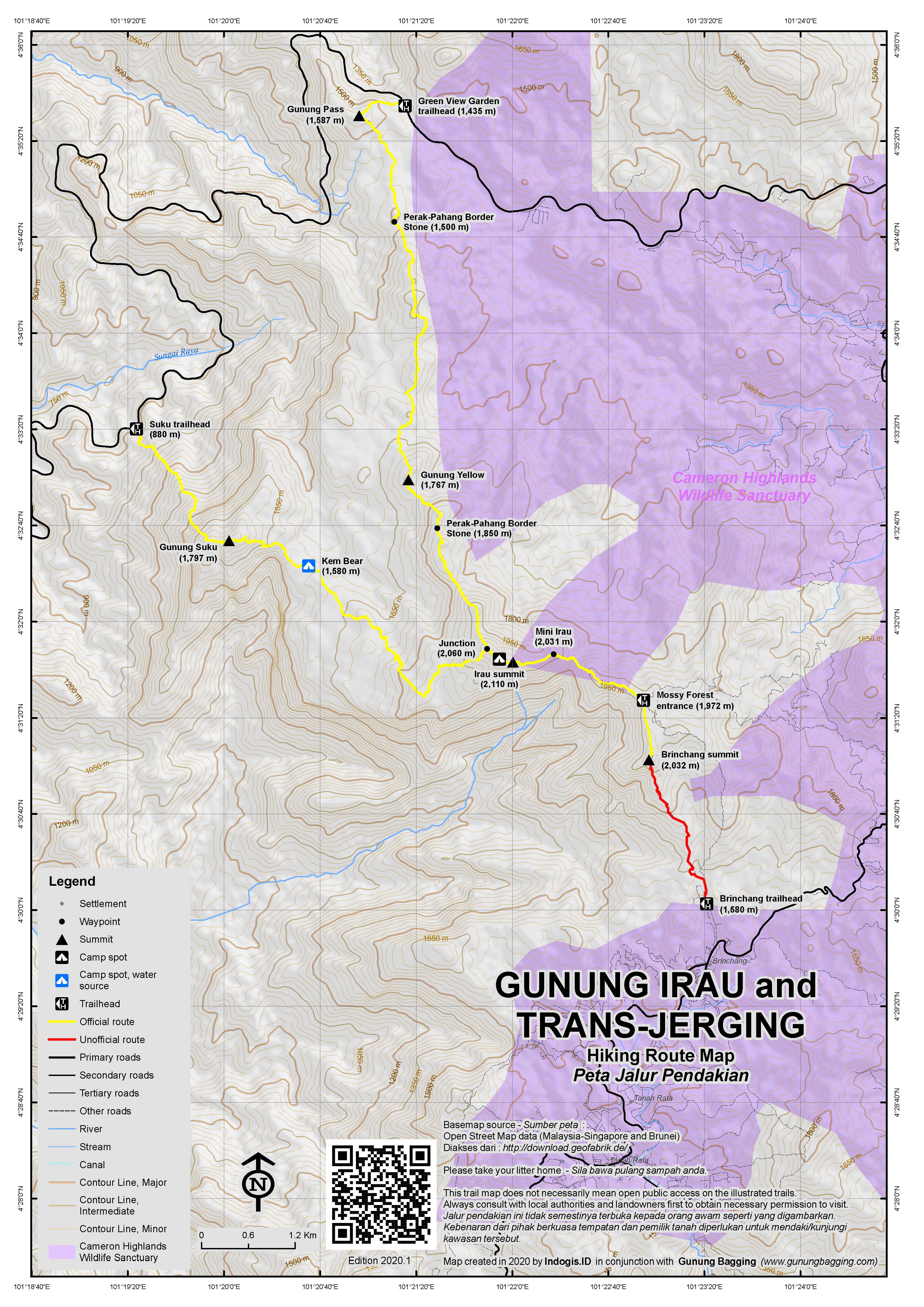 One thought on “Irau (Malaysia)”