Gamkonora is the highest peak of Halmahera.  Since its first recorded eruption in the 16th century, Gamkonora has typically produced small-to-moderate explosive eruptions.  Its largest historical eruption, in 1673, was accompanied by tsunamis that inundated villages. The shifting of eruption centres, to the south, has produced an elongated series of summit craters along a N-S trending rift.  (Smithsonian Global Volcanism Program) . The volcano last erupted in 2007.

The hike is highly recommended – it’s a pleasant “stroll” to the summit, a spectacular mountain for its extraordinary crater and towering walls on each side, open ridges below the summit, and fantastic views. The crater lies in a U-shaped valley between two very high walls on the eastern and western sides.  From a view point at the northern end of the rift, one looks over a small lake and beyond to the craters, which were emitting enormous clouds of smoke every 40 minutes or so (September 2011).  A short climb of about 200 ms up the eastern flank takes you to the vulcanology sensors and, two knolls beyond, to the summit. Altogether, it takes about 4-5 hours to reach the summit from the Volcanology Post and 3 hours to descend.

The climb starts just above sea level and passes through coconut, nutmeg and clove plantations before entering forest, in which pandanus palms predominate, higher up the mountain.  A guide is essential to negotiate the tracks through the plantations and desirable for safety on the mountain.  Staff at the Pos Pengamatan Gunung Api can assist in recommending a guide or alternatively call off at Desa Baru about 20 minutes before you reach the trailhead and ask for help.

The ascent, about 8 kms, is a steady and enjoyable trek with very few obstacles or steep pitches.  Like Gamalama and Kiematubu, Gamkonora has a miqat, a point at which the mountain becomes sacred with graves of nenek moyang (ancestors) on top.  A small collection of coins lying on a rock just before entering the cane grass zone marks this point (at about 975m).  Above the tree line, the track is on small rocks set in hard sand making for easy climbing to the summit.

The first point-of-interest is a view point (at about 1,330m) at the northern end of the rift overlooking the small lake and beyond to the craters with walls towering up on each side.  After a short climb (about 300 metres) up the eastern flank, you reach the second vulcanology sensors (at about 1,550m) and, two knolls beyond, the summit.

The summit offers spectacular 360 degree views – north along the west coast of Halmahera with its many off-shore islands, north to neighbouring Gunung Ibu, north-east to Gunung Dukono behind Tobelo in the far distance, east and south-east to the high, non-volcanic mountains of the south-eastern branch of Halmahera, and south to Gunungs Gamalama, Kiematubu and Makian.  A broad ridge, covered in low bracken and frequented by deer, runs down from the summit to the north. 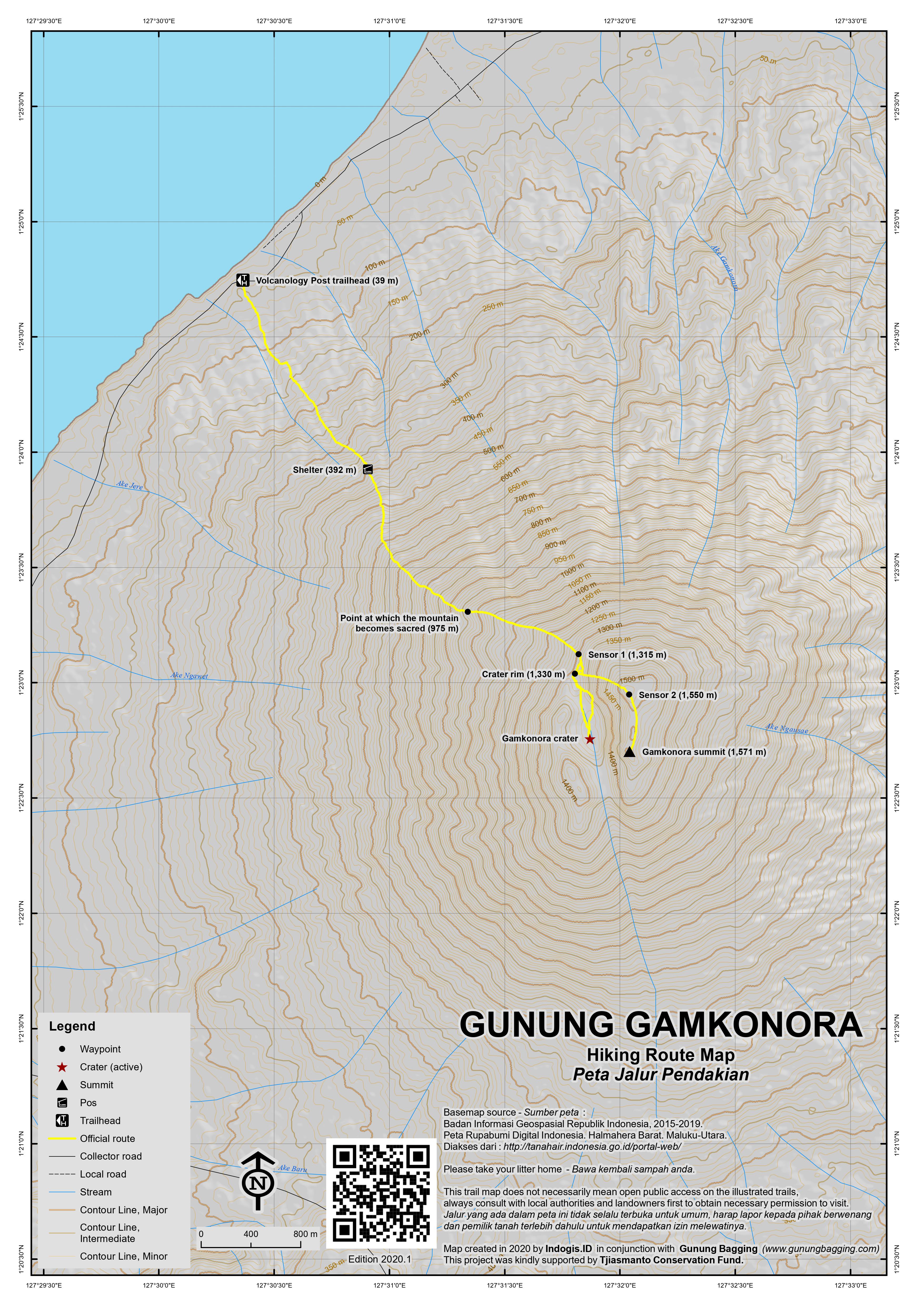