The Gunung Gading National Park near Lundu is world-famous for its Rafflesia flowers which regularly bloom near the Park headquarters. During those times, tourists flock to see the largest flower in the world but it can be difficult to predict and the blooming period is very short. It seems to be most common in November, December, February and March but can happen at any time of the year. There is also some very good trekking in the Park.

There are numerous minor trails near Park HQ – mainly plank walks in order to see the Rafflesia without damaging them by stepping on them, plus a couple of viewpoints of Lundu town and the South China Sea.

The Gading range consists of several peaks including three that are over 800 metres high and one to the north – Gunung Sebuloh – which is considerably lower. The lowest of the three is Gunung Lundu, at around 823m. The central peak of the range is Gunung Perigi, and the eastern peak is Gunung Gading itself, about one kilometre away from Perigi and much more accessible. After a fair bit of research of old maps, SRTM data and at the Park HQ itself, the excellent Department of Survey and Mapping Malaysia has finally put the debate to an end and confirmed that the height of Gunung Perigi is 892 metres and Gunung Gading is 889 metres.  This is based on the new topographic map MY512A series. Therefore Gunung Perigi is the true summit of the range, but is only 3 metres higher than Gunung Gading.

Gading peak can be reached in under 3 hours by fit hikers, so can definitely be done quite easily as a day-hike. Quite aside from the accommodation, the Park HQ (39m above sea level) is excellent – with a place to park, informative staff, an ‘Interpretation Centre’ full of information, and even a shower! It’s just a shame they don’t have a detailed topographic map of the range.

From Park HQ, the Gading summit trail leads along a clear forest path with plenty of signs.There are three waterfalls near the trail – with junctions at 116m (for Waterfall 1), 235m (for Waterfall 3) and 305m (for Waterfall 7). Between the junctions for Waterfalls 1 and 3 is Batu Apek (‘the old man rock’). The story goes that an old Chinese man got lost in the forest and then spent several days praying here before finally finding his way out of the forest. He returned daily to pray here and there is a shrine to this day. The shelter that the rock gives, plus the water source within it, would certainly make it the obvious spot to stay if lost.

Getting lost these days seems quite unlikely, given the large number of signs and the red and white paint on rocks next to the trail. The red and white very much resembles the Indonesian flag which is rather bizarre! You may encounter one or two leeches but leech socks are not strictly necessary.

Looking at old photos of trail maps for the area, it seems that Perigi summit used to be an option for hikers. It is no longer mentioned as widely, either because there was little interest in hiking there or because the management don’t want to risk people becoming lost. The reason remains unclear, but if a trail is not used for months or years it soon becomes invisible – part of the forest once more. Anyway, at around 500m above sea level there is a ‘no entry’ sign on the left. This may have been where the old junction for Perigi was, but one source suggested the trail to Perigi summit starts beyond Gading summit. Anyone who has visited Perigi summit is encouraged to leave a comment below to clarify matters.

Fit hikers should have made it to the top of Gading in around 2 and a half hours in total. You will know you are close when you spot a couple of old oil drums. According to official literature, the summit “was the location of a British army camp during the communist insurgency of the 1960’s. The remnants of the camp – a helicopter pad, water tank and barbed wire fencing – still remain to this day, and appear somewhat out of place in the middle of a national park. However, they are of historical significance and the park staff intend to preserve the summit area as it has been for the last 30 years.”

During our visit in October 2018, we didn’t spot the barbed wire or the helipad, but there were numerous oil drums, a presumed water tank, and the wooden frame of a large shelter, presumably made from durable ironwood (‘belian’). There are no views from the peak, but just a few flags and summit posts with incorrect elevation data on them. The temperature here is delightful.

For those with plenty of time, the trail continues beyond Gading peak and down to Batu Berkubu (‘fortress rock’). Apparently the Batu is 2-3 hours (return) from Gading summit so quite a considerable extension to the hike.  Another site of historic interest, Batu Berkubu was the site of a communist basecamp.

Strong hikers can be back down at Park HQ for a shower in around 2 hours.

For those staying in Lundu or at nearby Pandan beach, it is definitely recommended that you visit the tiny Bukit Gondol (85m elevation) on the coast at Tanjung Batu, Pugu beach. From the top of this tiny, grassy hill you will have fabulous views of the Gading range, the Berumput / Kanyi massif on the border with West Kalimantan, the Santubong peninsula in the distance, and the ocean below. There are even pitcher plants here. 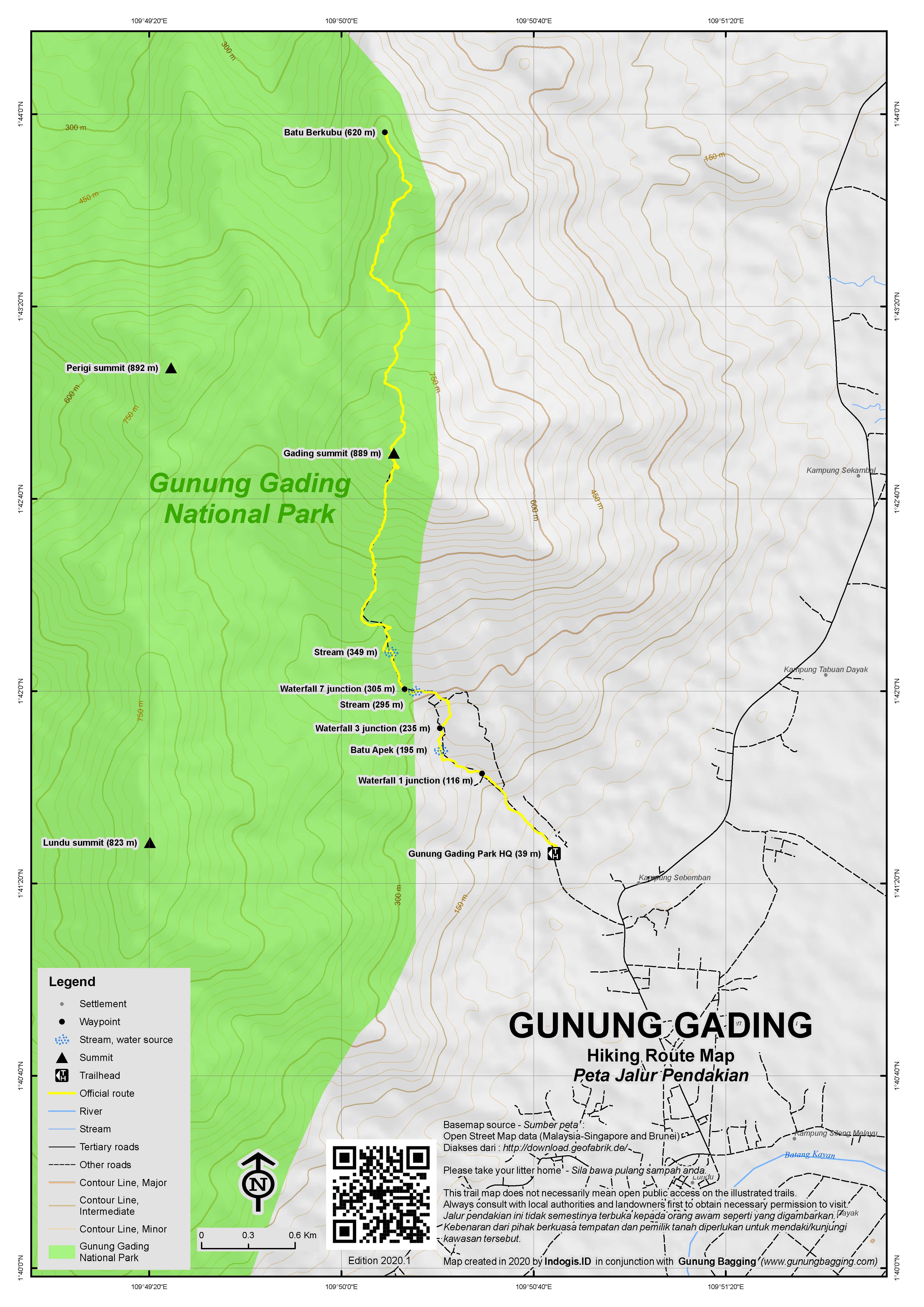