Doro Dindi (previously mistakenly-known as Doro Oromboha) is located to the west of the town of Bima, about 25 kilometres in a straight line (or just an hour on motorbike). The trailhead is at the hill village of Padende (795m) in the Donggo region. Unlike the roasting hot and often bone-dry treeless lowlands of Sumbawa, this highland area is forested and is apparently excellent for farming.

Quite surprisingly for the island of Sumbawa, there is a small Christian population in this area and the region is also known for its pre-Islamic animist belief system and traditions. Also of interest is an inscribed stone (‘batu tulis’) called Wadu Tunti Bumi Pajo just a kilometre or so down a bumpy track from Padende. This supposedly dates from the 14th century and features sanskrit text and images. Possibly related stones carvings known as Wadu Pa’a are to be found about 60 kilometres from Bima on the coastline.

Very few hikers climb into the forests of Doro Dindi, usually preferring to ascend the steep, bald pyramid hill called Doro Leme (1,140m according to one old military map) – which is clearly visible from the trailhead – and from the summit of which you can apparently clearly see Sangeang island. However, Doro Dindi can easily be hiked in a day, requiring only around 3 hours up and a similar amount of time for the descent.

Doro Dindi is at the present time actually only frequented by occasional local villagers collecting wood with which to build houses or to hunt. The trail is very clear to begin with and leads gently up through farmland, scrub and follows two water pipes before reaching a river (965m) in less than an hour. Just before arriving at the river you will be able to see the sharp peak of Doro Dindi ahead on the left. The trail disintegrates at the river into a couple of vague paths but if you cross over the river and head up the hillside to the left of the river you will soon gain a ridge (1,030m).

The trail at the middle section is rather vague in certain spots but then very clear on the narrower sections of ridge with mossy rocks. After a further hour you will reach another ridge (1,455m) where to continue going up you need to turn right. There are pandan plants and quite a few thorny vines to watch out for here. It is clear that wild pigs (‘babi hutan’) live in this part of the forest as you will see where they have been digging.

In clear views there are some decent views to be had, but often by lunchtime it is already hazy or even cloudy. In about another hour (or 3 in total) you should have reach the true peak, which in 2018 was unmarked except for evidence of a small fire presumably made by a local villager to keep warm. There are no signs and only limited views through the trees, which is a shame as from here it ought to be possible in excellent conditions to glimpse the mighty Tambora volcano about 70km to the north-west.

However, although it may not feel like it, Doro Dindi is a pretty significant peak. At around 1,618m (according to an old military map), Doro Dindi probably has over 1,500 metres of prominence and is therefore likely to be not just a Ribu but an Ultra (ultra-prominent peak). The Bakosurtanal map lists this peak as Doro Lambuwu with a height of 1,628m.

There is a lot of confusion as to the different names of the peaks in this range. Old military maps show Lambuwu and Denden (the latter perhaps from the village name ‘PaDENDE’) but according to locals that we interviewed on two separate occasions, the name of this highest peak is definitely Dindi (or possibly ‘Ndindi’). Those same local people use Oromboha (apparently meaning central or ‘middle peak’) to refer to the pyramid hill Doro Leme (it has several names, perhaps due to its memorable shape). ‘Dindi’ apparently means ‘closed’ in the local language and perhaps refers to the fact that it is a difficult mountain to see, being hidden or closed from view.

From aircraft into and out of Bima airport, Doro Dindi is clearly visible, along with Doro Leme. It is interesting to see that Dindi has two tops of a similar height less than one kilometre apart but this south-eastern one is definitely a little higher than the north-western one which, according to the Bakosurtanal map, is 1,601m in elevation.

The Smithsonian Global Volcanism Program refers to the range as Lambuwu or Lambuwa, which it describes as a Quaternary volcanic zone and is not thought to have erupted for at least tens of thousands of years. Certainly there is nothing to suggest to hikers of this peak that there is any ongoing volcanic activity.

You can be back down at the village of Padende in under three hours. 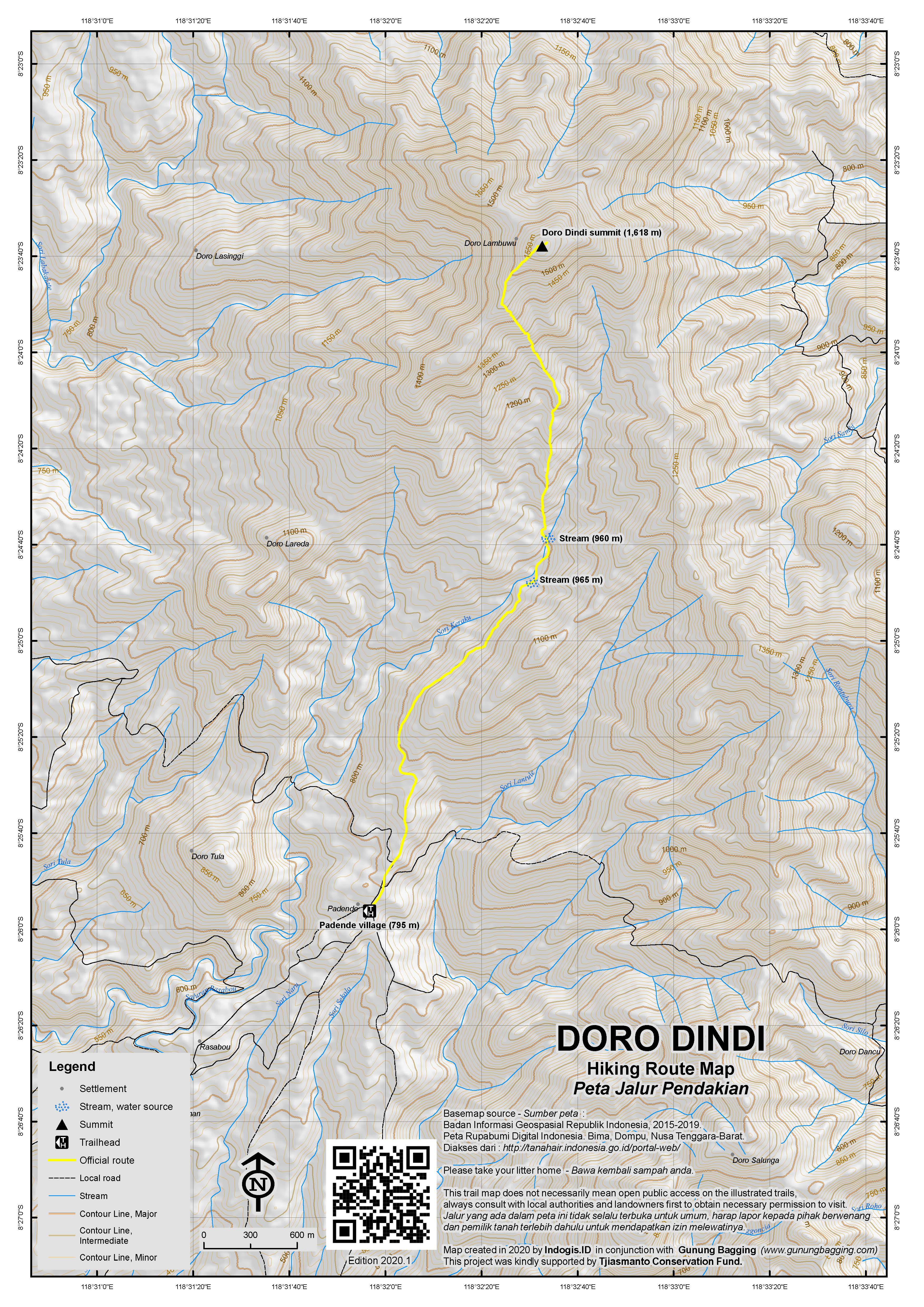