The strangely-named Gunung Tebak (‘tebak’ means ‘guess’) used to be one of the most mysterious mountains in Sumatra, with few trek reports to be found online and very little local information on there being any sort of trail to the true summit, despite it being the second-highest peak in Lampung. Its full name is Tangkit Tebak and it is actually the highest peak in a large range with numerous different peaks, the range itself being more commonly-referred to locally as Gunung Abung.

There are two main places that a hike onto the densely-forested range can feasibly begin. In the north-east, less than one hour from Kotabumi, is Tanjung Raja. From the centre of Tanjung Raja (200m), there is a minor road running higher up the slopes of the mountain to around 600m above sea level. A pleasant-looking sharp little peak in the foothills is labelled Bukit Batududuk (723.6m high and ‘sitting rock hill’ in English) on the Bakosurtanal map. One student group attempted to climb Tangkit Tebak from here in 2014 but, even with local help, they found it very difficult. Apparently, locals said they had climbed to the top in about 4 hours, but after 12 hours this 2014 team gave up short of the ‘summit’.

It is almost impossible that it would only take 4 hours to reach the true summit of the range from the Tanjung Raja side, not only because any trail is so infrequently-used that it would be re-opening, but also because the highest point is several kilometres further south-west, beyond other peaks and considerable drops and cols. It is therefore most probable that the locals were talking about the 1,700m-plus peak at the north-eastern end of the range which on some maps is known as Gunung Ulusabuk (1712.8m high and labelled Puncak Satu 7 on Google Maps, perhaps because it is over 1700 metres high and also perhaps as a nod to 17th August being Indonesia’s Independence Day when mountains such as this are hiked). This lower peak is more commonly-hiked now in 2021, and is known as Gunung Abung, a name that – as mentioned above – seems to be sometimes used for the range as a whole.

On the old US military maps of Indonesia, it appears that there is (or was) a triangulation pillar (P.72) at the true top of Tebak near the south-western end of the range, and if so then locals must have been up there in the early twentieth-century at least, however according to locals the only trig pillar was found lower down in the range near Dwikora.

In 2018, it was confirmed that a group of local hikers reached the true summit from Desa or Kebun Tebu near Tribudisyukur on the south-western side, taking an incredible 11 days to find a way to the top! Now that a trail has been made, it is possible to be up and down in two full days (one day up and one day back down again) and about 5 trips by various hiking groups have so far been made since then.

Sadly, access is difficult in 2021, with various departments needing to be consulted with prior to a hike, especially if you have any foreigners in your group. Indeed, it is not clear is permission will be granted in future, so anyone considering a hike here is encouraged to check and check again prior to starting your journey.

Not only is access difficult, the trail itself is very challenging, with leeches, spiky plants, very narrow ridges requiring the use of ropes, and mossy overhangs which are sometimes unstable. In short, you need a local guide who is experienced and knows the way. One Indonesian hiker described this mountain as the Raung of Lampung (referring to East Java’s difficult Gunung Raung) and this is a fairly accurate description, although whereas the trail on Raung is bare rock near the top, the Tebak trail is rotting vegetation and crumbly terrain which is difficult to judge and therefore needs approaching with extreme caution. Permanently fixed ropes are the only really safe approach to trekking this mountain, should the trail become popular and official in future. The positive side of the very narrow ridges is that panoramic views are possible, especially towards the pyramid-shaped Gunung Tanggamus.

From Desa Tebu (828m), plantation ojeks can be arranged up through the steep, muddy farm tracks as far as Pintu Rimba (1,277m). This saves perhaps an hour of hiking and the views back down to the valley below are exceedingly pleasant. Once in the forest there are a few minor trails criss-crossing each other, including a junction (1,459m) where a left turn would lead to the only decent water source. Pos 1 (1,506m) comes soon after and it should have taken most hikers no more than 45 minutes to get here from Pintu Rimba.

There is not much at Pos 1 except leaves and leeches, although it is flat enough to be camped at in an emergency. Note the two different types of leeches, with red ones on the forest floor and trying to get onto your boots, an the yellow and green ones that wait for victims and drop onto them from leaves! Babi hutan are the usual source of blood for the leeches, and indeed this part of the forest is home to many and the next landmark is ‘Sarang Babi’ (1,575m).

Beyond this is a landslide area which is steep and slippery, starting at 1,651m and ending around 1,695m. A forest ridge (1,730m) is then gained, but the ridge has plenty of ‘duri’ or spiky plants that can make progress very slow. After a great viewpoint on the left (1,770m) on the ridge is a large boulder (1,779m) which is so large it provides some protection from the rain. This is also the point at which you start to notice pitcher plants, with several varieties visible.

Further along the trail, a right turn is needed on another ridge, just before reaching Pos 2 (1,910m). Again, there is not much here and not much flat space for camping, but it is one of the few vaguely flat spots available on the trail. It also marks the end of the leech zone, which few of them living beyond here! It also marks that last place to camp before the narrow, challenging ridges that some hikers will find too difficult, as if the many ups and downs along the forest ridge were not enough!

A good viewpoint on the right (1,900m) soon follows, before the first challenging section which is known as Batu Goyang (1,902m). Here, you need to pull yourself up onto a knife-edge ridge of rock with massive drops on either side and vegetation that is not strong enough to take your weight. For safety, a long rope is recommended at this point. A little further along is the first of two very steep drops (1,906m) where rope is once again essential for proceeding safely. Beyond this is another short knife-edge ridge of rock known as jembatan (1,952m), at the end of which is a difficult step back up onto the vegetated ridge. Again, a rope is advisable here as a fall or accident would lead to absolute disaster at this point.

Beyond here there is one more steep drop (2,014m) where rope is recommended, and then that is it for the challenging sections until the very base of the summit itself. Beyond this steep drop, a high point of the ridge is reached (2,030m on GPS) which might be described as the false peak or Puncak Bayangan. The view here are excellent, but do take real care on the slippery, mossy logs. The trail then drops down to Pos 3 (1,983m) which like the other Pos is not ideal but there are simply no larger, flatter alternatives here. The views remain excellent, and you should be able to see the true summit of Tangkit Tebak ahead of you, less than 500 metres away. Most hiking groups need a full day to reach Pos 3 from the village (even for fast hikers taking no breaks, Pos 1-2 takes around 2 hours and Pos 2-3 takes around 3 hours) and it is the obvious place to stay if you are attempting to reach the summit and get back within 2 days.

Alas, just below the summit is another steep, challenging section (2,075m) where rope is pretty much essential to get up over the near-vertical terrain coated in moss, crumbly logs and weak vegetation. Some will make it and others may think twice given the dangers. For those who do succeed, it is only another 5 minutes to the summit which is crowned with a black summit sign. Back down to Pos 3 takes around 30 minutes or so, and then back down to Pintu Rimba a further 7-8 hours, carefully negotiating the same tricky terrain between Pos 3 and 2.

Near Desa Tebu there is actually a very interesting megalithic site called Batu Berak (or Batu Brak) which consists of many tens of standing stones and other ceremonial collections of rocks apparently many hundreds of years old. There is also a very lovely old weeping fig tree (‘beringin’). This spot is very much worth a visit in its own right, yet is not well known outside of Lampung. 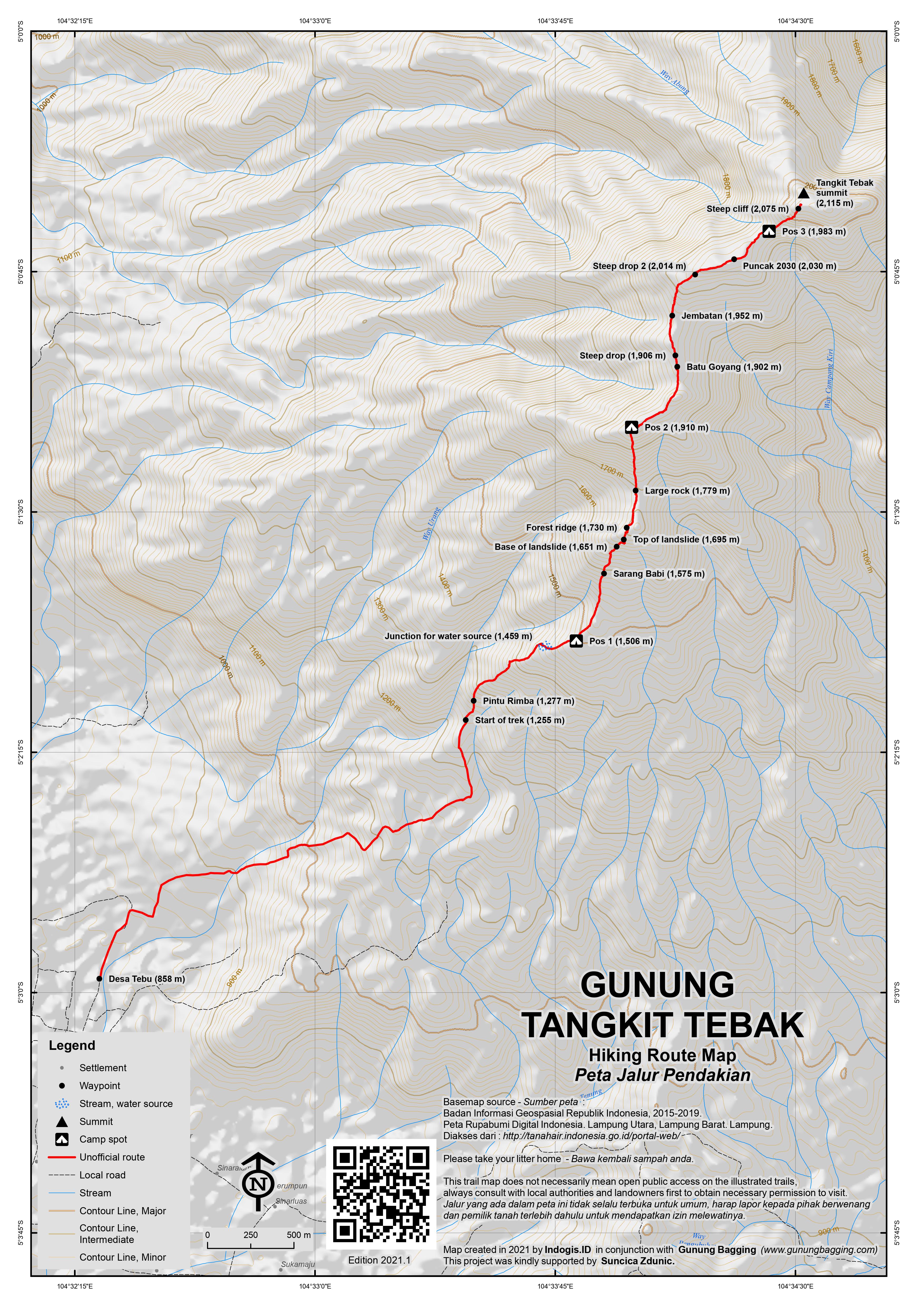