This Ribu is the site of the largest volcanic explosion in recorded history. In April 1815, the volcano erupted so violently that it was heard over 2,000 kilometres away and 71,000 people were killed. 160 cubic kilometres of fragmental material ejected in the explosion was responsible for 1816′s ‘Year without Summer’ around the world. It is no surprise, then, that the crater is enormous – over 7 kilometres in diameter. Thankfully, the volcano has calmed down considerably since the world-famous eruption.

Tambora is on the island of Sumbawa, which is served by unreliable daily flights from Lombok. There are now several official routes to the crater rim, but they vary in quality and popularity, and only two will bring you out near the true summit.

The most popular route is from Pancasila which lies to the north-west of the volcano. Getting to the starting point is an adventure in itself. Bima is the closest regional airport but, to be on the safe side, you may want to take the ferry over from Lombok. Once on Sumbawa, if you have a large group, you may perhaps even wish to charter a boat from the port of Badas to take you directly over (6 hours) to the small logging town of Calabai instead of the 8 or 9 hour journey by road.

The Tambora office (where you get a permit) is in Pancasila (474m) next to the village field and it is recommended that you take porters from Pancasila rather than Calabai. It takes just under one hour along very bumpy roads to reach Pancasila from Calabai.

You can start the long trek to the crater in Pancasila itself, but better still arrange for a truck to take you up the track as far as it can go. In previous years, the hike was much longer but the trailhead is now at an elevation of around 700m. From the end of the track, where there is a small warung, it is a long 8 or 9 hours to the crater rim. Because the trail starts at quite a low elevation, the first few hours of hiking through jungle are hot and sweaty. There is a source of clean water about an hour from the start of the trail.

There are plenty of sandy areas suitable for camping near the top but be warned it can get quite windy and difficult to keep tent pegs firmly held in place. The crater rim is one of the world’s most fascinating places and the views at sunset over Gunung Rinjani (Lombok) are fabulous. As for the incredible size of the crater itself, photos cannot really do it justice. The highest point is on the western edge of the crater and is marked with a cairn and Indonesian flag. Be careful when walking out there because certain areas are not stable and there are one or two fairly deep rock trenches.

The route up is the best route back down again – fast hikers will be down at the trailhead in 6 hours.

This trail can be combined with the Pancasila route as they meet on the crater rim near the summit.

A third route leads up from the south at Doroncanga (41m) and depending on the vehicle, the quality of trail and the weather you may be able to reach quite high up the side of the volcano in a truck, 4WD or on a trail bike – as far as Pos 3 according to some reports. Be aware that water is hard to find on this route so be sure to bring plenty and assume none available on the trail.

Although the true summit is almost impossible to reach from this southern side of the rim, this trail has an advantage for those who have gotten permission to spend an extra day or two descending into Tambora’s crater itself! The best route down appears to be from less than 1 kilometre west (left) of where the trail reaches the rim and leads via cliffs (1,770m) before reaching the vast caldera floor (1,404m). Such an expedition is only possible for the very experienced who have already sought permission from local officials.

There are other official routes in from Kawinda To’i in the north and Piong in the east. 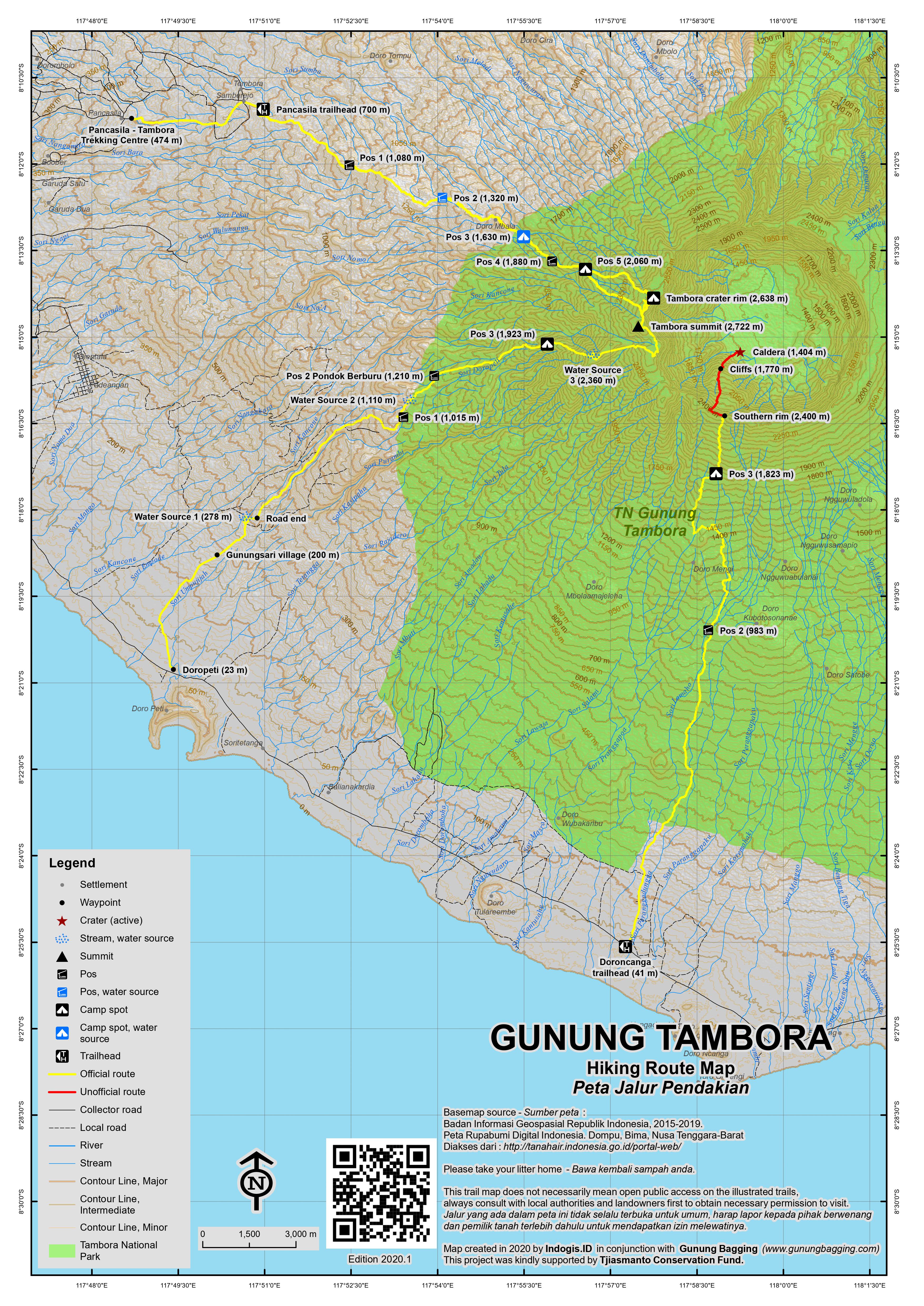