The starting point for Talakmau (previously known as Mount Ophir in Dutch times and now spelt simply ‘Talamau’ by most local people) is the friendly village of Pinagar which is less than 30 minutes drive from Simpang Empat. The mountain is actually has two very separate peaks, with the much lower and more mysterious Gunung Pasaman (2,174m) lying around 3 kilometres south-west of Talakmau peak.

The climb is considerable when considering the low starting point (274m). There are many lakes near the summit and and the Rajawali Putih camp area is on the edge of one of the larger lakes. The trail is pretty clean – thanks to local volunteers who keep it in good condition. You will need 3 full days of hiking (2 nights camping) to reach the summit and get back down – ideally 4 days with 3 nights on the mountain for those with sufficient time.

It is possible to arrange trailbikes from Pinagar up through the palm oil plantation and fields of corn as far as Pos Harimau (682m). Although this saves a couple of hours you will still probably need 3 full days for this mountain to do it justice and have enough time to explore the summit area so it isn’t of huge benefit. Thankfully there are plenty of water sources close to the trail so you only really need to worry about taking enough up with you for the first day (plus a bit extra in case of emergency).

The 7/8 km trail up to Pos Harimau is very clear but muddy and slippery after rain – it’s the main, wide track which leads right up the hillside and it takes about three hours to reach the entrance to the forest on foot. There are plenty of basic wooden houses by the side of the track and one particularly friendly family (at around 600m) will probably offer you a drink. The views here are rather nice – lots of small, shapely little hills to the northwest. The last wooden house (750m) is just before the entrance to the forest (823m) which is the most complicated section in terms of staying on the right track. About one hundred metres into the forest you need to take a right turn which drops down to a small stream before leading up to a junction (where you turn left) and then winds through rather tedious high-growing undergrowth for about 30 minutes. About halfway along this section is a right turn and it is here that you first start to see ‘puncak’ signs but don’t be fooled – it is still a very long way!

About two hours after entering the forest you should have reach the first major camping area – Pos Rindu Alam ‘missing nature’ (1,120m – ignore the elevation figures on red and white signs put up in 2013 by a local hiking club as they are inaccurate). There is a river down to the right of the trail and a pool large enough for bathing here. However the flat area for pitching tents is very muddy and – worse still – is right in the middle of an area of the mountain which is simply crawling with leeches. Therefore unless you have started the hike quite late is it not advisable to camp here as another 3 hours and you will be at Pos Bumi Sarasah (1,895m). Bumi Sarasah also has a river (down to the left) but it also has a few leeches too. It’s terribly muddy but is probably about as high up the mountain as you will get on Day 1 (assuming you are carrying camping equipment with you). Look for the face that somebody has carved into the tree between the signs here.

The trail continues steeply after Bumi Sarasah and you will probably not encounter any leeches at all after 2,000m unless they have hitched a ride up the mountain with you! An hour after Bumi Sarasah and you will start to be able to look back at the view northwest to the coast and northern mountains (around 2,150m) . There is also a small camping spot suitable for two tents (2,175m). Another hour and you will be at Pos Paninjauhan (2,563m, ‘distant view’). It is around this area that the trail gets a little difficult as there are lots of rocks which you need to climb over and narrow streams to wade through. This is more than made up for by the excellent views back down to the villages below. There are also quite a few rare pitcher plants in this area.

Another hour and you will be on the flat marshy plateau following the trail as it weaves between different lakes of various shapes, sizes and colour. There are apparently twelve lakes up here in total. After reaching the very pleasant Pos Rajawali Putih (2,776m ‘white eagle’?)  it is just 30 minutes further on up to the true high point of the mountain itself. The trail is well marked with yellow paint on rocks but take extra care on the descent in poor weather as it would be easy to head down the wrong side of the mountain. The highest point is crowned with a carin and a metal rod and mosque roof thing. In clear weather the views are magnificent – the many lakes just below the summit and Gunung Marapi near Bukittinggi in the distance.

There is another route down the mountain on the other side but it took the group of local hikers that opened it 7 days to do so. Therefore it’s probably best to return the same way. If you managed to coax your porters up to the Rajawali Putih campsite then you can expect a long hike back off the mountain the following day of perhaps 9 -11 hours. Those who have camped lower down will have a shorter return journey but will perhaps have the leeches to deal with once again. The ideal camp spots would be Bumi Sarasah and Rajawai Putih but if you get off to a slow start on the first day then perhaps Rindu Alam and Paninjauan would be a second choice (though the latter has space for just 2 large or 3 small tents). 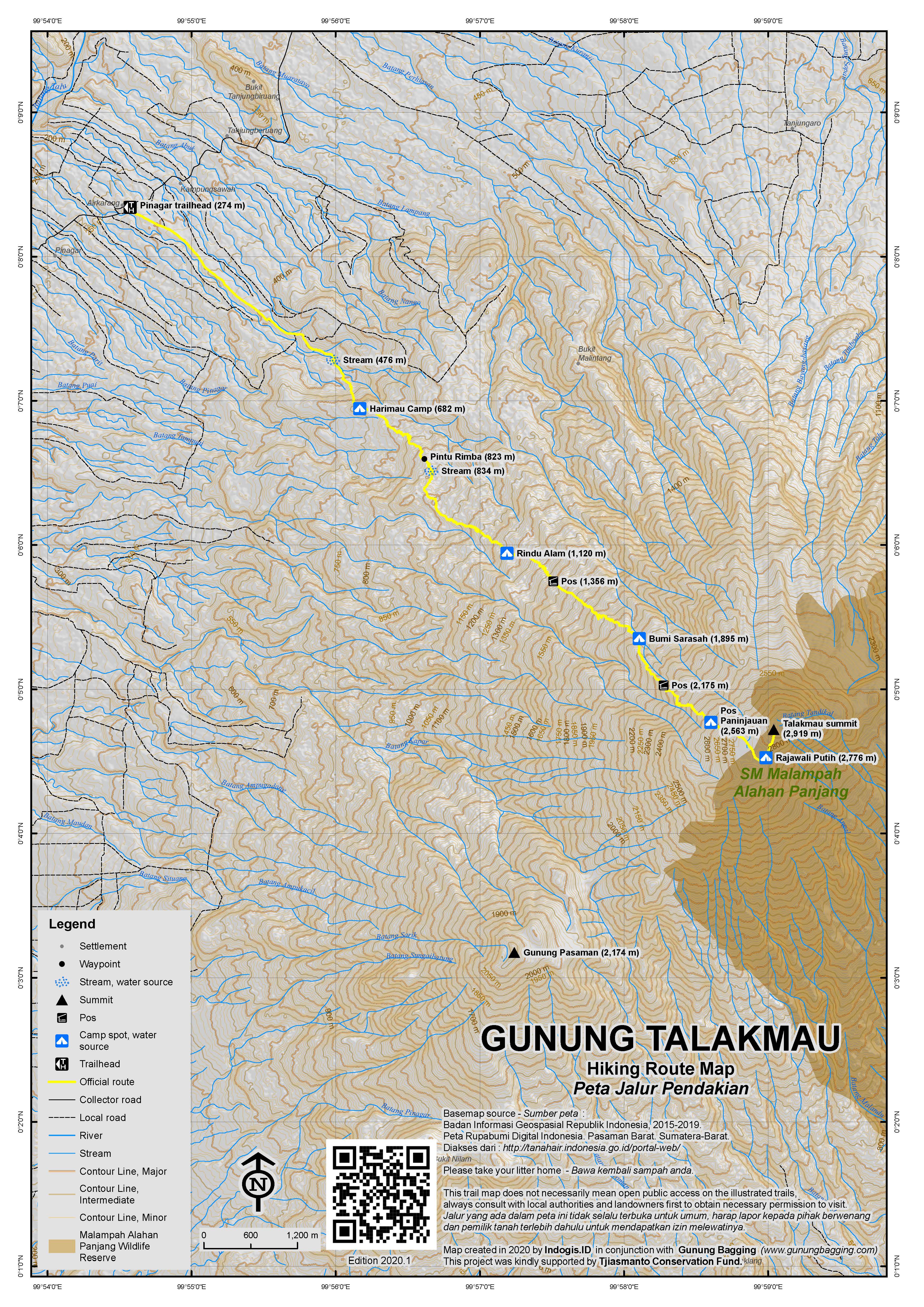