Slamet is one of Java’s more active volcanoes and there is almost always lots of gas around at the crater. It can also get very windy on the slopes so choose your camping spot wisely and whatever you do, do not even think about camping at the summit area because of the dangerously large amount of gases. Those wishing to reach the true summit are advised to hike up from one of the routes in from the east such as Bambangan, Dipajaya or Gunung Malang because it will bring you out at the higher edge of the crater.

There are many hiking routes and they are all long and it is hard to estimate exactly how long each one takes as it will vary greatly from person to person. Suffice to say that you will need at least one night on the mountain unless you climb at night which is not normally recommended. The most enjoyable thing to do is to ascend one way and descend another way. However, please bear in mind that guides from one side of the mountain will be much less familiar with other routes.

Two similar routes from the south lead up from the mountain resort of Baturraden (just 680m above sea level) near Purwokerto but have been closed in the past due to too many hikers becoming lost and are currently less popular. When open, it is perhaps the easiest place to arrange public transport to and from due to its close proximity to the small city of Purwokerto, but given the low starting point it is a tough trek up and it’s perhaps better to descend this way and ascend via another trail with a higher trailhead.

Guci route (NORTH-WEST): There are two popular routes from from the north-west at the popular weekend retreat of Guci where there is decent accommodation and hot springs. Each route is connected to a different basecamp. Both trails start at around 1,250m and are very accessible from Tegal and the north coast. There are plenty of buses running between Guci and Tegal but remember to agree on a fare before you board or else you may well be expected to pay substantially more than the going rate – especially if you are foreign-looking. A taxi from Tegal railway station should take just over one hour.

Guci Kompak route: From the bend in the road just above Guci market, the trail leads up through woodland and dense foliage. It is well-marked with Pos markers nailed to trees and also red and orange ribbons tied to small branches on the higher slopes. However, initially the narrow trail has a broken asphalt surface. At approximately 1,399m the trail branches – take the left. The trail branches yet again at 1,540m. Once again, take a left to find Pos 1 Pinus (1,550m). The trails leads up to Pos 2 Cemara (1,850m), Pos 3 Pasang (2,129m) and Pos 4 Kematus (2,578m). There are small flat areas suitable for camping at most of the Pos. Near Pos 4 there is a good camping area on the left beyond which is a small trail leading down to a nearby water source – don’t rely on finding water here though. The first building of any description is a small shelter called Pondok Edelweiss at 2,675m which is soon followed by Pos 5 Cantigi (2,852m).

Bambangan route (EAST): Probably the best route for the summit of Slamet starts from the east of the mountain at Bambangan (at roughly 1,510m). It can be reached by public transport from Purwokerto in 90 minutes. At the end of the road, there is a small registration building on the left where you register and pay a small fee. If you haven’t already made arrangements, guides should be easily arranged here. The trail leads up through vegetable plantation and pine woodland. Once out of the farmland the trail is clear and well-defined but the numbering of posts (Pos) is rather unusual and many of them do not have a visible number. After about 90 minutes there is a newly-built hut which is Pos 1 Pondok Gembirung (1,947m) and would be a great place to stay if making a late start.

Behind the red hut the trail continues to lead up the mountain and it is less than an hour via Pos 6 Samyang Katebonan (2,908m) to a similar shelter building – painted black. This is known as Pos 7 Samyang Kendil (3,057m) and lies just below the treeline. In good weather, this is the first place where you can really begin to admire the views. The small Serayu Mountains and the south coast of Java are often visible from here. There are many flat areas where you can pitch a tent and if you are the first to reach Pos 7 you could even pitch it inside the shelter building for added protection from any wind and rain. It can take anything from 6 to 8 hours to reach this shelter. It is by far the best place to camp if you want to climb to the summit for dawn because the summit lies at this side of the mountain.

It is about two hours up steep, loose rock to the crater lip and summit ridge. The trail passes Pos 8 Samyang Jampang (3,090m) and Pos 9 Palawangan (3,170m). Note that this Palawangan on the north-east side of the crater is very different to the similarly-named Plawangan on the south-west side of the crater beyond where the Baturaden and Kaliwadas trails meet. Gloves and a torch you can attach to your head would be very useful here so that you can use both hands.

The last huge explosion occurred here in July 1988 and there are frequent fatalities usually due to the toxic gases. The summit ridge itself is usually reasonably safe but it is not a good idea to linger too long near the complex crater area and active fumaroles which are about 1km further west. Note that the summit is known locally as Puncak Soerono /Surono after a hiker who died here several decades ago. There used to be a memorial (‘tugu’) but it is not clear if it still exists due to eruptions.

At the top is an old cement pillar – presumably a triangulation pillar – and a new triangular monument dedicated to the students who lost their lives up here more recently. Because of Slamet’s isolation, there are few nearby mountains to admire but in good weather Gunung Ciremai should be visible to the north-west and the huge twins of Sumbing and Sindoro should be seen in the distance to the east. To descend, return the same way, or if you have experienced guides and wish to descend via an alternative route continue beyond the crater area and make sure you are on the correct, well-defined path down to your chosen destination.

Kaliwadas route (WEST): There is a newer route still growing in popularity from the west side at Kaliwadas (1,750m), best accessed from Bumiayu where there is a train station. It leads via Tuk Suci (1,840m), Pondok Growong (1,960m), Taman Wlingi (1,950m), Pos 4 Igir Manis (2,615m) and Pos 5 Igir Tjowek (2,755m) and meets the Baturaden trail at Plawangan (2,973m) which is the preferred camping spot. This may be the easiest for those wishing to hike Gunung Slamet in a regular weekend from Jakarta. We hope to report on it in 2020…. 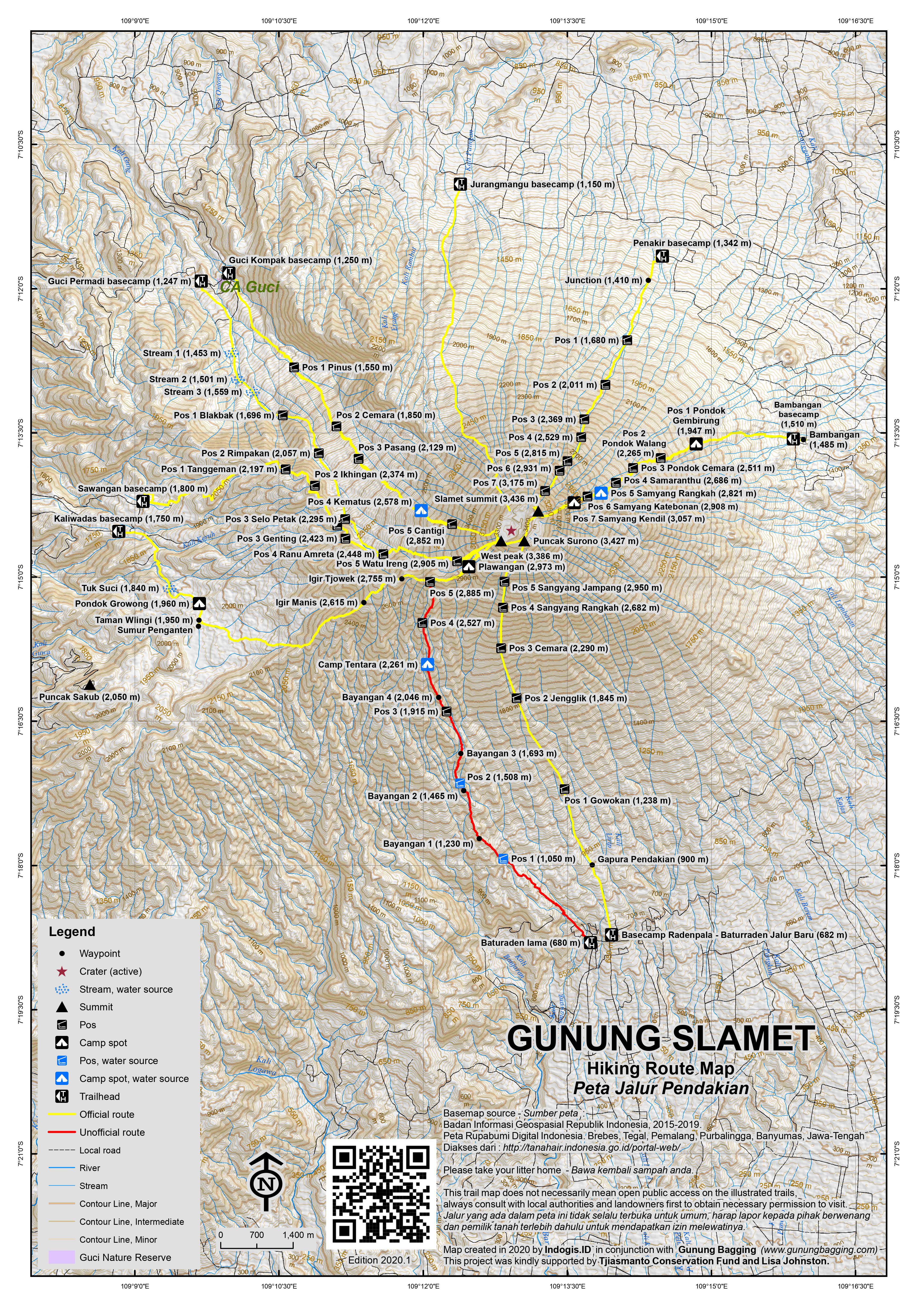